INTRODUCTION: Free radicals play a major role in the development of chronic and degenerative diseases such as cancer, arthritis, autoimmune disorders, aging, cardiovascular and neurodegenerative diseases 1-3. Imbalance in the formation and neutralization of free radicals generates a condition called oxidative stress, which affect the cell membranes and major biomolecules 4-6.  Oxygen free radical can initiate peroxidation of lipids, which in turn stimulates glycation of protein, inactivation of enzymes and alteration in the structure and function of collagen basement and other membranes, and play a role in the long-term complication of diabetes 7, 8.

Antioxidants are radical scavengers which are an important in the prevention of human diseases. Naturally occuring antioxidants possess the ability to reduce the oxidative damage associated with many diseases 9-11.  These natural antioxidants may have free radical scavengers, reducing agents, potential complexes of pro-oxidant metals, quenchers of singlet oxygen etc.12. Antioxidant compounds like phenolic acids, polyphenols and flavanoids scavenge free radicals such as peroxide, hydroperoxide or lipidperoxyl and thus inhibit the oxidative mechanism that lead to degerative diseases 13.

The plant based antioxidants can be derived from any part of plant’s like bark, leaves, flowers, roots, fruits etc that is any part of the plant may contain active compounds 14. Therfore, the importance of search for natural antioxidants has greatly increased in recent years. The researchers have focused on natural antioxidants and numerous crude extracts and pure natural compounds have been reported to possess antioxidant properties 15.   In the current study, in – vitro experiments were conducted to determine antioxidant effect of methanolic extract of Drynaria quercofolia rhizome.

Drynaria quercifolia (Asvakatri) belongs to the Family of Polypodiaceae is found throughout India, especially in the plains or very low down in the mountains, on trees or rocks. South China, Malaysia and Tropical Australia. It is an epiphytic fern with short thick fleshy creeping rhizome. Traditionally, the fronds of plant are reported to be used by tribal communities of Tamil Nadu and Kerala in treatment of diverse ailments including typhiod fever, chronic jaundice. It is used as an antiinflammatory and antifertility agent 16-19. Rhizome decoction or drink of Drynaria quercifolia used as an antipyretic preparations20. Various phytochemicals like friedelin, epifriedeinol, β amyrin, β-sitosterol, 3-β-glucobyranoside and naringin has been isolated from the plant 21.

The rhizome of Drynaria quercifolia linn were collected from Kollimalai, Namakkal district, Tamil Nadu, India. The collected samples were carefully kept in polythene bags. These plant samples were authenticated by Dr. S. Johnbritto, The Director, The Rabinet Herbarium Centre for Molecular Systematic, St. Joseph’s College, Tiruchirappalli and a voucher specimen was deposited in the department of Biochemistry, S.T.E.T Women’s College, Mannargudi (Voucher No:001).

Processing and preparation of plant extract:

The rhizome is covered with small brown coloured hair like strutures. They were removed using sterile scalpel and washed with sterile distilled waer. They were cut into small pieces and dried in shade and made into coarse powder, using blender, and stored in air tight containers. 50g rhizome powder of Drynaria quercifolia was weighed and macerated in methanol in the ratio of 1:6. They were kept at room temperature for 72 h. The mixture was stirred every 24h using a sterile glass rod. Then it was filtered through the Whatmann No: 1 filter paper. Extraction procedure was done further twice for complete extraction of bioactive compounds. The obtained filtrate was combined together and concentrated in vacuum using rotary evaporated. The dried residue was used for evaluating invitro antioxidant activity.

Methanolic extract of Drynaria quercifolia was tested for its free radical scavenging property using different invitro models. Standard ascorbic acid was also analysed to compare the efficacy on antioxidant activity of plant extract. All the experiments were performed thrice and the results averaged.

For total antioxidant capacity assay, 1ml of the plant extract at different concentration (100, 200, 300 µg/ml) were dissolved in water and mixed with 3ml of reagent solution (0.6 M sulfuric acid, 28mM sodium phosphate and 4mM ammonium molybdate) in Eppendorf tube. The tubes were capped and incubated in a thermal block at 95°C for 90 min. After 90 min, the mixture was cooled to room temperature, the absorbance was measured at 695nm against reagent blank. Ascorbic acid was used as the standard and the total antioxidant capacity is expressed as equivalents of ascorbic acid 22.

Nitric oxide radicals were generated from sodium nitro prusside solution at physiological pH. Sodium nitro prusside (1 ml of 10Mm) was mixed with 1ml of plant extract of different concentrations (100, 200 and 300µg/ml) in phosphate buffer (pH 7.4). The mixture was incubated at 25ºC for 150min. To 1ml of the incubated solution, 1ml of Griess’ reagent (1% sulphnilamide, 2% o-phosphoric acid and 0.1% naphthyl ethylene diamine dihydrochloride) was added. Absorbance was read at 546nm and percentage inhibition was calculated24.

A solution of H2O2 was prepared in phosphate buffer (pH7.4). H2O2 concentration was determined spectrophotometrically by measuring absorption with extinct coefficient for H2O2. Methanolic extract of plant (100, 200, 300 µg/ml) in distilled water was added in H2O2 solution (0.6 ml, 40µM/). After 10 min, absorbance of  H2O2 was  measured at 230 nm against blank solution containing the phosphate buffer without H2O2. The % of scavenging effect of   extracts and standard ascorbic acid were calculated 25.

RESULTS AND DISCUSSION: Free radicals are chemical entries that can exist separately with one or more unpaired electrons. The propagation of these radicals can bring about thousands of reactions and thus may cause extensive tissue damage. Lipids, proteins and DNA are all susceptible to attack by free radicals 26, 27.  Antioxidants may offer resistance against oxidative stress by scavenging the free radicals, inhibiting lipid peroxidation etc. In the present study, in vitro antioxidant activity of methanolic extract of Drynaria quercifolia rhizome were analysed by various in vitro models. Results were compared with standard ascorbic acid.

Total antioxidant capacity by Phosphomolybdenum method assay has been routinely used and it is based on the reduction of Mo (VI) to Mo (V) by the sample analyte and the subsequent formation of green phosphate/Mo (V) complex at acidic pH. The phosphomolybdenum method is quantitative since the total antioxidant activity is expressed as the number of equivalents of ascorbic acid14. 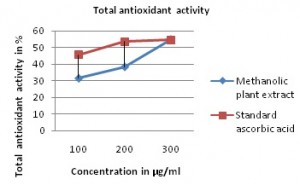 The reducing ability of the extract served as a significant indicator of its potential antioxidant activity of plant extract and standard ascorbic acid were used at dose range of 100-300μg/ml (Table 2). The reducing power of extract increased at the concentration of 300μg/ml (58.07 %) and for standard ascorbic acid, reducing power was 62.80% at 300μg/ml. IC50 value of plant extract and standard drug were found to be 230µg and 220µg respectively.

The reducing capacity of a compound may serve as a significant indicator of its potential antioxidant activity. The reducing ability is generally associated with the presence of reductones, which breaks the free radical chain by donating a hydrogen atom 28.

In the present study, the extract exhibited a moderate reducing power which was comparably less than that of the standard ascorbic acid. 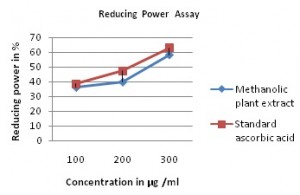 Incubation of solutions of nitroprusside in phosphate buffer saline at 250C for 150min resulted in generation of NO. The plant extracts at various concentrations effectively reduced the NO generation. Scavenging activity was dose dependent and shown in Table 3. Extract showed potent nitric oxide scavenging (62.77%) at 300μg/ml where as ascorbic acid showed 54.60% at 300μg/ml. IC50 value for both plant extract and standard were found to be 180 and 240μg/ml respectively.

Nitric Oxide (NO) is an important chemical mediator generated by endothelial cells, macrophages, neurons etc and involved in the regulation of various physiological prosesses 29. Excess concentration of NO is associated with several diseases 30, 31. Oxygen reacts with the excess nitric oxide to generate nitrite and peroxynitrate anions, which act as free radicals 26, 32.  In the present study, the extract competes with oxygen to react with nitric oxide and thus inhibit the generation of the anions.

Hydrogen peroxide itself is not very reactive, but it may be toxic to cell due to increase in hydroxy1 radical concentration in the cells 33. Thus removal of H­­­­2­O2 ­­­as well as O2 leads to survival of the cell life and its components. In the present study, the scavenging ability of extract on H­­­­2­O2 is comparably less potent than standard ascorbic acid. 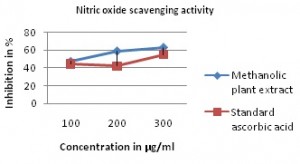 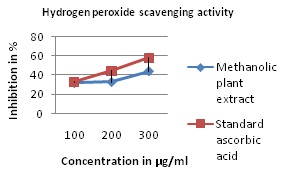 CONCLUSION: This study has demonstrated the antioxidant effects of methanoilc extract of Drynaria quercifolia rhizome. The extract showed concentration dependent activity in all the models. These findings suggest that this plant is a potential souece of natural antioxidant that could have great impoatance as therapeutic agents for various diseases.