ABSTRACT: The plant Hugonia mystax L., is a woody evergreen liana belonging to the family Linaceae, locally knows as Modirakanni. Ethnobotanically the tender fruits were used for rheumatism and biological activities like antimicrobial were reported. Present study find outs the scientifically evidence of fruits of Hugonia mystax for its antioxidant property. The different extract of fruits was obtained by successive extraction with petroleum ether, chloroform and ethanol by soxlet method.  These extracts were taken for an in- vitro antioxidant study, was carried out by using various in vitro antioxidant screening models like DPPH radical scavenging activity, total phenolic content was determined. The successive plant extract showed good dose dependent activity by inhibiting DPPH and total phenolic content. Antioxidant activity of fruits showed a greater free radical sequestering activity. In the present study, ethanol extract showed a greater antioxidant activity was found to be 1000 µg/mL expressed as significant antioxidant activity of Hugonia mystax. This might be due to the presence of phytocompounds flavonoids, phenols, saponins, steroids, tannins and terpenoids present in the preliminary phytochemical screening.

INTRODUCTION: Oxidative stress has been implicated in the pathology of many diseases such as inflammatory conditions, cancer, diabetes and aging 1. Free radicals induced by peroxidation have gained much importance because of their involvement in several pathological conditions such as atherosclerosis, ischemia, liver disorder, neural disorder, metal toxicity and pesticide toxicity 2. Together with other derivatives of oxygen, they are inevitable by products of biological redox reactions 3. Antioxidants are added as redox systems possessing higher oxidative potential than the drug that they are designed to protect or as chain inhibitors of radical inducted decomposition.

In general, the effect of antioxidants is to break up the chains formed during the propagation process by providing a hydrogen atom or an electron to the free radical and receiving the excess energy possessed by the activated molecule 4. Antioxidants may offer resistance against the oxidative stress by scavenging the free radicals, inhibiting the lipid peroxidation and by other mechanisms and thus prevent disease 5. It has been suggested that fruits, vegetables, natural plants contain a large variety of substance called phytochemicals which are present in plants and are the main source of antioxidant in the diet, which could decrease the potential stress caused by reactive oxygen species.

The natural antioxidants may have free-radical scavengers, reducing agents, potential complexers of prooxidant metals, quenches of singlet oxygen etc. 6. The antioxidants can interfere with the oxidation process by reacting with free radicals 7. Recently interest has increased considerably in finding natural occurring antioxidants for use in foods or medicinal materials to replace synthetic antioxidants which are being restricted due to their side effects such as carcinogenicity 8. Antioxidants principles from natural resources possess multifacetedness in their multitude and magnitude of activity and provide enormous scope in correcting imbalance 9. Food industry uses natural antioxidants as a replacement of conventional synthetic antioxidants 10

The plant Hugonia mystax L., is a woody evergreen liana belonging to the family Linaceae, locally knows as Modirakanni. Ethnobotanically, Kani tribals of Tirunelveli district in Tamil Nadu prepared a paste of leaves and tender fruit mixed with honey, used twice a day for 12 days for the treatment of rheumatism 11. Biological activities such as antimicrobial studies and preliminary phytochemical studies reported that the presence of various classes of secondary metabolites such as flavonoids, Phenols, saponins, steroids, tannins and terpenoids 12 this report confirmed antioxidant potential of fruits of Hugonia mystax. After the scrutiny of literatures, so far no work has been carried out regarding antioxidant activity of fruits of selected plant. Hence in the present study, the antioxidant activity of fruits of Hugonia mystax L. was done.

The plant material (fruits) of Hugonia mystax L., were collected from the Marakanam Reserve forest of Villupuram district, Tamil Nadu. The plant material was botanically identified by using the Flora of Presidency of Madras 13. An Excursion Flora of Central Tamil Nadu 14 and the confirmation were engaged at French Institute Herbarium (HIFP), Puducherry. The herbarium specimen was prepared and deposited at the Department of Botany, Kanchi Mamunivar Centre for Post Graduate Studies, Lawspet, Puducherry for further reference.

Preparation of the plant extracts:

The collected fruit materials were shade-dried and coarsely powdered using a pulverizor. The coarse powders were subjected to successive extraction with organic solvents of increasing polarity such as petroleum ether, chloroform and ethanol by Soxhlet method. The extracts were collected and distilled off on a water bath at atmospheric pressure and the last trace of the solvents was removed in vacuo and stored at 4o C. The resulted extracts were used for in vitro antioxidant activity.

DPPH is a free radical which when dissolved in ethanol has a blue-violet color.  When it reacts with the reducing agent, the solution loses colour indicates radical scavenging activity of test material 15. 3mL of 60µM DPPH in ethanol was added to different concentrations of extracts (10-1000µg/mL) and then incubated at room temperature for 15minutes.  Absorbance was read at 517 nm using a spectrophotometer (Simtronics, India). The percentage of DPPH radical scavenging activity was calculated by comparing the absorbance values of control not treated with the extract. Ascorbic acid used as a positive control. All determinations were performed three times and the results were expressed as a mean ± S.E.M.

The amount of total phenolics was measured using the Folin-Ciocalteu reagent method 16.  One milliliter of extracts was taken into test tubes and mixed with 1 mL 95% ethanol, 5 mL distilled water and 0.5mL 1N Folin-Ciocalteu reagent.  After 5 min, 1 mL of 5% Na2CO3 was added and the reaction mixture was allowed to stand for 60 min before the absorbance at 725 nm was measured.  A standard curve was established for each assay using 50-500 µg of gallic acid in 95% ethanol and expressed as gallic acid equivalent (GAE) (milligram of gallic acid equivalent/gram of various extracts).

All the extract showed concentration dependent activity in various extracts. The results of antioxidant activity were given here as follows (Table 1).

All the values are expressed as mean ± S.E.M. 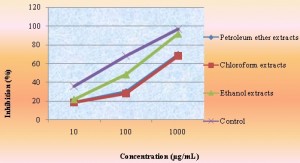 DISCUSSIONS: Plants produce significant amount of antioxidants to prevent the oxidative stress caused by photons and oxygen, they represent a potential source of new compounds with antioxidant activity 17. High levels of free radicals or active oxygen species create oxidative stress, which leads to a variety of biochemical and physiological lesions and often results in metabolic impairment and cell death 18. There is continuing interest on the screening of medicinal plants with a view to determine new sources of natural antioxidants 19, 20. Thus, continued research is being undertaken all over the world on different plant species and their therapeutic principles 21.

Several Indian medicinal plants have been extensively used slowing the process of aging and related disorders. Several such plants have already been highlighted for their antioxidant activity such as Emblica officinalis, Curcuma longa, Mangifera indica, Sandalum album, Withania somnifera, etc. 22. Active principles have been isolated from the plants, e.g. Mangiferin, from Mangifera indica L.; Emblicanin A & B, two tannins from Phyllanthus emblica L. 23; and Curcumin, a well-known compound isolated from C. longa L. 24.

Hugonia mystax, an important Indian medicinal plant, fruits was tested for the first time in the present study, to their free radical scavenging activity and total phenol content method in vitro. The H. mystax fruits showed a greater free radical sequestering activity. However, flavonoid and phenolic class of compound were observed in the extract which posses greater antioxidant activity. In the present study, ethanol extract showed a greater antioxidant activity which may be attributed to the presence of flavonoid compound quercetin. The compound quercetin is well known for its antioxidant activity 25-27. In addition, these results indicate that all the extracts have a noticeable effect on the scavenging of free radicals.

This activity also increases with increasing concentration. The extracts of these plants can be regarded as promising candidates for a plant-derived antioxidant compound. Similar study was also reported in leaves of Annona species 28, bark of Diospyros malabarica 29, Zingiber officinale 30 etc. This study reveals that H. mystax offer an interesting source of new antioxidative plant extracts being a potential for their use in different fields (foods, cosmetics, pharmaceuticals). Future studies will be aimed at investigating the effects of ethanol extracts of fruits on the regulation of cellular mechanisms and upon isolating and identifying the substances responsible for the antioxidant effects of the plant extracts.

CONCLUSION: From the above results, it can be concluded that ethanolic extracts of fruits of Hugonia mystax showed the most potent in vitro antioxidant activity with high percentage inhibition. This may be attributed due to the presence of plant secondary metabolites such as flavonoids, phenols, saponins, steroids, tannins and terpenoids which probably play a role as an effective free radical scavenger an effective antitumorous agent. This study supports the contention that traditional medicines remain a valuable source in the potential discovery of natural product pharmaceuticals. Significant antioxidant activity showed by Hugonia mystax provides a scientific validation for the traditional use of these plants. Further work on isolation and identification of active compounds and its efficacy needs to be done.

A. Vimalavady * and K. Kadavul