INTRODUCTION: Plants have become the basis of traditional medicine system throughout the world for thousands of years and continue to provide mankind with new remedies. In addition, plant based drugs remain an imp source of therapeutic agents because of their availability, relatively cheaper cost and non-toxic nature, when compared to modern medicine 1. Many medicinal plants contain active chemical constituents with high antioxidant property which plays an important role in the prevention of various degenerative diseases 2.

Antioxidants are vital substances which possess the ability to protect the body from damage caused by free radical induced oxidative stress. In fact, oxidative stress results from an imbalance between the generation of reactive oxygen species and endogenous antioxidant systems.ROS are major sources of primary catalysts that initiate oxidation in- vivo and in- vitro and create oxidative stress which results in numerous diseases and disorders 3, 4 such as cancer 5, cardiovascular disease 6, neural disorders 7, Alzheimer’s disease 8, mild cognitive impairment 9, Parkinsons disease 10, alcohol induced liver disease 11, ulcerative colitis 12, ageing 13.

Thus, there is a need for more effective, less toxic and cost effective antioxidant. Medicinal plants appear to have these desired comparative advantages; hence the growing interest in natural antioxidants from plants 14.

The plant, Ougeinia oojeinensis (Roxb.) Hochr (Leguminosae) is known as Tinsa in Hindi and Rathadru in Sanskrit 15. According to the Ayurvedic text, bark and gum are astringent, haemostatic, antidiuretic, antidermatoses and rejuvenating. Therefore useful in oedema, leucoderma and other skin diseases. Internally, it is used in diarrheoa, blood disorders, skin diseases, and obesity 15, 16. The extract of the whole plant has shown anti-inflammatory activity 15. Preliminary phytochemical testing of 50% hydroethanolic extract of the stem bark of Ougeinia oojeinensis revealed the presence of flavonoids, saponins.

The aim of this study was to investigate the antioxidant properties of hydroethanolic extract of stem bark of Ougeinia oojeinensis (Roxb.) against the free radicals.

Preparation of Extract: The stem bark of the plant was shade dried and reduced to fine powder. This powdered bark was extracted with alcohol: water (1:1) in a Soxhlet extractor for 40 hours. The solvent was removed from the extract under vacuum rotator dryer. The dried extract was stored in dessicator and was used for preliminary phytochemical as well as pharmacological evaluation.

The Free Radical Scavenging Activity Assay (DPPH method): The antioxidant activity of the plant extracts and standard were assessed on the basis of the radical scavenging effect of the stable DPPH free radical17. About 10-100 μl of each extract or standard was added to 2 ml of DPPH (HiMedia Laboratories Pvt. Ltd., Mumbai) in methanol (0.33%) in a test tube. After incubation at 37oC for 30 minutes the absorbance of each solution was determined at 517 nm using spectrophotometer 11.

The corresponding blank readings were also taken and the remaining DPPH was calculated by using the following formula:

IC50 value is the concentration of the sample required to scavenge 50% DPPH free radical.

Reducing Power Assay: The reducing power of the extract of the stem bark of Ougeinia oojeinensis was determined according to the method of Oyaizu (1986) 18. Different concentrations of the HEBO (10–100 μg/ml) in 1.0 ml of deionised water were mixed with phosphate buffer (2.5 ml, 0.2 M, pH 6.6) and potassium ferrocyanide (2.5 ml, 1%). The mixture was incubated at 50oC for 20 min.

A portion of trichloroacetic acid (2.5 ml, 10%) was added to the mixture, which was then centrifuged at 3000 rpm for 10 min. The upper layer of the solution (2.5 ml) was mixed with distilled water (2.5 ml) and FeCl3 (0.5 ml, 0.1%) and the absorbance was measured at 700 nm and compared with standards. Increased absorbance of the reaction mixture indicated increased reducing power.

Free Radical Scavenging Activity: Figure 1 shows the dose-response curve of DPPH radical scavenging activity of HEBO, compared with ascorbic acid, as standard. At a concentration of 100μg/ml, the scavenging activity of methanol extract of stem bark was 81.07%, while at the same concentration, that of the standard ascorbic acid was 89.35%. IC50 values of extract and standard were 53.50μg/ml and 25.00μg/ml, respectively.

The effect of antioxidants on DPPH is thought to be due to their hydrogen donating ability 19. Though the DPPH radical scavenging abilities of the extract was less than those of ascorbic acid at 100μg/ml, the study showed that the extract has the proton-donating ability and could serve as free radical inhibitor or scavenger, acting possibly as primary antioxidant. 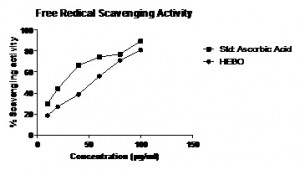 Reducing Power Assay: Figure 2 shows the reductive capabilities of the plant extract compared to ascorbic acid. The reducing power of the HEBO was very potent and the power of the extract was increased with quality of sample. The plant extract could reduce the most Fe3+ ions, which had a lesser reductive activity than the standard of ascorbic acid. Increased absorbance of the reaction indicated increased reducing power. 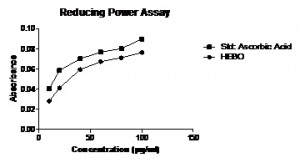 CONCLUSION: On the basis of the results obtained in the present study, it is concluded that the hydroethanolic extract of the stembark of Ougeinia oojeinensi, exhibits significant antioxidant and free radical scavenging activities. It also chelates iron and has reducing power. These in-vitro assays indicate that this plant extract is a significant source of natural antioxidants, which might be helpful in preventing the progress of various oxidative stress induced disorders. However, the components responsible for the antioxidant activity are currently unclear. Therefore, further investigations need to be carried out to isolate and identify the antioxidant compounds present in the plant extract.

Furthermore, the in vivo antioxidant activity of this extract needs to be assessed prior to clinical use.