INTRODUCTION:Antioxidants are a group of substances, which inhibit or delay oxidative processes. Most of the potentially harmful effects of oxygen are due to the formation and activity of a number of chemical compounds, known as reactive oxygen species (ROS), which have the tendency to donate oxygen to other substances. Many such reactive species are free radicals. Type of free radicals include the hydroxyl radical (OH), superoxide radical (O2), the nitric oxide radical (NO), and the lipid peroxy radical (LOO).

This oxidative damage is a decisive etiological factor concerned in quite a lot of chronic human diseases such as diabetic mellitus, cancer and also in the aging course 1.

Free radicals due to environmental pollutants, radiation, chemicals, toxins, deep fried and spicy foods as well as physical and mental stress, cause depletion of immune system antioxidants, change in gene expression and induce abnormal proteins. Due to these problems natural antioxidants as free radical scavengers may be necessary 2, 3, 4.

It has been mentioned the antioxidant activity of plants might be due to their phenolic compounds 2. Flavanoids are a group of polyphenolic compounds with known properties, which include free radical scavenging, inhibition of hydrolytic and oxidative enzymes and anti-inflammatory action 5.

The biological action of these compounds is related to their antioxidant activity 6. The rapid and sensitive for the antioxidant screening of plant extract is free radical scavenging assay using 1,1-diphenyl-2-picryl hydrazyl (DPPH) stable radical Spectrophotometrically (UV spectrophotometer, Shimadzu-UV-1601). Being presence of an antioxidant, DPPH radical obtains one more electron and the absorbance decreases 7. The majority of the antioxidant activity is due to the flavones, isoflavones, flavonoids, anthocyanin, coumarins, lignans, catechin and isocatechin 8.

In an effort to expand the spectrum of antioxidant agents from natural resources, Cordia dichotoma Forst. belonging to Boraginaceae family has been selected. While, the whole plant has antidiabetic & antileprotic activity 9, 10, 11, Cordia genus is reported for other activities like wound healing 12, anthelmintic 13, anti-inflammatory 14, gastro-protective and antiulcer 15 and antioxidant 16. Several research workers have reported the mentioned activities on the other plants belong to Boraginaceae family and other parts of plant except bark of Cordia dichotoma Forst. However, there is no scientific report on the bark of the plant Cordia dichotoma Forst. of same family .

Therefore, the objective of the present investigation was to explore its phytoconstituents and pharmacological activities, specifically for its antioxidant potential.

Plant Material: The plant Cordia dichotoma Forst. (Family: Boraginaceae) was collected from the local forest, Ghaziabad, Uttar Pradesh, India, in the month of May-June, 2012. The plant was identified from National Institute of Science Communication and Information Resources, New Delhi. A voucher specimen (NISCAIR/RHMD/ Consult/2012-13/2025/33) has been preserved in laboratory for further references. The bark was washed, dried at room temperature under shed and then grounded in a mill to a coarse powder.

Extraction of plant material: The powdered bark was subjected to successive soxhlet extraction using a series of solvents of increasing polarity starting from petroleum ether, ethyl acetate, and methanol respectively. The extracts were vacuum dried and the percentage yields of the extracts were 1.5%, 1.0%, 7.11%, respectively.

Preliminary phytochemical analysis: The phytochemical tests were performed using various reagents as described in table 1. The extract was tested for the presence of absence of alkaloids, glycosides, tannins, steroids, reducing sugars, proteins and amino acids, phenolic compounds and flavonoids (Table 1).

Acute toxicity study: The acute toxicity of methanol extract of Cordia dichotoma (MECD) was studied on swiss albino mice (40-45g) “Fixed dose procedure”-OECD 420. The Institutional Animal Ethical Committee permitted the use of the animals for this purpose.

DPPH radical scavenging activity of MECD extract: The stable 1, 1-diphenyl-2-picryl hydrazyl radical (DPPH) was used for determination of free radical scavenging activity of the MECD extract 7 The MECD extract was added at different concentrations (10-200 µg/mL) with an equal volume, to methanol solution of DPPH (100 um). After incubation for 15 minutes at room temperature, the absorbance was recorded at 517 nm. The experiment was carried out in triplicate. The IC50 value i.e. the concentration of sample required to scavenge 50% of stable DPPH free radicals was determined from the % inhibition vs. concentration of MECD extract curve by comparing the absorbance values of control (Ao) and test compounds (At) (table 2, fig. 1). 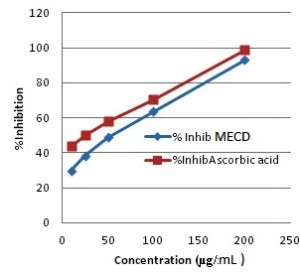 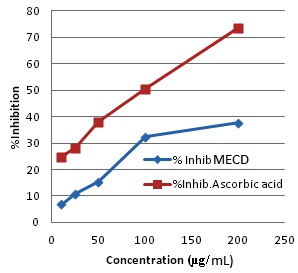 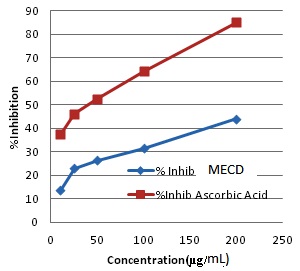 The percentage scavenging of hydrogen peroxide was calculated using the following equation:

The concentration of the extract was plotted against the % inhibition and IC50 value was determined.

Total Phenolic Content determination: Total phenolic content was estimated by the Folin-Ciocalteu method, based on the procedure suggested by Pourmorad et al 2006 21.

Then, 0.5 mL of plant extract or gallic acid (standard phenolic compound) was mixed with folin ciocalteu reagent (5mL) and aqueous Na2CO3 (4 mL, 1M). The mixture was allowed to stand for 15 min and the total phenols were determined by colorimeter at 765 nm. Gallic acid was used as a standard for calibration curve. Total phenol values were expressed in terms of mg equal gallic acid in 1 gm powder of dry plant (table 5, fig. 4). 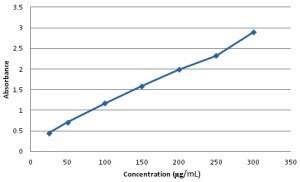 Total Flavonoids determination: Total flavonoids content of extract was determined by aluminium chloride method 21. Plant extract (0.5 mL) was mixed with 1.5 mL of solvent (methanol as MECD extract), 0.1 mL of 10% aluminium chloride, 0.1 mL of 1 M potassium acetate and 2.8 mL of distilled water. They were kept at room temperature for 30 min, the absorbance of the reaction mixture was measured at 415 nm with a spectrophotometer. Rutin was used as a standard for calibration curve. Total flavonoid values were expressed in terms of mg equal Rutin in 1 gm powder of dry plant (table 6, fig. 5). 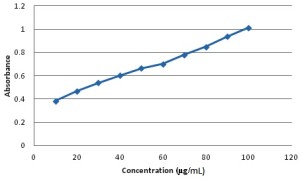 RESULT AND DISCUSSION: The acute toxicity study did not show any mortality of the experimental animals upto dose of 2000 mg/kg BW and hence, the methanol extract of the bark of Cordia dichotoma could be safely used upto that dose. The flavonoids, phenolic compounds, glycoside, reducing sugar, tannins, triterpenoids in the extract were identified by chemical tests (Table 1).

Many reports on flavonoids, triterpenoids, polyphenols indicated that they possess antioxidant activity 5. These phytoconstituents may exert multiple biological effects against tumor, heart disease, AIDS, and different pathologies due to their free radical scavenging activities 22.

A significant decrease in the concentration of DPPH radical was observed due to the scavenging ability of methanol extract. The antioxidant activity increased with increasing concentration of the extract, exhibited as an IC50 values (i.e the concentration of the extract that inhibit 50% free radicals) of 62.46 µg/mL. Whereas the reported IC50 value for standard (ascorbic acid) was 27.66 µg/mL 21. The extract significantly inhibited nitric oxide in a dose dependent manner with the IC50 being 254.13 µg/mL. This nitric oxide antioxidant activity could be attributed the presence of phenolic and polyphenolic compounds in the extract.

As shown, the extract also demonstrated hydrogen peroxide decomposition activity in a concentration dependent manner with an IC50 of 236.5 µg/mL. Similarly, the phenolic content and flavonoid content of the extract increased with increasing concentration exhibiting values i.e  48.75 µg/mL and 63.5 µg/mL respectively.

CONCLUSION: The present study suggested that Cordia dichotoma bark could be a potential source of natural antioxidant and thus could be useful as therapeutic agents in preventing or slowing the progress of aging,age-associated oxidative stresses-related degenerative diseases. The presence of the phytoconstituents such as flavonoids, tannins and phenolic compounds etc were found to be effective in such diseases. Further studies are required on Cordia dichotoma, for evaluating the pharmacological actions such as anticancer, antidiabetic, degenerative disorders, antiulcer and anti-inflammatory activities.