INTRODUCTION:Free radicals are defined as molecules having an unpaired electron in the outer orbit 1. They are generally unstable and very reactive. Examples of oxygen free radicals are superoxide, hydroxyl, peroxyl (RO2•), alkoxyl (RO•) and hydroperoxyl (HO2•) radicals. Nitric oxide and nitrogen dioxide (•NO2) are two nitrogen free radicals.

Oxygen and nitrogen free radicals can be converted to other non-radical reactive species, such as hydrogen peroxide, hypochlorous acid (HOCl), hypobromous acid (HOBr), and peroxynitrite (ONOO_).

Over the past three decades, the free radical theory has greatly stimulated interest in the role of dietary antioxidants in preventing many human diseases including cancer, atherosclerosis, stroke, rheumatoid arthritis, neurodegeneration, and diabetes 7-10.

In the search for sources of natural antioxidants and compounds with radical scavenging activity during recent years, some have been found, such as echinacoside in Echinaceae root, anthocyanins , phenolic compounds , water extracts of roasted Cassia tora, whey proteins 12, and thioredoxin h protein from sweet potato 13.

In the present study, different extracts of Solanum sisymbrifolium were investigated for their In-vitro antioxidant activity.

Preparation of extract fromof Solanum sisymbrifolium: The plant S. sisymbriolium was collected in the month of November, 2011 from Hanumadwake area, Visakhapatnam, Andhra Pradesh, India.  The plant material was taxonomically identified by Dr. M. Venkaiah, Botanist, Andhra University. Freshly collected plant material was dried under shade and milled to obtain a coarse powder.  To the coarse powder (500gms) four liters of ethanol (70%) was added and macerated for 5 days at room temperature (30°C).

The macerated extract was obtained and concentrated under vacuum at temperature of 45°C by using rotary evaporator (Buchi, Switzerland), dried completely and stored in desiccator. The 70%v/v ethanolic extract was then fractionated into hexane and ethyl acetate fractions.

Superoxide radical Scavenging activity 14, 15: Superoxide scavenging activity of the plant extract was determined by McCord and Fridovich method, 1969, which depends on light induced superoxide generation by riboflavin and the corresponding reduction of nitroblue tetrazolium. 0.1 ml of different concentrations of plant extract and 0.1 ml of 6 µM ethylenediamine tetraacetic acid containing NaCN, 0.1 ml of 50 µM nitroblue tetrazolium, 0.05 ml of 2 µM riboflavin were transferred to a test tube, and final volume was made up to 3 ml using phosphate buffer.

Then, the assay tubes were uniformly illuminated with an incandescent light (40 Watts) for 15 minutes and thereafter the optical densities were measured at 560 nm. A control was prepared using 0.1 ml of respective vehicle in the place of plant extract/ascorbic acid. The percentage inhibition of superoxide production was evaluated by comparing the absorbance values of control and experimental tubes.

DPPHradical Scavenging activity: The scavenging activity for DPPH free radicals was measured according to the procedure described by Braca 16 and Sanja 17.In DPPH assay, method is based on the reduction of alcoholic DPPH solution (dark blue in colour) in the presence of a hydrogen donating antioxidant converted to the non-radical form of yellow colored diphenyl-picrylhydrazine. Lower the absorbance higher the free radical scave-nging activity 18. An aliquot of 3 ml of 0.004% DPPH solution in ethanol and 0.1 ml of plant extract at various concentrations were mixed. The mixture was shaken vigorously and allowed to reach a steady state at room temperature for 30 min. Decolorization of DPPH was determined by measuring the absorbance at 517 nm. A control was prepared using 0.1 ml of respective vehicle in the place of plant extract/ascorbic acid.

Superoxide radical:   In the present study, ethanol, ethyl acetate and hexane extracts of S. sisymbrifolium aerial parts were found to possess concentration dependent scavenging activity on superoxide generated by photoreduction of riboflavin and the results are given in Table 1 and Fig. 1. 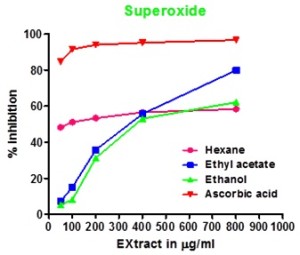 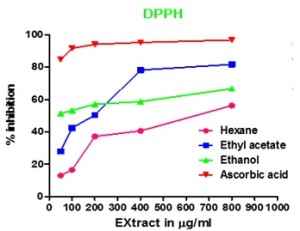 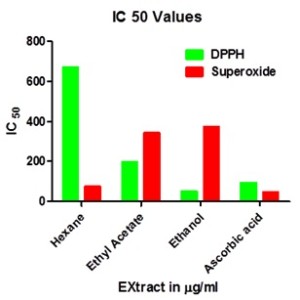 DISCUSSION: Phytochemicals, especially phenolics in fruits and vegetables, are suggested to be the major bioactive compounds for health benefits. Phenols have been found to be useful in the preparation of some antimicrobial and antioxidant compounds 19, 20.

The bioactivity of phenolics may be related to their ability to chelate metals, inhibit lipoxygenase, and scavenge free radicals 21, 22. The phytochemical analysis conducted on S. sisymbrifolium extracts revealed the presence of carbohydrates, alkaloids, steroids, phenols, Glycosides etc.

The presence of phenolic compounds in this plant may contribute to its antioxidative properties and thus the usefulness of these plants in herbal medicament.

The result of scavenging activity assay in this study indicates that the plant is potently active. This suggests that the plant extract contain compounds that are capable of donating hydrogen to a free radical in order to remove odd electron which is responsible for radical's reactivity. The plant extracts were capable of scavenging super oxide and DPPH in a concentration dependent manner.

CONCLUSION: Among the three extracts of S. sisymbrifolium, the hexane extract showed better activity than other extracts on the tested super oxide free radical. The order of activity is in the following manner: Ascorbic acid >hexane extract > ethyl acetate extract> ethanol extract.

Among the three extracts of S. sisymbrifolium, the ethanol extract showed better activity than other extracts on the tested   DPPH free radical. The order of activity is in the following manner: ethanol extract >Ascorbic acid > ethyl acetate extract > hexane extract.

ACKNOWLEDGMENT: This work was financially supported by the University Grants Commission (Grant No.F (II)/M.Pharmacy/2010-12) for the foundation project of M.Pharmacy. The authors were also thankful to College of Pharmaceutical Sciences, Andhra University for providing the facilities to carry out the present research work.