INTRODUCTION: Reactive oxygen species are involved in a number of degenerative diseases such as artherosclerosis, cancer, cirrhosis and diabetes 1, 2, 3, 4 and also in wound healing 5. Plant-derived antioxidants such as tannins, lignans, stilbenes, coumarins, quinones, xanthones, phenolic acids, flavones, flavonols, catechins, anthocyanins and proanthocyanins could delay or provide protection for living organisms from damage caused by uncontrolled production of reactive oxygen species (ROS) and the concomitant lipid peroxidation, protein damage, and DNA strand breaking 6 because of their redox properties, which allow them to act as hydrogen donors, reducing agents, free radical scavengers 6, 7.

They are also strong chelators of metal ions 8. Current interest is focused on the potential role of antioxidants and antioxidant enzymes in the treatment and prevention of atherosclerosis, heart failure, neurodegenerative disorders, aging, cancer, diabetes mellitus, and several other diseases 9.

Calotropis procera (R. BR.), a plant of family Asclepiadaceae, is well known for its medicinal as well as toxic properties. The plant produces milky white latex that exhibits pleiotropic effects in various animal models. On oral administration, the latex produces potent anti-inflammatory, analgesic, and weak antipyretic effects, while on local administration it induces intense inflammatory response. Even the accidental exposure to the latex produces contact dermatitis, keratitis, and toxic iridocyclitis. The acute inflammation induced by latex involves edema formation and cellular infiltration that has been attributed to the presence of histamine in the latex and the release of mast cell histamine.

Besides the latex has also been shown to induce prostaglandin (PG) synthesis through the induction of cyclooxygenase-2 (COX-2), both histamine and PGs are the key mediators in an inflammatory response and play a significant role in inflammatory hyperalgesia along with various other mediators. These inflammatory mediators activate local pain receptors (ie, nociceptors) and nerve terminals that produce hypersensitivity in the area of injury as observed in various inflammatory conditions.

Literature reviews indicated that no studies combining the antioxidant and cytotoxic activities of the root have so far been undertaken. Taking this in view and as part of our ongoing search on Bangladeshi medicinal plants10 the present study aimed at evaluating the antioxidant, and cytotoxic potential of the methanolic extract of Calotropis procera root.

Plant material: The root of the plant of Calotropis procera (R. BR.) was collected from the botanical garden of Pharmacy department of Bangladesh University, Bangladesh during December 2007. The plant material was taxonomically identified by the National herbarium of Bangladesh. A voucher specimen no. 32928 is maintained in our laboratory for future reference.

Preparation of plant extract: The plant material was shade-dried with occasional shifting and then powdered with a mechanical grinder, passing through sieve #40, and stored in a tight container. The dried powder material (650 g) was extracted with methanol for 72 h in a Soxhlet’s apparatus. The solvent was distilled under reduced pressure, and the resulting semisolid mass was vacuum dried using rotary flash evaporator to yield a solid residue (18.42% w/w). The preliminary phytochemical analysis was performed to identify the phytoconstituents present in the extract 11.

Free radical scavenging activity measured by 1, 1-diphenyl-2-picryl-hydrazyl: The free radical scavenging activity of the extracts, based on the scavenging activity of the stable 1,1-diphenyl-2- picrylhydrazyl (DPPH) free radical was determined by the method12 Plant extract (0.1 ml) was added to 3ml of a 0.004% MeOH solution of DPPH. Absorbance at 517nm was determined after 30 min, and the percentage inhibition activity was calculated from; [(A0–A1)/A0] x 100, Where A0 is the absorbance of the control, and A1 is the absorbance of the extract/ standard. IC50 was calculated from equation of line obtained by plotting a graph of concentration versus % inhibition.

Brine Shrimp Lethality Bioassay: The cytotoxic activity of the plant was evaluated using Brine Shrimp lethality bioassay method 13 (Mayer et al., 1982) where 6 graded doses (viz. 5 µg/ml, 10 µg/ml, 20 µg/ml, 50 µg/ml, 100 µg/ml, 200 µg/ml) were used. Brine shrimps (Artemia salina Leach) nauplii Ocean 90, USA were used as test organisms. For hatching, eggs were kept in brine with a constant oxygen supply for 48 hours. The nature nauplii were then used in the experiment. DMSO was used as a solvent and also as a negative control. The median lethal concentration LC50 of the test sample after 24 hours was obtained by a plot of percentage of the dead shrimps against the logarithm of the sample concentration. Vincristine sulfate was used as a reference standard in this case.

Statistical analysis: The data is expressed as a mean ± SEM of three experiments.

RESULTS AND DISCUSSION: The qualitative chemical analysis of the root of the plant of Calotropis procera (R. BR.) showed the positive result for the presence of glycosides, flavonoids, reducing sugar, gums and steroids. Antioxidant methods have been proposed to evaluate antioxidant characteristics and to explain how antioxidants function.

Effect on scavenging of DPPH radical: DPPH is a stable free radical that accepts an electron or hydrogen radical to become a stable diamagnetic molecule 14. The absorption maximum of a stable DPPH radical in methanol was at 517 nm. The decrease in absorbance of DPPH radical is caused by antioxidants, because of the reaction between antioxidant molecules and radical progresses, results in the scavenging of the radical by hydrogen donation. Hence, DPPH is usually used as a substrate to evaluate the antioxidative activity of antioxidants 15. Figure 1 illustrates percent (%) of inhibition with increasing the concentration of methanolic extract of Calotropis procera root and standard (Ascorbic acid). IC50 values of Calotropis procera root and ascorbic acid were 500 and 1.13 μg/ml, respectively. 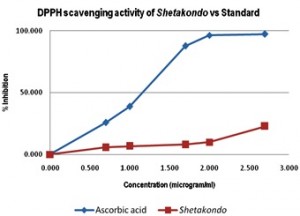 Assay for cytotoxicity of Calotropis procera root extract: A general Brine shrimp lethality assay, used to measure the cytotoxicity of plant extract and also an indicative of cytotoxicity, antibacterial activities, pesticidal effects and various pharmacologic actions. In cytotoxicity, the extract was highly effective and showed an LC50 value of 2.931μg/ml whereas 0.3229μg/ml was observed for vinvristine sulfate. An extract having LC50 below 30 μg/ml is generally considered as a potent bioactive extract. It also indicates that the plant extract, perhaps, possess the potentials to kill cancer cells as well as to kill pests 16.

These activities may lead to conclude the presence of secondary metabolites responsible for showing such biological effects. Table 1 illustrates percent (%) of mortality with increasing the concentration of methanolic extract of Calotropis procera root and standard (Vincristine Sulphate). LC50 values of Calotropis procera root and Vincristine Sulphate were 2.931 and 0.3229 μg/ml, respectively.

TABLE 1: ILLUSTRATES PERCENT (%) OF MORTALITY WITH INCREASING THE CONCENTRATION OF METHANOLIC EXTRACT OF CALOTROPIS PROCERA ROOT AND STANDARD (VINCRISTINE SULPHATE)