INTRODUCTION: Reactive oxygen species are involved in a number of degenerative diseases such as artherosclerosis, cancer, cirrhosis and diabetes 1, 2, 3, 4 and also in wound healing 5.  Plant-derived antioxidants such as tannins, lignans, stilbenes, coumarins, quinones, xanthones, phenolic acids, flavones, flavonols, catechins, anthocyanins and proanthocyanins could delay or provide protection for living organisms from damage caused by uncontrolled production of reactive oxygen species (ROS) and the concomitant lipid peroxidation, protein damage, and DNA strand breaking 6 because of their redox properties, which allow them to act as hydrogen donors, reducing agents, free radical scavengers 7, 8. They are also strong chelators of metal ions 9. Current interest is focused on the potential role of antioxidants and antioxidant enzymes in the treatment and prevention of atherosclerosis, heart failure, neurodegenerative disorders, aging, cancer, diabetes mellitus, and several other diseases 10.

Costus speciosus (Koen.) Smith belongs to the family Costaceae, widely distributed in Bangladesh, India and some other tropical countries. Diosgenin is the principle constituent of its rhizome and widely used as starting material in the commercial production of steroidal hormones. The rhizomes are useful in vitiated conditions of kapha and pitta, burning sensation, flatulence, constipation, helminthiasis, leprosy, skin diseases, fever, hiccough, asthma, bronchitis, inflammation and anemia. It is used to make sexual hormones and contraceptives. Alkaloids of Costus speciosus have been shown anticholinersterase activity in both in vitro and in vivo study 11. Peroral administration of Costus speciosus aqueous extract have significant hypoglycemic effects with a simultaneous glucose load 12. Literature reviews indicated that no studies combining the antioxidant and cytotoxic activities of the rhizome have so far been undertaken. Taking this in view and as part of our ongoing search on Bangladeshi medicinal plants 13 the present study aimed at evaluating the antioxidant, and cytotoxic potential of the methanolic extract of Costus speciosus rhizome.

Plant material: The rhizome of the plant of Costus speciosus was collected from the botanical garden of Pharmacy department of Jahangirnagar University, Bangladesh during January 2008. The plant material was taxonomically identified by the National herbarium of Bangladesh. A voucher specimen no. 33165 is maintained in our laboratory for future reference.

Preparation of plant extract: The plant material was shade-dried with occasional shifting and then powdered with a mechanical grinder, passing through sieve #40, and stored in a tight container. The dried powder material (650 g) was extracted with methanol for 72 h in a Soxhlet apparatus. The solvent was distilled under reduced pressure, and the resulting semisolid mass was vacuum dried using rotary flash evaporator to yield a solid residue (18.42% w/w). The preliminary phytochemical analysis was performed to identify the phytoconstituents present in the extract 14.

Determination of total antioxidant capacity: The antioxidant activity of the extracts was evaluated by the phosphomolybdenum method 15. The assay is based on the reduction of Mo(VI)–Mo(V) by the extract and subsequent formation of a green phosphate/Mo(V) complex at acid pH 0.3 ml extract was combined with 3 ml of reagent solution (0.6M sulfuric acid, 28mM sodium phosphate and 4mM ammonium molybdate). The tubes containing the reaction solution were incubated at 950C for 90 min. Then the absorbance of the solution was measured at 695 nm using a spectrophotometer (Shimadzu, UV-150-02) against blank after cooling to room temperature. Methanol (0.3 ml) in the place of extract is used as the blank. The antioxidant activity is expressed as the number of equivalents of ascorbic acid using the following formula:

Nitric oxide radical scavenging assay: The procedure is based on the method, where sodium nitroprusside in aqueous solution at physiological pH spontaneously generates nitric oxide, which interacts with oxygen to produce nitrite ions that can be estimated using Greiss reagent. Scavengers of nitric oxide compete with oxygen leading to reduced production of nitrite ions. For the experiment, sodium nitroprusside (10mM) in phosphate buffered solution (pH 7.4) was mixed with different concentrations of methanol extract of Costus speciosus dissolved in methanol and incubated at room temperature for 150 min.

The same reaction mixture without the methanol extract but the equivalent amount of methanol served as the control. After the incubation period, 0.5 ml of Griess reagent (1% sulfanilamide, 2% H3PO4 and 0.1% N-(1- naphthyl) ethylenediamine dihydrochloride was added. The absorbance of the chromophore formed was read at 546 nm.17 The antioxidant activity of the extracts was expressed as IC50. As like DPPH method IC50 was calculated from equation of line obtained by plotting a graph of concentration (μg/ml) versus % inhibition.

The amount of phenolic compounds and flavonoids: The total phenolic content of plant extracts was determined using Folin–Ciocalteu reagent 18.  Costus speciosus plant extracts (100 µl) were mixed with 500 µl of the Folin–Ciocalteu reagent and 1.5 ml of 20% sodium carbonate. The mixture was shaken thoroughly and made up to 10 ml using distilled water. The mixture was allowed to stand for 2 h. Then the absorbance at 765 nm was determined. These data were used to estimate the phenolic contents using a standard curve obtained from various concentration of gallic acid (GAE). Total content of phenolic compounds in plant methanol extracts in gallic acid equivalents (GAE) was calculated by the following formula:

The flavonoids content was determined by aluminium chloride colorimetric method19 was modified from the procedure reported by Woisky and Salatino. Quercetin was used to make the calibration curve. The different concentration of plant extract (0.5 ml) were separately mixed with 1.5 ml of 95% ethanol, 0.1 ml of 10% aluminum chloride, 0.1 ml of 1M potassium acetate and 2.8 ml of distilled water. After incubation at room temperature for 30 min, the absorbance of the reaction mixture was measured at 415 nm with a Shimadzu UV-160A spectrophotometer (Kyoto, Japan). The amount of 10% aluminum chloride was substituted by the same amount of distilled water in blank. All determinations were carried out in duplicates. These data were used to estimate the flavonoid contents using a standard curve obtained from various concentration of quercetin. The content of flavonols, in quercetin equivalents was calculated by the following formula:

Brine Shrimp Lethality Bioassay: The cytotoxic activity of the plant was evaluated using Brine Shrimp lethality bioassay method 20 (Mayer et al., 1982) where 6 graded doses (viz,. 5mg/ml, 10mg/ml, 20mg/ml, 50mg/ml, 100mg/ml, 200mg/ml) were used. Brine shrimps (Artemia salina Leach) nauplii Ocean 90, USA were used as test organisms. For hatching, eggs were kept in brine with a constant oxygen supply for 48 hours. The nature nauplii were then used in the experiment. DMSO was used as a solvent and also as a negative control. The median lethal concentration LC50 of the test sample after 24 hours was obtained by a plot of percentage of the dead shrimps against the logarithm of the sample concentration. Vincristine sulfate was used as a reference standard in this case.

Statistical analysis: The data is expressed as a mean ± SE of three experiments.

RESULTS AND DISCUSSION: The qualitative chemical analysis of the rhizome of Costus speciosus showed the positive result for the presence of glycosides, flavonoids, triterpenoids, tannins, and steroids. Antioxidant methods have been proposed to evaluate antioxidant characteristics and to explain how antioxidants function.

Effect on total antioxidant activity: The antioxidant activity due to the presence of phytoconstituents such as flavonoids and biflavones has been reported 21. The yield of the methanol extract of Costus speciosus rhizome and its total antioxidant capacity are expressed as the number of equivalents of ascorbic acid (Table 1). The phosphomolybdenum method was based on the reduction of Mo (VI) to Mo (V) by the antioxidant compound and the formation of a green phosphate/ Mo (V) complex with a maximal absorption at 695 nm.

The assay is successfully used to quantify vitamin E in seeds and, being simple and independent of other antioxidant measurements commonly employed, it was decided to extend its application to plant extracts 15. The study reveals that the antioxidant activity of the extract is in the increasing trend with the increasing concentration of the plant extract.

Effect on scavenging of DPPH radical: DPPH is a stable free radical that accepts an electron or hydrogen radical to become a stable diamagnetic molecule 22. The absorption maximum of a stable DPPH radical in methanol was at 517 nm. The decrease in absorbance of DPPH radical is caused by antioxidants, because of the reaction between antioxidant molecules and radical progresses, results in the scavenging of the radical by hydrogen donation. Hence, DPPH is usually used as a substrate to evaluate the antioxidative activity of antioxidants 23. Figure 1 illustrates percent (%) of inhibition with increasing the concentration of methanolic extract of Costus speciosus rhizome and standard (Ascorbic acid). IC50 values of Costus speciosus rhizome and ascorbic acid were 50.38 and 33.32 μg/ml, respectively. 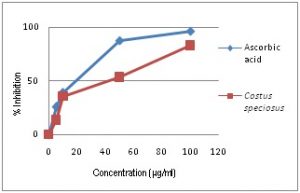 Effect on nitric oxide (NO·) scavenging activity: Nitric oxide and superoxide anion cause ischemic renal injury separately, and these radicals work together to bring about further damage. The toxicity and damage caused by NO• and O•−2 is multiplied as they react to produce reactive peroxynitrite (ONOO−), which leads to serious toxic reactions with biomolecules such as protein, lipids, and nucleic acids 24. Suppression of NO• released may be partially attributed to direct NO• scavenging, as all concentrations of Costus speciosus rhizome decreased the amount of nitrite generated from the decomposition of sodium nitroprusside in vitro. A nitric oxide radical generated from sodium nitroprusside at physiologic pH was found to be inhibited by Costus speciosus rhizome. Figure 2 illustrates the percentage inhibition of nitric oxide production and it is observed that scavenging of nitric oxide by the extract is concentration dependent. Ascorbic acid and quercetin were used as a reference compound. The concentration of Costus speciosus rhizome necessary for 50% inhibition was found to be 97.74 μg/mL. However, 18.63 μg/mL, and 15.97 μg/mL was required for ascorbic acid and quercetin respectively. The extract showed significant level of inhibition of nitric oxide production by activated peritoneal macrophages with in vitro conditions. 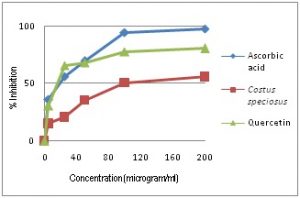 Effect of total phenolic compounds: Phenolic constituents are very important in plants because of their scavenging ability due to their hydroxyl groups.25 A number of studies have focused on the biological activities of phenolic compounds, which are potential antioxidants and free radical scavengers.9 In addition, it has been reported that phenolic compounds are associated with antioxidant activity and play an important role in stabilizing lipid peroxidation 26.

Flavonoids, the most important and most diverse natural phenolics 27 have divers’ chemical and biological activities including radical scavenging properties. Therefore, the content of both groups are determined in the extracts (Table 1). The content of total phenolics in the extracts of Costus speciosus rhizome is determined using the Folin–Ciocalteu assay, calculated from regression equation of calibration curve (y = 0.013x + 0.127, r2 = 0.988) and is expressed as gallic acid equivalents (GAE) and the flavonoid contents of the rhizome extract in terms of quercetin equivalent (the standard curve equation: y = 0.009x – 0.036, r2 = 0.979).

Assay for cytotoxicity of Costus speciosus rhizome extract: A general Brine shrimp lethality assay, used to measure the cytotoxicity of plant extract and also an indicative of cytotoxicity, antibacterial activities, pesticidal effects and various pharmacologic actions. In cytotoxicity, the extract was highly effective and showed an LC50 value of 31.55µg/ml whereas 0.25 µg/ml was observed for vinvristine sulfate.  The results of cytotoxic activity are presented in table 2. An extract having LC50 below 30 µg/ml is generally considered as a potent bioactive extract.  It also indicates that the plant extract, perhaps, possess the potentials to kill cancer cells as well as to kill pests 28. These activities may lead to conclude the presence of secondary metabolites responsible for showing such biological effects.