ABSTRACTAverrhoa bilimbi Linn. (Family: Oxalidiaceae) is a medicinal plant which is extensively used in traditional medicine to cure cough, cold, itches, boils, rheumatism, syphilis, diabetes, whooping cough, and hypertension. In this study, hydromethanolic extract of A. bilimbi fruits was examined for its antioxidant action using 1, 1-diphenyl-2-picrylhydrazyl (DPPH) radical scavenging and total antioxidant capacity. Total phenol and flavonoid contents of the extract were also estimated. Moreover, brine shrimp lethality bioassay was used to investigate the cytotoxic potential of A. bilimbi. The extract exhibited strong DPPH radical scavenging activity with and IC50 value of 20.35μg/ml as opposed to the IC50 value of the reference standard, ascorbic acid (12.6μg/ml). It also displayed remarkable total antioxidant capacity (417.093±6.577mg/g in ascorbic acid equivalent (AAE)). Total phenol and total flavonoid contents of the extract were 106.16±2.818 mg/g in gallic acid equivalent (GAE) and 276.73±25.25 mg/g in quercetin equivalent (QE), respectively. A. bilimbi fruit extract also showed strong cytotoxic potential with an LC50 value of 5.011μg/ml in brine shrimp lethality bioassay. Our results suggest that, in addition to having cytotoxic potential, A. bilimbi fruits are rich in polyphenolic antioxidants with strong radical scavenging capacity

INTRODUCTION:Different cellular and extracellular macromolecules such as proteins, lipids, and nucleic acids are damaged through oxidative stress resultant from the tipping of balance toward prooxidant status.  Age-related diseases include macular degeneration, cancer, coronary heart disease and neurodegenerative disorders such as Alzheimer’s disease is the effect of cellular damage because of the production of reactive oxygen species (ROS) 1, 2.It is generally assumed that frequent consumption of plant-derived phytochemicals from vegetables, fruits, tea, and herbs may contribute to shift the balance toward an adequate antioxidant status. Currently, the possible toxicity of synthetic antioxidants has been criticized 3. Medicinal plants with a long history of use in treating cancer are overplaying an integral role in cancer chemotherapy in recent years. Of all available anticancer drugs between 1940 and 2002, 40% were natural products or natural product-derived with another 8% considered natural product mimics 4.

Averrhoa bilimbi Linn. is a member of the family Oxalidiaceae. A. bilimbi (cucumber tree – in English) fruits are commonly known as “pickle fruit” and in Bengali well-known as“bilimbi”. The tree is attractive, long-lived and ever green reaches 16 to 33 ft (5-10 m) in height; has a short trunk soon dividing into a number of upright branches. Probably, A. Bilimbi originates on Moluccasin Indonesia. This plant is also cultivated or found semi-wild throughout Indonesia, Philippines, Sri Lanka, Bangladesh, Myanmar (Burma) and Malaysia 5, 6.

Alongside a comprehensive literature search revealed that A. bilimbi leaves has been subjected for preliminary phytochemical screening and has varying degrees of antimicrobial activity and mild to moderate cytotoxic activity 7, 8. In Asia, A. bilimbi is used as traditional medicine for treating cough, cold, itches, boils, rheumatism, syphilis, diabetes, whooping cough, and hypertension 9.

Natural products are indispensable resources in the discovery of lead compounds for the development of drugs for the treatment of human diseases. Among these resources, plants have been widely studied for the discovery of different therapeutic classes of chemical entities 4, 10.From this point of view still large number of plants are unexplored in Bangladesh. Considering the importance of this area and as a part of our ongoing investigation on local medicinal plants of Bangladesh 11, in this paper, we reported a study of the antioxidant and cytotoxic activity A. bilimbi fruits.

Plant Material: The fruits of A. bilimbi were collected in July 2009 from Chittagong, and were identified by experts in Bangladesh National Herbarium, Mirpur, Dhaka where a voucher specimen (Accession No. 34207) representing the collection has been retained for future reference.

Extraction:The fruits were cut into small pieces, dried in hot air oven at 60◦C for 2 days and at 40oC for the next 3 days to make them suitable for grinding. Then the grinded powder of fruits (200g) was extracted in soxhlet apparatus at elevated temperature (65oC) using 70% methanol. Then the extracts were filtered through a fresh cotton bed. The solvent from the filtrate was then evaporated to have gummy concentrate of the crude extract. The dried crude extract obtained was used for investigation.

Phytochemical Screening: The freshly prepared crude extract was qualitatively tested for the presence of chemical constituents. These chemicals were identified by characteristic color changes using standard procedures described in elsewhere 7.

DPPH Free Radical Scavenging Activity:The free radical scavenging activity of the extract, based on the scavenging activity of the stable 1, 1- diphenyl-2- picrylhydrazyl (DPPH) free radical, was determined by the method described by Braca 12. Plant extract (0.1 ml) was added to 3ml of a 0.004% methanol solution of DPPH. Absorbance at 517nm was taken after 30 min, and the percentage inhibition activity was calculated from [(A0–A1)/A0] ×100, where A0 is the absorbance of the control, and A1 is the absorbance of the extract/ standard. The inhibition curves were prepared and IC50 values were calculated.

Determination of total antioxidant capacity:The total antioxidant activity of the extract was evaluated by the phosphomolybdenum method according to the procedure of Prieto et al. 1999 13. 0.3 ml extracts were combined with 3ml of reagent solution (0.6M sulfuric acid, 28mM sodium phosphate and 4mM ammonium molybdate). The tubes containing the reaction solution were incubated at 95°C for 90 min. Then the absorbance of the solution was measured at 695 nm using a spectrophotometer against blank after cooling to room temperature. The antioxidant activity is expressed as the number of equivalents of ascorbic acid.

Total Phenol Content Determination:To measure total phenol content of plant extract, extract (100μL) was mixed with 500μL of the Folin–Ciocalteu reagent and 1.5 mL of 20% sodium carbonate. The mixture was shaken thoroughly and made up to 10 ml using distilled water. The mixture was allowed to stand for 2 h. Then the absorbance at 765 nm was determined. These data were used to estimate the phenolic contents using a standard curve obtained from various concentration of gallic acid 14.

Total Flavonoid Content Determination:The total flavonoid content was estimated using a method previously described by Kumaran and Karunakaran. 2007 15, using quercetin as a reference compound. 1mL of plant extract in methanol (50-250μg/mL) was mixed with 1mL aluminium trichloride in ethanol (20mg/mL) and a drop of acetic acid, and then diluted with ethanol to 25 mL. The absorption at 415nm was read after 40 min. Blank samples were prepared from 1ml of plant extract and a drop of acetic acid, and then diluted to 25 mL with ethanol. The absorption of standard quercetin solution (0.5mg/mL) in ethanol was measured under the same conditions. All determinations were carried out in duplicates.

These data were used to determine the flavonoid content using a standard curve obtained from various concentration of quercetin.

Cytotoxic Activity Test:Brine shrimp lethality bioassay was used for probable cytotoxic action 16, 17. The eggs of Brine shrimp (Artemia salina Leach) were collected and hatched in a tank at a temperature around 37°C with constant oxygen supply. Two days were allowed to hatch and mature the nauplii. Stock solution of the sample was prepared by dissolving required amount of extract in specific volume of pure dimethyl sulfoxide (DMSO). 4 ml of seawater was given to each of the vials. Then, specific volumes of sample were transferred from the stock solution to the vials to get final sample concentrations of 1.25, 2.5, 5, 10, 20, 40, 80, 160 and 320μg/ml. In the control vials same volumes of DMSO (as in the sample vials) were taken. With the help of a Pasteur pipette 10 living nauplii were put to each of the vials. After 24 h the vials were observed.

Most of the tannins and flavonoids are phenolic compounds and may be responsible for antioxidant properties of many plants 19, 20. 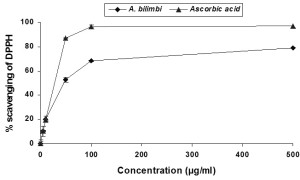 FIGURE 1: DPPH RADICAL SCAVENGING ACTIVITY OF THE HYDROMETHANOL EXTRACT OF A. BILIMBI.

Values are the average of duplicate experiments and represented as mean±SD. 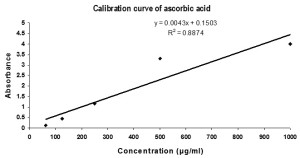 In the past few years, there has been growing interest in the involvement of reactive oxygen species (ROS) in several pathological situations. The oxidation induced by ROS can result in cell membrane disintegration, membrane protein damage and DNA mutation, which can further initiate or propagate the development of many diseases, such as cancer, liver injury and cardiovascular disease (Liao & Yin, 2000). Therefore, antioxidants with free radical scavenging activities may have great relevance in the prevention and treatment of diseases associated with oxidants or free radicals.

It is mentioned earlier that the phytochemical screening of the extract revealed the presence of flavonoid, tannin and reducing sugar. The investigation also shows the presence of high content of flavonoid and phenolic compounds. Polyphenolic compounds, like flavonoids, tannins and phenolic acids, commonly found in plants have been reported to have multiple biological effects, including antioxidant activity. Flavonoids and tannins present in the plant extract, as evident from phytochemical screening, may be responsible for the antioxidant action in the tested models 1. The result of total phenol content of the plant extract is presented in the Table 3. The result is expressed as the number of gallic acid equivalents per gram of the plant extract. The plant extract was found to contain large amount of phenolic content. 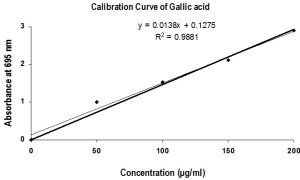 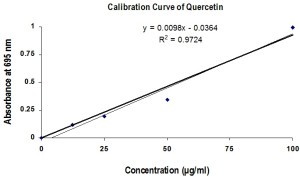 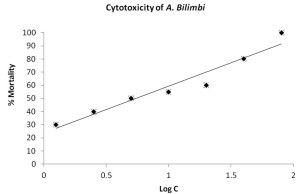 FIGURE 5: GRAPHICAL PRESENTATION OF CYTOTOXICITY OF THE HYDROMETHANOL EXTRACT OF A. BILIMBI FRUITS TOWARD BRINE SHRIMP NAUPLII

CONCLUSION: In light of the results of the present study, it can be concluded that the plant extract possesses antioxidant and cytotoxic potential. The findings of the investigation also provide further support to and reinforce the traditional use of the plant in different disorders where free radicals are implicated. In addition, positive result in cytotoxic activity test led us to the inference that the plant extract may contain bioactive compounds which may aid ongoing anticancer drug discovery from floristic resources.

Hence, further studies are suggested to be undertaken to pinpoint the exact compound(s) and to better understand the mechanism of such actions scientifically.