The present study was undertaken to evaluate the in vitro antioxidant activities of hexane, ethyl acetate and methanolic extracts of Holostemma ada kodien root tubers. The above extracts exhibited a dose dependent scavenging activity against DPPH radicals, Superoxide radicals, and Nitric oxide radicals. Further, the MeOH, EtOAC extracts showed relatively higher reducing power compare to that of BHT. TLC of the above extracts using the DPPH as a spraying reagent revealed yellow spots against purple background indicating the presence of potent antioxidant compounds.

INTRODUCTION: Hyperphysiological burden of free radicals causes imbalance in homeostatic phenomena between oxidants and antioxidants in the body. This imbalance leads to oxidative stress that is being suggested as the root cause of aging and various human polygenic diseases like atherosclerosis, stroke, diabetes, cancer, and neurodegenerative diseases such as Alzheimer’s disease and Parkinsonism 1.

Reactive oxygen species (ROS) and reactive nitrogen species (RNS) are various forms of activated oxygen and nitrogen, which include free radicals such as super oxide ions (O2), hydroxyl (OH) and nitric oxide radicals (NO) as well as non- free radicals such as hydrogen peroxide (H2O2) and nitrous acid (HNO2) 2, 3, 4. ROS can readily react with and oxidize most bio molecules, such as carbohydrates, proteins, lipids and DNA. The importance of ROS and free radicals has attracted an increasing attention over the past decade 5, 6, 7. There is a crucial balance between the generation of ROS and inac­tivation of ROS by the antioxidant system in organisms. Under pathological conditions, excessive production of ROS causes oxidative stress and macromolecular damage including protein oxidation and lipid peroxidation 8, 9. Malonaldialdehyde is inferred to be cytotoxic and it has been found at elevated levels in various diseases thought to be related to free radical damage 10, 11, 12. Therefore, current research has been focused on the use of antioxidants, with reemphasis on naturally-derived antioxidants, which may inhibit ROS production and display protective effects.

Antioxidants can neutralize the ill effects of free radicals by scavenging or chain breaking (like vitamin A, C, beta carotene, etc.) or some other mechanism of action. These antioxidants must be constantly replenished since they are “used up” in the process of neutralizing free radicals 13. Current research into free radicals has confirmed that foods rich in antioxidants play an essential role in the prevention of cardiovascular diseases and cancers 14. Many synthetic antioxidants such as butylated hy­droxyanisole (BHA), butylated hydroxytoluene (BHT), propyl gallate and tert-butyl hydroquinone have been shown to have some adverse effects including liver dam­age and carcinogenesis 15, 16. Therefore, there is a grow­ing interest on natural additives as potential antioxidants in reducing free radical-induced tissue injury. Numerous plant products have been screened and shown to have an­tioxidant activity due to the presence of antioxidant vitamins, flavonoids, and polyphenolic compounds.

Medicinal plants have been used traditionally to treat a variety of disease conditions that are now being explained by the oxidative stress theory. Holostemma ada-kodien is an important medicinal plant belonging to the family Asclepiadaceae, it was also called Jivanti, Arkapushpi, Kshira, Dodi, Suryavalli and is widely distributed in the Tropical rain forests in India 17, 18. The plant is used for maintaining youthful vigor, strength and vitality 19. The root tubers of the plant are used as tonic, ophthalmic, alterant, stimulant, aphrodisiac expectorant and gallactagogue 20. The terpenoid sugars present in the root tubers of the plant responsible for the medicinal properties 21. There is a huge demand for the root tubers of Holostemma and more than 150 tons of root tubers are required every year in the South Indian pharmacies.

Collection of the Plant Material: Roots of Holostemma ada-kodien were collected from the Tirumala hill region and were shade dried, powdered and stored in desiccators and powder of root material was subjected to solvent extraction.

Preparation of Extracts: 100g of fine powder was taken and soxhlated for 6-8hrs initially with hexane followed by ethyl acetate and methanol. The filtrate was distilled and concentrated under reduced pressure in the Buchi rotavapour R-200 and finally freeze dried to dense residues. The yields of the extracts were 4.2g (w/w), 3g (w/w) and 4.9g (w/w) for hexane, ethyl acetate and methanol respectively. The hexane extract was obtained in the form of oil. All the extracts were preserved in a refrigerator till further use. Preliminary phytochemical analysis was carried out in all the 3 extracts by different methods of phytochemical analysis 22.

Antioxidant Activity: The following methods were used to evaluate antioxidant activity of the above 3 extracts.

DPPH Radical Scavenging Activity: The hydrogen atom or electron donation abilities of the corresponding extracts were measured from the bleaching of the purple-colored methanol solution of 2, 2’-diphenly-1-picrylhydrazyl (DPPH). This spectrophotometric assay uses the stable radical DPPH as a reagent 23. 1ml of various concentrations of the extracts (25, 50, 75, 100 and 250μg/ml) in methanol were added to 4ml of 0.004% (w/v) methanol solution of DPPH. After a 30 min incubation period at room temperature, the absorbance was read against blank at 517nm. The ability to scavenge DPPH radical was calculated by the following equation;

Nitric Oxide Scavenging Activity: Nitric oxide scavenging activity was measured by slightly modified methods 24, 25. Nitric oxide radicals (NO) were generated from sodium nitroprusside. 1ml of sodium nitroprusside (10mM), 1.5 ml of phosphate buffer saline (0.2M, pH7.4) was added to the different concentrations (25, 50, 75 and 100μg/ml) of the plant extracts and incubated for 150 min at 25oC. After incubation, 1ml of the reaction mixture was treated with 1ml of Griess reagent (1% sulfanilamide, 2% H3PO4 and 0.1% napthalenediamine dihydrochloride). The absorbance of the chromatophore was measured at 546nm. Butylated hydroxy toluene (BHT) was used as a standard. The nitric oxide scavenging activity (%) was calculated by the following equation.

Superoxide Anion Scavenging Activity: Measurement of superoxide anion scavenging activity of Holostemma ada-kodien was done based on the Nishimiki method 26. About 1 ml of Nitroblue tetrazolium (NBT) solution (156μM NBT in 100mM Phosphate buffer, pH 7.4) and 0.1 ml of sample solution of Holostemma ada- kodien (100, 250, 500μg/ml) in methanol were mixed. The reaction was started by adding 100μl of phenazine methosulphate (PMS) solution (60μM PMS in100mM Phosphate buffer, pH 7.4) to the mixture. The reaction mixture was incubated at 25oC for 5 min, and the absorbance of the reaction mixture was measured at 560 nm to study the superoxide anion scavenging activity. Ascorbic acid was used as a positive control.

Reducing Power: The reducing power was determined according to the method of Oyaizu 27. Different concentrations of plant extracts (25, 50, 250 and 500μg/ml) prepared in methanol were mixed with phosphate buffer (2.5 ml, 0.2M, pH 6.6) and potassium ferricyanide [K3Fe(CN)6] (2.5ml, 1%). The mixture was incubated at 50°C for 20 min and 2.5ml of trichloro acetic acid (10%) was added to the mixture, which was then centrifuged at 3000 rpm for 10 min. The upper layer of the solution (2.5 ml) was mixed with distilled water (2.5 ml) and FeCl3 (0.5 ml. 0.1%) and the absorbance was measured at 700nm. Increased absorbance of the reaction mixture indicated increased reducing power. Ascorbic acid was used as a standard.

TLC-DPPH Antioxidant Screening: This method is generally used for the screening of potential antioxidant activity in crude extracts. It involves the chromatographic separation of the crude plant extract, after which the developed chromatogram is sprayed with a colored radical solution and the presence of antioxidant compounds indicated by the disappearance of radical color. 10μl of each extract was loaded as a 1cm band on the origin of TLC (Merck, Silica gel 60 F254 plates). Plates were developed using different proportions of hexane, ethyl acetate and methanol solvents. Plates loaded with Hexane extract were run with Hexane: Ethyl acetate (1:1); Ethyl acetate extract loaded plates were run with Ethyl acetate: Methanol (8:2) and Methanolic extract loaded plates were run with 100 % methanol. To detect antioxidant activity, chromatograms were sprayed with 0.2 % (w/v) DPPH in methanol 28. The presence of antioxidant compounds were detected as yellow spots against a purple background on TLC plates.

Statistical analysis: All values are expressed as mean ± S.E. The data was statistically analyzed with Students ‘t’ test.

DPPH Radical Scavenging Activity: Fig. 1 shows the DPPH radical scavenging activity of Hexane, Ethyl acetate and Methanolic extracts of Holostemma ada-kodien. These extracts exhibited the significant dose dependent DPPH radical scavenging activity, with a 50% inhibition (IC50) at a concentration of 265.95, 151.51and 68.18µg/ml respectively. The IC50 value of the hexane and ethyl acetate extract was found to be lesser than the standards, Ascorbic acid (IC50 26.59 μg/ml), BHT (IC50 73.52.59μg/ml). Methanolic extract showed good scavenging activity compared to that of BHT. 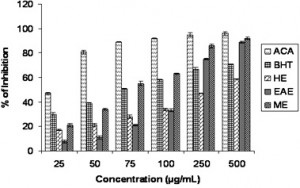 Nitric Oxide Radical Scavenging Assay: The scavenging of nitric oxide by Hexane, Ethyl acetate and Methanolic extracts of Holostemma ada-kodien increased in a dose-dependent manner as illustrated in Fig. 2. The IC50 values for the above test extracts are 312μg/ml, 284.09μg/ml, 245.098μg/ml respectively. BHT was used as the positive control shown 304μg/ml as IC50   value.  The IC50 value of Hexane extract found to be lesser than the standard, where as IC50 values of Ethyl acetate and Methanolic extracts were found to be higher compared to the BHT. IC50 values of the three extracts are in the following order; 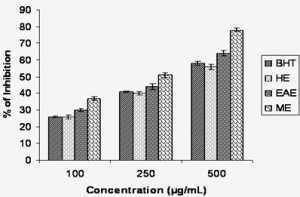 Superoxide Anion Scavenging Activity: The superoxide anion derived from dissolved oxygen by phenazine methosulphate/NADH coupling reaction reduces Nitroblue tetrazolium. The decrease the absorbance at 560 nm with the plant extract thus indicates the consumption of superoxide anion in the reaction mixture. As shown in Fig. 3, for the plant extracts Hexane, Ethyl acetate and Methanol, IC50 values are 240.38μg/ml, 198.4, 119.04μg/ml respectively. IC50 value of Ascorbic acid (98.03μg/ml) was comparatively good over the above test extracts. Among the three tested extracts, Methanolic extract showed high scavenging compared with Ethyl acetate and hexane extract respectively. Scavenging activity of the extracts is in the following order; 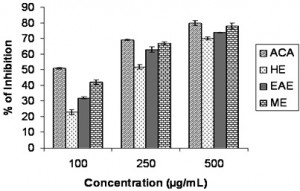 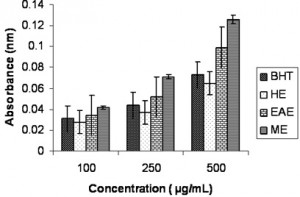 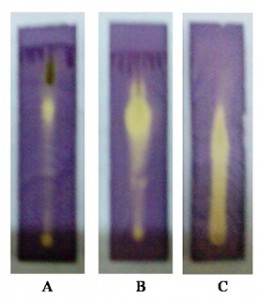 Sodium nitroprusside in aqueous solution at physiological pH spontaneously generates nitric oxide which interacts with oxygen to produce nitrite ions that can be estimated using Griess reagent. Scavengers of nitric oxide compete with oxygen, leading to reduced production of nitrite ions. In addition to reactive oxygen species, nitric oxide was also implicated in inflammation, cancer and other pathological conditions. The nitric oxide scavenging activity of Hexane, Ethyl acetate and Methanolic extracts increased in a dose dependent manner as illustrated in Fig. 2.

Superoxide anion was a free radical created from the normal process of energy generation in the human body. Superoxide radical was known to be very harmful to cellular components as a processor of more reactive oxygen species. Although superoxide anion was a weak oxidant, it gives rise to generation of powerful and dangerous hydroxyl radicals as well as singlet oxygen, both of which contribute to the oxidative stress 32. The superoxide anion derived from dissolved oxygen by phenazine methosulphate/NADH coupling reaction reduces nitroblue tetrazolium. The decrease in the absorbance at 560nm with the plant extracts indicates the consumption of superoxide anion in the reaction mixture.