Antioxidants are substances that directly scavenge ROS or indirectly up-regulate antioxidant defense system 5. Liver cells have the antioxidant defence system which posses antioxidants like glutathione, vitamin E, and ascorbic acid and antioxidant enzymes like catalase, superoxide dismutase act against oxidative stress, which protect from the destruction of cell components and cell death 6.

Ganoderma lucidum commonly known as Reishi, is a lignicolous high-value medicinal mushroom belonging to family Ganodermataceae. G. lucidum is the oldest medicinal mushroom, which is used for more than 2,000 years in Traditional Chinese Medicine (TCM). G. lucidum used in the treatment of several types of ailments including bronchitis, hepatitis, lupus erythematus, hypertension, asthma, hypercholesterolemia, CV diseases, migraine, nephritis, gastritis, dysmenorrhoea, arthritis and cancer 11. The fruiting body, mycelia, and spores of G. lucidum consist different 400 bioactive constituents including triterpenoids, proteins, polysaccharides, sterols, fatty acids, steroids, and trace elements.  Ganoderma contains triterpenoids as main bioactive constituents that could serve as a potent hepatoprotective agent in the food supplement 12. Wild G. lucidum is less abundant in nature so its in-vitro cultivation was developed for its easy availability for pharmaceutical development. DARL-4 is an indigenous strain and MS-1 is an exotic Malayasian strain which was in-vitro cultivated under sterile condition. The present study was conducted to evaluate the in-vitro antioxidant and in-vivo hepatoprotective activity of Ganoderma lucidum strains DARL-4 & MS-1.

Preparation of Plant Extract: In-vitro cultivated sample of Ganoderma lucidum strains DARL-4 and MS-1 were collected from the polyhouse of DIBER, DRDO. The strains were authenticated by the Mycology department, DIBER, DRDO. Samples were then air-dried and grinded into powdered form.

The powdered sample of DARL-4 and MS-1 were extracted with hydroalcohol (50:50), methanol, ethanol and aqueous by the cold maceration process. All the extracts were filtered with the help of the Whatman no. 1 filter paper. After repeated extraction three times, the filtered extract was combined and finally evaporated to dryness. The extracts were finally lyophilized and stored in a desiccator.

Animals: Male Wistar rats (180-250 gm) were used for the study. The animals were maintained at a temperature 23-25 °C with a 12 h light-dark cycle and at humidity 45-50%. They were provided feed (Ashirwad Industries, Mohali) and water during the study. Ethical clearance for performing experiments on animals was obtained from Institutional Animal Ethics Committee (1306/C/09/CPCSEA/ IAEC/12 dt 13/2/15) prior to the initiation of the experiment and the care of the laboratory animals was taken as per the CPCSEA regulations.

DPPH Radical-Scavenging Activity: The stable 1, 1-diphenyl-2-picryl hydrazyl radical (DPPH) was used for the determination of free radical-scavenging activity of the different extract. Different aliquots of each extract (hydroalcoholic, methanolic, ethanolic and aqueous) were taken in test tubes and volume was made up to 1 ml with methanol. Then 2 ml methanolic solution of DPPH (0.1 mM) was added in each test tubes. After 30 min at room temperature, the absorbance was recorded at 517 nm. Ascorbic acid was used as standard 13. Percentage inhibition was calculated as

Abs control is the absorbance of DPPH radical with methanol;

Abs sample is the absorbance of DPPH radical with sample extract/standard.

ABTS Radical-Scavenging Activity: Free radical scavenging ability of G. lucidum was also determined by the of 2,2’-azinobis [3-ethylbenzthiazoline] -6-sulfonate (ABTS) assay. 7.0 mM ABTS solution in methanol and 2.45 mM potassium persulfate solution in water were prepared as separate stock solutions in equal quantities and allowed them to react for 12 h at room temperature in the dark. The solution was then diluted by mixing 1.0 ml of ABTS solution and appropriate volume of methanol to obtain the absorbance 0.702 ± 0.001 units at 734 nm. Different aliquots of each extract (hydroalcoholic, methanolic, ethanolic and aqueous) were taken and volume was made up to 1 ml with methanol. Then 1 ml ABTS solution was added, and absorbance was taken at 734 nm after 10 min reaction time.

The ABTS scavenging capacity of the extracts was compared with ascorbic acid. Ascorbic acid was used as the standard 13.

Abs control is the absorbance of ABTS radical with methanol.

Abs sample is the absorbance of ABTS radical with sample extract/standard.

Acute Toxicity Study: The hydroalcoholic extract of DARL-4 and MS-1 were administered at different dosages 30, 125, 500 and 2000 mg/kg body weight orally to different groups of rats for acute toxicity. Acute toxicity study was carried out according to the OECD Guidelines and animals were observed for 14 days for any toxic symptoms.

The blood was withdrawn by retro-orbital puncture, collected and allowed to stand for 30 min at 37 °C. Then the serum was separated from blood with the help of centrifugation for further estimation of serum biochemical parameter. The animals were sacrificed under mild ether anaesthesia. Livers from all animals were removed, washed with ice cold saline and weighed.

Histopathological Studies: The liver tissue was collected & transferred in 10% buffered formalin solution for fixation. The formalin-fixed liver samples were stained for photomicroscopic observation. The histopathology examination was done from Department of Veterinary Pathology, G.B Pant University of Agriculture and Technology, Pantnagar.

Statistical Analysis: In an animal study, the data were expressed as mean ± SD. For statistical analysis data were subjected to analysis of variance (ANOVA) by using Graph pad instat. Values are considered statistically significant at P < 0.05.

DPPH Scavenging Assay: The results indicate that hydroalcoholic extract of DARL-4 and MS-1 exhibited higher potency than the other extracts. All the data were significant statistically, and means differed significantly with each other. The antioxidant effect of DARL-4 and MS-1 against DPPH were observed in the following sequence: hydroalcoholic > methanolic > aqueous > ethanolic as shown in Fig. 1 & 2. The data were shown in Table 1.

Acute Toxicity (LD50) Studies: Acute toxicity studies were carried out according to OECD guidelines. No mortality was observed at 30, 125, 500 and 2000 mg/kg body weight. Therefore 300 mg/kg dose was taken as an effective dose for in-vivo study.

FIG. 5: EFFECTS OF HYDROALCOHOLIC EXTRACT OF DARL-4 AND MS-1 ON THE BODY WEIGHT (BEFORE AND AFTER TREATMENT) IN PCM INDUCED HEPATOTOXICITY IN RATS

Feed Intake: The effect produced by the administration of hydroalcoholic extract of DARL-4 and MS-1 on feed intake of rats were shown in Fig. 6.

Liver Weight: The liver wt in the toxin control group was increased significantly (p<0.01) in comparison with control group. Pretreatment with hydro-alcoholic extracts (DARL-4, MS-1) and silymarin showed significantly reduced in liver weight as compared to PCM control rats were shown in Fig. 7.

Estimation of Biochemical Parameters: The effect of hydroalcoholic extract of DARL-4 and MS-1 on different biochemical parameters in paracetamol-induced hepatotoxicity in rats was observed as shown in Table 4 and 5. The seum levels of SGOT, SGPT and ALP were significantly increased (p<0.05, p<0.01) in pcm treated group in comparison with control group. Total bilirubin and direct bilirubin were also increased (p<0.01) in PCM treated rats as compared to control rats. The level of total protein, albumin and globulin were reduced significantly (p<0.01) in the toxin group as compared with the normal control group.

TABLE 4: EFFECT OF DARL-4 AND MS-1 ON SGOT, SGPT, ALP, TB AND DB IN PARACETAMOL INDUCED HEPATOTOXICITY IN RATS

Pre-treatment with hydroalcoholic extract of DARL-4, MS-1, and silymarin (std) significantly decreased (p<0.01) the level of elevated serum enzymes such as SGOT, SGPT, ALP, total bilirubin and direct bilirubin as well as increased the level of total protein, albumin, and globulin when compared with toxin control group.

The results indicate that pretreatment with DARL-4, MS-1, and silymarin significantly prevented the biochemical changes induced by paracetamol. MS-1 showed good hepatoprotective effect by normalizing the elevated serum enzyme levels in pcm induced liver damage in rats than that of DARL-4.

TABLE 5: EFFECT OF DARL-4 AND MS-1 ON TOTAL PROTEIN, ALBUMIN AND GLOBULIN IN PARACETAMOL INDUCED HEPATOTOXICITY IN RATS

Histopathological Examination: Group I (normal control) rats treated with distilled water showed with the normal structure of liver Fig. 8A while pcm treated rats showed hepatic degeneration with necrosis, vacuolization, space formation and inflammatory cell Fig. 8B. The hydroalcoholic extract of DARL-4, MS-1 (300mg/kg) and silymarin (25mg/kg) indicate a sign of protection by preventing hepatic necrosis, vacuolar degeneration and inflammation Fig. 8c-e. Animal treated with the DARL-4 and MS-1 showed improved histology of the liver as compared to that observed in animals treated with pcm (toxin group). The hydroalcoholic extract of MS-1 showed more effective hepatoprotective effect by complete regeneration of hepatic damage Fig. 8c as compared to DARL-4. 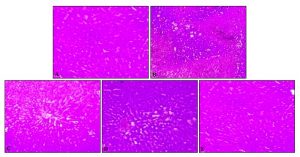 CONCLUSION: In the present study, antioxidant activity of different extract of DARL-4 and MS-1 were evaluated by using DPPH and ABTS method. The hydroalcoholic extract of DARL-4 and MS-1 showed potent antioxidant activity than the ethanolic, methanolic and aqueous extract in both DPPH and ABTS method. G. lucidum enriched with triterpenoids and polysaccharide that influence hepatoprotective efficacy via attenuating over-production of free radicals and thereby protecting the cells from damage 14.

In the hepatoprotective study, the paracetamol toxin group increases serum biochemical parameters such as SGOT, SGPT, ALP, and BUN whereas decreases the level of total protein, albumin, and globulin. Liver weight was also increased. The pre-treatment with hydroalcoholic extract of DARL-4 and MS-1 (300mg/kg) normalizes the elevated level of SGOT, SGPT, ALP, and BUN. The effects of extracts were comparable with standard drug silymarin (25 mg/kg). The level of total protein, albumin and globulin increases in the animals pre-treated with DARL-4 and MS-1 extract. The histopathological examination indicates reduction of liver damage in rats treated with DARL-4 and MS-1. MS-1 showed more effective hepatoprotective activity as compared to DARL-4. This study showed that in-vitro cultivated Ganoderma lucidum strains DARL-4 and MS-1 have good antioxidant and hepatoprotective activity.

ACKNOWLEDGEMENT: The authors are thankful to Director, Defence Institute of Bioenergy Research, DRDO for providing laboratory facilities to carry out the study. The authors are grateful to Dr. Munish Batra, Department of Veterinary Pathology, G. B. Pant University of Agriculture and Technology, Pantnagar, for technical assistance with histopathology examination. A special thanks to Dr K. P. Singh, Scientist, for his helpful guidance in pharmacological studies.

CONFLICTS OF INTEREST: We declare that we have no conflicts of interest.