ABSTRACT: The present study was aimed to investigate the methanolic (MEMP), ethyl acetate (EEMP) and n-hexane (HEMP) extracts of the whole plant of Mucuna pruriens for their in-vitro Antiurolithiatic potential. Calcium oxalate crystallization was induced by the addition of 0.01M sodium oxalate solutions in synthetic urine. The in-vitro anti-urolithiatic activity of various extracts of M. pruriens was investigated by measuring the turbidity of various concentrations of (50µg m/ml, 100µg m/ml, 150µg m/ml, 200µg m/ml, and 250µg m/ml) each extract in synthetic urine, by using UV/Visible spectrophotometer at 620 nm after incubating them for 10 min and microscopically under microscope equipped with digital camera at 10X. The results of the present study showed that the MEMP, EEMP dose-dependently inhibited the formation of calcium oxalate (CaOx) crystallization in the synthetic urine which was evident from the spectroscopic as well as in the microscopical studies. It was concluded that the antiurolithiatic activity of Mucuna pruriens was possibly mediated through inhibition CaOX crystals in the synthetic urine. But, further, in-vivo, preclinical studies are required to confirm its potential as Antiurolithiatic in terms of clinical use.

INTRODUCTION: Urolithiasis or Uroliths is the formation of stones in the kidney, bladder, ureter, urethra, or any part of the urinary tract. It occurs due to inadequate urinary drainage, presence of foreign bodies in the urinary tract, microbial infections, a diet rich with oxalates and calcium, vitamin deficiencies like vitamin A and metabolic disorders like hyperthyroidism, cystinuria, gout, etc. 1 It affects about 10-12% of the world population, mostly in industrialized countries 2.

It is the third most prevalent disorder in the urinary system with a recurrence rate of 50% 3. Urolithiasis occurs as a result of successive physiological events like supersaturation of urine, nucleation, growth, aggregation, and retention of calculi within the renal tubules 4. Renal calculi are composed of calcium oxalate, struvite, uric acid, and cysteine 5. But the majority of the renal stones are calculi of calcium oxalate crystals about 80% in the urinary tract 6.

The modern techniques like Extracorporeal Shock Wave Lithotripsy (ESWL), Ureteroscopy (URS), Percutaneous Nephrolithotomy (PNL) and open surgery are used if the renal calculi size is more than 5 mm but, these therapies showed significant side effects such as renal damage, renal tissue necrosis, hypertension, and damage to the surrounding organs 7. In addition to the modern techniques, conventional drugs like thiazide diuretics and calcium citrate were found to have limited efficacy and tolerability 8. On the other hand, herbal therapy is gaining importance among the public, especially for treating urolithiasis because of limited choice in allopathic medicines and have a recurrence rate of 50% at 10 years with this conventional therapy 9. However, herbal therapy was found to be efficient in depriving the recurrence rate of urolithiasis without side effects 10.

M. pruriens was folklorically used for inducing diuresis 11, 12 and also as a cleanser of kidney 13. In the present study, an attempt was made to investigate the in-vitro antiurolithiatic potential of the whole plant of M. pruriens on inhibition of calcium oxalate crystallization.

Collection of Plant Material and Extraction: The whole plant of M. pruriens was collected from Neiyur dam, Kanyakumari district of Tamil Nadu, India. The authentication was made from the botanical survey of medicinal plants unit, Govt. of India, Palayamkottai. The obtained whole plant material of M. pruriens was shade dried, powdered and passed through 40 mesh sieve and stored in an airtight container.

The powdered plant material of the whole plant of M. pruriens was subjected for extraction by continuous hot percolation method successively by using methanol, ethyl acetate, and n-hexane as solvents with the same marc. The extracts were evaporated to dryness in a rotary flash evaporator at a temperature not exceeding 60 °C, then stored in an airtight container.

Preliminary Phytochemical Screening: The crude extracts were screened for the presence of phytochemicals like alkaloids, glycosides, carbohydrates, sterols, phenolic compounds and tannins, flavonoids, saponins, proteins, and amino acids by using the standard procedures 14.

Preparation of Artificial Urine (AU): The artificial urine was prepared according to Burns and Finlayson method 15. It was prepared freshly for each time, and the pH has to be adjusted to 6.0.

Spectroscopic Studies: This method of analysis was just modified as specified in Goyal paveen Kumar et al. 16, and it has proceeded in the following way.

Without the Extracts of M. pruriens: To the 1ml of AU, add 0.5 ml of distilled water and blank reading was taken at 620 nm. Then to the above solution, 0.5ml of 0.01M sodium oxalate was added and incubated for 10 min. The absorbance was measured immediately for ten minutes. For each experiment, three replicates were taken.

With the Extracts of M. pruriens: The MEMP, EEMP, and HEMP were made to dissolve in water, filtered through the Whatman's filter paper and then different concentrations of 50µg m/ml, 100µg m/ml, 150µg m/ml, 200µg m/ml, and 250µg m/ml were prepared for each extract. A blank reading was taken with 1ml of AU and 0.5ml of plant extract solution, and then to the above, 0.5ml of 0.01M sodium oxalate solution was added and incubated for 10 min. The absorbance was observed to the above resulting solution at 620nm. For each experiment, three replicates were taken. The percentage of inhibition was calculated by using the following formula.

At = Absorbance with the extract

Microscopic Studies: With the same experimental protocol as described in the above manner, the calcium oxalate crystals formed with and without the extract were observed by using a microscope which was equipped with a digital camera at 10X.

Effect of Extracts on Inhibition of Calcium Oxalate Crystals by Turbidity Method: The effect of the extracts on CaOX crystallization was determined by UV/visible spectroscopic method. The turbidity of artificial urine was measured with the presence of inhibitor (extract) and without inhibitor (without extract) at 620 nm.  Then the percentage of inhibition was observed. All the extracts except HEMP showed inhibition of calcium oxalate crystallization in a dose-dependent manner Table 1. But, the methanolic extract of Mucuna pruriens showed significant inhibition on calcium oxalate crystallization when compared with EEMP and HEMP Graph 1. 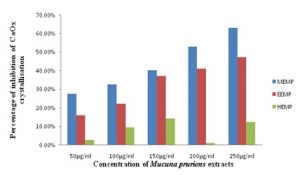 *All values are triplicate

Without Inhibitor (Without Mucuna pruriens Extract): 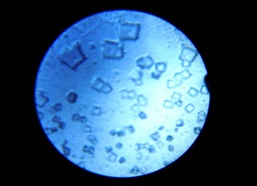 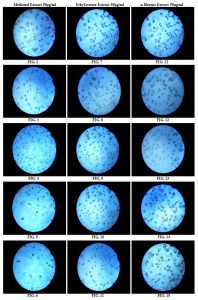 DISCUSSION: As earlier stated that kidney stone formation is a cascade process that results from successive physiochemical events of supersaturation, nucleation, growth, aggregation, and retention within the renal tubules. So, the various research works for developing antiurolithiatic agent mainly focuses on preventing the above physiochemical events. The most common component of kidney stones was calcium oxalate, which is formed by supersaturation with later factors like nucleation, growth, and aggregation 17. Thus if the supersaturation or later physiochemical events can be prevented, urolithiasis can be made to avoid. However, several measures like increasing fluid intake and diuretics are commonly taken to reduce supersaturation, it is generally accepted that better strategies for preventing kidney stones need to be developed 18. As these in-vitro crystallization methods are widely used in urolithiasis research 19, we have studied the antiurolithiatic potential of M. proteins extracts using in in-vitro crystallization systems.

The results of the present study were found to be that MEMP and EEMP inhibited the crystallization of calcium oxalate dose-dependent manner; there were less and smaller particles with increasing concentrations of MEMP and EEMP as shown in various microphotographs, i.e., Fig. 2-6 (MEMP), Fig. 7-11 (EEMP) when compared with microphotograph of calcium crystals without inhibitor (extract). Similar results were not found with HEMP even with the increase in concentration, as shown in Fig. 12-16. Spectroscopically the results were found to be MEMP and EEMP showed a significant percentage of inhibition of calcium oxalate in in-vitro urolithiasis. It has been noted that the MEMP showed significant inhibition on calcium oxalate crystallization up to 63.1% with 250 µgm/ml. In addition to the above results, EEMP also showed the potential antiurolithiatic activity, but it is less when compare with MEMP. While HEMP did not show any significant results as like MEMP and EEMP even with the increase in concentration, which was tabulated in Table. 1 and it was also evident from Graph 1. As a mean of evident of these spectroscopic results, the microscopic studies conformed the anti urolithiasis activity of MEMP and EEMP.

As the MEMP, EEMP reduces the number of crystals as well as the size of the crystals; it helps in reducing supersaturation, nucleation, and growth of crystals which are the critical events that eventually lead to the formation of uroliths. This property of MEMP and EEMP is therefore advantageous in preventing urolithiasis by avoiding urinary tract retention and thereby inducing urinary excretion. Furthermore, M. pruriens possesses the diuretic effect traditionally, which helps to reduce the stone formation by inducing diuresis. The MEMP and EEMP may also contain substances that inhibit calcium oxalate crystal aggregation which help to reduce the crystal growth thereby reducing the urinary tract retention, as large crystals are less likely to pass spontaneously in the urinary tract 20. By the above properties of MEMP and EEMP, it may cause the particles to be in dispersed form; thereby calcium oxalate crystals can be easily eliminated from the urinary tract which helps to prevent the kidney stone formation.

CONCLUSION: The methanol and ethyl acetate extracts of the whole plant of Mucuna pruriens have an inhibitory effect on calcium oxalate crystallization. These data suggest that the presence of antiurolithic effect is possibly due to CaOX crystal inhibition. But further preclinical and clinical studies were needed to evaluate and establish the use of this plant as antiurolithiatic activity.

I would like to extend my sincere thanks to Dr. D. Satheesh Kumar, M.pharm, Ph. D, Head of the department, Dept. of Pharmacology, Sree Vidyanikethan College of pharmacy for their valuable suggestions to complete this research work.