IN VITRO ASSESSMENT OF ANTIOXIDANT AND ANTIPROLIFERATIVE EFFICACY OF ANDROGRAPHIS PANICULATA

IN-VITRO ASSESSMENT OF ANTIOXIDANT AND ANTIPROLIFERATIVE EFFICACY OF ANDROGRAPHIS PANICULATA

INTRODUCTION: Medicinal plants are being used in traditional system of medicine from hundreds of years in many countries of the world due to their therapeutic properties 1, which are very useful in healing various diseases and the advantage of these plant-based traditional medicines is their being 100% natural 2.

Andrographis paniculata, highly reputed as “Kalmegh” and “King of Bitters”, is one of the important herbs comprising of several medicinal properties. A. paniculata is well known traditional medicinal plant species with a bright economic horizon, belonging to Acanthaceae family, found throughout Southeast Asia 3.

The bitterness of A. paniculata is related to its various pharmacological properties 4. Diterpenoids and flavonoids are the main chemical constituents of A. paniculata, which are believed to be responsible for most of the biological activities of this plant 5.

Free radicals, also known as reactive oxygen species (ROS), play a role in the etiology of several major diseases, including cancer. Reactive oxygen species (ROS) cause DNA strand breakage, sister chromatid exchanges and DNA–DNA and DNA–protein cross-links, in addition to base modifications, which have been associated with carcinogenesis 6. Since free radicals play a key role in the pathology of diseases, the supply of antioxidants, via the food chain, is of great importance for a healthy life 7.

The present study aimed to elucidate whether leaf extracts of A. paniculata has antioxidant and antiproliferative activity. As many of the diseased conditions (like cancer, atherosclerosis, cardio-vascular diseases, and degenerative disorders) are due to oxidative stress, the antioxidant potential of leaf extracts of A. paniculata was studied by performing DPPH and reducing power assays.

This study was undertaken because the leaves of A. paniculata are well known for their antioxidant property 8. C6 glioma cell line was used, and MTT assay was done to study the antiproliferative effect of methanolic and water leaf extracts of A. paniculata.

For extraction according to ascending polarity, 25 gram of powered plant leaf material was dissolved in 100 ml of hexane and was placed in orbit shaker at 130 rpm for 24 h at room temperature. The extract was filtered with the help of muslin cloth, and the filtrate was then subjected to centrifugation at 12000 rpm for 30 min at 5 ºC.

The residue obtained was then dissolved in chloroform and was subjected to the same processing as shown in Flow chart 1. Similarly, extraction was performed in descending polarity from polar to non-polar solvents as described in Flow chart 2.

The concentration of all extracts was calculated similarly.

Phytochemical Screening of Plant Extracts: Standard screening tests of extracts were carried out for various plant bioactive constituents. All the extracts were screened for the presence or absence of various secondary metabolites like amino acids, anthraquinones, glycosides, steroids, flavonoids, phytosterols, saponins, tannins, and triterpenoids. 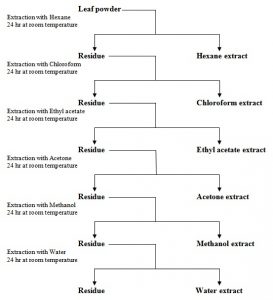 FLOW CHART 1: EXTRACTION BY MACERATION OF LEAF POWDER OF A. PANICULATA BY INCREASING ORDER OF SOLVENT POLARITY 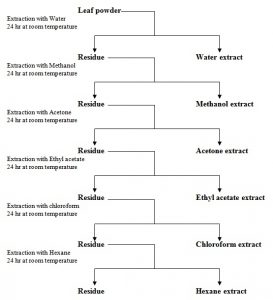 FLOW CHART 2: EXTRACTION BY MACERATION OF LEAF POWDER OF A. PANICULATA BY DECREASING ORDER OF SOLVENT POLARITY

Antioxidant Activity: Antioxidant activity of the extracts was analyzed by two methods:

DPPH Assay: The DPPH radical scavenging assay 10, an easy, rapid, and sensitive method was used to determine the antioxidant activity. The radical scavenging activities of the plant extracts were determined using UV spectrophotometer at 550 nm. DPPH (0.1 mM) was prepared in methanol. 2 ml of DPPH was added to 300 µl of 100 µg/ml concentration of each extract. Blanks were prepared to contain 2 ml of DPPH and 300 µl of solvent in which extract was prepared. Then the absorbance was measured at 550 nm at zero and twenty minutes. A decrease in the absorbance of the reaction mixture after twenty minutes indicates free radical scavenging activity. The further assay was performed on different concentrations of ascending polarity methanolic and descending polarity water extracts (chosen on the basis of the DPPH assay results and presence of maximum phytochemicals) starting from a concentration of 10 to 100 µg/ml. Vitamins C (Ascorbic acid) was used as the antioxidant standard. The radical scavenging activity was calculated as % inhibition of DPPH.

A control is the absorbance of the blank and

A test is the absorbance of the extract.

Reducing Power Assay: Antioxidant activity was also determined by Ferric ion Reducing Antioxidant Power (FRAP) assay 11. Different concentrations (10 to 190 µg/ml) of the ascending polarity methanolic and descending polarity water extracts were mixed with phosphate buffer (2.5 ml, 0.2 M, pH 6.6) and potassium ferricyanide (2.5 ml, 1% w/v). The mixture was incubated at  50 ºC for 20 min. Trichloroacetic acid (2.5 ml, 10%) was added to each mixture, which was then centrifuged at 1036 rpm for 10 min. The upper layer of solution (2.5 ml) was mixed with distilled water (2.5 ml) and a freshly prepared ferric chloride solution (2.5 ml, 0.1%). The absorbance was measured at 700 nm. A blank was prepared without adding extract. Increased absorbance of the reaction mixture indicates an increase in reducing power.

Thin-layer Chromatography: Thin-layer chromatography (TLC) was employed in this study to analyze the compounds present in the ascending polarity methanolic and descending polarity water extracts. Normal phase silica gel pre-coated TLC plates were used. Thin Layer Chromatography (TLC) of methanolic and water extract of A. paniculata was performed on chloroform: methanol (191:9) and chloroform: methanol (7:3) solvent systems respectively. The distances of bands from origin were measured, and Rf (retention factor) values were calculated.

Antiproliferative Assay: Antiproliferative activity of ascending polarity methanolic and descending polarity water extract was tested on C6 glioma cells using MTT test 12. Undifferentiated cells were subcultured by trypsinization (0.1% trypsin) when they reached 70-80% confluency. The experiment was performed in 96 well plates. Two replicates were used for the analysis of each concentration. C6 glioma cell line (40000 cells/ml) was treated with serially diluted concentrations of extracts for 24 h. The optic absorbance of each sample was measured at a wavelength of 595 nm using ELISA Reader.

The relationship between the concentration of extracts of A. paniculata and % viability was determined.

The phytochemical screening of the plant extracts showed the presence of amino acids, flavonoids, glycosides, saponins, steroids, tannins, and triterpenoids as elaborated in Table 1 and 2. Most of the bioactive components were showed to be present in ascending polarity methanolic and descending polarity water extract. These results are consistent with the findings on aqueous extract of A. paniculata, which show the presence of glycosides, saponins, tannins, and alkaloids, but not of anthraquinones 52. Diterpenoids and flavonoids are the main chemical constituents of A. paniculata, which are believed to be responsible for the most biological activities of this plant 5.

Phenolics, alkaloids, terpenoids, and cardiac glycosides detected in the extracts are compounds that have been documented to possess medicinal properties and health-promoting effects 53, 54, 55, 56.

TABLE 1: PHYTOCHEMICAL CONSTITUENTS OF ASCENDING POLARITY EXTRACTS OF A. PANICULATA

TABLE 2: PHYTOCHEMICAL CONSTITUENTS OF DESCENDING POLARITY EXTRACTS OF A. PANICULATA

The results of the reducing power assay on ascending polarity methanolic and descending polarity water extracts showed a linear increase in the intensity of blue color as the concentration of extracts increases as depicted in Fig. 5. 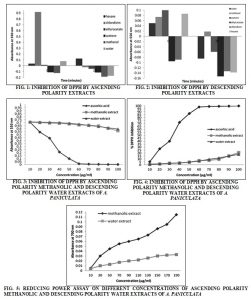 An idea about the polarity of various chemical constituents is also obtained while performing TLC analysis. Compound showing high Rf value in the less polar solvent system has low polarity and with less Rf value have high polarity.

Six bands were obtained on staining the TLC plates with iodine vapors for ascending polarity methanolic extract. The distances of bands 1 to 6 from origin were 1.1, 2.1, 2.5, 3.5, 4 and 4.7 respectively. 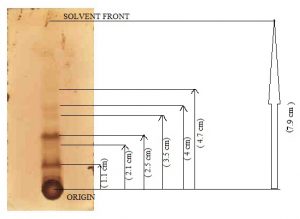 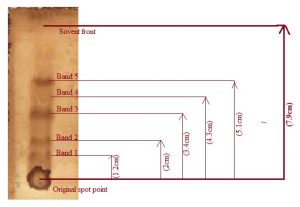 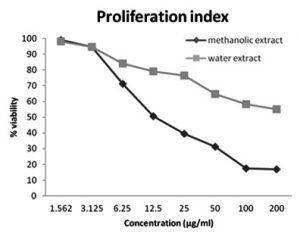 CONCLUSION: Although A. paniculata is most commonly used in Indian Ayurvedic medicine, but the mechanistic aspects of its effects and isolation of active components are still not explored. The results of the present study provide the evidence of the antioxidant and antiproliferative effect of ascending polarity methanolic and descending polarity water leaf extracts of A. paniculata.