INTRODUCTION: Ocimum americanum L., is an annual herbaceous plant native to asia and africa. It is an aromatic plant having 0.7 m hight with an erect stem and very green, ovate leaves, grayish green beneath, and white, greenish or purplish pink-white flowers 1.

Wihelmy’s method: Wihelmy’s method was studied to determine mucoadhesion strength of isolated mucoadhesive agent in terms of detachment weight required to break the mucus-polymer bond against adhesion. Small glass plates of dimension 2×5cm were coated by spreading 1%, 2 % and 3% w/v solution of isolated mucoadhesive agent and 1% w/v Carbopol 934P. These solutions were uniformly coated to small glass plates respectively. Coated plates were dried at 40oC. The mucus gel was collected from goat stomach and kept at 20°C. Thread was attached at one end of coated glass plate.

Coated glass plate was dipped into mucus gel while other side of thread was passed through pulley and end of thread was attached to small plastic bag. Plates were dipped into mucus gel for 10, 20 and 30 minutes. Weight was added into small polyethylene bag with small increments of water till the surfaces get pull out and separated vertically from mucus gel. Glass plate weight was minimized from the final detachment weight. Weight in gram required to pull out the glass plate from the mucus gel represents the force required to break the mucus-polymer bond against adhesion. Six times study was performed 11-13.

Modified Physical Balance method: Modified physical balance method was studied to determine mucoadhesive strength in terms of detachment force. Tablets (thickness 1mm and diameter 8.75 mm) of natural mucoadhesive agent and Carbopol 934P were prepared by direct compression method. Fresh goat stomach mucosa was collected from slaughter house and stored in 0.1 HCl at 37oC before use. Pans of both arms of physical balance were removed. Mucosa was placed on teflon block and tightly fixed using cynoacrylate adhesive.

Mucosa fixed block was placed in a beaker. To the beaker 0.1 N HCl was added up to surface of mucosa for moistening. Prepared tablet was stick to plastic bottle closure surface using cynoacrylate adhesive and was attached to one arm of modified physical balance using thread, below which mucosa attached block was affixed. On the opposite side of balance arm, small polyethylene bag was attached and both arms were balanced.

Block with attached mucosa in a beaker was raised up to tablet surface. Tablet was slightly pressed on mucosa to allow mucoadhesion. Then, small increments of water added in polyethylene bag to detach the surfaces 16. The weight in gram required to detach the surfaces noted. Six times study was performed. The force of adhesion (kgm/s2) was calculated by, Force of Adhesion = Weight required for detachment (kg) x acceleration (m/s2).

Fourier Transform Infrared Spectroscopy Studies (FTIR): Mucoadhesive agents were dried at 40°C for 24 hours and then kept in vacuum desiccator for 3 days. 20 mg of the samples were grounded with KBr and pellets were formed under a hydraulic pressure of 10 tones/cm2. FTIR spectra of mucoadhesive agents were taken at room temperature using FTIR (Bruker) and obtained spectrum was studied for identification of functional groups 17, 18.

Differential Scanning Calorimetric Studies (DSC): Mucoadhesive agents were dried at 40°C for 24 hours and then kept in vacuum desiccator for 3 days before DSC study. Mucoadhesive agent was weighed into aluminum crucible and sample was analyzed by differential scanning calorimeter (Mettler Toledo, DSC 823e) Sample was heated at scanning rate of 10°C/ min over a temperature range 20-300°C under nitrogen flow of 40 ml/min. DSC curve was studied for powder properties 19. 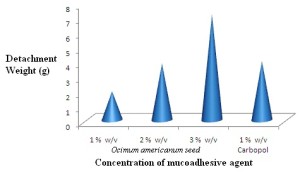 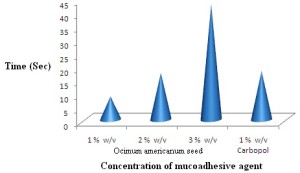 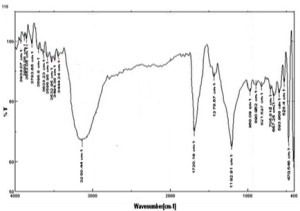