ABSTRACT: Objective: The present study explores the anticancer potentially of plant sample based on the evidence from the ethnomedicinal practice of the plant. The main objective was to find out the in-vitro comparative anticancer activity of the various methanolic extract. Method: Plants samples such as Mikania micrantha, Allium hookeri, Eryngium foetidium, and Alpinea galanga were collected, identified, and authenticated. By using Trypan blue test Human cervical cancer (Hela), cells were counted. The Human cervical cancer (Hela) cells were treated with methanolic extract of Mikania micrantha, Allium hookeri, Eryngium foetidium, and Alpinia galangal and 20 µL of MTT (5 mg/mL) solution was added to cells per well, and the plate was moved to a CO2 incubator (3-4 h incubation). Measurement was performed using a Spectramax M2 Microplate Reader (Molecular Diagnostic, Inc.) at a wavelength of 570 nm. Results: The Cytotoxicity of studied medicinal plants of Mizoram such as Mikania micrantha, Allium hookeri, Eryngium foetidium, and Alpinia galanga exhibited cytotoxicity in an increased manner with increase concentration against Hela cells. Their IC50 values were 49.02, 138.5, 199.7, and 209.4 µg mL-1, respectively. The IC50 of doxorubicin was found to be 3.305 µg mL-1. The anticancer activity of the leaves related to their contents of flavonoids. This study validates the traditional use of plants in the management of cancer.

Introduction: Cancer now a day is very widely spread and prevalent disease. Cancer is the third leading cause of death worldwide, preceded by cardiovascular and infectious diseases. It is becoming very common in every age group. It is very serious as its curability is very less due to unawareness for the symptoms and also the proper medication still not available. It is major concern in the health care perspective 1.

Cervical cancer is one now becoming common in the northeastern region. These are the main perspective to get through this research work in regards to helping the society. Cancer is one of the most life-threatening diseases in which deregulated proliferation of abnormal cells invades and disrupts surrounding tissues. There has been the success of using clinical therapies such as radiation, chemotherapy, immunomodulation, and surgery in the treatment of cancer, but these are limited. So, there is a need for alternative strategies in the management of cancer disease. Natural products can play a significant role as secondary metabolites present in them such as terpenoids, phenolic acids, flavonoids, alkaloids, etc. exhibit antioxidant properties, which is significant in the role of cancer treatment.

Thus, medicinal plants have become a focal point to improve future health needs against cancer with a lesser harmful effect 2. The methanol extract of the plant like Mikania micrantha, Allium hookeri, Alpania galanga, Eryngium foetidium was also carried out for anticancer activity studies, which includes the study of cytotoxicity by an MTT assay and cell viability determination by Trypan blue exclusion assay. These two studies will give information on how the plant plays a role in fighting cancer cells. The main principle of cytotoxicity of cells by MTT Assay is that the yellow tetrazolium MTT (3-(4, 5-dimethyl thiazolyl-2)-2, 5-diphenyltetrazolium bromide) is reduced by metabolically active cells, in part by the action of dehydrogenase enzymes, to generate reducing equivalents such as NADH and NADPH. The resulting intracellular purple formazan can be solubilized and by spectrophotometric means 3, 4, 5.

Plant Materials: Plants samples such as Mikania micrantha, Allium hookeri, Eryngium foetidium, and Alpinia galangal were collected from Mizoram. The plant specimens were authenticated by Dr. A. A. Mao (Scientist-F & H) Botanical Survey of India, Shillong. A voucher specimen of these plants has been deposited in the Department of Pharmacy, with Reference no: BSI/ERC/ TECH/2017/589 for future reference. Then samples were subjected for hot methanol extraction. The plant's extract was dried at room temperature until semi-solid or dryness is obtained. The extract was then dissolved in 0.01% methanol in distilled water and filtered through 0.22µ. Doxorubicin was used as a positive control with different concentration of 1, 2, 4, 8 µg/ml 5, 6, 7.

Sterility Test: It was done to check the extract from the contamination. 35 mm culture disc was plated with Hela in 2 ml of DMEM media and allow the cell to adhere. The crude plant extract was added in the microtitre plate and incubated at CO2 incubator (5%) for 24 h.

Cell Viability: The cytotoxic effects of the various plants were investigated using the MTT (Sigma, USA) on HeLa cells. The cells were seeded in 96-well plates at a density of 2 × 104 cells per well. After incubation for 20–24 h, the cells with 70–80% confluency were treated with the extracts at different concentrations (5, 25, 50, 100 and 200 µg mL-1) and incubated for 24 h. Then, 20 µL of MTT (5mg/mL) solution was added to cells per well, and the plate was moved to a cell incubator for another 4 h. The medium was removed, and 150 mL of DMSO was added to the cells. The plate was gently shaken for 15 min to dissolve the formazan crystals generated by proliferating cells, and the measurement was performed using a Spectramax M2 Microplate Reader (Molecular Diagnostic, Inc.) at a wavelength of 570 nm. Relative viability was calculated taking wells with non-treated cells as 100% control 8, 9, 10.

Test for Cellular Proliferation (MTT Assay Protocol): Seeded the HeLa at 3 × 105 cells/well in a 96 well plate. Cells may be seeded at different densities. At least three wells were left without cells. These wells serve as a control for the minimum absorbance. The plate was incubated overnight at 37 °C in a humidified incubator, 5% CO2 for the cancer cells to grow and adhere to the surface. Test compounds were added to the plate. Include replicates for a range of concentrations. Include negative controls (including vehicle control) and positive control.

The final volume will be 100 μl per well. The plate was incubated for overnight (or for some other appropriate time) at 37°C in a humidified incubator, 5% CO2. MTT reagent (20μl/100μl per well of the 96well plate) was added. Incubated at 37 °C for 4 h. 1 volume (100 μl) of the stop mix solution was added, and the plate was rocked at room temperature for a minimum of 1 h.

Read the plate on a plate reader using wavelength at 572 nm. Tabulate results and calculate the % viability 6, 7.

Morphological Staining: To observe the morphological changes of the cells, an inverted phase contrast microscope was used. Cells were inoculated at 3 × 105 cell/well in 24 well microplates and treated mentioned manner. Other culture wells were treated by H2O2 (100 μm) as a positive control of apoptosis and necrosis; respectively, as the negative control, some culture wells were prepared without any treatment. After being cultured for 16 h, the culture media removed, and cells fixed and stained by the standard hematoxylin-eosin method. The prepared samples were photographed at × 100.

Statistical Analysis: One-way analysis of variance (ANOVA), Duncan and Wilcoxon test were used for data analysis. All the results are expressed as the mean ± SD, and p-values below 0.05 were considered statistically significant.

In-vitro Anti-Cancer Activity (MTT Assay): The MTT assay results for 24 h and 48 h incubation of crude drug at the concentrations of 5, 25, 50, 100, and 200 µg/ml showed increased HeLa cell viability as the concentration got diluted. 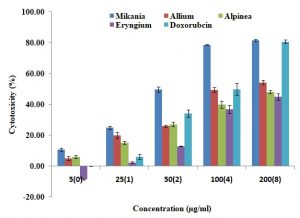 FIG. 1: THE GRAPH REPRESENTS THE PERCENTAGE CELL CYTOTOXICITY OF EXTRACTS AGAINST HELA CELLS. THE BRACKETS INDICATE CONCENTRATION OF DOXORUBICIN

The data present as Mean ± SD, n = 3; *The brackets indicate the concentration of doxorubicin

Morphological Staining: Morphological study of cell shape changes was performed by direct microscopy, hematoxylin, and eosin staining, using an inverted phase-contrast microscope (400X), it was found that the untreated cells exhibited normal shapes, with clear outline. Although the growth of the methanolic-extract-treated cells was inhibited. The extract treated cells were round; proliferation was inhibited and slowed. 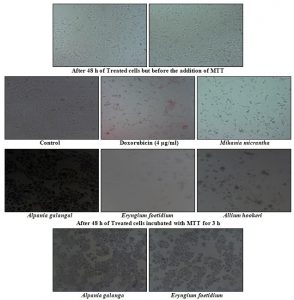 CONCLUSION: The Cytotoxicity of studied medicinal plants of Mizoram such as Mikania micrantha, Allium hookeri, Eryngium foetidium, and Alpinia galanga exhibited cytotoxicity in an increased manner with increase concentration against HeLa cells. Their IC50 values were 49.02, 138.5, 199.7, and 209.4 µg mL-1, respectively. The IC50 of doxorubicin was 3.305µg mL-1.

ACKNOWLEDGEMENT: This work was supported by the Regional Institute of Paramedical and Nursing Sciences. I would like to give special thanks to DBT- Advanced level state biotech hub, Mizoram University for allowing me to carry out this project in their laboratory. The author would like to thank for his technical support to the institute and also thank Ms. S.H. Victoria Devi for her valuable guidance.