ABSTRACT:Plants are the natural reservoir of many anticancer agents. Gardenia latifolia Ait. and Gardenia gummifera Linn. belonging to the family Rubiaceae. Gardenia Ellis. is a genus of 142 species, which occur in tropical and sub-tropical regions of Africa, South Asia, Australasia and oceania. The genus was named by Carl Linnaeus after Dr. Alexander Garden (1730-1791), a Scottish-born American naturalist.  Both the plant leaves were extracted by ethanol, extracts were subjected to cytotoxic activity study against MCF-7 cell lines using the MTT assay. MTT assay was the technique utilized for cell survival determination. Measurements were performed and the concentration required for a 50% inhibition of viability (CTC50) was determined graphically. The concentration of ethanolic extract yields the value of CTC50 as 170.00±2.0 µg/ml and 200.00±1.6 µg/ml respectively for Gardenia latifolia Ait. and Gardenia gummifera Linn. The results showed that the Gardenia latifolia Ait. had potential cytotoxicity than the Gardenia gummifera Linn. against MCF-7cell lines.

INTRODUCTION: Medicinal plants are gifts of nature to cure limitless number of diseases among human beings. The reason for using them as medicine lies in the fact that they contain chemical components of therapeutic value. The medicinal value of plants lies in some chemical substances usually secondary metabolites, which produce a definite physiological action on the human body. The most important of these bioactive compounds of plants are alkaloids, flavonoids, tannins and phenolics 1. Over the past few years, cancer has remained a major cause of death and the number of individuals affected with cancer is continuing to expand. Hence, a major portion of the current pharmacological research is devoted to anticancer drug design customized to fit new molecular targets2.

Gardenia latifolia Ait. is commonly known as Indian boxwood or Ceylon boxwood, is a densely foliaceous small tree that occurs throughout the greater parts of India common in deciduous forests along the streams. The stem bark and fruits are reported to be used in the treatment of various ailments such as snake bite, skin diseases, stomach pains, caries in humans and ephemeral fever in live stocks. Fruits are used for making perfumes 4.

Gardenia gummifera Linn. is commonly known as gummy gardenia. It is found in dry forests of Karnataka, Tamil Nadu, Andhra Pradesh and Kerala. Gardenia gummifera is claimed to have a number of medicinal properties which include anthelmintic, antispasmodic, carminative, diaphoretic, expectorant, potentiation of pentobarbitone induced sleep, Antiepileptic, peripheral and central Analgesic, Cardiotonic, Antioxidant and Antihyperlipidemic. It is also claimed to be useful in dyspepsia, flatulence for cleaning foul ulcers and wounds and to keep off flies from wounds in veterinary practice 5.

In this paper, we report the cytotoxic activity of the ethanolic extracts of Gardenia latifolia Ait., and Gardenia gummifera Linn. against MCF-7 (Breast carcinoma) cell line.

The leaves of Gardenia latifolia and Gardenia gummifera were cleaned and shade dried. The dried material was powdered using mechanical method and resulting powder is sieved with sieve of 0.3mm aperture size and stored in the airtight container.

The plant materials were extracted with ethanol using soxhlet extraction apparatus continuously for 16 hours 6. For extraction, the dried plant material was used. Initially 50gms of material was packed in filter paper and loaded into the thimble of soxhlet apparatus. 300 ml of ethanol was poured into the distilled flask and the whole apparatus was set. The soxhlet extraction was performed for 12- 16 hours until the collected solvent in siphon tube appears to be clear. Later the extracted solvent was evaporated under reduced pressure to get semi solid extract.

MCF-7 (Breast carcinoma) cell line was procured from National Centre for Cell Sciences (NCCS), Pune, India. Stock cells were cultured in DMEM supplemented with 10% inactivated Fetal Bovine Serum (FBS), penicillin (100 IU/ml), streptomycin (100 mg/ml) and amphotericin B (5 mg/ml) in an humidified atmosphere of 5% CO2 at 37°C until confluent. The cells were dissociated with TPVG solution (0.2% trypsin, 0.02% EDTA, 0.05% glucose in PBS). The stock cultures were grown in 25 cm2 culture flasks and all experiments were carried out in 96 microtitre plates (Tarsons India Pvt. Ltd., Kolkata, India).

For Cytotoxicity studies, each weighed test drugs were separately dissolved in distilled DMSO and volume was made up with DMEM supplemented with 2% inactivated FBS to obtain a stock solution of 1mg/ml concentration and sterilized by filtration. Serial two fold dilutions were prepared from this for carrying out cytotoxic studies.

Principle: The ability of the cells to survive a toxic insult has been the basis of most cytotoxicity assays. This assay is based on the assumption that dead cells or their products do not reduce tetrazolium. The assay depends both on the number of cells present and on the mitochondrial activity per cell. The principle involved is the cleavage of tetrazolium salt 3-(4, 5 dimethyl thiazole-2-yl)-2, 5-diphenyl tetrazolium bromide (MTT) into a blue coloured product (formazan) by mitochondrial enzyme succinate dehydrogenase. The number of cells was found to be proportional to the extent of formazan production by the cells used 7.

Procedure: The monolayer cell culture was trypsinized and the cell count was adjusted to 1.0 x 105 cells/ml using DMEM containing 10% FBS. To each well of the 96 well microtitre plate, 0.1 ml of the diluted cell suspension (approximately 10,000 cells) was added. After 24h, when a partial monolayer was formed, the supernatant was flicked off, washed the monolayer once with medium and 100 ml of different test concentrations of test drugs were added on to the partial monolayer in microtitre plates. The plates were then incubated at 37o C for 3 days in 5% CO2 atmosphere, and microscopic examination was carried out and observations were noted every 24 h interval. After 72 h, the drug solutions in the wells were discarded and 50 ml of MTT in PBS was added to each well. The plates were gently shaken and incubated for 3 h at 37o C in 5% CO2 atmosphere.

The supernatant was removed and 100 ml of propanol was added and the plates were gently shaken to solubilize the formed formazan. The absorbance was measured using a microplate reader at a wavelength of 540 nm. The percentage growth inhibition was calculated using the following formula and concentration of test drug needed to inhibit cell growth by 50% (CTC50) values is generated from the dose-response curves for each cell line.

MTT assay was the technique utilized for survival determination measurements were performed and the concentration required for a 50% inhibition of viability (CTC50) was determined graphically. The effect of the samples on the proliferation of MCF-7 was expressed as the % cell viability. Results are tabulated in Table- 1 & 2 and graphically represented in Fig-1 & 2. The percentage of growth inhibition was found to be increasing with increasing concentration of test compounds. From the graphs the concentration of ethanolic extract yields the value of CTC50as 170.00±2.0 µg/ml and 200.00±1.6 µg/ml respectively for Gardenia latifolia Ait. (Table-1 & Fig-1) and Gardenia gummifera Linn. (Table-2 & Fig-2). So the extracts have a potent action against to human breast cancer. 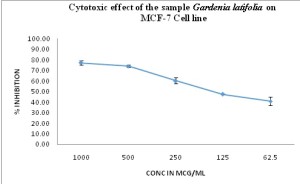 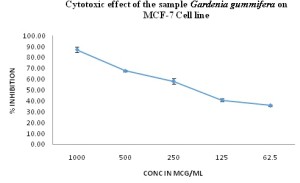 Our phytochemical screening revealed the presence of terpenoids, flavonoids, phenols, glycosides, phytosterols, tannins and resins in the ethanolic extracts of both the plants, which could be responsible for this activity. The phytochemical constituents such as flavonoids and terpenoids are the major components which are responsible for the potential cytotoxic activity 8. The flavonoids have reported for their cytotoxic activity due to presence of phenolic groups 9. Terpenes have found to inhibit the growth of cancerous cells, decreases tumor size, decrease cholesterol level and also decrease micro-organism concentration 10.

CONCLUSION: In this study, the leaf extracts ofGardenia latifolia Ait. and Gardenia gummifera Linn. posses cytotoxic activity against MCF-7 cell lines. Gardenia latifolia Ait. had potential cytotoxicity than the Gardenia gummifera Linn. with the percentage mortality increased with an increase in concentration. However, further investigations are to be carried out to isolate and characterize the specific bioactive principles.