ABSTRACT: Members of the  genus Ipomoea of family Convolvulaceae besides being some of the most beautiful ornamental plants cultivated for their bell shaped flowers, are also of medicinal value, with some of them  reported as  cytotoxic agents against some cancer cell lines. The present study evaluates the anticancer activity of the leaf extracts of ten Ipomoea Jacq. Species growing in and around Mumbai, India, on the A 549 cellline and Hep-G2 cell line evaluated by the SRB assay. The crude aqueous extracts of leaves of Ipomoea species studied had significant cytotoxic effect on HEP G2 Cell Line and showed significant inhibitory effect on A549 cell line. , I. Cairica was the best growth inhibitor (GI50at 30.6µg/ml) for HEP G2 cell line followed by I. Hederifolia (GI50 at 38.1 µg/ml), I. Carnea (GI50 at 40.0 µg/ml).  Considering the A549 cell line, none of the crude extracts showed GI50 inhibition upto80 µg/ml with the exception of I. aquatic which showed GI50at 75.6 µg/ml.

Introduction: Folk medicine since times immemorial has incorporated the use of plants for their medicinal properties. Many of the plants species used for this purpose have been found to contain therapeutic substances which can be extracted and used in preparation of drugs, but the plant itself can also be used either directly or as an extract for medication, a practice that is particularly popular in developing countries1, 2.

Plewa and Wagner3 have stated that many plants contain cytotoxic and genotoxic substances. Many drugs that are used for cancer treatment are obtained from plant sources the most common examples being Taxol from Taxus, Campothecin from Camptothecaacuminate, vinca  alkaloids,  vincristine  and  vinblastin, isolated from Catharanthusroseus;

etoposide and teniposide derivatives of epipodophyllotoxin, isolated from Podophyllum. 4, 5, 6

They are effective against proliferating cellsand exhibit cytotoxic effects either by damaging DNA or by blocking the formation of mitotic spindle during stages of cell division7. There is an emphasis thus on the importance of the search for improved cytotoxic agents in the discovery of modern anti-cancer drugs8. Herbal medicines, as an alternative cancer therapy have attracted a great deal of attention due to their low cost and low toxicity9.

To confirm with surety that a particular compound or plant had anti-cancer properties, it is essential to carry out the test on human cancer cell lines, of various types as an extract can be cytotoxic on a particular cell line but not on another, that is the plant extracts exhibit selective cytotoxicity. Several workers 12, 13, 14, 15, have tested the anti- cancer activity of plant extracts of herbal medicines and have observed the selective cytotoxicity.

Considering the medicinal values of Ipomoea species and the reported cytotoxic effect of the extracts of I. aquatica, I. pes-caprae, I. Hederifolia and I. carnea on human cell lines cytotoxic activity involving ten species growing in and around Mumbai, India was studied on the A 549 cell line and Hep-G2 cell line to assess the anti -cancer activity of their leaf extracts.

Ten species of Ipomoea were collected from wild habitat, in and around Mumbai, identified and authenticated in consultation with Blatter Herbarium, St. Xavier’s College, Mumbai, India. One copy of the herbarium was deposited in the Blatter Herbarium and the other copy is preserved in The Late Yashwant rao Adbal Herbarium, of the Department as voucher specimen (Table 1).

TABLE 1: THE TEN SPECIES OF IPOMOEA COLLECTED AND DEPOSITED IN THE LATE YASHWANT RAO ADBAL HERBARIUM, OF THE DEPARTMENT

Plant Powder Preparation: The leaves of the ten Ipomoea species under study were collected during flowering season washed in running water, rinsed in deionized water and air dried for 10 days. They were powdered and sieved through BSS mesh No. 85. Loss on drying was determined. The powders were stored in a cool dry place.

Plant Extract preparation: 10g of the dry leaf powders of the ten species were weighed and extracted in 100ml Distilled water for 3h in Soxhlet Extractor at 100oC. The extract was filtered using Whatman filter paper no. 41. Solvent extract was concentrated on Rotavapor (under vacuum) and was considered as 10% crude aqueous extract.

Testing the extracts for anti-cancer activity on Human cell lines:

The anticancer activities of the crude aqueous extracts were studied at Advanced Center for Treatment, Research and Education in Cancer (ACTREC), Mumbai, India. Two cancer cell lines namely, Lung adenocarcinoma epithelial cell line A549 and Human Hepatoma cell line, Hep-G2 were used for the assay. The SRB Assay procedure of Skehan et al. 19 as given by Gaidhaniet al.20 was followed. The two cell lines were maintained in ideal laboratory conditions. The cell lines were grown in RPMI 1640 medium containing 10% fetal bovine serum and 2mM L-glutamine. The cells were inoculated into 96 well microtiter plates of 90µl/ well capacity, with appropriate plating densities, depending on the doubling time of individual cell lines, followed by incubation at 37°C, in 5% CO2, 95% air and 100% relative humidity for 24 h prior to addition of plant extracts.

After 24 h, the cells from one well, of each cell line were fixed in situ with TCA, to represent a measurement of the cell population for each cell line at the time of drug addition (Tz). Plant extracts were solubilized in DMSO as 10mg/ml concentration and stored frozen prior to use. At the time of drug addition, an aliquot of frozen concentrate was thawed and diluted to 10 times, to make it 1000 µg/ml with complete RPMI medium.

This complete RPMI medium containing test extract was further diluted with complete RPMI medium to adjust the concentration at 100, 200, 400 and 800 µg/ml. Aliquots of 10 µl of these different dilutions were added to the appropriate microtiter wells already containing 90 µl of cell suspension, resulting in the required final drug concentrations of 10, 20, 40 and 80 µg/ml. For each of the microtitre plate the well known anticancer drug ‘ADR’ (Adriamycin) was used as a positive control.

Endpoint Measurement:After compound addition, the plates were incubated at standard conditions for 48 hours and assay was terminated by the addition of cold TCA. Cells were fixed in situ by the gentle addition of 50 µl of cold 30 % (w/v) TCA (final concentration, 10 % TCA) and incubated for 60 minutes at 4°C. The supernatant was discarded; the plates were washed five times with tap water and air dried.

The SRB Assay: Sulforhodamine B (SRB) solution (50 µl) at 0.4 % (w/v) in 1 % acetic acid was added to each of the wells, and plates were incubated for 20 minutes at room temperature. After staining, unbound dye was recovered and the residual dye was removed by washing five times with 1% acetic acid. The plates were air dried. Bound stain was subsequently eluted w ith 10 mM Trizma base, and the absorbance was read on an ELISA Plate Reader at a wavelength of 540 nm with 690 nm reference wavelength.

Calculations: Percent growth was calculated on a plate-by-plate basis for test wells relative to control wells.

Growth inhibition of 50 % (GI50) was calculated from [(Ti-Tz)/(C-Tz)] × 100 = 50, which is the drug concentration resulting in a 50% reduction in the net protein increase (as measured by SRB staining) in control cells during the drug incubation.

The LC50 (concentration of drug resulting in a 50% reduction in the measured protein at the end of the drug treatment as compared to that at the beginning) indicating a net loss of cells following treatment was calculated from:

Values were calculated for each of these three parameters if the level of activity was reached; however, if the effect was not reached or was exceeded, the values for that parameter were expressed as greater or less than the maximum or minimum concentration tested.

In view of these observations and considering the ethno medicinal uses of several Ipomoea spp. and an earlier report that I. aquatic Forsk. and I. bahiensis  possess anticancer activity against Vero, cell lines23, and against Hep-2, A-54917 , the crude aqueous extracts of the ten species were  tested for their cytotoxic properties on  mammalian cell lines Lung adenocarcinoma epithelial cell line A 549 and Human Hepatoma cell line, HEP G2.

The crude extracts were more effective on the cell line HEP G2 than on A 549.

TABLE 2: EFFECT OF IPOMOEA SPECIES AGAINST HEP G2 AND A549 CELL LINES 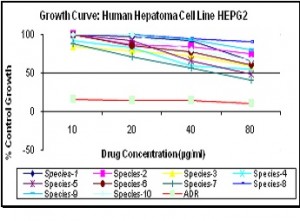 DISCUSSION: Considering the effect on HEP G2cell line (Table 2, Fig 1), I. cairica was the best Growth inhibitor (at 30.6µg/ml) followed by I. hederifolia (38.1 µg/ml), I. carnea (40.0 µg/ml). However I. aquatic with respect to HEP G2 it showed GI50 at 75.6 µg/ml and the cytotoxicity activity of I. aquaticawas reported on the same cell line at 156 mg/ml by Prasad et al17.. Such high concentrations were not tried out as according to Gaidhaniet al.22 the range of the concentration of the compound being tested on human cell lines, should be from 10µg/ml to 80µg/ml.

Considering the A549 cell line (Table 2, Fig.2) none of the crude extracts showed GI50 inhibition upto 80µg/ml.  However by extending the graph, it was seen that higher concentrations would prove to be effective. Prasad et al.17 have reported a concentration of 394mg/ml of I. aquatic leaves on the same cell lines and Lin et al.19have reported the cytotoxicity of I.  cairica on the same cell line.

Arokiyaraj et al.23 have reported that the tri-terpenes and flavonoids act as inhibitors of human lymphocyte proliferation. According to Pettit25I.pes-capraecontains betulinic acid which is a promising anti-cancer against melanomy by inhibiting the growth of cancer cells and inducing apoptosis. In the present study I. pes-caprae exhibited GI50 activity at 48µg/ml for HEP G2anddid not exhibit any activity upto 80 µg/ml on A549 cell line. Values beyond 80µg/ml could be estimated from the graphs.

Ancuceanu26in his review article on Lung Cancer, has pointed out anti cancer activity of a compound can be due to that microtubule interfering substances like Vinca alkaloids and colchicine, topoisomerase inhibitors like Scutellaria baicalensis, inhibitor of DNA synthesis like certain Polygonum species or an inhibitor of DNA polymerase I activity as Indirubin from Indigofera suffrutticosa.

CONCLUSION: The crude aqueous extracts of leaves of Ipomoea species studied had significant cytotoxic effect on HEP G2 Cell Line and showed significant inhibitory effect on A549 cell line. , I. cairica was the best growth inhibitor (GI50at 30.6µg/ml) for HEP G2 cell line followed by I. hederifolia (GI50 at 38.1 µg/ml), I. carnea (GI50 at 40.0 µg/ml).  Considering the A549 cell line, none of the crude extracts showed GI50 inhibition upto80 µg/ml with the exception of I. aquatic which showed GI50at 75.6 µg/ml.

ACKOWLEDGMENTS: We are grateful to the Principal, R. Ruia College for providing the facilities for the conductance of the work. We thank Blatter Herbarium, St. Xavier’s College for authentication of herbaria of Ipomoea species and also ACTREC, Mumbai for helping us in studying the anticancer activities.