ABSTRACT: Natural products represent a reservoir of diverse templates and are being tapped to outsource novel anticancer agents. Hemidesmus indicus R.Br.(Fam: Asclepidaceae) has been reported to be useful for the treatment of inflammation, cuts, wounds, burns, snake bite, skin and blood diseases, ulcers, immunological disorders . In the present study, the methanolic extract of the roots of Hemidesmus indicus, was investigated against human colon cancer cell line (HT29) to explore its anticancer potential. The effect of Hemidesmus indicus methanolic extract (HIME) on proliferation of HT29 cancer cell line was determined by microculture tetrazolium assay (MTT). The cells were exposed to different concentrations (100, 50 , 25, 12.5 , 6.25, 3.125 and1.5 μg/ml) of HIME or vehicle for 48 h. Cisplatin (5, 2.5 and 1.25 μg/ml) acted as positive control and vehicle (DMSO) as negative control. Following treatment, the cells were exposed to Tetrazolium dye (5mg/ml) for 4 h. The formation of the purple coloured formazan complex was dissolved by adding DMSO (100 μl) and read at 490 nm using ELISA microtiter plate reader to determine the inhibitory concentration, IC50. About 40% increment in cell killing was seen when the dose of HIME was increased from 1.5-25 μg/ml. At concentration of 100 μg/ml, 49.81%, cytotoxicity was recorded. The IC50 value of HIME was 1.8964 μg/ml after 48 h of incubation. In this study, it was observed that HIME induces a concentration dependent inhibition of HT29 cells, with an IC50 value of 1.8964 μg/ml after 48 h of incubation.

Cancer causes significant morbidity and mortality and is a major health problem worldwide. The incidence of colon cancer is rising in every country of the World. It is the fourth most common cause of cancer death (after lung cancer, stomach cancer and liver cancer). Thus, colon cancer is a worldwide disease and needs to be addressed seriously. Medicines derived from plants have played a pivotal role in health care of ancient and modern cultures. Ayurveda, the Indian system of medicine mainly uses plant based drugs or formulations to treat various ailments including cancer.

Almost 60% of drugs approved for cancer treatment are of natural origin. Vincristine, etoposide, taxanes and camptothecines are all examples of plant-derived anticancer compounds.1 Therefore; there is an urgent need to develop alternative therapeutic measures against this deadly disease. There is always the hope that the search among the traditional medicinal plants may provide potent and safe medicines. Significant steps have been taken by the WHO to carryout research on plants, that work having greater activity and few or no side effects. Hemidesmus indicus R.Br., commonly known as Indian sarsaparilla, Hindi name is Anantmul, belonging to family Ascalepidaceae. It is widely distributed medicinal plant in India. Its root is widely used in Ayurvedic, Unani, folk medicine for the treatment of inflammation, cuts, wounds, burns, snake bite, skin and blood diseases, ulcers, immunological disorders.2 Traditionally, it has also been used to treat the cancers of abdomen and skin. The root decoction of Hemidesmus indicus was tested on hepatoma HepG2 cell lines.3,4 It is well known for its antioxidant and anti-inflammatory activity. The present study has been designed to evaluate the antitumor and cytotoxic activity of Hemidesmus indicus in HepG2 human hepatocarcinoma cell line.4, 5

Sample preparation: Hemidesmus indicus (rhizomes) was purchased from an authenticated herbal supplier, New Delhi., Authentification of the herb was carried out from the Department, National Bureau of Plant and Genetic Resources (NBPGR), New Delhi, where a specimen is conserved with the voucher No.NHCP/NBPGR/2008/3. The rhizomes of Hemidesmus indicus was grounded into powdered form using an electrical mill. Extraction of the powder (70 gm) was done by soxhlet apparatus by using methanol (200 ml) for 72 hrs. All extract were evaporated to dryness by hot water bath, and centrifuged at 4000 rpm at 20°C for 10 min to obtain the supernatant.  Then it was reconstituted in distilled water and stored at –20°C. At use, the frozen extracts were thawed until they reached room temperature.

MTT assay: Cytotoxic activity of HIME against human colon tumor cell line was tested, using the microtitration colorimetric method of MTT reduction. The tetrazolium salt 3- [4, 5- dimethylthiazol- 2- yl] - 2, 5-diphenyltetrazolium bromide (MTT) is used to determine cell viability in assays of cell proliferation and cytotoxicity. MTT is reduced in metabolically active cells to yield an insoluble purple formazon product. The methodology described is a modification of the original MTT colorimetric assay developed by Mosmann (1983). Cells were harvested from maintenance cultures in the exponential phase and counted by a hemocytometer using trypan blue solution.

The cell suspensions were dispensed (100 µL) in triplicate into 96-well culture plates at optimized concentrations of 1.5x105 cells/ml for HT29, after a 24-hr recovery period, the cisplatin standard or HIME was diluted with distilled water were added. Seven dilutions of HIME were tested (100, 50, 25, 12.5, 6.25, 3.125 and1.5 μg/ml) with an incubation period of 48 h. Cisplatin was used as positive control and vehicle (DMEM) as negative control. For median inhibition concentration (IC50) determination, dose-response curves were conducted with a series of different concentrations of HIME that were approximately equal to the IC50.

To control wells, only culture medium (100 µl) was added. After an additional 48-hr incubation period, the medium in each well was aspirated and replaced with 20 µl of MTT working solution (MTT) stock solution mixed with medium to attain a final concentration of 0.5 mg/ml. MTT powder was dissolved in Dulbecco's PBS to form a stock solution of MTT (5 mg/ml). Thestock solution was filter-sterilized through a 0.22 µmfilter and stored at –20°C. The cells were incubated at 37°C for 4 h,and then the medium was aspirated and replaced with 100 µlDMSO to dissolve the formazan crystals formed. The culture plateswere shaken for 5 min and the absorbance of each well was readat 490 nm with 655 nm as the reference wavelength.The relative viability of the treated cells as compared to thecontrol cells was expressed as the % cyto-viability, using thefollowing formula:

IC50 was then determined by nonlinear regression analysis of the corresponding dose response curve. 7 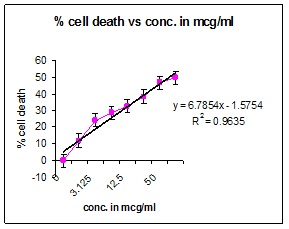 Figure 1: Cytotoxicity of HIME against HT29cell line after 48 h incubation

Cytotoxic activity against HT29 cell line at the concentrations evaluated. Cytotoxic effect against HT29colon cancer cell line is considered as a predictive anticancer activity indicator and IC50 value calculated for HIME was below 50 μg/ml, which indicates that HIME potentially present an interesting cytotoxic activity and should be evaluated against primary cultures to determine the selectivity of their effects. Observed HIME activity results lead to consider Hemidesmus indicus as a potential anticancer herb against colon cancer.