ABSTRACT: The present study was carried out to assess the anticancer activity of methanol extracts of internal bone of L.duvauceli and S. pharaonis for cell viability and toxicity on HepG2 liver cancer cells. The bone extracts had significant cytotoxicity on HepG2 cell in different concentrations (100,500,1000 µg/ml).  Methanol fraction of squid bone powder showed cell death at a higher concentration of 1000µg.  27% toxicity was observed at 100µg/ml and 37% at 1000µg/ml. The viability of cuttlefish bone powder ranged from 58% (1000µg/ml) to 68% (100µg/ml). Hep G2 cells experienced a significant decrease in viability at low concentration with an eventual decline at the highest concentration.  The percentage of toxicity of cuttle bone extracts varied from 32 to 42. Minimum toxicity of 32% was observed at 100µg and maximum of 42% was observed at 1000µg concentration and IC 50 at a concentration of >1000µg.   The percentage of toxicity showed increasing trend with increasing concentration of the extract. The result suggested that the cephalopods bone is a source to be considered in the discovery of drug development for cancer.

related death worldwide because of tumour heterogeneity and the development of multidrug resistance phenotypes 1.  Till now the availability of treatments for liver cancer remains unsatisfactory 2. Hence, the search for active drugs from alternative sources including marine environment, obviously becomes imperative.   Cephalopods are the largest single group of biotoxic invertebrates, which may be largely useful in the biomedical arena. The physical activities of squid and cuttlefish ink such as  antimicrobial 3-13, antioxidant 14-16, antiradiation 17, anti-tumour 18-24, immunity promotion 25, 26 induction of many cytokines 27, 28 have been widely studied in recent years.

The cuttlebone refers to the internal cartilaginous shell of cuttlefish, squid and octopus. Traditionally cuttlebone powder is used as a medicine for some ear ailments, stop bleeding and improve kidney efficiency 29, 30.  Antibacterial and antifungal activity of internal bone of cephalopods was studied in different species 31, 32.  But only a few cephalopods have been tested for anticancer activities, especially in India.  Therefore, the aim of the present study was to assess the potential anticancer activity of the methanolic extracts from the internal bone of L.duvauceli (squid) and S. pharaonis (cuttle fish) using cell viability and toxicity assay (MTT assay) on human HepG2 liver cancer cell line.

Collection and Preparation of extract:

In the present study the animals (L. duvauceli and S.pharaonis) were collected from Gulf of Mannar, Thoothukudi coastal region (Long 780 8” to 790 30” E and Lat 80 35” to 90 25” N)  by trawl catch, brought to the laboratory, cleaned and washed with fresh sea water to remove all impurities.  The internal bones were dissected, washed, air dried and pulverized. 10g of pulverized bone powder was mixed with 100 ml of methanol solvent and kept in rotary shaker at 100 rpm overnight and filtered with Whatman No.1 filter paper and concentrated to dryness at 400c, lyophilized and stored at 40c until further use.

About 1mL cell suspension (105cells/ml) was seeded in each well and incubated at 370 C for 48 hour in 5% CO2 for the formation of confluent monolayer. The monolayer of cells in the plate was exposed to various dilutions of methanolic extract (1000µg, 500µg and100µg). The cell viability was measured using MTT assay with MTT (5 mg/ml) and DMSO.  The tetrazolium salt is metabolically reduced by viable cells to yield a blue insoluble Formozan product measured at 570nm

Morphological studies using a normal inverted microscope were carried out to observe the cell death treated with sample on HepG2 liver cancer cells.

Morphological changes of drug treated cells were examined using an inverted microscope. (Plate 1). As the concentration of the extracts increases from 100µg to 1000µg the number of Hep G2 cancer cells decreased.

TABLE 2: PERCENTAGE OF VIABILITY AND TOXICITY OF METHANOL EXTRACT FROM S.PHARAONIS   BONE POWDER 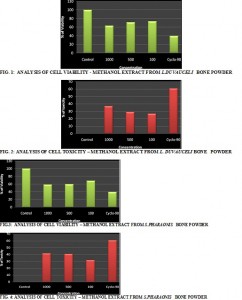 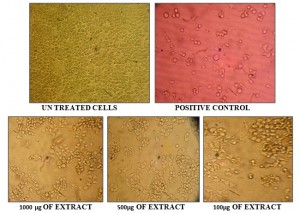 Cephalopods play an important role in marine ecosystem and are valuable to man as food, in biomedical research and proven to be a very rich source of extremely potent compounds that have significant anticancer activity 34-36.  The cephalopod ink extract have protective effect towards hemopoietic injuries from chemotherapeutics 37. In the present study methanolic extract from squid and cuttle bone powder was tested for anticancer activity against HepG2 liver cancer cells and the cells experienced a significant decrease in viability as the concentration increases. The crude extract obtained from the internal shell of squid contains polysaccharides showed an antitumor activity against mouse sarcoma -180 was reported 37.

The anticancer potential of salivary gland extracts (AGE, PGE) of Octopus ageina in vitro (COLO 205 cells) and in vivo (Albinio Wistar rats). PGE showed promising effects by reduced tumor occurrence 38. There are previous report on the cytotoxic activity of the methanolic extract obtained from flesh of Sepia brevimana and Sepiella inermis using Dalton’s ascites and the cytotoxic acitivity was found to be S.brevimana  >S. innermis 16 .  The results of this study revealed the presence of bioactive compounds in the bone extract of L.duvauceli and S.pharaonis  so it can be used as a source of drug in the treatment of cancer.

CONCLUSION: The results of this study shows that among the two extracts tested here methanol fraction from cuttlebone of S.pharaonis has more toxicity towards Hep G2 cell line than the L.duvauceli and hence cuttlefish are the best targets for cancer therapy. If their nature, structure and mechanism of action are explored they would be a better drugs for site-specific chemotherapy.

ACKNOWLEDGEMENT: The authors are thankful to the Principal of V.O.C. College, Thoothukudi for providing the facilities.  The authors also thank Mrs. Florida Tilton of Biozone Technologies, Chennai for her support to carry out this work.