ABSTRACT: Clerodendrum phlomidis is a shrub common in India and Sri Lanka. It is one of the highly traded medicinal plants from tropical forests, as the leaves and roots are used in folk-lore, Ayurveda, Siddha and Unnani medicines. In this study preliminary phytochemical screening, cytotoxic, antioxidant and GC - MS study of leaf of C. phlomidis was evaluated. Successive extraction of the leaf of C. phlomidis was carried out with 5 solvents petroleum ether, chloroform, ethyl acetate, methanol and water. Antioxidant activity was evaluated using DPPH free radical scavenging assay at four different doses of 31.25, 125, 500 and 1000 µg/mL, cytotoxic potential was studied by brine shrimp lethality assay at four different doses of 1, 10, 100 and 1000 µg/mL. GC-MS analysis of methanol leaf extract was carried out on Thermo GC-TRACE ultra version: 5.0, Thermo MS DSQ II. Phytochemical screening analysis of the extracts indicated the presence of secondary metabolites such as steroids, steroidal glycosides, phenols, saponins, coumarins, alkaloids and flavanoids. Methanol leaf extract showed significant cytotoxic potential with the LC50 value of 9.62 µg/mL and good DPPH free radical scavenging activity with the IC50 value of 71.64 µg/mL. GC-MS analysis of the methanol extract revealed the presence of 17 compounds. Most of the identified compounds possess medicinal values such as antioxidant, antimicrobial, anti inflammatory, vasodilator, analgesic, sedative, dermatitigenic, hypocholesterolemic, antidiabetic, anti-tumor, cancer preventive etc. Methanol extract of the C. phlomidis leaf can be used as a lead for the isolation of the cytotoxic active chemical constituents in further study.

INTRODUCTION: Natural products have been the backbone of traditional system of healing throughout the globe, and have also been an integral part of history and culture.

Clerodendrum phlomidis is a shrub common in India and Sri Lanka. It is one of the highly traded medicinal plants from tropical forests, as the leaves and roots are used in folk-lore, Ayurveda, Siddha and Unani medicines. Different parts of the C. phlomidis plant possess valuable medicinal properties. Leaf is used as remedy to treat diabetes, fever due to sunstroke, malaria, stomach pain, dyspepsia, digestive disorders, eye complaints, lung diseases, rheumatism, asthma, inflammatory diseases, and swellings.

Leaf juice is used to treat mental tensions and mental disturbances in Tamil Nadu. Leaf and leaf juice is used as bitter tonic, alternative and prescribed in syphilitic complaints. Leaf decoction is used for inflammation and is effective in treating bronchitis, headache, weakness, drowsiness and digestive problems 2. Due to the wide application of the leaf in various diseases, in the present study different leaf extracts of C. phlomidis were selected to study for antioxidant activity by DPPH free radical scavenging assay, cytotoxic potential by brine shrimp lethality assay and to identify the chemical constituents by GC-MS study.

Extraction: The leaves were dried in shade and homogenized to coarse powder and stored in opaque screw tight jars until use. Powdered drug was charged into soxhlet apparatus and successive extraction was carried out with the solvents in the following order petroleum ether (40 - 60 °C), chloroform, ethyl acetate, methanol and water till exhausted. Each time before employing the solvent of higher polarity the marc was dried. Each extract was then concentrated using rotary vacuum evaporator at 50 °C under vacuum and dried residue was stored in an opaque glass bottles for further studies.

Preliminary Qualitative Phytochemical Screening: All the extracts were studied for the presence and absence of secondary metabolites such as alkaloids, carbohydrates, glycosides, saponins, proteins and aminoacids, phytosterols, phenolics, flavonoids, and tannins by qualitative chemical tests.

DPPH Free Radical Scavenging Activity: Free radical scavenging activity was done by DPPH assay method. DPPH is a stable free radical and accept an electron, or hydrogen radical to become a stable diamagnetic molecule. DPPH reacts with an antioxidant compound that can donate hydrogen and get reduced. The change in colour (from deep violet to light yellow) was measured. The intensity of the yellow colour depends on the amount and nature of free radical scavenger present 3. DPPH stock solution of 100.0 μM was prepared using methanol as the solvent  To 1.0 mL of 100.0 μM DPPH solution in methanol, equal volume of the sample in methanol of different concentrations (31.25, 125, 500 and 1000 µg/mL) were added separately and incubated in dark for 30 minutes. The change in coloration was observed in terms of absorbance using a spectrophotometer at 514 nm. 1.0 mL of methanol instead of test sample was added to the control tube. The different concentrations of ascorbic acid (31.25, 125, 500 and 1000 µg/mL) was used as reference compound to check that the procedures are working correctly 4. Each concentration was tested in triplicate. Percentage inhibition was calculated from the equation; 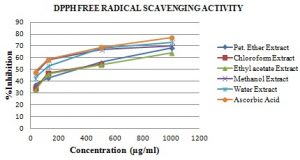 Brine Shrimp Lethality Assay (BSLA): Brine shrimp eggs, Artemia salina, were hatched in artificial seawater prepared by dissolving 38 g of sea salt in 1 lit of distilled water. After 24 hours of incubation period at room temperature, the shrimps hatched as nauplii (Artemia salina) and a lamp was placed above the open side of the tank to attract the hatched shrimps close to the tank wall. The brine shrimp lethality bioassay was carried out on the different extract using the standard procedure 5 - 8. Twenty milligrams of the various extract were dissolved in 1 mL of Propyleneglycol: Tween 80: water (4:1:4) to give a crude extract concentration of 20 mg/mL. A two-fold serial dilution was carried out with salt water to obtain a test solution in the range of 1 - 1000 µg/mL. Each concentration was tested in triplicate. A test tube containing propyleneglycol: Tween 80: water (4:1:4) in 5 mL of salt water was used as the drug free control or negative control (blank). Ten milligrams of reference standard potassium dichromate (positive control) was dissolved in prophyleneglycol: Tween 80: water (4:1:4) and serially diluted, to obtain test concentrations ranging from 1 to 1000 µg/mL. A suspension of 0.1 mL, containing 10 larvae was counted and added into each test tube of different concentrations and incubated for 24 hours. The test tubes were then examined, and the number of live nauplii in each test tube was counted and recorded. The percentage mortality and lethal concentration (LC50) were determined using statistical analysis. 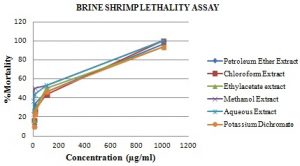 Gas Chromatography-Mass Spectrometry (GC-MS) Analysis: Mass spectrometry, coupled with gas chromatography (GC-MS) is normally used for direct analysis of components existing in traditional medicines and medicinal plants. In recent years GC-MS studies have been increasingly applied for the analysis of medicinal plants as this technique has proved to be a valuable method for the analysis of non polar components and volatile essential oil, fatty acids, lipids and alkaloids 9, 10. Methanol leaf extract of C. phlomidis showed significant cytotoxic and antioxidant activity compared to other extracts. Hence GC-MS Study was carried out with methanol leaf extract to determine the possible chemical components present.

TABLE 5: COMPOUNDS IDENTIFIED FROM METHANOL EXTRACT OF C. PHLOMIDIS BY GC-MS ANALYSIS ALONG WITH THEIR STRUCTURE AND BIOLOGICAL ACTIVITY

RESULTS AND DISCUSSION: The use of phytoconstituents as drug therapy to scavenge free radicals and to treat disorders due to oxidative stress has proved to be clinically effective and relatively less toxic than the existing drugs. Therefore it is the demand of time to use drugs from plant sources or phytoconstituents to prevent and/or treat oxidative stress 19. To test the antioxidant potential of the leaf extracts of C. phlomidis, DPPH free radical scavenging assay was used. In DPPH Free radical scavenging assay, methanol and water leaf extract of C. phlomidis showed good antioxidant activity with an IC50 value of 71.64 µg/mL and 94.17 µg/mL respectively Table 2.

Brine shrimp lethality bioassay is a simple, high throughput cytotoxicity test of bioactive chemicals. It is based on the killing ability of test compounds on a simple zoological organism-brine shrimp (Artemia salina) 20. In brine shrimp lethality assay, methanol leaf extract of C. phlomidis showed significant cytotoxic potential with the LC50 value of 9.62 µg/mL Table 3. GC-MS analysis of the methanol leaf extract of C. phlomidis revealed the presence of seventeen compounds. The identification of the chemical constituents was confirmed based on the retention time, molecular formula and molecular weight by matching with the Wiley spectral library search programme. The active principles with their retention time (RT), molecular formula and molecular weight are presented in Table 4.

CONCLUSION: Preliminary phytochemical screening of leaf of C. phlomidis indicated the presence of the secondary metabolites such as steroids, steroidal glycosides, phenols, saponins, coumarins, alkaloids and flavanoids. C. phlomidis methanol leaf extract has significant cytotoxic and antioxidant potential; also indicating the presence of chemical constituents responsible for the activity which are being identified by the GC-MS analysis. Methanol extract of the C. phlomidis leaf can be used as a lead for the isolation of the cytotoxic active chemical constituents in further studies.

ACKNOWLEDGEMENT: The authors are highly thankful to Hillside College of Pharmacy and Research centre for the needful support provided for carrying out the experiment.

CONFLICT OF INTEREST: The authors declared that there is no conflict of interests.