ABSTRACT: Metronidazole is a class I drug in biopharmaceutics classification system (BCS) and widely used in Pakistan, various available brands in local markets along with innovator brand to serve a large population. In-vitro dissolution testing can be used as waiver for in-vivo bioequivalence studies of generic brand interchangeability for Class I drugs i.e., highly soluble and highly permeable. The objective of the study was to determine immediate release tablet dosage form of metronidazole to fulfil the requirements of 85% drug release in pH 1.2, 4.5 and 6.8 recommended by WHO. In this study physicochemical quality attributes, price comparison and dissolution studies were performed on three available brands of metronidazole 400 mg, one of them is innovator brand and the two others are test brands. The dissolution profiles were compared by using similarity factor (f2) that were analyzed by UV spectrophotometer at 278 nm wavelength. The test brands were very cheap in cost as compared to innovator brand but both the test brand were failed the dissolution test in all mediums and only innovator brand showed 85% drug release within 30 minutes. The study suggested test brands are not equivalent or similar to innovator brand. In-vivo bioequivalence studies are thus needed for test brands to strengthen this in-vitro finding.

INTRODUCTION: Metronidazole is a synthetic nitroimidazole derivative, chemically metronidazole is [2-(2-methyl-5-nitro-1H-imidazol-1-yl) ethanol] with molecular weight of 171.15 g/mol and classified according to BCS as Class I drug i.e., highly soluble and highly permeable 1. In Pakistan, various brands of metronidazole immediate release tablets are available including both innovator brand and generic drug products.

For determination of therapeutic effectiveness, the aspects of safety, quality and purity has to be evaluated. Class I includes drugs with high solubility and high permeability. A waiver is recommended for Class I drugs may if 85% or more of drug content is released in 15 min (very rapid release) in three different buffer solutions or f2 statistics may needed to compared when greater than 85% is released in 30 min (rapid release) 5, 8.

This study designed for comparison of the dissolution results for two generic products of metronidazole (BCS Class I drugs) available in markets of Pakistan with those of the innovator products. Also investigated immediate-release tablets of metronidazole fulfill the requirements of 85% or more drug release in 15 or 30 min in all three buffers (pH 1.2, pH 4.5 and pH 6.8) using in vitro dissolution testing. Drug release was assessed for bioequivalence in accordance with the WHO requirements 4 for biowaivers for immediate-release tablets containing metronidazole.

Physicochemical attributes: Weight variation, diameter and thickness were tested on twenty units of each brand, whereas hardness and disintegration was performed on ten and six units respectively with recommendations of USP 9.

Cost Comparison: The differences of price of test brands were compared with innovator brand price by using formula given 10

In-vitro Dissolution test: The drug release profile of metronidazole tablets was determined in 900ml buffer solutions of pH 1.2, 4.5 and 6.8 prepared according to USP at 50 rpm in apparatus II at temperature 37 °C ± 0.5. 10ml of samples were collected after predetermined time interval i.e., 5, 10, 15, 30, 45, 60, 90 and 120 min and replaced by freshly prepared medium at the same time in order to maintain sink condition. Further dilution of samples is made by taking 0.45ml sample and makeup its volume up to 10ml with respective medium. Absorbance of all the samples is taken at wavelength of 278nm by UV Spectrophotometer so that concentration in each time interval can be determined 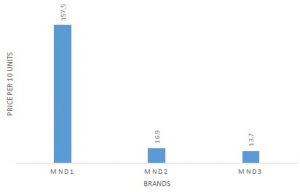 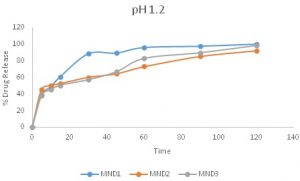 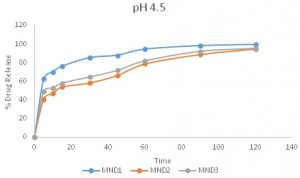 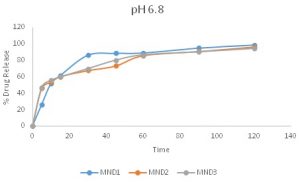 DISCUSSION: In developing countries like Pakistan only innovator brand by multinational manufacturer is not enough to serve all population, in market local manufacturing of various brands of same generic are also available. The present study was designed to check the quality of locally available brands of metronidazole 400 mg tablets in Karachi, Pakistan and compared with an innovator brand. Various physicochemical attributes were performed including weight variation, thickness, diameter, hardness, disintegration and dissolution were tested. For interchangeability metronidazole tablets (Class I drugs) were tested by using in-vitro dissolution testing in pH 1.2, 4.5 and 6.8.

The cost of 10 units of innovator brand (MND1) was 157.50 and test brands (MND2 and MND3) were 16.90 and 13.70 rupees respectively, price differences of test brands were 146% and 148% which is very cheap in comparison with innovator brand (Table 1) and can be affordable with most of population of developing country like Pakistan.

From Pakistan there were not enough studies have published for interchangeability of metronidazole immediate release tablet dosage forms available in local markets. Metronidazole is a class I drug i.e., highly soluble and highly permeable in Biopharmecutics Classification System (BCS) 15. In this study we also performed dissolution test pH 1.2, 4.5 and 6.8 to determine 85% drug release in 30 minutes in accordance with WHO requirement for biowaiver of immediate release dosage form of class I drug, the innovator or reference brand resulted 85% drug release within 30 minutes in all mediums and none of the test brand was released 85% in 30 minutes (Table 3). The % drug release of reference brand (MND1) in pH 1.2, 4.5 and 6.8 were 88.6%, 85.23%,86.46 %, whereas test brands MND2 and MND3 were 60.25%, 58.39%, 67.7 and 57.14%, 64.6 % and 69.88% respectively (Fig. 2-4). Previously a study was conducted to compare various brands of metronidazole to comparator pharmaceutical product (Innovator or reference brand) and found none of tested metronidazole product in-vitro equivalent 16. Another study resulted only 8 out of 11 metronidazole tested products resulted as very rapidly dissolving as defined by the WHO, whereas 2 of them failed f2 acceptance criteria in pH 6.8 7. In-vitro dissolution was used in several studies for therapeutic equivalence of metronidazole tablets, a study from Nigeria showed 8 out of 12 tested brands of metronidazole in-vitro equivalent 17, a study published revealed all tested brands found equivalent and can be use as substitution 18.

In the present study none of the test product passed f2 acceptance, the excipients quality and manufacturing process are key factors for proper dissolution and timely drug release of test brands in the same way as the reference product 19. Health care concern should have prescribed the innovator brand for better treatment outcomes of metronidazole therapy. This study also suggested that test brands of metronidazole immediate release tablets used were not fulfilled the requirement of WHO for biowaiver of class I drug, cannot be used as interchangeable pharmaceutical product and further recommended for in-vivo bioequivalence studies.