ABSTRACT: The objective of the study was to formulate and evaluate controlled release glipizide matrix tablets for the release rate, release patterns, and the mechanism involved in the release process of the drug. Formulations with hydrophobic and hydrophilic polymer in several drug-to-polymer ratios and using water-soluble and water-insoluble diluents were compressed into tablets using the direct compression method. By using an eight-station dissolution rate test apparatus, the drug release study was analyzed in phosphate buffer of pH 7.4. For the determination of the release mechanism and drug release kinetics, various mathematical/kinetic models were employed. Release was relatively faster with water-soluble diluent lactose when compared to water-insoluble diluent dicalcium phosphate (DCP) at all concentrations of Starch Acetate (SA) and Ethylene Vinyl Acetate copolymer (EVA). The difference factor f1 and similarity factor f2 between prepared formulation TSAF2 and the marketed formulation was found to be similar. Therefore matrix tablets prepared to employ starch acetate (TSAF2) are considered suitable for controlled release of Glipizide over 24 h (i.e. once-a-day administration).

INTRODUCTION: Oral hypoglycemic agents represent the most commonly practiced pharmacological approach to the treatment of NIDDM. Most of the physicians initially use sulphonylurea medications in the management of NIDDM because they have a long history of proven efficacy and safety 1-4.

Differences in the pharmacokinetic and pharmaco-dynamic characters of the various sulfonylurea compounds produce different therapeutic side effect profiles 5.

Short-acting sulfonylurea such as Glipizide is thought to be more efficacious in enhancing post-prandial insulin secretion and generally has a lower risk of hypoglycaemia 6-11. But Glipizide has a short biological half-life of 3.4 ± 0.7 h, needs to be administered more than once a day, which increases the possibility of non-compliance and produces greater fluctuations in plasma drug levels both above and below the therapeutic range 12-13. The drug profile makes a glipizide a suitable candidate for formulating a controlled release dosage form. This will reduce the frequent dosage administration necessary to control hyperglycemia. It also maintains the optimum therapeutic drug concentrations with reduced adverse effects and finally will improve patient compliance.

Controlled release formulations of Glipizide will provide more stable therapeutic plasma drug concentrations over longer periods of time. This not only assists better glycemic control but also produces less fasting insulinemia. The incidence of hypoglycemia with controlled release formulations of Glipizide is low (less than 3%) 14. Drug delivery systems are classified according to the mechanism controlling the release of the drug. The number of polymers and the range of formulation variables available to control the rates of drug release from controlled release systems are broad. Selection among these variables is based upon the desired release rate and duration, the physical and chemical properties of the drug, and the intended site of application 15.

In controlled delivery systems, polymers are used to control the release rate of the drug into the systemic circulation from the site of absorption and are used mainly in oral preparations such as capsules and tablets. These polymers in particle form combine with the drug particles, and thus the release rate of the drug from its moiety or matrix tablets is controlled in a constant manner for a specific period of time, either preferably up to 24 h. The controlled release drug delivery system is concerned with the maintenance of drug plasma levels in an optimum range so as to reduce toxicity 16. In controlled release dosage forms, the drug release rate from the tablet is influenced by different factors, which are directly related to both the physical and chemical properties of the drug and also to its dosage form. Mostly these factors are associated with the polymers used in the formulations and show a tremendous influence on the release of drugs from the polymeric tablets. In the present investigation, studies are carried out on the preparation of matrix tablets employing starch acetate (SA) and EVA with water-soluble diluent lactose when compared to water-insoluble diluent DCP with an objective of making a comparative evaluation of their permeability and drug release characteristics for controlled release application.

Preparation of Matrix Tablets: Matrix tablets of Glipizide were prepared by using Starch acetate and EVA as polymer. The required quantities of medicament, diluent (lactose/DCP), and matrix materials were mixed thoroughly in a mortar by geometric dilution technique. The granulating fluid (a solvent blend of water and alcohol in 1:1 ratio) was added and mixed thoroughly to form dough mass.

Physical Characterization of Manufactured Tablets: The hardness of the matrix tablets prepared was tested using a Monsanto hardness tester. The Friability of the matrix tablets prepared was determined in a Roche friabilator. Disintegration time was determined in the tablet disintegration test machine using water, 0.1 N HCl, and phosphate buffer of pH 7.4 as test fluids. Five tablets were accurately weighed and powdered.

Tablets powder equivalent to 20 mg of the drug was taken for assay into 25 ml volumetric flask, and 20 ml of methanol were added. The mixture was shaken thoroughly for about 30 min. to extract Glipizide. The methanolic solution was subsequently diluted suitably with a phosphate buffer of pH 7.4 and assayed for Glipizide at 223 nm. Glipizide content of the tablets was calculated using the calibration curve.

Drug Release Study: Drug release of Glipizide from the matrix tablets prepared was studied in phosphate buffer of pH 7.4 (900 ml) using an eight-station dissolution rate test apparatus with a paddle stirrer at 50 rpm and 37 + 0.5 ºC. A sample matrix tablet equivalent to 10 mg of Glipizide were used in each test. Samples of dissolution fluid were analyzed at 223 nm for Glipizide using Perkin Elmer (Lambda 35) UV Spectrophotometer. The drug release experiments were conducted in triplicate.

Analysis of Release Data: The release rate and mechanism of release of drug from the prepared matrix tablets were analyzed by fitting the release data into 17, 18.

Where Q is the amount of drug release at time t, K0 is the release rate

Where K1 is the release rate constant

Where Q is the amount of drug release at time t, K2 is the diffusion rate constant.

Where Mt/M∞ is the fractional release of the drug, t is the release time, K is a constant incorporating structural and geometric characteristic of the release device, ‘n’ is the release exponent indicative of mechanism of release.

It has a value ranging between 50 and 100. The f2 values less than 50 indicate the dissimilarity between the release profiles of the drug.

Preparation of Matrix Tablets: Matrix tablets of Glipizide could be prepared employing different proportions of Starch acetate, a new modified starch, and EVA by conventional wet granulation method. Two diluents, namely lactose (water-soluble) and DCP (water-insoluble), were included in the formulations to assess their influence on drug release characteristics of starch acetate and EVA matrix tablets. Starch acetate and EVA were added at 2, 5, 10 % strength in the matrix.

Physical Characterization of Manufactured Tablets: Physical properties of these matrix tablets are given in Table 1. The hardness of the tablets was in the range of 5-6 kg/cm2.

Weight loss in the friability test was less than 0.32 % in all the cases. All the matrix tablets formulated contained 100 ± 5.0% of the labeled claim.

All the matrix tablets were found to be non- disintegrating in water, acidic (pH 1.2), and alkaline (pH 7.4) fluids. 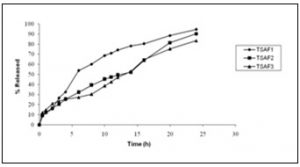 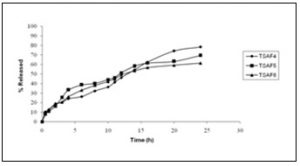 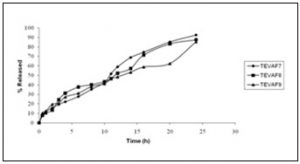 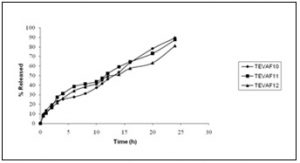 Analysis of Release Data: Analysis of release data as per zero-order and first-order kinetic models indicated that the drug release from the tablets followed first-order kinetics. The correlation coefficient (R2) values were higher in the first-order model than in the zero-order model Table 2. When the release data were analyzed as per Peppa’s equation, the release exponent ‘n’ was in the range 0.5311 – 0.7111 with all the matrix tablets indicating non - Fickian (anomalous) diffusion as the release mechanism from all the matrix tablets formulated with starch acetate and EVA.  Plots of percent released versus square root of time were found to be linear with   (R2> 0.9225) with all the matrix tablets formulated, indicating that the drug release from these tablets was diffusion controlled.

Starch acetate and EVA proportion (%) in the matrix tablets was increased, release rate was decreased in both the series formulated using lactose or DCP as diluent. Good linear relationships were observed between percent polymer and release rate in each case.

Thus, drug release from the matrix tablets could be controlled by varying the proportion of drug: polymer in the matrix. The results of the study thus indicated starch acetate and EVA could be used as rate controlling matrix in the design of controlled-release tablets.

Both water-soluble and water-insoluble diluents can be included in the starch acetate and EVA matrix tablets without affecting its rate-controlling efficiency.   For comparison, glipizide release from one commercial brand (Glynase XL) tablets to the release profiles of formulated matrix tablets was also studied Fig. 5. Glipizide release from matrix tablets (TSAF2) formulated employing 5% starch acetate polymer was spread over 24 h and was similar to that from Glynase XL tablets, a commercial product of Glipizide. 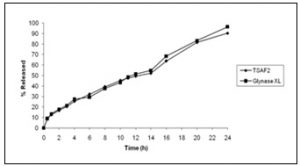 The values of f1 and f2 were found to be 5.05 and 77.63, respectively, for the comparison of release profiles of formulation TSAF2 and Glynase XL tablets indicating that the release profiles of these two products are similar. Hence, matrix tablets formulated employing starch acetate (TSAF2) are considered suitable for controlled release of Glipizide over 24 h (i.e., once-a-day administration).

TABLE 3:  EVALUATION OF F1 AND F2 FOR THE COMPARISON OF DRUG RELEASE PROFILES OF PREPARED FORMULATION

CONCLUSION: Preparation of drug embedded matrix tablets is the least complicated technique for controlled release and is widely used in industry. This technique was selected for the design of controlled release drug delivery systems employing Starch Acetate and EVA with Glipizide.

Matrix tablets of Glipizide prepared were found to be non-disintegrating in water, acidic (pH 1.2), and alkaline (pH 7.4) fluids. As the tablets formulated employing starch acetate and EVA in both cases were non-disintegrating in acidic and alkaline fluids, they are considered suitable for oral controlled release. Glipizide release from the matrix tablets formulated was slow and spread over 24 h and depended on the concentration (%) of polymer (i.e., starch acetate and EVA) in the matrix tablets and nature/type of diluent used.