ABSTRACT: Kidney stones are a global affliction causing a great deal of morbidity and economic loss. The prevalence and control of nephrolithiasis are very important. Herbs and herbal drugs have created interest among the people by their clinically proven effects like immunomodulation, adaptogenic, and antimutagenic. Also, the overuse of synthetic drugs, which results in a higher incidence of adverse drug reactions, has motivated humans to return to nature for safe remedies. The problem of kidney stones or calculi has been a great concern since ancient times and many remedies have been employed. During the ages, these stones are found in all parts of the urinary tract, the kidney, the ureters, and the urinary bladder and may vary considerably in size. In the present investigation, an attempt has been made to emphasis on the studies like in-vitro Biomineralization, Scanning Electron Microscope (SEM) t-RNA sequencing and an herbal option for kidney stone problem based on the promising results obtained in the present study.

INTRODUCTION: Herbs and herbal drugs have created interest among the people by their clinically proven effects like immunomodulation, adapto-genic, and antimutagenic. Also, the overuse of synthetic drugs, which results in a higher incidence of adverse drug reactions, has motivated humans to return to nature for safe remedies. The origins, according to many, can be sourced to the World Health Organization’s Canberra conference in 1976, which promoted the concept of ‘Traditional’ medicines for the developing countries 1.

A diet containing low amounts of inferior quality proteins and high intake of animal proteins might augment the risk of stone formation. The incidence of urolithiasis is very common in Northern India compared to the southern state. It is speculated that higher incidence may be due to wheat diets.

People living in rocky areas, where the climate is hot and dry, seem to be more to urinary calculi disease 2. Physicians usually do not treat kidney stone: they just medicate the pain until the stones pass out their own; and given Dake, near-vegetarian diet, heavy on herbs and liquids, can be helpful in the prevention and treatment of kidney stone. So the best way to prevent kidney stone is to drink plenty of water. Cystone tablets are an ayurvedic treatment for stones, traditionally practiced in India, and represents a candidate for further investigation.

Many studies and long experience attest to the safety of this compound. It is claimed by the manufacturer that Cystone decreases urinary supersaturation or micro pulverizer and expels kidney stones, but existing studies have been limited by small patient numbers, weak methodology, and poor study design including lack of proper controls. Therefore, in this study, we rigorously evaluated the ability of Cystone to decrease urine determinants of kidney stone formation and to prevent new stone formation and growth of existing stones.

Stones: Aseptically removed Ten Kidney stones were collected from (SGS Hospital, Erode, and Tamilnadu) patients. One fragment of each stone was preserved for culture analysis, in-vitro biomineralization, Scanning electron microscope (SEM) and Energy dispersive X-ray microanalysis (EDX) studies according to the standard method for clinical use 4.

In-vitro Biomineralisation and SEM Studies: Stones were manually ground to a powder with a Potter device. One part of each powdered stone was demineralized in 1 M HCl for 10 min. at room temperature (37 °C) and then neutralized by addition of 10 µl of 1 M NaOH and 2 ml of Dulbecco-Vogt’s modification of Eagle’s medium (DMEM) –10% (FBS). Finally, the suspension was filtered through a 0.22µm pore- size filter (Millipore).  Stainless (SS) coupons of the size 1 × 3 cm were immersed in duplicate in two sets of DMEM added with commercially available Cystone from the local market and without Cystone. Both the media were inoculated with 0.5 ml of the stone suspension and incubated at 37 °C. The medium was renewed daily without the inoculum of stone suspension. The system was maintained for 30 days.

Suitable control (without bacterial culture inoculum) was also maintained. The SS coupons were inspected macroscopically and microscopically weekly for biofilm formation and calcification. The presence of bacteria was monitored by EPI fluorescence microscope and by PCR-based detection of the universal 16S rRNA gene as previously described 8, 9. For energy dispersive X-ray microanalysis (EDX), a 30-day old nanobacterial culture was harvested by centrifugation at 20,000 rpm for 30 min at 4 ºC. The bacterial pellet (biofilm) was washed in a phosphate buffered solution (pH 7.2). The biofilm developed on SS coupon was dehydrated in absolute alcohol and air-dried overnight. The sample was further processed for SEM and EDX analysis.

Identification of Nanobacteria by 16S rRNA based Characterization and Phylogenetic Analysis: Furthermore, the nanobacteria isolated from a human kidney stone, which were employed in-vitro study were identified by universal 16 S tRNA sequencing technique.

The genomic DNA was isolated from the four isolates according to the procedure described by Murmur et al., 1 and the small subunit rRNA gene was amplified using the two primers 16S1 (5’-GAGTTTGATCCTGGCTCA-3’) & 16S2 (5’- CGGCTACCTTGTTACGACTT-3’). The purified PCR product, approximately 1.5Kb in length, was sequenced using five forward and one reverse primer, as described earlier 2. The deduced sequence was subjected to blast search for the closest match in the database. The 16S rRNA gene sequence of calcium depositing bacteria isolated from the kidney stone Enterobacter hormaechei isolate SPA and Klebsiella sp. isolate SPB was submitted to the Gene bank. The pairwise evolutionary distances were computed using the DNA DIST program with the Kimura 2 parameter model 3. The phylogenetic trees were constructed by using four tree making algorithms (the UPGMA, KITSCH, FITCH, and DNAPARS) of the PHYLIP package 4. The stability among the clads of the phylogenetic tree was assessed by taking 100 replicates of the dataset analyzing them using the programs SEQBOOT, DNADIST, UPGMA, and CONSENSE of the PHYLIP package.

In-vitro Biomineralisation Study: Scanning Electron microscopic images are shown in Fig. 1, 1a, 1b and 1c. The SEM image of the control sample which received only culture medium does not show anything Fig. 1a while the SS coupons those were exposed to culture medium added with Cystone and nanobacterial culture showed the presence of the bacterial cells Fig. 1b. The SEM images of the samples that were exposed to a medium free from Cystone but with nanobacterial culture showed aggregates of differently shaped particles Fig. 1c.

Product Analysis by XRD and EDX: The results of x-ray diffraction analysis showed the presence of only hydroxylapatite mineral phase, and the same was also confirmed with the elemental analysis by Energy dispersive X-ray (EDX) Fig. 2. The control medium does not contain any minerals like Ca, P, and Mg Fig. 2a. Bacterial pellets obtained after 30 days of subculture were analyzed for their inorganic chemical constituents using EDX. The nanobacterial pellet showed the presence of Ca, P, and Mg, etc. However, the predominant constituents were found to be calcium (2.55%) and phosphorus (2.15%) Fig. 2b.

Calcium Depositing Nanobacteria in Kidney Stone: The calcium depositing bacteria isolated from the kidney stone were identified as Enterobacter hormaechei and Klebsiella sp by the 16S rRNA gene sequence method and both the isolates SPA and SPB were submitted to the Gene bank (AC No. FJ 999766 & FJ 999767). 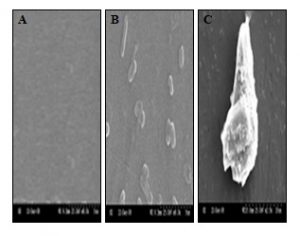 DISCUSSION: Nanobacteria are the smallest cell-walled bacteria, discovered in human by Kajander & Ciftcioglu, (1978).  Biocrystallization of calcium is encountered in many diseases such as kidney stone disease, atherosclerosis, chronic pancreatitis, rheumatoid arthritis, and various other tissues in the body 1. It has been proposed that nanobacteria may serve as biomineralization centers as they produce carbonate apatite on their cell walls for the initiation of kidney stones. Bacteria and other cell types can create nucleation sites or nucleus, which is considered to be central in the genesis of kidney stones 8, 9. Recently, it was reported that a novel bacteria, nanobacteria, may be involved in the genesis of renal stones. These bacteria have been isolated from renal stones 9, 10. These are the smallest described bacteria to date and are phylogenetically close relatives of mineral forming bacteria 11, 12. Nanobacteria have been shown to mineralize calcium and phosphate even under physiological conditions, indicating that these bacteria could have a contributory role in urolithiasis 13, 14.

In the present study also, in-vitro biomineralization study revealed the formation of stone by nanobacteria isolated from the human kidney stone. In the present investigation, the in vitro biomineralization study was carried out using the stainless coupon as a substrate. SEM observation indicates the stone formation on SS. Thus, confirming the view of Kajander (2001) who reported that nanobacteria do adhere rapidly and effectively on a stainless steal.

EDX analysis revealed the presence of calcium, magnesium, and phosphorous in the apatite formed by the nanobacteria.  In an experiment made in the present study, the nanobacterial cells were found to incorporate calcium present in the medium, which resulted in the concomitant decrease of calcium level in the medium. This observation is in good agreement with Madhu khullar et al., (2004) who reported an exponential increase in the calcium content of the bacterial pellet with time.  It can be explained that bacteria being negatively charged bodies, the adsorption of calcium, magnesium, sodium, etc. which facilitate the formation of apatite, are accelerated. Also, embeddable bacteria can be noticed on the so-called stone or deposit.

It can be seen from the SEM images that numerous bacterial cells were found aggregated together, as reported by Ciftcioglu et al., (1998).

EDX data showed a higher mass percentage value of magnesium (58.81%). It indicates that magnesium is the major constituent and plays an important role in the formation of kidney stone by aggregating more number of cells together.

From time to time, various workers have suggested different types of precautions, medications, and diet restriction for the prevention of Human kidney stone formation. Elucidation of the efficacy of any drug in the prevention of calculus formation and its mode of action, starting from the inception of the stone is only possible by experimental study. The present study showed that the polyherbal Ayurvedic formulation, Cystone (1000 mg/kg i.p.) offered significant protection against Human Kidney stone formation.

CONCLUSION: In an experiment conducted in the present study it was observed that Cystone treated medium did not support calcification while the bacterial cells in the culture medium prepared without Cystone developed into a kidney stone like mass comprised primarily of Ca, and P. Thus the present study is in good agreement with earlier study by Mitra et al., 12 who reported the reduction in the stone forming constituents in urine and renal tissue brought about by Cystone treatment. Further, the present study also supports the work of Gupta and Singh 13 who showed good results with Cystone tablets in propelling urinary stones of less than 0.5 cm in diameter.