University College of Pharmacy, University of the Punjab ², Lahore, Pakistan

Mitragyna speciosa Korth. is a member of the Rubiaceae family. More than 25 alkaloids have been isolated from Mitragyna speciosa. Mitragynine is the major alkaloid of this plant and is responsible for antinociceptive action. No single study is available about the effect of mitragynine on aminopyrine N-demethylase activity in rat hepatocytes. Experiments were undertaken to evaluate the effect of mitragynine in different age groups (adult & old) of Sprague- Dawley (SD) male and female rat hepatocytes. In vitro this evaluation was assessed by different concentration of mitragynine (0.0025µM-250µM).Hepatocytes were prepared by collagenase perfusion technique. Aminopyrine N-demethylase activity was determined by measuring the quantity of formaldehyde formed. Results showed that a significant increase in aminopyrine N-demethylase activity was observed in the adult male, female and old female SD rat hepatocytes treated with 250µM mitragynine (p< 0.05). However, the old male rat did not show any significant change at any concentration of mitragynine. In conclusion this study indicates the induction of hepatic drug metabolizing enzymes by mitragynine is affected by the aging process in male but unaffected in female.

INTRODUCTION:Natural products have served as a major source of drugs for centuries; about half of the drugs in use today are derived from them. Herbal medicine, quinine, theophylline, cyclosporine, penicillin G, morphine, digoxin, vincristine all are cornerstones of modern pharmaceutical care and they are herbal medicine. Herbal derived medicines are often administered orally and can attain moderate to high concentration in the liver. CYP3A4 are abundantly expressed in hepatocytes. The modulation of hepatic CYP3A4 by herbal medicines represents a potentially important mechanism by which the bioavailability of co-administered drugs can be modulated 1.

Advances in detection of herbal drug component have increased the understanding of the relation between the specific component and effects. There is widespread concern on the harmful effects of herbal drugs consequently leading to a greater numbers of studies carried out on herbal drug interactions 2, 3, 4.

A new herbal drug Mitragyna speciosa has strong abuse potential 5. It is found in tropical and subtropical regions of Asia, indigenous to Thailand, where is called kratom 6 and in Malaysia it is called ketum. It can also be found in Cambodia, East and West Africa and in India 7. In Malaysian folk medicine, the leaves are used to treat diarrhea, fever, asthma, antihypertensive, pain and as substitute for opium or morphine in the treatment of drug addicts 8. In particularly the increase use of ketum as self management of opioid withdrawal without proper scientific bases is currently leading to its wide abuse.

Mitragynine was isolated from Mitragyna speciosa in 1907 by Hooper, a process repeated in 1921 by Field who gave the alkaloid its name and structure formula C22H31O5N. Its structure was first fully determined by Zacharis 9. Mitragynine is the most abundant active alkaloid in the plant. Jansen reported that mitragynine causes hypothermia in animals in addition to opiate-like effect 10. Vicknasingam demonstrated that side effects and withdrawal symptoms from ketum addiction are less intensive, less life threatening than morphine 11. To date there is no study available on hepatic drug metabolism of mitragynine. Therefore the following experiments are designed to evaluate in vitro effect of mitragynine on phase I metabolizing enzymes in Sprague Dawley (SD) rat hepatocytes.

Cytochrome P450 consists of a family of closely related isoforms embedded in the membrane of the endoplasmic reticulum. CYP450 is responsible for the oxidation of almost all drugs 12. Liver contains the largest amount of CYP protein in the body.  In vitro aminopyrine N-demethylase assay is one of the simple and effective methods to evaluate the potential of the drugs or medicinal plants inhibition/induction towards CYP mediated metabolism.

Aminopyrine is subsequently N-demethylated by liver microsomes to give first monomethylaminoantipyrine and then aminoantipyrine 13. Enzyme activity is easily assayed by measurement of the resulting formal-dehyde with Nash reagent. Multiple cytochrome P450 are involved in aminopyrine metabolism.

Among the hepatic cytochrome P450, the N-demethylation of aminopyrine was catalysed most efficiently by CYP2C19, followed by CYP2C8, CYP2D6, CYP2C18 and CYP1A2 14. Therefore, aminopyrine is suitable substrate for assessment of induction/ inhibition of the CYPs by the herbs or drugs. Specific isoenzymes involved in drug metabolism showed that their activities are different between male and female. The activity of CYP2B6, CYP2A6 and CYP3A4 showed a higher activity in women than in men whereas the activity of many other enzymes possesses a high activity in men than in women 15, 16.

With an overview of the drug metabolism profile, predictions on the occurrence of herb-drug interaction, drug toxicity and adverse effects can be made and evaluated in different gender.

Mitragyna speciosa leaves were collected from Malaysia. Mitragynine extraction from leaves was carried out at the Centre for Drug Research, Universiti Sains Malaysia, Penang.

Experimental Animal: Experimental animals bred in the animal house of the Universiti Sains Malaysia, Penang. In this study, Sprague-Dawley (SD) rats were divided into 2 main groups (normal and diabetic rats). Each group were divided into 2 sub-groups, adult male and adult female (16 weeks old); body weight range (200 g- 250 g) & old male and old female (>42 weeks old); body weight range (300 g- 350 g). Animals caged according to their age, weight and sex. They had free access to water and food ad libitum. The study was approved by the Animal Ethics Committee, Universiti Sains Malaysia, and Penang, Malaysia. Mitragynine was dissolved in 20% (v/v) Tween 20 and serial dilutions (0.0025µM - 250µM) were prepared with distilled water.  Tween 20 is judged to be well tolerated in rats as measured in liver studies 17.

Equal volume (1.0 ml) of serial dilutions of mitragynine (0.0025µM - 250µM) were added into petridishes containing aminopyrine (25mM), freshly isolated hepatocytes (6 x10³ cells) and incubation medium. Control dishes containing all of the above with the exception of the mitragynine, being replaced with distilled water. All petri dishes were then incubated on table top shaker (Belly dancer®) for 18 minutes at room temperature. The reaction was terminated by adding 25% (w/v) ZnSO4 and followed by saturated Ba(OH)2  after 5 minutes.

The samples were centrifuged at 1000 rpm for 5 minutes. 2ml Nash reagent was added in 1 ml of supernatant and incubated at 60oC for 30 minutes in a water bath shaker. Aminopyrine N-demethylase activity was determined by measuring the quantity of formaldehyde formed according to the colorimetric method of Nash 19. N-demethylase activity was expressed (µg/ml) in term of formaldehyde formed.

RESULTS AND DISCUSSION: Mitragynine increased the aminopyrine N-demethylase activity is shown in Fig. 1. It increased the formaldehyde formation as compared to positive control. There was a significant (p< 0.05) increase in formaldehyde formation 1.87±0.27 and 2.55±0.25µg/ml in adult male rats at the concentration 25µM and 250µM of mitragynine respectively. Old male rats did not show any significant change in N-demethylase activity by mitragynine at any concentration. 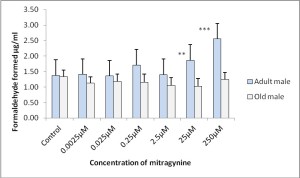 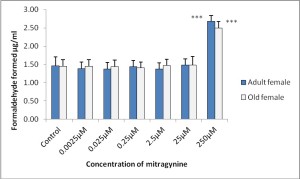 The univariate analysis result was showed that the elevation of aminopyrine N-demethylase activity by mitragynine in rat hepatocytes affected by age and sex of the rats. The effect of mitragynine on phase I hepatic drug metabolizing enzymes in different gender of the rat are shown in Fig. 3 & 4. In the adult groups, the percentage of formaldehyde formation was higher 185% in male rat hepatocytes as compared to 183% in female rats. 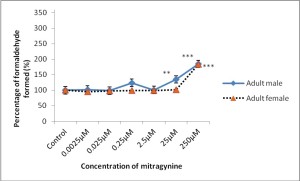 FIG. 3: PERCENTAGE OF FORMALDEHYDE FORMED IN ADULT MALE AND FEMALE RATHEPATOCYTES TREATED WITH MITRAGYNINE (0.0025µM - 250µM) AS COMPARED TO THEIR RESPECTIVE CONTROL

In the old groups, percentage of formaldehyde formation was higher 172% in female rat as compared to male rat. Effect of mitragynine on old male rats was insignificant. 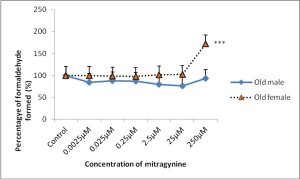 FIG. 4: PERCENTAGE OF FORMALDEHYDE FORMED IN OLD MALE AND FEMALE RAT HEPATOCYTES TREATED WITH MITRAGYNINE (0.0025µm - 250µm) AS COMPARED TO THEIR RESPECTIVE CONTROL

The factors of sex and age are significant in the metabolism of a drug. It is unwise to extrapolate from a healthy adult male to female or geriatric population. The activity of aminopyrine N-demethylase enzyme was investigated with different ages and found to decrease with age 20. Another study showed that the activity of aminopyrine N-demethylase and aniline hydroxylase enzymes decreased with age in female SD rats until 1.5 months then the activity of enzyme showed a significant increase 21. Hepatic content of male specific P450 declines with age in male rats, female isoforms remain unchanged in female and increase in male liver 22.

Specific isoenzymes involved in drug metabolism showed that their activities are different between male and female. The activity of CYP2B6, CYP2A6 and CYP3A4 showed a higher activity in women than in men whereas the activity of many other enzymes possesses a high activity in men than in women15. The expression of sex specific P450s are regulated by growth hormone, thyroid hormone, sex hormones and other chemicals 23. With an overview of the drug metabolism profile, predictions on the occurrence of herb-drug interaction, drug toxicity and adverse effects can be made and evaluated. Male have higher cytochrome P450 content than female and therefore enzymatic activity is higher 24.

Recent investigations on rat and mouse liver have identified more than 1000 genes whose expression is sex dependent. The female pattern of growth hormone gives a reduction in CYP2C11 and an increase in CYP2C12 by altering the transcription of the particular gene 12.  CYP2C11 is only expressed in male rats. In adult male rat growth hormone is secreted in a highly pulsatile manner followed by GH-free intervals lasting about 2 hours. In contrast growth hormone releases in adult female rats is characterized by more frequent and continuous presence in plasma and the difference has been noted to affect CYP3A activity and expression in these species 25, 26.

Taking a close look at the in vitro result, it is suggested that the mitragynine at lower doses may not causes induction of CYP450 system in male and female SD rats at any age which gave insignificant herb-drug interaction. It is worth noted that the mitragynine at high doses showed significant herb-drug interaction, caution should be made for any adverse effects. If mitragynine co administered with other drugs which also undergo N-demethylation (diazepam& morphine) it may cause herb-drug interaction. The enhancement of N-demethylation activity may reduce the pharmacological effect of other drugs. In addition to that the aminopyrine metabolism in control adult male is higher than control adult female which correlates the statement.

Taking into account the metabolism in old female rats, may be growth hormone is responsible for the induction of aminopyrine metabolism in female rat and increase secretion of testosterone or both may be caused to increase in male rats.

CONCLUSION: In vitro aminopyrine metabolism by aminopyrine N-demethylase is enhanced by mitragynine (25µM & 250µM) in the normal adult male, female and old female rat hepatocytes but did not alter the hepatic metabolism in normal old male rat hepatocytes. However, this is an in vitro study and therefore, extrapolation to in vivo situation require further investigation. Future studies are necessary to confirm this statement via molecular mechanism elucidation and in vivo experiments.

ACKNOWLEDGMENT: The author would like to acknowledge The University of the Punjab Lahore, Pakistan to grant scholarship to pursue PhD. study in Universiti Sains Malaysia, Penang, Malaysia.