INTRODUCTION: India is a land of rich and diverse fauna & flora. A variety of edible fruits and spices are reported as traditional medicine for the diseases management 1, 2. Traditional medicines are well known in all over the world for different remedies of common disease as they are rich in phytochemical constituents 3–5.

Spices are one of the most commonly used natural antimicrobial agents in foods and have been used traditionally for thousands of years by many cultures for preserving foods and as food additives to enhance aroma and flavor. The antimicrobial properties of some spices and their components have been documented 6- 14

Cinnamon is a spice obtained from the inner bark of several trees from the genus Cinnamomum that is used in both sweet and savoury foods. Cinnamon grows best in almost pure sand; it prefers a sheltered place, heavy moisture, and warm, unvarying temperatures. The tree usually grows up to 30 feet high, has thick outer bark, and strong branches. The top side of the leaves is shiny & emerald green in colour. The flowers are small in panicles; the fruit is an oval berry which is bluish when ripe.

The cinnamon root bark smells like cinnamon and tastes like camphor, which it yields on distillation. Cinnamon leaves, when bruised, smell spicy and have a hot taste; the berry tastes a little like juniper, and when ripe, bruised, and boiled it gives off an oily matter which cools and solidifies as “cinnamon suet. 15, 16 Cinnamon is used in traditional medicine, fights tooth decay, soothes upset stomach, Clears up urinary-tract infections, diabetes etc. The present study was undertaken in order to evaluate the in-vitro antibacterial activity of cinnamon extract.

These micro-organisms were isolated from clinical samples by using standard microbiological procedures. Identification was done morphologically and biochemically following the standard of Bergey’s Manual of Determinative Bacteriology.

The spice /parts were dried and broken into small pieces under sterile conditions, and 10 g of Cinnamomum zeylanicum was extracted with 100 ml of 70% ethanol, (Merck, Darmstadt; purity 99.5, 99.8 and 99.9%, respectively) and shaken at 160 rpm for 24 hours at ambient temperature. The mixtures were then filtered. The filtrates were evaporated and stored at 4°C for further use.  Stock solutions of crude extracts were prepared by diluting the dried extracts with DMSO solution in which extract was obtained, to obtain a final concentration of 200 mg/ml.

The bacterial strains such as E. coli, Staphylococcus aureus and fungal strain Candida albicans were isolated from clinical samples. (indentified morphologically and biochemically) used for antimicrobial assay. Bacterial strain were grown in LB medium contains in water at pH 7.2 and incubated at 37o C for overnight.

Whereas fungal strain Candida albicans were grown in PDB medium containing potato infusion and dextrose at pH 5.6 incubated at 25o C for five day. The entire microorganism subcultured in 30 days.

The antibacterial and antifungal activity studies were carried out by agar well diffusion method as given by Irobi, et al., 17. The sterile nutrient agar plates and potato dextrose agar plates were prepared. The bacterial test organisms like Staphylococcus aureus, and Escherichia coli were spread over the nutrient agar plates by using separate sterile spreader. Then the fungal test organism like Candida albicans were spread over the potato dextrose agar plates. Wells were then bored into the plates of seeded organisms using sterile cork borer of 6 mm in diameter then 50μl extracts of concentration 200mg/ml were placed on the wells in different plates with control plates with solvent. All bacterial plates were incubated at 37°C for 24 hrs and fungal plates at 25°C for five days. The diameter of the minimum zone was measured in mm.

The extracts which showed antimicrobial activity in agar well assay will be subjected to MIC assay. The antimicrobial MIC studies were carried out by broth dilution method

In the present investigation the Cinnamomum zeylanicum (Cinnamon) spice were collected from Local Gwalior market. The 70% ethanol solvent were Cinnamomum zeylanicum (Cinnamon) used for the extraction of active agents and extract investigated of the antimicrobial potential. The results of in vitro antimicrobial activity of cinnamon spice against pathogens are presented below:

The extract which showed antibacterial activity in agar well assay will be subjected to MIC assay. The antimicrobial MIC studies were carried out by broth dilution method as given by Irobi et al. 17. 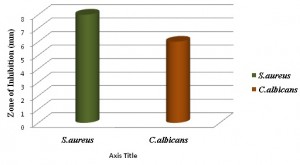 DISCUSSION:  Cinnamon bark is one of the most popular spices in use in every home. It has a delicate fragrance and a warm agreeable taste. It is extensively used as an apice or condiments in the form of small pieces or powder. It is aromatic, astringent, stimulant and carminative and also possesses the property of checking nausea and vomiting. Cinnamon is used for flavouring confectionary, liquors, pharmaceuticals, soaps and dental preparations. Powdered cinnamon is a constituent of chocolate preparations made in Spain. Cinnamon is also used in candy, gum, incense, soaps and perfumes.

Cinnamon has also been found to help diabetes in digestion of sugar. 18 Cinnamon bark contains 0.5 to 1.0% of volatile oil, 1.2% of tannins, mucilage, calcium oxalate, starch and the sweet substance known mannitol. The volatile oil is the active constituent of the drug. 19

Cinnamon extract contains cinnamaldehyde, ethyl cinnamate, eugenol, β-caryophyllene, linalool and methyl chavicol. (19-) Cinnamaldehyde exhibits its antibacterial activity due to its lipophilicity of terpenoids and pheny propanoids, which can penetrate the membrane and reach the inner part of the cell and impair bacterial enzyme system 20 which may lead to killing of microorganisms.

The present study indicates the antimicrobial activity of cinnamon against S.aureus and C. albicans. The results of this our study were in consistent with previous findings of different researchers. 21-24 who reported that cinnamon oil inhibited the growth of Staphylococcus aureus.

CONCLUSION: The ethanolic extracts of Cinnamomum zeylanicum were found to be effective antibacterial agents against human pathogens. This study gives the insight for further attention and research to identify the active compounds responsible for the plant biological activity. Further studies should be undertaken to elucidate the exact mechanism of action by which extracts exert their antimicrobial effect. So it may be helpful in new drug development.