IN VITRO EVALUATION FOR CYTOTOXIC ACTIVITY OF THREE FERULA SPECIES

IN VITRO EVALUATION FOR CYTOTOXIC ACTIVITY OF THREE FERULA SPECIES

ABSTRACT: To study the effect of herbal materials as anti-cancer agents, the first step is to evaluate their cytotoxic activity; thus in the present study, the cytotoxic activity of the extracts and fractions of Ferula szowitsiana, F. hirtella and F. oopoda in MCF-7, HT-29, A-549 and HepG-2 cells have been investigated through MTT assay. The result showed that the n-hexane and chloroform fractions of F. szowitsiana and F. hirtella were the most cytotoxic to all cell lines while F. hirtella extracts/fractions demonstrated little or no cytotoxic activity. The results suggest that the non-polar/semi polar constituents might be the cause for the cytotoxic behavior of the species.

INTRODUCTION: Nowadays, there is a growing consideration in the use of natural materials for overcoming cancer and the development of safer and more productive therapies 1; thus the trend towards natural materials for finding new promising agents is growing in toxicology laboratories where primary assays consist of in vitro evaluation of cytotoxixty to cancerous cells.

The genus Ferula (Apiaceae) has a wide distribution throughout Mediterranean and Middle East area, especially in countries such as Iran 2 where thirty perennial species of the genusgrow. They are mostly found in mountainous regions and some are distributed in desert areas 3.

These plants have proved to possess biological activity in different studies 4 and some Ferula species have demonstrated cytotoxic activity 5.

F. szowitsiana DC, F. hirtella Boiss and F. oopoda Boiss are three species with little or no history of previous cytotoxic investigations. In the present study the above Ferula species were collected from different reigns of Iran and the cytotoxicity of their total extract and the n-hexane, chloroform and methanol fraction have been evaluated against MCF-7, HepG-2, MDBK, A-549 and HT-29 cell lines.

MCF-7 and HT-29 cells were cultured in DMEM medium with 5% and 10% FBS, respectively, while the other cell lines were maintained in RPMI 1640 medium with 10% FBS to obtain the desired growth. All cell lines were treated with 1% penicillin-streptomycin, in a humidified incubator at 37°C in an atmosphere of 5% CO2.

Plant material: Whole plant of F. szowitsiana, aerial parts of F. hirtella and whole plant of F. oopoda were collected from Semnan, Tehran and Golestan province, respectively. The species were authenticated by Mr. Abdolbaset Ghorbani (botanist), Traditional Medicine and Materia Medica Research Center (TMRC), Shahid Beheshti University of Medical Sciences, Tehran, Iran. A voucher specimen of each species is deposited at TMRC herbarium for future reference. The collected parts were dried in shade and ground prior to extraction.

Extraction: 10 g of dried powder of each species was macerated with methanol 80% at room temperature for 3 days. Each day the solvent was replaced with fresh one. The combined filtrate was concentrated and further used in MTT assay.

Fractionation: 20 g of dried powder of the species was macerated with n-hexane at room temperature for 3 days. Each day the solvent was replaced with fresh one. After the third day the residue of the plant was extracted with chloroform and the same process continued for 3 days and also the same for methanol. The condensate fractions were used in MTT assay.

Preparation for MTT assay: The extracts/fractions were dissolved in DMSO (30 mg/mL). The final concentrations (300 µg/mL, 150 µg/mL, 75 µg/mL, 37.5 µg/mL, 18.75 µg/mL and 9.37 µg/mL) were provided from the above solution (DMSO 1% ). A stock solution of extracts/fractions (10 mg/mL) in DMSO was prepared whenever they did not dissolve at higher amounts and two fold concentrations were provided from the mentioned stock solution accordingly.

The cells were incubated for another 4 h in a humidified atmosphere at 37°C. At the end of the incubation period, the medium containing MTT was removed and the remaining formazan crystals were dissolved in DMSO. The absorbance was recorded at 570 nm with an ELISA reader (TECAN). Tamoxifen was used as positive control.

RESULTS: The cytotoxic activity of the three Ferula species was assessed through MTT colorimetric assay. The results are demonstrated in figures 1-3. Twelve samples (extracts and fractions) were evaluated for cytotoxic activity. The IC50 values above 300 μg/mL were considered as inactive. 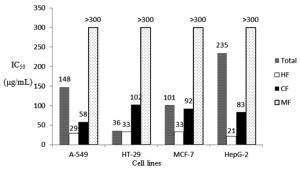 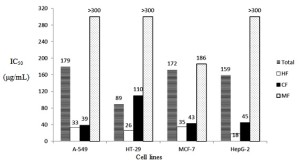 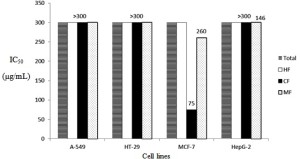 Previous studies have shown that the methanol extract of F. oopoda was cytotoxic to MCF-7 cells with the IC50 value of 45 μg/mL [9]. No cytotoxic activity for the total extract was recorded in the present study and this could be due to the more polar nature of our extract. Also F. szowitsiana methanol extract has demonstrated cytotoxic activity to MCF-7 and HepG-2 cells with the IC50 value of 29 and 40.6 μg/mL, respectively 10. This is also the same here, where our IC50 for the total extract which was obtained by methanol 80%, was higher to the both cell lines which again imply that the less polar compounds might be involved in the cytotoxic property of the species.

Phytochemical studies have resulted in isolation of cytotoxic sesquiterpenoid derivatives from the genus Ferula 4, 11, 12 and it is clear that most sesquiterpenoids could be partitioned in n-hexane and chloroform, but more phytochemical investigations and isolation of the constituents of the three species of our study, will be of great help for deeper understanding of the cytotoxic behavior in the evaluated species.

ACKNOWLEDGMENTS: The results were obtained from Pharm. D student thesis. The authors express their thanks to Mr. Hamid Moazzeni (TMRC) for her assistance in plant collection.