Nanoparticles, generally considered as particle with a size of upto 100nm, exhibit completely new or improved properties as compared to the larger particles of the bulk material that they are composed of based on specific characteristics such as size, distribution and morphology. In this study ZnO nanoparticle was synthesized by a simple and easy chemical method from ZnCl2. The synthesized nanoparticle was characterized by SEM and EDAX. Antibacterial activity of ZnO was observed against E. coli, Enterobacter sp., Bacillus subtilis, Bacillus cereus, Klebsiella pneumoniae, Staphylococcus aureus, Salmonella typhi, Vibrio cholerae by disc diffusion method. Preliminary Cytotoxicity of nanoparticle  was studied by MTT assay against vero cell line. ZnO nanoparticle had shown antibacterial activity against all the tested bacteria and maximum activity was observed against salmonella typhi. ZnO nanoparticles has shown less cytotoxicity effect on vero cell than ZnCl2.

INTRODUCTION: Nanotechnology deals with the nanomaterial and nanoparticle which are in the size of about 100nm. Nanoparticle has wide application in various fields like chemical industry electronics, biomedicine, cosmetics, etc. 1, 2, due to its novel properties. Novel property is due to the alteration in their physical, chemical, electrical and magnetic property 3. When reduced to nanosize, unique size-dependent properties of nanoparticles are manifested 4. The reason believed to cause this property change from their bulk is increase in relative surface area, a greater percentage of atoms at the material’s surface, quantum effects which can affect chemical reactivity, and other physical and chemical property 4, 5. Many nanoparticles have been synthesized and used in various field due to this altered properties. The metal nanoparticles are most widely used in the field of medicine.

ZnO is a conventional wide band-gap semiconductor 6, 7 that has been highly explored in multiple areas of science. ZnO nanomaterials have been used as semiconductor in microelectronic device and for accelerating degradation of water pollutants via photocalalytic activity.

ZnO nanoparticles were synthesized by various methods like spray pyrolysis, thermal decomposition, molecular beam epitaxy, chemical vapor deposition, laser ablation etc. Chemical synthesis is one of the important techniques. It can be performed using a range of precursors and synthesis conditions like temperature, time, concentration of reactants etc. Variation of these parameters leads to different size selection and geometries of resulting particles 20. ZnO nanoparticle synthesized using capping agents like thioglycerol have been reported by Shriwas 20.

In this study, a simple and easy method to synthesis ZnO nanoparticle from ZnCl2 without any capping agent was employed and the synthesized nanoparticle was focused for its application in field of biomedicine by evaluating its antibacterial and cytotoxic effect.

After incubation media containing nanoparticle was removed.  MTT reagent 20 µL was added to each well containing media and incubated for 3.5 hr at 37°C under an atmosphere of 5% CO2 until a purple precipitate was visible. Media was removed carefully (Do not disturb cells and do not rinse with PBS). 150μl DMSO (MTT solvent) was added to dissolve the purple precipitate.  Absorbance was read at 570 nm with a reference filter of 630 nm. 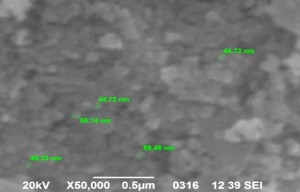 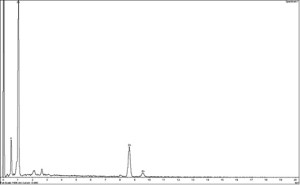 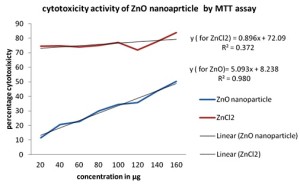 The ZnO has shown less toxicity of 11.68% at 20µg but ZnCl2 at same concentration has shown toxicity of 74.53%. IC 50 value for the ZnO was found to be 159µg. The ZnCl2 has shown more toxic at the tested minimum quantity than ZnO. So, ZnO can be used for in vivo studies like drug carrier and also in wound healing studies.

CONCLUSION: In this study, a simple and rapid method was employed for the synthesizing of ZnO nanoparticle from 0.5M ZnCl2. Nanoparticle were subjected to SEM and EDAX analysis to confirm the nanosize and element composition. The SEM and EDAX analysis revealed the particles are Zn and size of particles were in the range of 40-60nm. Synthesized nanoparticles were subjected to antibacterial assay by disc diffusion method against the following bacteria E. coli, Enterobacter sp., Bacillus subtilis, Bacillus cereus, Klebsiella pneumoniae, Staphylococcus aureus, Salmonella typhi and Vibrio cholereae.

Antibacterial activity was observed against the tested microorganism and maximum activity was observed against salmonella typhi. The cytotoxicity study by MTT assay revealed that the particle was very less toxic to normal cell than the ZnCl2. This preliminary cytotoxicity study of ZnO nanoparticle might contribute to the comprehensive of this compound in vivo study like in drug delivery system.