ABSTRACT: Ballota nigra (Lamiaceae) has been widely used as traditional medicine in many countries for the treatment of neuro-sedative, antidepressant, antioxidant, antibacterial, insecticidal, anticholinesterase and antifeedant effects. The main objective of this study is to evaluate the antibacterial activity of leaf extracts of Ballota nigra Linn. against five bacterial pathogens. The leaves were extracted in five different organic solvents and their potential were tested against three Gram negative bacteria (Escherichia coli, Salmonella typhi and Salmonella paratyphi) and two Gram-positive bacteria (Micrococcus luteus and Bacillus subtilis) using Agar well diffusion method. The results indicate that most of the extracts showed prominent activity against all the bacterial strains. The methanol extract was most effective with zone of inhibition ranging from 12.20 ± 0.19 to 22.20 ± 0.19 mm for all the tested strains, while chloroform and ethyl acetate shows moderate activity. It clearly depicts that the methanol extract exhibit significant antibacterial activity due to the presence of phyto-constituents. This work can be further explored to in vitro studies for isolation and identifying the potential applications in pharmaceutical industries.

INTRODUCTION: Herbal plants play a major role in traditional medicine, were millions of people in the world rely on them 1. In last decade, there has been significant increase in the study of medicinal plants for utilization 2. World Health Organization (WHO) reports that 80% of the world population depend on the natural products for health care needs 3.

This is mainly due to belief on the herbal medicine that has less side effects and safe remedy to treat human aliments when compared with synthetic drugs 4.

In recent times, multiple drug resistance has been increased due to arbitrary use of commercial antimicrobial drugs 5. Emergence of multiple drug resistance pathogens against antibiotics and synthetic drugs have urged the researchers to discover novel compounds of plant origin which are capable to inhibit infectious diseases caused by the microorganisms 6. Isolation of phyto compounds from the medicinal plants has privileged activity towards infectious diseases.

However, the crude extracts from herbs are more active against the pathogens than isolated compounds due to its synergistic effects 7. The therapeutic potential of the plants mainly rely on the secondary metabolites namely alkaloids, steroids, tannins, flavonoids, steroids and phenol compounds which may exert potential antibacterial activity towards infectious diseases 8.

India has immense repository for the medicinal herbs that are used as traditional medicine. In India, this is the first attempt to study antibacterial activity of the medicinal plant of Ballota nigra Linn. (Lamiaceae) usually seen in Europe, Middle East and North Africa. Crude extracts of leaf of Ballota nigra was evaluated for its antibacterial potential. Different parts of the plant such as stem, leaves and roots have medicinal values. It has been extensively used as traditional medicine in many countries for the treatment of neuro-sedative, antidepressant, antioxidant, antibacterial, insect-cidal, anti-cholinesterase and antifeedant effects 9. Phytochemical constituents isolated from various parts of the plant are known to possess pharmacological activity against various diseases.

Authentication of the Plant Materials: The fresh leaves of the plant Ballota nigra Linn.  were collected in the month of May in 2014 from Guindy area, Chennai district, Tamil Nadu. The plant were identified botanically by Dr. D. Narasimhan PhD. in Botany. Medicinal plants, Associate professor, Department of Botany, Madras Christian College (Autonomous), Tambaram. Then, the plants have to be processed for cleaning in order to prevent the deterioration of phytochemicals present in plants.

Preparation of Plant Material: About 3 kg of the fresh and tender leaves were collected and washed under running tap water. Then the leaves were shade dried for 15 days. The dried plant material was coarse powdered using an electric blender and further subjected to extraction using different solvents.

Preparation of Crude Extraction: About, 100g of powdered leaves was subjected to successive soxhlet extraction with five different organic solvents with increasing polarity. Further, the extracts were concentrated at under reduced pressure using rotary evaporator. Then the extracts were stored in air tight bottles for further studies.

Preparation of Bacterial suspensions: The Bacterial strains used for this study was inoculated into the nutrient broth and incubated at 37 °C overnight and standardized to 0.5 McFarland (1.5×108 CFU/mL) 10.

Antibiotic and Control: Imipenem (N-formimidoyl thienamycin) is used as a Standard antibiotic for positive control and Dimethyl sulfoxide oxide (DMSO) used as negative control because it does not affect bacterial growth. This can be prepared by dissolving 100% dimethyl-sulphoxide (DMSO) at the concentration of 2.5 mg/mL.

Determination of Antibacterial Activity: Antibacterial activity of Hexane, Chloroform, Ethyl acetate, Methanol and Aqueous extracts of leaf of Ballota nigra was studied using Agar well diffusion method 11. The Bacterial suspensions was taken using sterile wire loop and swabbed on Muller Hinton agar [MHA-Hi media M1084] plates in three axes and around the agar margins to ensure even distribution of the suspensions and allowed to dry for 15 minutes. Then the well of 6mm diameter was punched on the seeded agar plates with a sterile cork borer. In each plate, varying concentrations of the leaf extracts (25, 50, 100μl) were poured and kept 1 hour for perfusion. All the seeded plates were incubated at 37 °C for 24 hours. For the positive control, Standard antibiotic (Imipenem) Disc was placed in the MHA plates and DMSO is used as negative control. After 24 hrs incubation, the antibacterial spectrum of the each extracts was examined in terms of zone of inhibition (in millimetres) and measured using transparent ruler. The entire test was done in triplicates to minimize the error 12.

Data Analysis: All the assays were performed in triplicates and results were expressed as means ± S.E. (Standard Error).

Antibacterial activity of methanol extract exhibits synergistic action against the Gram positive bacteria when compared to gram negative bacteria. Bacillus subtilis and Micrococcus luteus of methanolic extract showed maximum inhibitory effect with a zone of inhibition of 22.20±0.19 mm and 20.33±0.41 mm while the E. coli, S. typhi and S. paratyphi showed minimum inhibitory activity with a zone of inhibition of 17.80±0.72 mm, 15.73±0.46 mm and 20.20±0.19mm respectively in the (Fig. 1). The results revealed that the methanolic extract contain the following phyto-constituents Tannins, Flavanoids, saponins, Terpenoids and triterpenoids exhibited antibacterial properties.

This may be due to the difference in solvents used for the extraction and based upon solubility of the phyto-constituents in the solvents. Graph of varying concentrations of the leaf extracts 25, 50 and 100μl are shown in the (Fig. 2). This study revealed that the gram positive bacteria are more susceptible than the gram negative bacteria. It may be due to difference in their cell wall structure where as the outer membrane present in the gram negative may act as barrier for Phytochemicals and antibiotics 13. The standard drug imipenem (20μg/disc) showed high degree of inhibition against all the test bacteria. Among all solvent extracts tested, the methanol extract was found to have higher antibacterial activity due to the presence of Tannins, Flavanoids, saponin, Terpenoids and triterpenoids. These phyto-constituents exhibit antibacterial activity through different mechanisms.

The cell wall synthesis formed irreversible complexes of proline rich protein was arrested by Tannins. Flavanoids are most effective phytochemical against wide range of microorganisms and they have ability to complex with bacterial cell wall and extracellular proteins 13. Terpenoids have the capability to weaken the membrane tissue of the microorganism by dissolution of the cell wall 14. 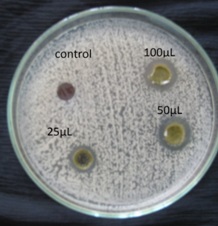 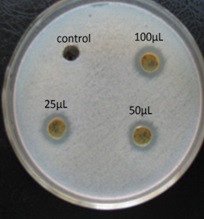 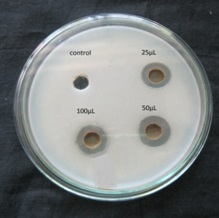 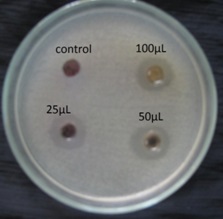 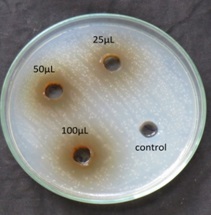 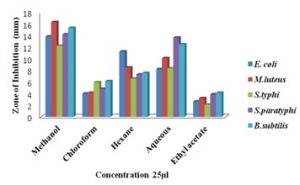 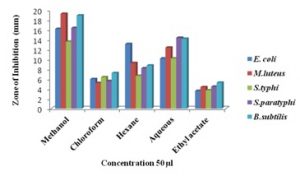 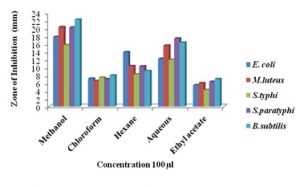 CONCLUSION: Thus the current work clearly depicts the need for folk medicines to treat infectious diseases caused by pathogens. There has been tremendous increase in the drug resistance mechanism of various pathogenic bacteria and hence this has paved the way for discovery of new compounds from the medicinal plants other than the synthetic drugs. The present investigation suggest that methanolic leaf extract of Ballota nigra exhibit significant antibacterial activity and this result confirms that further research is needed to isolate the active phyto-compounds and pharmacological evaluation.

ACKNOWLEDGEMENT: We acknowledge Institute of Science, Technology and Advanced Studies (VISTAS) for constant encouragement, support to perform this research.

CONFLICT OF INTEREST: The author declares no conflict of interest relevant to this article.