IN VITRO EVALUATION OF ANTIBACTERIAL AND ANTIFUNGAL PROPERTIRS OF TERMINALIA BELERICA

IN VITRO EVALUATION OF ANTIBACTERIAL AND ANTIFUNGAL PROPERTIRS OF TERMINALIA BELERICA

The research work was conducted with the fruits of Terminalia belerica (Fam: Combretaceae) to investigate antibacterial & antifungal activities. The fruits of the plant were successively extracted by cold extraction process by using two solvents namely ethanol and acetone. Antimicrobial activities of the extracts of both solvents were investigated by a simple agar diffusion method using ten pathogenic bacteria. The extracts of ethanol showed moderate activity against all tested pathogenic bacteria except Bacillus subtilis. Again acetone extracts showed moderate activity against Vibrio cholerae, Staphylococcus aureus, Bacillus subtilis, Shigella dysenteriae and Escherichia coli.  All the activities were determined by measuring the zone of inhibition compared with the standard antibiotic (Amoxicillin). Antifungal screening was done for the ethanol and acetone extracts by disk diffusion method with ten pathogenic fungi. Both the extracts showed moderate activity against Colletotrichum corcori, Fusarium equiseti and Candida albicans. In this case, Griseofulvin was used as standard antibiotic

INTRODUCTION: Terminalia belerica  is a perennial herb mainly distributed in the tropical regions and commonly found in South-East Asia, including Thailand. It is one of the ingredients of “tripala”, an Ayurvedic formulation that is believed to promote health, immunity and longevity 1. This formulation, rich in antioxidants, is frequently used in Ayurvedic medicine to treat many diseases such as anemia, jaundice, constipation, asthma, fever and chronic ulcers 2.

The fruit of T. belerica has been used to treat various ailments in the folklore medicine 3. Antibacterial 4, antidiabetic, andantioxidant 5 activities of crude extracts of T. belerica have been reported. The fruit is also reportedto have purgative 6, cardiac depressant, hypotensive and chleretic effects 7.

Identification and Collection: Using standard taxonomical methods, supplied by the Bangladesh Forest Research Institute (BFRI), Chittagong, identified the plant’s fruits. The fruits of the plant Terminalia belerica  were collected from Baluchora, Chittagong on August 2011 and was identified by a Taxonomist of Bangladesh National Herbarium (BNH). They were then separated & cleaned from impurities. The fruits of the plant were air dried properly for 7 days.

After complete drying, the fruit samples were ground into coarse powder with the help of a mechanical grinder and the powder was stored in a suitable container for extraction process.

Preparation of the Plant Extract: The powdered material was successively extracted with ethanol and acetone by using cold extraction process 9. At first 250 gm of dried powder was taken in an aspirator (5L). Before placing powders into the aspirator, the jar was washed properly and dried. Then 750 ml of solvent ethanol was added gradually. The time duration was of 21 days at room temperature with occasional shaking and stirring for each successive extraction. It was then filtered through a fresh cotton plug and finally with a Whatmann filter paper no. 1. In the same way the powdered material was extracted with acetone. Finaly this two extracts were concentrated by rotary evaporator in dry & clean air.

Nutrient agar medium (23 gm) was suspended in 1000 ml of water and heated to make a clear solution. Then from this clear solution concentrated agar plates were prepared. The standard discs 0.1mg Amoxicillin/disc and 0.1mg Grisofulvin/disc were used to compare the both activities of test samples. For extracts 0.5mg/disc samples were used. The sample discs, the standard antibiotic discs and the control discs were placed gently on the previously marked zones in the agar plates, pre-inoculated with test organism. The discs were then incubated on the plate aerobically at 37ºC for 24 hours. The diameter of inhibition zone around each disc was measured and recorded at the end of the incubation period.

The extract concentration able to inhibit microbial growth, which was observed through the formation of an inhibition growth zone around the disc (equal to or greater than 8 mm) 13 was considered.

TABLE 1: IN VITRO ANTIBACTERIAL ACTIVITY OF THE ETHANOL & ACETONE EXTRACTS OF FRUITS OF TERMINALIA BELERICA

FIGURE 1: ZONE OF INHIBITION OF THE ETHANOL & ACETONE EXTRACTS OF FRUITS OF TERMINALIA BELERICA

From table 2, it is found that both extracts showed antifungal activity only against Colletotrichum corcori, Fusarium equiseti and Candida albicans. On the other hand, the standard sample (Grisofulvin) exhibited activity against all fungi tested except Alternaria alternate, Curvularia lunata and Colletotrichum gleosparoitis.  The zone of inhibition found in different organisms can be shown in the following figure 2, in mm. 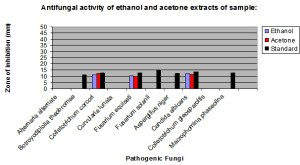 FIGURE 2: ZONE OF INHIBITION OF THE ETHANOL & ACETONE EXTRACTS OF  FRUITS  OF  EMBLICA OFFICINALIS

In both of the cases, the standard drug samples were Amoxicillin and Grisofulvin respectively. From thorough study of this experiment it may be concluded that, the extracts of two different solvents of fruits of T. belerica has narrow spectrum antibacterial and antifungal property against some pathogenic organism strains in this research work. As evident from the above discussion, fruits of T. belerica may contain important chemical substances that confer upon this plant as medicinal agent possessing. Antibacterial and antifungal activity. As apparent from our results and from other worker’s reports, local uses of the fruits of this plant in various diseases are not at much variance with its antimicrobial property.

This fact also indicates that the traditional uses of this plant’s fruits are not scientifically baseless and therefore, the other plant parts and obviously fruits of T. belerica should be thoroughly investigated phytochemically to fully exploit its medicinal and pharmaceutical potentialities.