IN VITRO EVALUATION OF ANTIBACTERIAL POTENTIAL OF ANNONA SQUAMOSA L. AGAINST PATHOGENIC BACTERIA

INTRODUCTION:In India, from ancient times, different parts of medicinal plants have been used to cure specific ailments. Today, there is widespread interest in drugs derived from plants. This interest primarily stems from the belief that green medicine is safe and dependable, compared with costly synthetic drugs that have adverse effects. Hence, there is need to screen medicinal plants for promising biological activity. Plants of the genus Annona, members of the Annonaceae family, are native to South and Central America. They are mostly small trees, and produce compound fruits.

Annona squamosa L., known as custard apple, is commonly found in deciduous forests, also cultivated in various parts of India. Literatures of many research works prove that every parts of A. squamosa possess medicinal property 1. Roots are employed internally in depression of spirits and spinal diseases. Bark is known to be a powerful astringent.

In Ayurveda, fruits are considered as a good tonic, enrich blood, used as expectorant, increases muscular strength, cooling, lessens burning sensation and tendency to biliousness, sedative to heart and relieves vomiting 2. Due to uniqueness of fruit property in curing of different ailments, this part was selected for the study. Staphylococcus aureus is a Gram-positive extracellular bacteriumthat is the most common cause of skin and soft tissue infections,such as cellulitis, impetigo, and folliculitis 3.

E. coli can cause gastroenteritis, urinary tract infections, and neonatal meningitis. In some cases, virulent strains are also responsible for haemolytic-uremic syndrome, peritonitis, mastitis, septicaemia and  pneumonia 6. Pseudomonas aeruginosa is an opportunistic pathogen that causes urinary tract infections, respiratory system infections, dermatitis, soft tissue infections, bacteremia and a variety of systemicinfections, particularly in victims of severe burns, and in cancer and AIDS patients who are immunosuppressed. Pseudomonas aeruginosa is occasionally a pathogen of plants, as well 6.

With this in mind, the present work was planned with an attempt to perform the studies on antibacterial activity of the seed extract of Annona squamosa.

Preparation of extracts: Half Kg. of each powdered plant material was taken in six separate conical flasks and soaked with 2 litters of each solvent (petroleum ether, methanol and chloroform) at room temperature for 48 hours. The extracts were filtered through Buchner funnel using Whatman filter paper No. 1. The filtrates were evaporated to dryness under reduced pressure and the concentrated extracts were freeze dried to remove the solvent at -2oC till further use.

Preparation of Test Organisms: An inoculums of size 108 colony forming units per milliliter (cfu/ml) of each of the isolates was prepared according to the method described by Bauer et al., 7. This was effected by suspending loopful of inoculums from the stock into different labeled test tubes, each containing 10 ml of nutrient broth. A total of 3 test tubes were used for each test organism. The treated tubes were incubated at 37oC for 24 hrs. The resultant cultures were then diluted with fresh nutrient broth in order to achieve optical densities corresponding to 108 cfu/ml.

Agar Cup Method: The agar cup method was used to study the antibacterial activity of the extracts as described by Panda et al., 8. Mueller-Hinton agar (MHA) (Hi-Media, India) was used as bacteriological medium. MHA plates were prepared by pouring molten media into sterile Petri plates. The plates were allowed to solidify for 5 min. Wells were prepared in seeded agar plates. 0.1% inoculums suspension was swabbed uniformly and the inoculums were allowed to dry for 5 min. The extracts were diluted in 100% DMSO 9.

A total of 6 mm diameter wells were punched into the agar and filled with the 50 μl (20 mg/ml in DMSO) extracts, 20 μl DMSO (negative control) and 5 μl of standard antibiotic (Penicillin and Streptomycin at concentration 10 μg/ml) were used as a positive control. The plates were incubated at 37 ºC for 24 hours. After the incubation period formation of zones around the wells, confirms the antibacterial activity of the respective extracts. The same procedure was followed for each strain and extract. Each experiment was carried out in triplicates. The mean ± SD of the inhibition zone was taken for evaluating the antibacterial activity of the extracts.

RESULT AND DISCUSSION: Annona squamosa have the great medicinal value. The tested bacterial strains showed different pattern of inhibition and standard  deviation of average of three  readings  were recorded in tabular form (Table 1). The Petroleum ether extracts  of Annona  squamosa  showed highest  antimicrobial  activity  against  Staphylococcus aureus  with zone of  inhibition 12 mm while it was lowest against  Pseudomonas aeruginosa with zone of inhibition 7.8  mm.

All values are mean zone of inhibition (mm) +  S.D. of  three replicates.

Antibiotic streptomycin showed antimicrobial activity  against  all 5 organisms  while penicillin showed antimicrobial activity  against  E-coli, Staphylococcus  and Bacillus spp. Thus chloroform extracts of Annona squamosa  showed maximum zone of inhibition against E. coli in comparison with other bacterial species (Graph 1). Extracts of Annona squamosa inhibited the growth of all test strains because of the presence of phytochemicals such as alkaloids, flavonoids, carbohydrates, glycosides, tannin and phenolic compounds, steroids and sterols and triterpenoids. The phytochemical constitute such as alkaloids, flavonoids, tannin and phenols compound have been reported to be important compounds in many other medicinal plants 10. 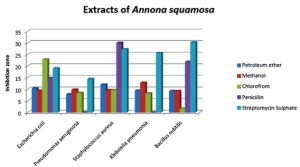 There are several reasons that people use plants for medication. This includes improvement of health after herbal treatment, low cost of the drugs,non availability of synthetic drugs particularly in the rural areas, where available were either fake or expired drugs and in some cases the people are more accustomed to and comfortable with traditional healing 11. From agar cup method, results obtained that there were marked differences between the activities of the plant extract and those of the pure antibacterial drugs (penicillin and streptomycin). Such significant differences are normally present when crude (unpurified) plant extracts are compared with pure drugs that are already in clinical use.

The result of the antibacterial activity of Annona squamosa seed extracts is particularly important considering the test human pathogenic bacteria.