INTRODUCTION: Antioxidant compounds in food play an important role as a health protecting factor. Scientific evidence suggests that antioxidants reduce risk for chronic disease. The main ability of an antioxidant compound is its ability to trap free radicals. Highly reactive free radicals and oxygen species are present in biological systems from a variety of sources; these free radicals may oxidize nucleic acids, proteins, lipids, or DNA and can initiate degenerative disease. Antioxidant compounds scavenge free radicals such as peroxide, hydroperoxide or lipid peroxyl and thus inhibit the oxidative mechanism that lead to degenerative disease. These are vital substances which posseses the ability to protect the body from damage caused by free radical induced oxidative stress 1. Antioxidants are radical scavengers which protect the human body against free radical that may cause pathological conditions such as ischemia, anemia, asthma, arthritis, inflammation, neuro-degenertion, parkinson’s disease, mongolism, ageing process and perhaps dementias 2.

Oxidation is essential to many living organism for the production of energy to fuel biological processes. However oxygen centered free radicals and other reactive oxygen species (ROS), which are continuously, produced in vivo, result in cell death and tissue damage. The role of oxygen radical has been implicated in several diseases, including cancer, diabetes and cardiovascular diseases, ageing etc 3. There is an increasing interest in natural anti-oxidants, eg., polyphenols, present in medicinal plants and dietary plants, which might help prevent oxidative damage 4. In biological systems, lipid oxidation can produce toxic compounds and initiate other harmful reactions. Phenolic compounds can act as antioxidants by many potential pathways such as free radical scavenging 5.

The plant Tylophora indica (Burm. f.) Merr. is also known as “Antmul” is an perennial branching climber with long fleshy roots. It grows widely in plain and hilly places of India up to an altitude of 1,000 m in Bengal, Assam, Cachar, Orissa, and southern India 6. The whole plant is of a pale yellow in colour and has no marked odour but has sweetish and acrid taste 7. Traditionally plant is used in treatment of bronchial asthma; however alcoholic extract and total alkaloids produced CNS depression, myocardial depression, fall of blood pressure, non specific relaxation of smooth muscles and antagonized contractile effects of histamine and acetylcholine.

Collection and authentication of plant: Fresh leaves of Tylophora indica were collected in the month of August-September (2009) from Herbal Garden of Jamia Hamdard University, New Delhi. The plant sample was identified and authenticated at Raw material, Herbarium and museum NISCAIR, CSIR, New Delhi, India. The sample was also submitted to museum for future reference (Ref: NISCAIR/RHMD/consult/-2009-10/1361/163).

Preparation of Methanolic Extract: The collected leaves were air-dried, pulverized in to a coarse powder by grinder and sieved. The dried powdered material was extracted with methanol in round bottom flask with soxhlet apparatus connected to it for 1 hour. The extract was filtered and the solvent was removed by distillation under vacuum, extract is subjected to evaporate to dryness in china dish. After dryness, by adding corresponding solvent to it, it is used for further in-vitro studies.

DPPH Free Radical Scavenging Assay: The free radical scavenging activity of the fractions was measured in vitro by 1, 1- diphenyl- 2-picrylhydrazyl (DPPH) assay. About 0.3mM solution of DPPH in 100% methanol was prepared and 1ml of this solution was added to 3ml of the fraction dissolved in methanol at different concentrations. The mixture was shaken and allowed to was measured at 517nm using a shimadzu spectrometer. The percentage scavenging inhibition was determined and was compared with that of ascorbic acid (AA), which was used as the standard 64.

Preparation of extract: 10g of the dried powdered leaves from plants Tylophora indica were taken separately in a paper cone and placed into soxhlet apparatus. 100ml of methanol a polar solvent was taken in the round bottom flak attached to the soxhlet apparatus. A condenser was attached to this set up. The temperature was set in the range of 25o- 30oC. Methanol gets vaporised and rises up to the condenser where it condenser where it condenses back into liquid. This liquid falls back into the round bottom flask. This process was continued till all the compounds that can be extracted from the plant by methanol gets extracted and finally only clear liquid of methanol falling into the round bottom flask. The extract got from the above process was evaporated over night stored in screw cap vials.

The mixture was shaken vigorously and incubated for 30min in room temperature. Absorbance of the resulting was measured at 517nm UV-Visible spectrophotometer. Blank was prepared without the addition of DPPH. Absorbance of plant extract is compared with standard solution concentrations which is ascorbic acid.

TABLE 1: ABSORBANCE OF CATECHIN AT 765NM

TABLE 2: ABSORBANCE OF SAMPLE AT 765NM 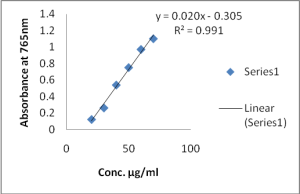 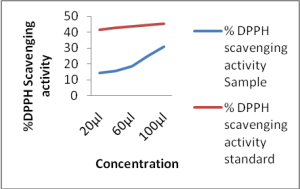 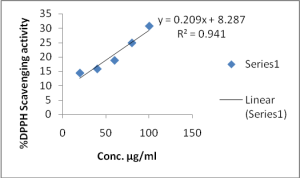 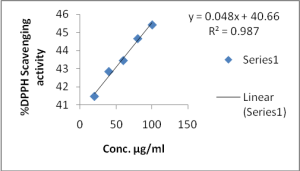