IN- VITRO EVALUATION OF ANTIOXIDANT ACTIVITY OF CURCUMA CAESIA ROXB.

IN- VITRO EVALUATION OF ANTIOXIDANT ACTIVITY OF CURCUMA  CAESIA ROXB.

INTRODUCTION: The genus CURCUMA is a well known spice of India. It is also called haldi and more than 200 species and subspecies of it is found all across the world. One of which is Curcuma caesia Family: Zingiberaceae. It is also known as “Kali Haldi”. It is an erect rhizomatous herb with large leaves. Fresh rhizomes are aromatic with intense camphoraceous odor and are applied externally to sprain and bruises 1. Almost all species of Curcuma contains antioxidant activity and the pharmacological effects and prospects for future clinical use had been tried so far 2. Antioxidants or inhibitors of oxidation are the compounds which retard or prevent the oxidation in general and prolong the life of oxidizable matter 3.

Antioxidants can interfere with the oxidation process by reacting with free radicals, chelating catalytic metals and also by acting as reactive species scavenger. The antioxidants activities of the individual compounds may depends on structural factors, such as number of phenolic, hydroxyl or methoxyl groups and other structural features 4. Among the antioxidative compounds vitamin C, E, A, Selenium, Carotenoids, Ascorbic acid shows very strong intensity of antioxidative activities 5. Antioxidant determinations by the use of stable free radical were earliest being done in 1958 by Blois 6.

A free radical is a compound with one or more unpaired electrons in its outer orbital 7. Such unpaired electrons make these species very unstable and therefore quite reactive with other molecules due to the presence of unpaired electrons and try to pair their electrons and generate a more stable compound 8. The molecule of 1, 1-diphenyl-2-picryl-hydrazyl (DPPH) is characterized as a stable free radical by virtue of the delocalization of the spare electron over the molecule as a whole, so that molecules do not dimerise, as would be the case with most other free radicals. The delocalisation also gives rise to the deep violet colour, characterised by an absorption band in ethanol solution centred at about 517 nm. When a solution of DPPH is mixed with that of a substance that can donate a hydrogen atom, then this gives rise to the reduced form  with the loss of this violet colour (although there would be expected to be a residual pale yellow colour from the picryl group still present). Representing the DPPH radical by Z* and the donor molecule by AH, the primary reaction is;

Where, ZH is the reduced form and A* is free radical produced in this first step. This latter radical will then undergo further reactions which control the overall stoichiometry, that is, the number of molecules of DPPH reduced (decolorized) by one molecule of the reductant. The reaction [1] is therefore intended to provide the link with the reactions taking place in an oxidising system, such as the autoxidation of a lipid or other unsaturated substance; the DPPH molecule Z* is thus intended to represent the free radicals formed in the system whose activity is to suppressed by the substance AH 9.

Objective: The objective of this study was to investigate the antioxidant activity of methanolic extract of Rhizomes of Curcuma caesia and calculate its IC50. The comparison of IC 50 of Curcuma caesia with IC50 of Butylated Hydroxytoluene (Standard Antioxidant).

Collection of Plant Material: The rhizomes of Curcuma caesia were collected on 1st November from Jabalpur under the guidance of Dr. JL Shrivastava, Biodiversity Scientist in Biodiversity Branch at State Forest Research Institute, Jabalpur (MP).

Preparation of Extract: The rhizomes were cut into pieces and air dried at room temperature. The dried rhizomes were coarsely powdered and successfully extracted with methanol using Soxhlet extractor at a temperature of 55-60 0C for a period of 7-8 hrs 11. The crude extract obtained was further dried over water bath.

Also the Control Absorbance (of DPPH) was taken by replacing 0.5 ml of prepared dilutions with methanol. The absorbance of all the furthermade dilutions made in 5 ml volumetric flasks  were taken after 30 minutes at λ max 517 nm using methanol as blank. The percentage inhibition was calculated using:

RESULT: In the present study it has been showed that Curcuma caesia had moderate antioxidant activity as compared to that of standard Butylated Hydroxytoluene. The Ac, Absorbance of Control was found to have absorbance 2.346 at 517 nm. The As, Absorbance of Sample (Curcuma extract and Standard Butylated Hydroxytoluene) were taken in triplicate. With the increase of concentration, the decrease of absorbance value and the calculated % Inhibition has shown with the help of tables.

TABLE 1: VALUES OF ABSORBANCE AND % INHIBITION WITH INCREASE IN CONCENTRATION OF METHANOLIC  EXTRACT OF RHIZOME OF CURCUMA CAESIA 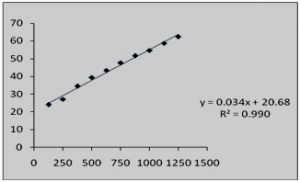 FIG. 1: GRAPH BETWEEN CONCENTRATION (µgm) VS % INHIBITION OF METHANOLIC EXTRACT OF RHIZOME OF CURCUMA CAESIA

TABLE 2: VALUES OF ABSORBANCE AND % INHIBITION WITH INCREASE IN CONCENTRATION OF METHANOLIC SOLUTION OF BUTYLATED HYDROXYTOLUENE (STANDARD ANTIOXIDANT) 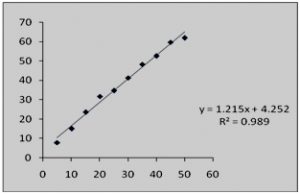 From the above graph plot equations it has been calculated that: