Reactive oxygen species (ROS) are thought to underline the process of ageing and the pathogenicity of various diseases, such as neurodegenerative disorders and cancer. The use of traditional medicine is widespread and plants still present a large source of natural antioxidants that might serve as leads for the development of novel drugs. In this study, an ethanolic extract of leaves from Dillenia indica L. which belongs to family “Dilleniaceae”, was tested for in vitro antioxidant activity. Free radical scavenging assays, such as hydroxyl radical, hydrogen peroxide, 2, 2-diphenyl-1-picryl hydrazyl (DPPH), and reducing power assay were studied. The extract effectively scavenged hydroxyl, hydrogen peroxide radicals. It also scavenged DPPH radicals. Furthermore, it was found to have reducing power. All concentrations of leaf extract exhibited free radical scavenging and antioxidant power, and the preventive effects were in a dose-dependent manner. The results obtained in the present study indicate that the ethanolic extract of Dillenia indica L. could be considered a potential source of natural antioxidant.

INTRODUCTION: Free radicals contain one or more unpaired electrons, produced in normal or pathological cell metabolism. Reactive oxygen species (ROS) react easily with these free radicals to become radicals themselves. ROS are various forms of activated oxygen, which include free radicals such as superoxide anion radicals (O2−) and hydroxyl radicals (OH•), as well as non-free radical species (H2O2) and the singled oxygen (O2) 1. In vivo, some of these ROS play an important role in cell metabolism including energy production, phagocytosis and intercellular signaling 2.

However, these ROS produced by sunlight, ultraviolet light, ionizing radiation, chemical reactions and metabolic processes have a wide variety of pathological effects such as DNA damage, carcinogenesis and various degenerative disorders such as cardiovascular diseases, aging and neuro-degenerative diseases 3, 4, 5. Recent investigations have  shown that the antioxidants with free-radical scavenging properties of plant origins could have great importance as therapeutic agents in aging process and free radical mediated diseases including neuro degeneration 6, 7 . The use of antioxidants that scavenge ROS has been studied by evaluating its potential and therapeutic applications.

The most commonly used antioxidants since the starting of this century are butylated hydroxyanisole (BHA), butylated hydroxytoluene (BHT), propyl gallate (PG), and tert-butylhydroquinone (TBHQ) 8. However, they are suspected of being responsible for liver damage and carcinogenesis in laboratory animals. Naturally occurring substances in higher plants have antioxidant activity that has long been recognized. Thus, the interest in natural antioxidants has increased considerably.

Dillenia indica L. is common evergreen tree that grows widely in tropical forests belongs to family Dilleniaceae. The plant is locally known as Karambel or Karmel in Marathi, Chalta in Hindi and Ramphal in Nepali 9, 10. The leaves bark and fruit of the plant are used in the indigenous system of medicine. It relieves abdominal pain and regulates the heat in the body. It is reputed as a cooling beverage in fever, expectorant in cough mixture, tonic, laxative and astringent 11.

The present investigation focused to evaluate the in vitro antioxidant potential of ethanolic extract of leaves of Dillenia indica L. in different screening methods.

Plant Materials: Dillenia indica L. leaves were collected in September 2010 from Veermata Jijabai Bhosle Udyan, Byculla, Mumbai, India. Dillenia indica. (L.) Linnus (Dilleniaceae) as authenticated by Dr. Ganesh Iyer, Reader, Dept. of Life Sciences, Ruia College, Mumbai. The leaves with stalks were dried under shade; leaves were separated from branches, then were pulverized by a mechanical grinder, passed through a 40-mesh sieve, and stored in a well closed container for future use.

Extraction procedure: The dried and pulverized leaf of about 100 g was extracted with70% ethanol (60–800C) in a Soxhlet apparatus. The solvent was removed from ethanol extract under vacuum rotary dryer and a semi solid mass (17% w/w in respect of dry material) was obtained. The ethanolic extract of Dillenia indica L. was stored in desiccators. The dried extract thus obtained was used for the assessment of antioxidant activity through various in vitro assays.

Determination of DPPH Radical Scavenging Activity: The free radical scavenging activity of the extracts was measured in terms of hydrogen donating or radical-scavenging ability using the stable radical DPPH (2,2-diphenyl-1-picrylhydrazyl) 12. 0.1 mM solution of DPPH in ethanol was prepared and 1.0 ml of this solution was added to 3.0 ml of extract solution in water at different concentrations (10-100 μg/ml). Thirty minutes later, the absorbance was measured at 517 nm. Ascorbic acid was used as standard. Lower absorbance of the reaction mixture indicates higher free radical scavenging activity. The capability to scavenge the DPPH radical was calculated using the following equation:

The antioxidant activity of the extracts was expressed as IC50. The IC50 value was defined as the concentration in μg/ml of extracts that inhibits the formation of DPPH radicals by 50%

Determination of Reducing Power: The reducing power of the extracts was determined with using potassium ferricyanide 13. Various concentrations of the extracts (30-1000 μg/ml) in 1.0 ml of deionized water were mixed with phosphate buffer (2.5 ml, 0.2 M, pH 6.6) and 1% potassium ferricyanide (2.5 ml). The mixture was incubated at 50°C for 20 min. Aliquots of trichloroacetic acid (2.5 ml, 10%) were added to the mixture, which was then centrifuged at 1036x g for 10 min. The upper layer of solution (2.5 ml) was mixed with distilled water (2.5 ml) and a freshly prepared FeCl3 solution (0.5 ml, 0.1%). The absorbance was measured at 700nm. Ascorbic acid was used as a standard. Increased absorbance of the reaction mixture indicated increased reducing power.

Determination of Hydroxyl Radical Scavenging Activity: The scavenging capacity for hydroxyl radical was measured on the basis of Fenton reaction 14.

A 1.0 ml portion of the incubated mixture was mixed with 1.0 ml of 10% TCA and 1.0 ml of 0.5% TBA (in 0.025M NaOH containing 0.025% BHA) to develop the pink chromogen measured at 532 nm. The hydroxyl radical scavenging activity of the extract is reported as % inhibition of deoxyribose degradation and is calculated as;

Extracts (10-320μg/ml) in distilled water were added to a H2O2 solution (0.6 ml, 40 mM). Absorbance of H2O2 at 230 nm was determined 10min later against a blank solution containing the phosphate buffer without H2O2. The % of H2O2 scavenging of both the extracts and standard compounds were calculated:

DPPH Assay: DPPH is a stable free radical and accepts an electron or hydrogen radical to become a stable diamagnetic molecule. The reduction capability of DPPH radical is determined by the decrease in absorbance at 517nm induced by antioxidants. The extracts are able to reduce the stable radical DPPH to the yellow colored diphenyl picrylhydrazine 16.

From Fig. 1 we observe that a dose-response relationship is found in the DPPH radical scavenging activity; the activity increased as the concentration increased for each individual of ethanolic extract of Dillenia indica L. The leaf extract demonstrated H-donor activity. From the present result it may be postulated that Dillenia indica L. extract reduces the radicals to the corresponding hydrazine when it reacts with the hydrogen donor in the antioxidant principles. DPPH radicals react with suitable reducing agent, the electrons become paired off and the solution loses color stoichiometrically depending on the number of electrons taken up. 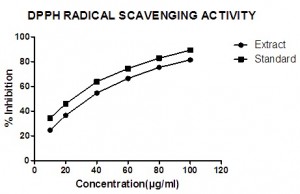 Reducing Power Ability: Figure 2 shows the reductive capabilities of the extract when compared to the standard and ascorbic acid. The reducing properties are generally associated with the presence of reductones, which have been shown to exert antioxidant action by breaking the free radical chain by donating a hydrogen atom. Reductones are also reported to react with certain precursors of peroxide, thus preventing peroxide formation. The reducing power increased with increasing amount of the extract. Increased absorbance of the reaction mixture indicated increased reducing power 17. The whole plant extract showed the highest reducing ability. However, the activity was less than the standard, ascorbic acid. 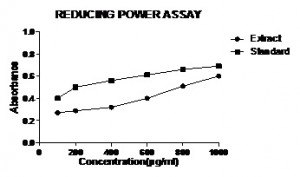 Oxygen radicals may attack DNA either at the sugar or the base, giving rise to a large number of products. Figure 3 shows the effect of the extracts on the Iron (II)-dependent deoxyribose damage. Extent of hydroxyl radical scavenged was determined by the decrease in intensity of pink coloured chromophore in the form of IC50 values which was determined at 532nm. Lower IC50 value represents higher antioxidant activity 18. The antioxidant activity was compared with ascorbic acid as standard.

The Dillenia indica L. was the capable of reducing DNA damage at all concentrations (IC50 = 64.4 μg/ml). Ascorbic acid, used as a standard was highly effective in inhibiting the oxidative DNA damage, showing an IC50 = 48 μg/ml 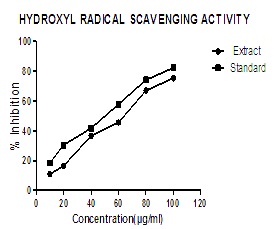 Hydrogen Peroxide Radical Scavenging Activity: Hydrogen peroxide is a weak oxidizing agent that inactivates a few enzymes directly, usually by oxidation of essential thiol (-SH) groups. It can cross cell membranes rapidly; once inside the cell, it can probably react with Fe2+ and possibly Cu2+ ions to form hydroxyl radicals and this may be the origin of many of its toxic effects. 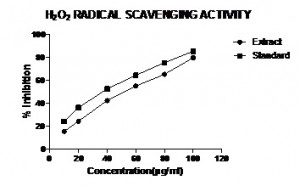 ACKNOWLEDGMENT: Authors are thankful to Dr. Vilasrao Kadam, Principal of Bharati Vidyapeeth’s College of Pharmacy, Navi Mumbai, for motivation and support and also for providing necessary facilities at our institute to carry out study.