Categories Menu
Home » IN VITRO EVALUATION OF ANTIOXIDANT AND ANTIMICROBIAL ACTIVITY OF SERIES OF NEW PYRAZOLE DERIVATIVES; A STUDY ON THE STRUCTURE-ACTIVITY RELATIONSHIP

In present study, a series of new synthesized condensed pyrazole derivatives 1a-f have evaluated in vitro for their antioxidant activity, reducing power ability, antibacterial activity against Gram-positive and Gram-negative organisms and antifungal activity against different organisms. Minimum inhibitory concentration against the bacterial and fungal strains was determined. The study provides the structural impact of the compounds for their biological activity.

INTRODUCTION: Free radicals play an important role in various pathological and xenotoxic effects so antioxidant may have protective role in these pathological conditions. Living organisms have antioxidant defense systems that protects against oxidative damage by removal or repair of damaged molecules 1.

The term ‘antioxidant’ refers to the activity of numerous vitamins, minerals and phytochemicals which provide protection against the damage caused by ROS 2. Antioxidants interfere with the oxidative processes by scavenging free radicals, chelating free catalytic metals and by acting as electron donors 3.

Resistance of pathogenic bacteria to available antibiotics is quickly becoming a major problem in the community and hospital based healthcare settings. Antimicrobials are one of the very important categories of drug.  So it is quite clear from the spectrum of use that these categories of drugs are very important from medical point of view. But microbial resistance towards the drug creates a very serious problem; because of development of resistance, many drugs are now useless which were very effective before. Moreover, the toxic effects produced by these antibiotics are also reducing their significance 4. So there is need for new antimicrobial agents for resistant microbial infections.

The chemistry of five membered heterocycles containing pyrazole moiety has flourished with considerable intensity because of their synthetic and biological applications. A number of pyrazole derivatives have been reported to act as antimycobacterial 5, anticancer 6, analgesics and anti-inflammatory 7, antiepileptic 8, antihypertensive 9, ulcerogenic and lipid peroxidation properties 10. Pyrazole derivatives were known to possess potential antimicrobial, antioxidant activities and reducing power abilities 11-13 and antitumor activity 14.

In view of enormous biological applications associated with pyrazole nucleus, in the present study, a series of new synthesized pyrazole derivatives 1a-f were selected to study their biological activities. This paper describes the in vitro screening and their results of their antimicrobial activity, minimum inhibitory concentrations, antioxidant activity and reducing power ability of the new synthesized pyrazole derivatives 1a-f 15.

DPPH Radical Scavenging Assay: The effect of the samples 1a-f in addition to the standard antioxidant butylated hydroxyl toluene (BHT) on DPPH radical was estimated 16. Samples dissolved in methanol (0-50 µg/mL for samples 1a-f; 0-5 µg/mL for BHT) in 200 µL aliquot was mixed with 100 mM tris-HCl buffer (800 µL, pH 7.4) and then added 1 mL of 500 µM DPPH in ethanol (final concentration of 250 µM). The mixture was shaken vigorously and left to stand for 20 min at room temperature in the dark. The absorbance of the resulting solution was measured Spectrophoto-metrically at 517 nm. The capability to scavenge DPPH radical was calculated using the following equation;

All the experiments were carried out in triplicates (n=3) and the results are expressed as mean of the three determinations.

Measurement of Reducing Power: The reducing power of samples 1a-f was determined by the method 17-18. The samples 1a-f (0-50 µg/mL) was mixed with an equal volume of 0.2 M phosphate buffer, pH 6.6 and 1% potassium ferricyanide. The mixture was incubated at 50oC for 20 min. Then an equal volume of 10% trichloroacetic acid was added to the mixture and then centrifuged at 5000 rpm for 10 min. the upper layer of solution was mixed with distilled water and 0.1% ferric chloride at a ratio of 1:1:2 and the absorbance were measured at 700 nm. Increased absorbance of the reaction mixture indicated increased reducing power. All the experiments were carried out in triplicates (n=3) and the results are expressed as mean of the three determinations.

Antibacterial Activity: Gram-negative bacteria species such as Escherichia coli, Salmonella typhimurium, Gram-positive bacteria species such as Bacillus substilis, Staphylococcus aureus were used as antibacterial test strains. The representative compounds (1a-f) were screened at the concentration (50 µg/mL) in methanol on the nutrient agar media. The antibiotic streptomycin was used as standard drug against bacteria. The paper discs inoculated with bacteria were incubated for 24 hrs at 37oC. After the period of incubation, the zone of inhibition produced by the test compounds was measured in mm. The screening tests were performed in triplicate and the results were taken as a mean of three determinations.

The cultures were incubated for 24 hrs at 37oC and the growth was monitored visually and Spectrophoto-metrically. The lowest concentration required to arrest the growth of bacteria was regarded as minimum inhibitory concentration (MIC). All the experiments were carried out in triplicate and the results were taken as a mean of three determinations.

Antifungal Activity: The test compounds (1a-f) were tested for their antifungal activity against the fungi species Aspergillus niger, Aspergillus flavus, Candida albicans and Fusarium oxysporium strains at a concentration of 25 µg/mL in DMF on the nutrient agar media. The antibiotic Griseofulvin was used as standard drug against fungi. The paper discs inoculated with fungi were incubated for 72 hrs at 37⁰C. After the period of incubation, the zone of inhibition produced by the test compounds was measured in mm. The screening tests were performed in triplicate and the results were taken as a mean of three determinations.

Minimum inhibitory concentrations (MICs) were determined by broth dilution technique. The cultures were incubated for 72 hrs at 37⁰C and the growth was monitored visually and spectrophotometrically. The experiments were carried out in triplicate and the results were taken as a mean of three determinations.

Mechanistic considerations of Antioxidant Activity: 2,2-Diphenyl-1-1-picrylhydrazyl is a stable organic nitrogen radical used as a scavenger for other radicals. It was characterized by a typical deep purple color and has maximum absorbance in the range of 515-520 nm. DPPH radical scavenging test evaluates in vitro antioxidant capacity. In presence of hydrogen/electron donor (free radical scavenging antioxidants), the absorption intensity is decreased and the radical solution is decolorized to pale yellow color according to the number of electrons captured.

On the basis of this speculation, the C7 and/or C8 positions of the fused pyrazole may be the active site responsible for antioxidant activity of the screened pyrazole derivatives. The compounds 1a-f are potential enough to give of two hydrogen atoms and 2 electrons, while doing so, they produces a stable 3-aryl-1,5-diphenyl-1,6-dioxo-pyrrolo[3,4-d]pyrazoles 2 (Scheme 1). 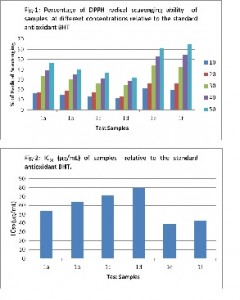 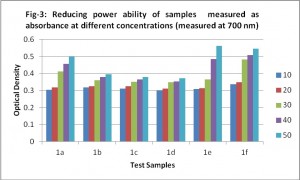 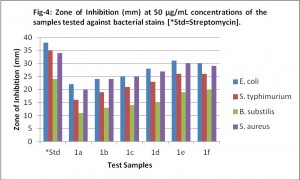 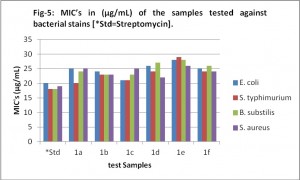 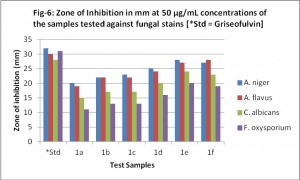 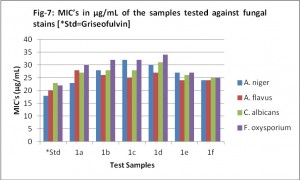 The test samples 1a-f was evaluated for their reducing power ability to reduce ferric chloride and potassium ferricyanide complex. It was observed that at the initial concentrations of (10-20 µg/mL), there was no significant variations in the activity. However, when the concentration was increased (30-50 µg/mL), all showed remarkable reducing power.

The studies on the antibacterial evaluation of the test compounds 1a-f revealed that, these compounds were highly active against the E. coli and S. aureus, good against S. typhimurium and moderately active against B. substilis. The compounds 1e and 1f showed remarkable activity against all the organisms; which is attributed due to the presence of electronegative chloro substituents on the benzene ring.

The compound 1a exhibited moderate activity against all the organisms, the sample 1a containing electron donating –OCH3 group on the benzene ring showed relatively higher activity compare to 1a. The results indicated that with increase in the number of electron donating –OCH3 groups on the benzene ring further enhanced their activity as in samples 1b-d (Fig. 4).

The MIC’s results shows that, the concentration of the test samples 1a-f required to exhibit inhibition were not much deviated from the MIC’s of the standard streptomycin (Fig. 5), which shows these can be used as effective antibacterial agents against these organisms at lower concentrations.

The minimal inhibitory concentration (MIC’s) measurements results indicate that, the concentration required for inhibition against all organisms were very much closer to the concentration of standard Griseofulvin (Fig. 7), which shows these can be used as potential antifungal agents against these organisms.

CONCLUSION: The divergence in their biological activity of the compounds validates the significance of this study. The experimental results indicate the potential electron donating ability, reducing power ability and remarkable antibacterial and antifungal activities. Some of these compounds may be used as reference standards for in vitro evaluation of antioxidant and antimicrobial activity studies.