The in vitro activity of the petroleum ether extract of fruit part of Phyllanthus acidus was tested for cytotoxic antibacterial and antioxidant activities as well as for phytochemical screening. The plant was collected from Savar, Dhaka. Phytochemical screening of petroleum extract of phyllanthus acidus revealed the presence of carbohydrate, glycoside and steroid. The extract exhibited antibacterial activity was determined by the disc diffusion method against thirteen pathogenic bacteria and the cytotoxic activity was performed by brine shrimp lethality bio-assay method. The higher concentrations showed antimicrobial activity against a number of bacteria including Salmonella typhi, Staphylococcus aureus, Bacillus cereus, Escherichia coli, Bacillus megaterium. In brine shrimp lethality bio-assay, the LC50 value was 3.12. The phenolics contents was 159.601 mg/g GAE and the amount of flavonoid was 24.183 mg/g of quercetin equivalent. The DPPH radical scavenging activity of Phyllanthus acidus was found to slight increase with increasing concentration of the extract and IC50 value showed 1192.263 µg mL−1 for plant extract compared to 13.37 µg mL−1 which was the IC50 value for the reference ascorbic acid.

INTRODUCTION: For development of new drugs from medicinal plants are still continuing all over the world and new drugs are discovered and developed everyday. Many of the present days important drugs and processed medicines are of plant origin. The suitable weather and fertile soil have made Bangladesh a great source of medicinal plants. About 500 species are being used here in the purpose of traditional medication 1. From a survey in different villages of Bangladesh, it has been seen that if people suffer from illness approximately 14% of them go to qualified allopathic doctors, 29% contact unqualified village doctors, 10% contact mullahs, 29% contact quacks and 19% contact with homeopathic practitioners 2.

The present study is so designed for phytochemical screening of the plant as well as antibacterial and cytotoxic activities also with antioxidant activities of the fruit part of petroleum ether extract of Phyllanthus acidus. Organisms have self defense mechanisms to protect themselves from the free radicals attack such as preventive antioxidant system that reduces the rate of free radical formation, and another is system to produce chain-breaking antioxidants that scavenge and stabilize free radicals. If free radical production rate exceeds the normal capacity of the antioxidant defense mechanisms, substantial tissue injury results 3.

Continuous exposure to chemicals and contaminants may lead to an increase in the amount of free radicals in the body beyond its capacity to control them and may lead to irreversible oxidative damage which includes biological damage, DNA damage, diabetes, respiratory tract disorders, carcinogenesis and cellular degeneration related to aging 4, 5. In recent years the interest in natural antioxidants, especially of plant origin, has greatly increased as the possibility of toxicity of synthetic antioxidants 6.

Description and Medicinal Use: P. acidus, locally named as Arbaroi in Bangladesh and gooseberry or star gooseberry in India, is an edible small yellow berries fruit in the Phyllanthaceae family. Fruits are borne in loose clusters, are pale yellow or white, waxy, crisp and juicy, and very sour, found in Bangladesh, South India, and Southeast Asian countries. The medicinal activities of Phyllanthus species are antipyretic, analgesic, anti-inflammatory, antihepatotoxic and antiviral 7-10. Fruits of the two well-known species, P. acidus L. and P. emblica L., contain high contents of vitamin C and have been used for used for improving eyesight and memory and preventive action against Diabetes and relief of coughing 11. Another species of the family, P. amarus is an important herbal medicine due to its effective antiviral activities especially toward the hepatitis B virus 12-14.

Collection of plant material & extraction: The collected fruit samples were dried (after cutting and slicing where necessary) in the sun and finally in a mechanical dryer at 60- 70oC. The dried sample was ground to coarse powder with a mechanical grinder (Grinding Mill) and powdered sample were kept in clean closed glass containers pending extraction. The dried sample subjected to extraction by Petroleum ether with a volume of 800 ml for 03 days for allowing total extraction process after the extraction process the Phyllanthus acidus plant extract was filtered with sterilized cotton filter. The filtrate was collected in a beaker. The Phyllanthus acidus plant extract was concentrated by evaporating the solvent using a water bath at a temperature of 60oC. The container was allowed to air tight for 72 hours. The filtrate thus obtained was concentrated by using a rotary evaporator.

Phytochemical screening: The freshly prepared crude extract was qualitatively tested for the presence of chemical constituents using the following reagents and chemicals: Alkaloids with Dragondroffs reagent, flavonoids with the use of Mg and HCl; tannins with ferric chloride and potassium dichromate solutions and saponins with ability to produce stable foam and steroids with Libermann Burchard reagent, Carbohydrate with Benedict’s reagent and glycoside and resins were also tested. These were identified by characteristic color changes using standard procedures [15.

Cytotoxic study: The cytotoxicity of petroleum ether extract was tested on brine shrimp nauplii (Artemia salina Leach) according brine shrimp lethality bioassay 18. For hatching eggs were kept in brine with a constant oxygen supply for 48 hours. The matured nauplii were then used in the experiment. Test sample was applied at different concentrations and the number of viable organisms was applied was counted after 24 hours for determination of LC50 values. DMSO was used as a solvent and also as negative control test was one in triplicate.

Determination of total antioxidant capacity: The antioxidant activity of the extracts of P. acidus was evaluated by the phosphomolybdenum method according to the procedure of Prieto et al. 21. The assay is based on the reduction of Mo (VI)- Mo (V) by the extract and subsequent formation of a green phosphate/Mo (V) complex at acidic pH. 0.3 ml extract was combined with 3 ml of reagent solution (0.6 M sulfuric acid, 28mM sodium phosphate and 4mM ammonium molybdate). The tubes containing the reaction solution were incubated at 95o C for 90 min. Then the absorbance of the solution was measured at 695 nm using a spectrophotometer (Shimadzu, UV-150-02) against blank after cooling to room temperature. Methanol (0.3 ml) in the place of extract is used as the blank. The antioxidant activity is expressed as the number of equivalents of ascorbic acid.

DPPH radical scavenging activity: The free radical scavenging capacity of the extracts was determined using DPPH 22, 23. A methanol DPPH solution (0.004% w/v) was mixed with serial dilutions (0 to 500 μg) of P. acidus extracts and after 10 min; the absorbance was read at 515nm using a spectrophotometer. Ascorbic acid was used as a standard. The inhibition curve was plotted and IC50 values were calculated.

Cupric Reducing Antioxidant Capacity (CUPRAC): The reducing power of P. acidus extractives was determined according to the method previously described by Oyaizu 24. Different concentrations of P. acidus extracts in 1 ml of distilled water was mixed with phosphate buffer (2.5 ml, 0.2 M, pH 6.6) and potassium ferricyanide [K3Fe(CN)6] (2.5 ml, 1%). The mixture was incubated at 50°C for 20 min. A portion (2.5 ml) of trichloroacetic acid (10%) was added to the mixture, which was then centrifuged at 3,000 rpm for 10 min. The upper layer of the solution (2.5 ml) was mixed with distilled water (2.5 ml) and FeCl3 (0.5 ml, 0.1%) and the absorbance was measured at 700 nm. Ascorbic acid was used as a reference standard. Phosphate buffer (pH) was used as blank solution.

Phytochemical Screening: The crude extract was qualitatively tested for the presence of Alkaloids, flavonoids, tannins, saponins, steroids, carbohydrate, glycoside and resin, and the results are shown in table 1. The performed qualitative studies indicate the presence of carbohydrate, glycoside and steroid while absence of saponin, glucoside, tanin, saponin and resins but shows mixed result for alkaloid.

Antibacterial assay: Antibacterial activities of the extract were tested against thirteen pathogenic bacteria and were compared with the standard antibiotic Kanamycin by measuring the zone of inhibition diameter and expressed in millimeter (mm) showed in table 2.

In the antimicrobial screening, the extract showed average zone of inhibition 0.5-2.5 mm (Table 2). Narrow inhibitory activity was noticed against the growth of Salmonella typhi with the zones of inhibition 2.5 mm. The concentrations above 500 μg/disc, showed little effect against a number of bacteria including Salmonella typhi, Staphylococcus aureus, Bacillus cereus, Escherichia coli, Bacillus megaterium.

The LC50 values of petroleum ether extract of P. acidus was 3.12. At the conc. of 12.5 μg/ml, 70 % nauplii died but above the 50 μg/ml concentration, all are toxic which indicates very good cytotoxic effects.

Total phenol and flavonoid content and antioxidant capacity: The total phenol, total flavonoid contents and total antioxidant capacity of Phyllanthus acidus extract were expressed in gallic acid, quercetin and ascorbic acid equivalents respectively and are presented in Table 4. The content of phenolics in this extract under this investigation showed moderate result (159.6014 mg/g GAE) and the amount of flavonoid was 24.18367 mg/g quercetin equivalent. 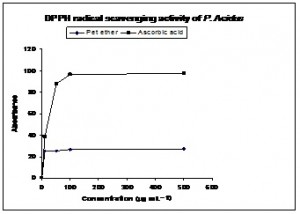 In DPPH test, which is based on the ability of DPPH, a stable free radical, to decolorize in the presence of antioxidants, is a direct and reliable method for determining radical scavenging action. Pet ether extract of Phyllanthus acidus showed moderate DPPH scavenging activity. IC50 value for the plant extracts was 1403.76 µg mL−1.Ascorbic acid was chosen as the reference antioxidant for this test and IC50 value for ascorbic acid was 13.37µg mL−1.

Cupric Reducing Antioxidant Capacity (CUPRAC): Figure 02 represents the reductive capabilities of the plant extracts compared to Ascorbic acid which was determined using the potassium ferric cyanide reduction method. The reducing power of the extract was moderately strong while increasing dose it shows no increment. The reducing properties are generally associated with the presence of reductones, which have been shown to exert antioxidant action by breaking the free radical chain by donating a hydrogen atom 26. 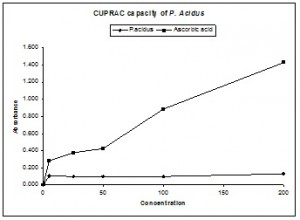 CONCLUSION: From this experiment, it can be concluded that the extract showed average zone of inhibition 0.5-2.5 mm. As apparent from our results it can be revealed that the plant extract has narrow spectrum of antimicrobial activity but it exhibited good cytotoxic effect. The antioxidant activity was found to slight increase with increasing concentration of the extract. The antioxidant capacity of plant extract  is comperatively lowest than the ascorbic acid. This is only a preliminary study and to make final comment the extract should thoroughly investigated phytochemically and pharmacologically to exploit their medicinal and pharmaceutical potentialities.