ABSTRACT: Rosuvastatin, a selective and competitive inhibitor of enzyme 3-hydroxy-3-methyl-glutaryl-coenzyme A reductase, is marked as a first-choice drug amongst lipid-lowering agents because of its unique pharmacological and pharmacokinetic properties. An additional advantage of rosuvastatin administration is its specific, non-lipid pleiotropic properties, which are considered promising new fields of research for potential new therapeutic implications of this class of drugs. The aim of this study was to evaluate the antioxidant, anti-inflammatory, and anti-microbial activity of rosuvastatin with the application of the most commonly used in-vitro assays. Rosuvastatin was dissolved in dimethyl sulfoxide and prepared as a range of different concentrations. The activity of rosuvastatin was compared to well-known antioxidant, anti-inflammatory, and antimicrobial agents. For determination of antioxidant activity, a spectro-photometric DPPH radical scavenging assay was used, while inhibition of heat-induced protein denaturation was used for evaluation of anti-inflammatory activity of tested rosuvastatin solutions. Evaluation of antimicrobial activity was performed with the application of agar-well diffusion assay against both Gram-positive and Gram-negative bacteria as well as the fungi. The results of this in-vitro study suggest that tested rosuvastatin solutions at various concentrations demonstrate antioxidant, anti-inflammatory, and antimicrobial properties. Present findings indicate that the expression of pleiotropic properties of rosuvastatin is dependent upon the concentration of rosuvastatin. However, it should be noted that findings from this study are restricted to in-vitro assays, and there is clearly a need for carrying further research involving in-vivo models.

INTRODUCTION: Rosuvastatin, the latest member of the statin class, is a selective and competitive inhibitor of the enzyme 3-hydroxy-3-methyl-glutaryl-coenzyme A reductase (HMG-CoA reductase).

With its unique pharmacological and pharmaco-kinetic properties, rosuvastatin shows the properties of an "ideal statin,” which implies that in low doses, it effectively lowers lipid levels, exhibits the maximum effect of inhibiting HMG-CoA reductase at the target site in hepatocytes, possess a longer elimination half-life, lower systemic availability and rarely interacts with other drugs 1.

Different clinical trials have shown that administration of statins results in a more effective reduction of cardiovascular risk than other non-statin hypolipidemics.

That is explained by a series of specific, non-lipid pleiotropic properties, which brings an additional advantage to statins compared to other hypo-lipidemics 2-6. The mechanism of pleiotropic activity is primarily based on the prevalence of the enzyme HMG-CoA reductase in almost every cell of the body.

Therefore, statins, besides to inhibiting the action of HMG-CoA reductase in hepatocytes, also blocks the enzyme in endothelial cells, myocyte, and inflammatory cells. However, the reduction of isoprenoid synthesis in the process of cholesterol biosynthesis in hepatocytes due to the inhibition of HMG-CoA reductase is considered to be the most significant driver of statin pleiotropic activity 7.

Pleiotropic properties of statins are promising new fields of research for a potential new therapeutic implication of this class of drugs. In recent years, various studies were published underlining the anti-inflammatory and antioxidant activity of the statins 6, 7, 8.  Furthermore, it has been found that statins interfere with oxidation in several pathways that result in the reducing process of atherosclerosis 9.

Also, it has been confirmed that statins inhibit different inflammation markers such as C-reactive protein 10, interleukins, interferons, and tumor necrosis factor-α 11, 12.

Different in-vivo and human studies have shown that individuals treated with statins are less prone to bacterial infections underlining its antimicrobial activity as well 13, 14, 15.  This study aimed to evaluate the antioxidant, anti-inflammatory, and antimicrobial activity of rosuvastatin with an application of the most commonly used in-vitro assays.

The test tubes were stored in a dark place and kept at room temperature for 20 min, after which the absorbance was measured at 517 nm. The absorbance of the ethanolic solution of DPPH was also measured and served as a control solution. An experiment was performed in triplicate. Antioxidant activity was expressed as Radical Scavenging Capacity (RSC) and calculated using the following formula:

The reaction mixture consisted of 2.0 ml of tested solution, 2.8 ml phosphate buffer saline with adjusted pH 6.4, and 0.2 ml of egg albumin. The same reaction mixture served as the control, except the tested solution was replaced with distilled water. Mixtures were incubated for 15 min at 37 °C ± 2 °C and then heated for 5 min at 70 °C. After cooling down at room temperature, their absorbance was measured at 660 nm 16.

An experiment was performed in triplicate. Anti-inflammatory activity was expressed as the inhibition of protein denaturation (%) and calculated by using the following formula:

In-vitro Antimicrobial Activity: Agar well diffusion assay was used for evaluation of the antibacterial activity of both Gram-positive and Gram-negative bacteria, as well as the antifungal activity. The following strains were obtained from the American Type of Culture Collection (ATCC): Staphylococcus aureus (ATCC6538), Listeria monocytogenes (ATCC 35152), Pseudomonas aeruginosa (ATCC 9027), Escherichia coli (ATCC8739), and Candida albicans (ATCC10231). For preparing inoculums, suspensions of microorganisms were adjusted on 0.5 McFarland standards (approximately 1.5 × 108 CFU/ml) and cultured on nutrient agar. With the usage of sterile borer, wells with 6 mm diameter were created on agar in every Petri plate. The solution of rosuvastatin was prepared by dissolving in DMSO at the following concentrations: 0.10, 0.25, 0.35, and 0.50 mg/ml.

A volume of 100 µl of tested solutions was added into wells, as well as the DMSO, which served as a negative control. The following standard antibiotics served as positive control: Chloramphenicol (30 µg/disc), Ceftizoxime (30 µg/disc), Amikacin (30 µg/disc), and Nystatin (100 µg/disc). Then, Petri plates with bacteria were incubated at 37 °C for 18-24 h and plates with fungi at 25 ºC for 48 h. After the incubation period, the diameter of the resulting zone of inhibition was measured. An experiment was performed in triplicate, and obtained values of the diameter of zone of inhibition were proportional to the degree of antimicrobial sensitivity of tested solutions. 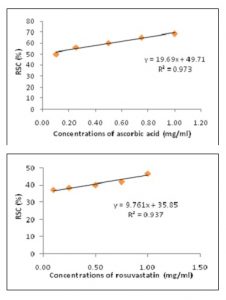 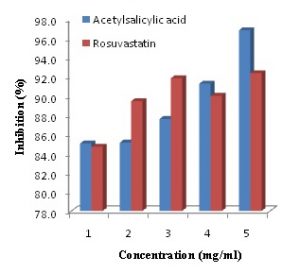 In conclusion, tested solutions of rosuvastatin have demonstrated significant in-vitro pleiotropic activity confirming that administration of this drug can go beyond the treatment of hyperlipidemia. However, it should be noted that findings from this study are restricted to in-vitro assays, and there is clearly a need for carrying further research involving in-vivo models.