ABSTRACT: This in-vitro antidiabetic and cytotoxic activity of earthworm Lumbricus rubellus extracts were investigated. In the present study, three types of solvent (petroleum ether, 95% ethanol and phosphate buffer) extracts of earthworm paste were prepare and subjected to preliminary screening. The antidiabetic activity was determined in terms of its ability to inhibit the α-amylase activity. Different concentrations ranging from 100-1000µg/mL of earthworm extracts were incubated with enzyme substrate solution and subjected in the determination of absorbance to assess the antidiabetic activity. Also Acarbose was used as the standard inhibitor. The 95% ethanol extracts showed the highest percentage inhibition of α-amylase activity, followed by petroleum ether and phosphate buffer. The IC50 value of 95% ethanol, petroleum ether and phosphate buffer extracts were 242.46µg/mL, 304.15µg/mL and 689.68µg/mL respectively, when compared with Acarbose (IC50 value 193.68µg/mL). The cytotoxic activity was determined towards brine shrimp lethality assay. Different concentrations ranging from 10-100µg/mL of earthworm extracts were subjected to determine the mortality of brine shrimps. Potassium dichromate was used as positive control. Results showed that the petroleum ether extract was potent against the brine shrimp with LC50 values of 7.13µg/mL, followed by 95% ethanol extract (7.28µg/mL) and phosphate buffer extract (73.50µg/mL). While the positive control exhibited LC50 value with 11.96µg/mL. The antidiabetic and cytotoxic activity of the earthworm paste produced by Lumbricus rubellus seems to be a promising new direction in drug delivery research.

INTRODUCTION: Diabetes and cancer are prevalent disease with tremendous impact on health worldwide whose incidences are increasing year-on-year. However, there is a demand for new compounds for the treatment of diabetes and cancer due to unwanted side effects of the efficacies of antidiabetic and chemotherapy agents are debatable. Earthworms are not vectors of disease nor are they annoying pests.

There are about 7000 species of earthworms on the Earth which are originated majority in the Middle East, Europe and Asia 1. They are vital component of traditional Chinese medicine and have been widely used for thousands of years. However, the research on pharmacological effects of earthworms has been initiated in the past few decades along with the development of biochemical technologies. Science has already proven that earthworm and its extracts can be used as medicinal resources but only a few species of earthworm can be used as medicine.

Several research studies were conducted to prove that earthworm protein and its coelomic fluid exhibited a variety of pharmacological activities include anti-inflammatory, anti-oxidative, anti-tumor and antibacterial effect 2, 3. Some active proteins and compounds in earthworm are responsible in pharmacological effect such as fibrinolytic enzymes, lumbrokinase, collagenase, superoxide dismutase, cholinesterase, catalases, glycosidases, metallothionein, calmodulin-binding protein, protein with proliferation improving activity, lysenin, antitumor protein and so on 4. In fact, earthworms are inexpensive and require less ethical concerns. They have been used as medicine for centuries to cure several diseases. They are worthy of critical attention for analyzing the nervous, immune and endocrine systems. Therefore, the following study was conducted to identify the potential antidiabetic and anticancer activity of earthworm (Lumbricus rubellus) extract with different methods.

Collection of Earthworms: 1kg cultured Lumbricus rubellus was collected from the vermin composting unit near Klang, Selangor. Approximately 500 earthworms were washed with running water and drained to remove dirt from the body surface. The earthworms then were soaked in distilled water for 6 to 8 hours to allow the soil in its tract to be extracted. Later the earthworms were washed thoroughly with distilled water and collected in a petridish, which then kept in an incubator at 55°C. The drying process took around 3 days. The earthworm pastes were stored in refrigerator at normal temperature 5.

Preparation of Earthworm Extracts: About 10-20g of earthworm pastes were homogenized separately in different solvents used according to decreasing polarity such as that is phosphate buffer (0.2M, pH 7.0), 95% ethanol and petroleum ether. The homogenized mixtures prepared separately in different solvents were filtered and the filtrates obtained were condensed in water-bath at 35°C 6. The crude extracts obtained were diluted in 10% dimethyl sulphoxide (DMSO). The earthworm extracts were first diluted to make a stock concentration of 1000µg/mL for evaluation of antidiabetic activities. While the remaining extracts were diluted in artificial seawater (38g NaCl in 1L distilled water). The earthworm extracts were then diluted to make a stock solution of 100µg/mL.

Salkowski Test: In 2mL of extract, 2mL of chloroform was added. Equal volume of concentrated sulphuric acid (H2SO4) was added by sides of the test tube. Chloroform layer appeared red and acid layer greenish yellow fluorescent. This confirms the presence of sterols 7.

Test for Terpenoids: 2mL of extract was added to 2mL of acetic anhydride. 3mL concentrated H2SO4 was carefully added to form a layer. A reddish brown colouration of the interface is formed to show positive result of the presence of terpenoids 7.

Fehling’s Test: Fehling A and Fehling B reagents were mixed and few drops of extract are added and boiled. A brick red coloured precipitate of cuprous oxide forms, hence confirming the presence of carbohydrates 7.

Foam Test: The extract was diluted with 20mL distilled water and it was shaken in a test tube for 15 minutes. A layer of foam was formed which indicated the presence of saponin 7.

Test for Flavonoids: A small quantity of extract is heated with 10mL of ethyl acetate in boiling water for 3 minutes. The mixture is filtered and the filtrated are used for the following test.

Aluminium Chloride Test: The filtrates were shaken with 1mL of 1% aluminium chloride solution and observed for light yellow colour, which appeared indicating the presence of flavonoids. When dilute NaOH and HCl is added, the yellow solutions turns colourless 7.

Ferric Chloride Test: 2mL of aqueous extract was added to 2mL of water. 1 to 2 drops of diluted ferric chloride solution was added. A dark green or blue green colouration which appear indicates the presence of tannins 9.

The extract was warmed with 2% H2SO4 for 2 minutes. It is filter and few drops of reagents were added separately 7.

Wagner’s reagent: a reddish brown precipitate appeared which also confirms the presence of alkaloids in the extract.

Antidiabetic Activity-Inhibition of α-Amylase Assay: 1mL of each earthworm extracts (100, 200, 400, 800 and 1000µg/mL) and 1mL of the enzyme solution were mixed in a test tube and incubated at 25°C for 30min10. To 1mL of this mixture was added 1mL of the 0.5%w/v starch solution and the tube was further incubated at 25°C for 3min. Then 1mL of the color reagent was added and the tube was placed into an 85°C water bath. After 15min, the reaction mixture was removed from the water bath and cooled thereafter, diluted with 9mL distilled water. The absorbance was measured at 540nm using spectrophotometer. Individual blanks were prepared for correcting the background absorbance. The color reagent solution was added before the addition of starch solution. Then the tube was placed into the water bath and the method was followed as described above. Controls were conducted in identical manner, replacing the extracts with 1mL DMSO. Acarbose solution was used as positive control. The experiment was carried out 6 replicates and the percentages inhibition was calculated as:

The inhibition of α-amylase (%) was plotted against sample concentration and a logarithmic regression curve was obtained in order to calculate the IC50 value which is concentration of sample (µg/mL) necessary to decrease the absorbance of α-amylase solution by 50%.

Cytotoxic Activity-Brine Shrimp Lethality Assay: About 100mg dried cysts were allowed to hatch in 100mL seawater at 28-30°C, under conditions of continuous illumination and strong aeration 11. 10 nauplii were drawn through a glass capillary and placed in each 12-well culture plate containing 4.5mL of brine solution. The earthworm extract 0.5mL (10, 50, 100, 500 and 1000µg/mL) of the earthworm extracts were added to 4.5mL brine solution 12. After the incubation for 24 hours at 25 °C, the number of survivors was counted under microscope and the percentage of mortality was calculated. The percentage of mortality (% M) was calculated as:

LC50 (50% lethal concentration, µg/ml) was determined from 6 replicates experiments. The logarithm of concentration versus percentage of mortality was plotted and the values of LC50 were calculated by using Microsoft Excel program. Potassium dichromate was used as positive control and solvent was used as negative control.

Preliminary Phytochemical Screening: In this study, the results of preliminary phytochemical screening were summarized in Table 2.

The maximum percentage inhibition of α-amylase activity was shown in 95% ethanol extract with 93.60±3.46% which is comparatively higher than the percentage inhibition of Acarbose as a standard drug with 87.90±4.85%, followed by petroleum ether extract (84.18±4.72%) and phosphate buffer extract (53.85±3.80). The IC50 value for ethanol, petroleum ether and phosphate buffer extracts of Lumbricus rubellus were 242.46µg/mL, 304.15µg/mL and 689.68µg/mL respectively which comparatively higher than IC50 of Acarbose as a standard with the value of 193.68µg/mL. Thus, it becomes evident that Acarbose produced more inhibition of α-amylase activity in lower concentration.

Narkhede et al. (2011) conducted a study on in-vitro antidiabetic activity of Caesalpina digyna methanol root extract by using a similar method 13. The results showed that the maximum percentage inhibition was 61.31±0.3729% with the IC50 value of 686.94±3.98µg/mL. The IC50 of Acarbose as a standard drug was found to be 325.50±4.7µg/mL. This revealed that Lumbricus rubellus extracts were able to perform a better antidiabetic activity compared to other plants.

Many bioactive compounds, especially phenolic, triterpenoids and flavonoids from different plants which have been reported to have hypoglycemic effect have a positive correlation as antidiabetic agents 14, 15. In another study done by Hridi et al. (2013) showed that the ethanol extracts of Hiptage benghalensis which exhibited the presence of flavonoids and terpenoids have been reported to possess antidiabetic properties 16. Pradeep (2013) also reported that the maximum possibly of antidiabetic activity of the ethanolic extract of Strobilanthes asperrimus leaves was the presence of tannins, flavonoids and alkaloids 17. These revealed that the inhibitory α-amylase activity of Lumbricus rubellus extracts may be as a result of the existence of various phytochemicals like flavonoids, steroids, terpenoids and glycosides. 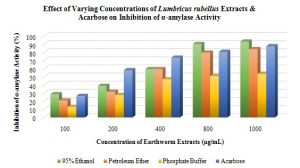 FIG. 1: EFFECT OF VARYING CONCENTRATIONS OF LUMBRICUS RUBELLUS EXTRACTS AND ACARBOSE ON INHIBITION OF α-AMYLASE ACTIVITY

This revealed that Lumbricus rubellus extracts were able to perform a better cytotoxic activity compared to other plants. The cytotoxic effect of plant is principally contributed by the presence of secondary metabolites such as alkaloids, glycosides, steroids, tannin, phlobatannin, terpenoids and flavonoids in their extracts 20. Lay et al. (2014) reported that the high amount of flavonoids, glycosides, saponin glycosides, phenolic compounds, tannins and terpenoids present in P. macrocarpa fruit may contribute to the antioxidant and cytotoxic properties 21. These are consistent with the present study as the preliminary phytochemical screening showed the presence of steroids, terpenoids, glycosides and flavonoids in Lumbricus rubellus extracts. 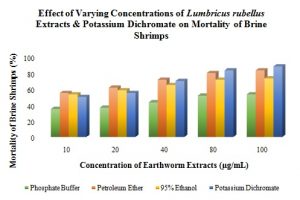 CONCLUSION: The earthworm Lumbricus rubellus showed significant antidiabetic and cytotoxic effect. Earthworms seem to be a promising new direction in drug delivery research. Hence, this finding indicates that the Lumbricus rubellus extracts could be developed as an anticancer agent with further detailed study on compound isolation, purification and characterization.

Further toxicity studies could be conducted on individual cell lines to confirm the toxic effect of phytochemical groups.

ACKNOWLEDGEMENTS: The author would like to thank Asia Metropolitan University for the kind generous financial support of this project. Without this support, I could not perform this scientific research work.

DECLARATION OF INTEREST: The author has declared no conflict of interest.