ABSTRACT: Diabetes is a metabolic disorder characterized by absolute or relative deficiency of insulin. Today, globally many therapeutic approaches are being innovated to decrease the postprandial glucose levels and adsorption through the inhibition of enzymes, α- amylase and α- glucosidase. Presently, these two enzymes offer for the maintenance of glucose levels in diabetic patients by hydrolyzing the carbohydrates ingested in the food. The aim of the present study was to screen the three different extracts, ethyl acetate, n-butanol and benzene of Foeniculum vulgare Mill. seeds for its in-vitro antidiabetic activity by α-amylase and α-glucosidase inhibition assay. The obtained results showed that all the three extracts had high alpha-glucosidase inhibitory affect than the alpha-amylase inhibition when compared with the standard acarbose values. The preliminary phytochemical analysis of all the extracts showed the presence of phenols, saponins, terpenoids, tannins and flavonoids in all extracts. These secondary metabolites can serve to maintain the glucose level in the blood and hence act as hypoglycemic agents.

INTRODUCTION: Foeniculum vulgare Mill. (Apiaceae family) commonly known as fennel, is one of the widespread annual or perennial plants with aromatic odour. Fennel herbal infusions and instant teas containing fennel seed extract, is a common household remedy used for the treatment of a variety of symptoms of the gastrointestinal and respiratory tract in some areas of Europe and Asia 1. Many studies have showed that F. vulgare effectively controls numerous infectious disorders of bacterial, fungal, viral and protozoan origin 3, 4, 5. It has antioxidant, antitumor, chemopreventive, cytoprotective, hepatoprotective, hypoglycemic, and oestrogenic activities 2, 5, 6, 7, 8.

Animal experiments and limited clinical trials suggested that chronic use of F. vulgare is not harmful. Administration of 30 mg/kg of essential oil of F. vulgare to streptozotocin induced diabetic rats corrected the hyperglycemia and the activity of serum glutathione peroxidase and also improved the pathological changes noticed in their kidney and pancreas proving its potential antidiabetic nature 8.

Diabetes mellitus (DM), a state of chronic hyperglycemia, is a common disease affecting over 124 million individuals worldwide which is predicted to increase to 642 million people by 2040 9, 10, 11. The awareness on the issue has led to a vast discovery of new medications as well as natural products extracted from herbal plants. Many active ingredients extracted from herbal plants possess therapeutic values, i.e. hypoglycemic activity, antioxidant action, etc. and they are yet to be discovered 12.

In human, salivary amylase, pancreatic amylase and alpha-glucosidase are the enzymes involved in the digestion of starch. All complex carbohydrates like starch and sucrose have to be converted to simple carbohydrates in the small intestine by an enzyme alpha-glucosidase before absorption. Drugs which inhibit the action of alpha-amylase are known as amylase inhibitor and drugs which inhibit alpha-glucosidase are known as glucosidase inhibitor, preventing the breakdown of complex carbohydrates thereby delay or preventing carbohydrate absorption 13. Inhibition of amylase and glucosidase enzymes can be an important strategy in management of post prandial blood glucose level in type 2 diabetes patient. Hence, this study was conducted to determine the inhibition effect of the different extracts of F. vulgare on α- amylase and α- glucosidase enzymes which helps to control sugar level by delaying the breakdown of carbohydrates and its absorption and also to increase the scientific evidence for the antidiabetic activity of F. vulgare.

Samples Preparation: The fennel seeds were purchased from local markets in Chennai, Tamil Nadu, India. The taxonomical identification and authentication was done by Dr. D. Aravind, Assistant Professor, Department of Medicinal Botany, National Institute of Siddha, Tambaram, Tamil Nadu, India. The voucher specimen obtained was NISMB2202016. The seeds were cleaned physically to remove foreign particles. Then the seeds were grounded in a mechanical grinder. 50 g dried and powdered seeds were mixed separately with 250 ml of ethyl acetate, benzene and n-Butanol separately and continuously extraction was done for 5 to 6 h 14. Then the mixture was filtered using Whatmann no.1 filter paper. Twelve crude extracts thus obtained was concentrated by using rotary vacuum evaporator under reduced pressure and stored at 4 ºC in labelled sterile screw-capped bottles for further use until needed for analysis.

Phytochemical Analysis: The filtrate was tested for the presence of phytochemicals such as alkaloids, flavanoids, saponins, tannins, phenols, carbohydrates, cardiac glycosides, terpenoids and proteins using standard procedures of Trease and Evans, (1989) 15; Harborne, (1973) 16; Sofowara, (1993) 17.

Alpha-amylase Inhibition Assay: The adopted method was modified from Adefegha and Oboh, (2016) 18. 250 μl of 0.02M sodium phosphate buffer containing α-amylase solution (1 mg/mL) and 500 μl of samples of varying concentration were incubated at 37 °C for 10 min. After pre incubation, 250 μL of 0.5% starch solution in 0.02M sodium phosphate buffer was added. The reaction was incubated at room temperature for 10 min. 1 mL of DNSA color reagent was added to stop the reaction. The test tubes were then incubated in boiling water bath for 10 min and cooled to room temperature. The assay was performed in duplicates.  The absorbance was read at 540 nm. Acarbose was used as the reference alpha amylase inhibitor. All tests were performed in triplicates. Percentage of inhibition was calculated using the below formula:

Alpha-glucosidase Inhibition Assay: The procedure for the assay was modified from Munir et al., (2017) 19. Alpha-glucosidase (20 μl, 1.25 u/ml) was premixed with 200 μl of samples of various concentrations and made up in a 50 mM phosphate buffer at pH 6.8 and incubated at 37 °C for 10 min. 1 Mm pNPG dissolved in phosphate buffer was added to initiate the reaction and incubated at room temperature for 20 min. The reaction was terminated by adding 20 μl of 1M Na2CO3 and final volume was made up to 1ml with phosphate buffer. The absorbance was read at 405 nm. Acarbose was used as the reference alpha glucosidase inhibitor. All tests were performed in triplicates. Percentage of inhibition was calculated using the below formula:

Statistical Analysis: The IC50 values were determined from plots of percent inhibition versus log inhibitor concentration and were calculated by non linear regression analysis from the mean inhibitory values. All the analysis was done in triplicates and results are expressed as ± mean S.D. p- value <0.05 were considered to be statistically significant.

Among bioactive compounds mainly flavonoids and polyphenols are the natural active antidiabetic agents that are capable of inhibiting the carbohydrate metabolizing enzyme α-amylase and α-glucosidase. Several secondary metabolites including alkaloids, flavonoids, glycosides, steroids, carbohydrates, terpenoids, amino acids, saponins, and inorganic ions affects various metabolic cascades, which either directly or indirectly affects the level of glucose in the human body 20, 21. In our study, we found the presence of a bioactive phytochemical group like phenols, saponins, terpenoids, tannins and flavonoids in all extracts.

Phytochemical analysis of fennel seed extracts showed the presence of most of the phyto-constituents including flavonoids, saponins, cardiac glycosides, steroids, terpenoids and tannins, which were in agreement with the results obtained by Chaouche et al., (2011) 22 who observed that flavonoids, tannins, coumarines, saponins and sterols were found present in the stem, root and seed extracts of Foeniculum vulgare Mill. Hence, these bioactive compounds are expected to have the in-vitro antidiabetic activity either individually or in combination. Diabetes mellitus is a chronic metabolic disorder identified by hyperglycemia due to insulin insufficiency and/or insulin resistance contributing to excess blood glucose. It affected approximately 171 million people all around the world in the year 2000 and the number is projected to increase to around 366 million in 2030 23. Diabetic individuals are at an increased risk of developing acute and chronic complications such as retinopathy, nephropathy and neuropathy 24.

Management of the blood glucose level is an essential approach in the control of diabetes complications. α-amylase and α-glucosidase are key enzymes involved in carbohydrates breakdown and intestinal absorption, respectively. Inhibition of these enzymes hinders blood glucose level increase after a carbohydrate diet and can be an important strategy in the management of non-insulin-dependent diabetes mellitus 25.

Commonly used synthetic inhibitory drugs such as acarbose and miglitol possessed negative effects. Traditionally, various herbs were used directly as a medication. Clinically effective substances are now being obtained from plants, even those that have not been categorized before as medicinal herb. Currently, medicinal herbs due to simple accessibility and also lesser side effects have a unique place in medicine to treat several diseases. In fact, several classes of α-amylase and α-glucosidase inhibitory substances derived from the herb have been observed, for examples hydrolysable tannins, flavonoids, xanthones, fatty acids, terpenoids, peptides, procyanidins and caffeoyl-quinic acid derivatives 26, 27, 28.

Fennel seed extracts had shown good inhibition effect more on alpha- glucosidase enzyme than alpha-amylase enzymes which was compared to the standard acarbose. Ethyl acetate and benzene extract had good alpha-amylase inhibition Fig. 1 whereas n-butanol extract does not have any effect. All the extracts had high amount of alpha-glucosidase inhibition Fig. 2 effect when compared to standard. Recent studies have shown that plant-based α-amylase and α-glucosidase inhibitors offer a prospective therapeutic approach for the management of post-prandial hyperglycemia 33.

Our study suggests that culinary plants being not only used as a major source of nutrition, but they also possess immense medicinal potentiality to minimize the post-prandial hyperglycemia by inhibiting carbohydrate metabolizing enzyme α-amylase and α-glucosidase. 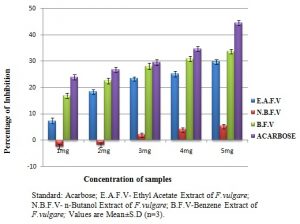 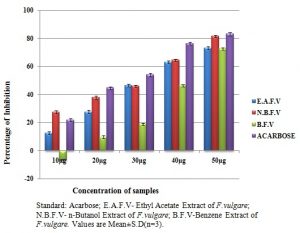 As reported by El-Soud et al., (2011) 12 ingestion of essential oil of F. vulgare to streptozotocin induced diabetic rats corrected the hyperglycaemia from (162.5 + 3.19 mg/dl) to (81.97 + 1.97 mg/dl). This makes the possibility of its inclusion in anti-diabetic drug industry. Our report will elaborate the scientific evidence for the antidiabetic nature of Foeniculum vulgare Mill with reference to the inhibition of enzymes α-amylase and α-glucosidase.

The bioactive molecules in fennel can be developed as novel pharmacological lead molecules provided their bioavailability, pharmacokinetics, and physiological pathways are known with sufficient detail. Further, research is required to carry out the screening of these bioactive compounds as to which compound possess the antidiabetic activity.

ACKNOWLEDGEMENT: We express our gratitude to Dr. K. Amutha for providing guidance for the successful completion of this work.

CONFLICT OF INTEREST: We declare that we have no conflicts of interest.