ABSTRACT: In the modern lifestyle, people are prone to disease. The epidemiology study shows that the lung and colon cancer leading position in both the gender around the world at any group. As based on the traditional systems of medicine, the plants can be used for the discovery of new medicine. The aqueous and ethanol extract of Nigella sativa (N. sativa) seeds were evaluated for their genotoxicity using Ames test and cytotoxicity by MTT assay. Ames assay was conducted using strains of Salmonella typhimurium TA-100, whereas MTT assay was performed on human alveolar basal epithelial cells (A549) and human colon cancer cell line (HCT15). There is no mutagenic activity was obtained when treated with aqueous and ethanol extract of Nigella sativa seeds. But both the extracts were found to be cytotoxic against the tested cancer cell lines.  On the basis of the results, it was concluded that aqueous and ethanol extracts of Nigella sativa seeds possess cytotoxic potential but not mutagenic. It is suggested to explore the seeds further to evaluate its anticancer activity in the in-vivo model.

INTRODUCTION: Medicinal plants have been used for many centuries for treating various diseases in indigenous systems of medicine as well as folk medicines. Moreover, medicinal plants are considered to be safe as compared to allopathic medicines for disease preparation. Many researchers are focusing on medicinal plants for investing their medicinal properties, potential and mechanism of action, safety evaluation, and toxicological studies. Nigella sativa Linn is an annual herb has focused as an important medicinal plant due to their beneficial effects over the health.

It is used as traditional medicine for various diseases from an ancient period as a natural restorer 1. N. sativa seed essential oils also contain an essential compound that has antioxidant and anti-inflammatory effects 2, 3. Nigella sativa seeds are regarded as the stimulants for energy metabolism, and is also involved in recovery from tiredness and depression; as Islamic prophet stated, the black seed could heal all diseases except death. Due to the modern lifestyle, the mortality rate of cancer is increased. As the focus of this, many efforts have been implemented for the search of natural bioactive compound (or) chemo-preventive agent, which would reduce (or) cease the progression of cancer 4. Many studies explain the secondary metabolites of the plants has the ability to reduce the risks of cancer 5. Black seeds are also used in food like flavoring additive in the bread and pickles because it has a very low level of toxicity. In this study, we aimed to investigate in-vitro mutagenic activity and in-vitro cytotoxicity effect of N. sativa seeds extracts by Ames and MTT assay, which has been so far merely studied.

Collection of Plant Materials: The plant material of Nigella sativa seeds used in this study was collected from a local market, Tambaram. Authentication of plant material is carried out by prof. P. Jayaraman, Plant Anatomy Research Centre, Tambaram, Chennai 45. Following identi-fication of Voucher specimen, the plants were deposited in the herbarium. Authentication number: PARC/2017/3364. Fresh seeds of the plant were collected, cleaned, washed, shade dried and used for further studies

Sources of Fine Chemical: All chemicals including solvents used were of the highest purity and analytical grade purchased from Sigma Aldrich, USA and Karthick Enterprises Pvt. Ltd., Chennai – 45.

Preparation of the Extract:

Extraction: The dried seeds of Nigella sativa were pulverized to a fine powder and stored in airtight containers separately.

Preparation of Ethanol Extract: 30 g of dried seed powder were extracted with 250 ml of ethanol for 18 cycles using Soxhlet apparatus. After the running time the extract was concentrated in a rotary vacuum evaporator with temperature ranging from 30-40 ºC.

Preparation of Aqueous extract: 20 g of dried seed powder were defatted by soaking the seed with petroleum ether for one day & 250 ml of distilled water were added for extraction & kept for 18 h. After that it’s filtered with cheesecloth, the extract were poured in Petri plates and lyophilized to make it as powder then they are stored in airtight container.

Mutagenicity Assay (Ames test): The assays were performed using tester strain TA100 in both the presence and absence of S9 metabolic activator, positive controls were also evaluated. All test and controls items doses were evaluated using plates. Tester strains were exposed to the samples via the plate incorporation methodology described by Maron and Ames (1983). This methodology has been shown to detect a wide range of classes of chemical mutagens. In the plate incorporation methodology, the tester strain, samples, are combined in molten top agar, which is then overlaid onto a minimal bottom agar plate.

Tester Strain Density and Samples Preparation: The optical density of the overnight cultures were determined at 650 nm in a spectrometer and found to be within the range of 0.04 to 0.06, which demonstrates the cultures were in late exponential or early stationary phase with ≥ 109 cells / ml. The sample of the extracts was dissolved in DMSO. Dose formulations were prepared on the day of use. Dose formulation of varies concentrations of samples were prepared by serial dilution for the study.

Plating Procedures: These procedures were used in the dose range-finding and mutagenicity assays.  Each plate was labeled with the samples, test phase, tester strain, activation condition and dose. Treatments in both the presence and absence of S9 were performed by adding 100 µl tester strain and 100 µl test or control are added to 2.5 ml molten diluted top agar (maintained at 45 ± 2 ºC).  The mixtures were vortexes and overlaid onto the surface of bottom agar dishes.

Cytotoxicity Test for Plant Extracts: The determination of cell cytotoxicity of Nigella sativa seeds extracts on both the cell lines was carried out using colorimetric assay that measures the reduction of yellow-3-(4, 5Dimethylthiazol-2-yl)-2, 5-diphenyltetrazolium            Bromide) by mitochondrial succinate dehydrogenase enzyme described by Mosmann in 1983. The number of surviving cells and % of inhibition is directly proportional to the level of the formazan product created. The color can then be quantified using a simple colorimetric assay. The results can be read on a multi-well scanning spectrophotometer (ELISA reader) 8.

Mutagenic Potential: The number of revertant colonies when exposed to TA-100 strains  and treated with both  the seed extracts for assessing the mutagenic action  were present in Table 3,  in both the presence and absence of (-S9) metabolic activation.

The average revertant colonies per plate were treated with the control in both the presence and absence of metabolic activation system, which was found to be within the acceptable limits of the spontaneous revertant control values of the range 5-0.62 mg/ml of respective Salmonella strains TA 100. As there where a lack of papers regarding the mutagenic activity of N. sativa of aqueous and ethanol extracts, our study provide as evidence for the non-mutagenic effect of extracts. Among the several other works, 9 suggested that the anti-genotoxic effect of N. sativa seed extracts were investigated for a chromosomal mutation in bone marrow cells and spleen of male albino mice infected with schistosomiasis. The same result was found even in the in-vitro investigation when exposed to Thymoquinone or extracts. The paper reported by 10 & 11 that aqueous seed extracts of N. sativa have the ability to reduce the chromosome aberration in spermatocytes of the mouse when it was treated with CCl4. The protective effect of methanol extract of roots& shoots of Nigella sativa plant is used in assessing the anti-mutagenic potential on the bacterial strains of TA 1535 along with induced mutagen such as sodium azide 12 & also by bleomycin-induced cell damage in human lymphocytes has shown the result in decreasing the chromosome changes 13. In other study using Nigella sativa seed, oil & TQ reduced the tumor effect in female rats induced by DMBA treatment 14, 15. Our study result clearly exhibits that the number of revertant colonies of TA100 strains is not induced by both the extract of Nigella sativa seeds with or without the presence of metabolic activation of S9 mix as compared to the positive control. The result was expressed in mean value shows that no significant difference among the two extracts, hence the crude extracts of Nigella sativa seed of the plant are assessed to be as the non-mutagenic effect could to be due to the presence of the anti-mutagenic property.

Subsequently, the extracts were also analyzed for cytotoxicity effect over the cancer cell lines such as A549 and HCT15 at 48 h. In the previous study of Nigella sativa seeds has shown better cytotoxicity effect against many cancer cell lines such as Hela cells, cos31, MCF7, BG-1 cells 16 using the methanolic extract. The study reveals that the methanolic extract has the ability to down-regulate the expression of the anti-apoptotic gene and upregulate the expression of apoptotic genes, which suggest that the action is due to the presence of the active compounds. The in-vitro cytotoxicity studies of various species of Nigella sativa seed extract were assessed by neutral red uptake test; the investigation reveals that the extract has the ability to induce the anticancer properties by decreasing the cell proliferation, reducing the percentage of abnormalities over the chromosome 17 indicates that irrespective of any kind of Nigella species have anti-proliferative activity. A study reported that active component of the plant seed exerted as an antitumor effect by negative regulation of signal cascade mechanism in colorectal cancer 18.

As the previous study has revealed about the cytotoxic effect of Nigella sativa in several different types of cancer, where our in-vitro experimental results show that the low concentration of ethanol extract itself has good ability to triggers the anti-proliferative mechanism by stimulating the apoptosis process which brings the cell death (or) inhibit the cell growth as compared to aqueous extract on both lung cancer cell line and colon cancer cell line. The in-vitro Cytotoxicity Potential of crude extract of Nigella seed was calculated for IC50 value at 48 h & depicted in the graph. 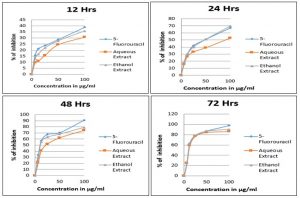 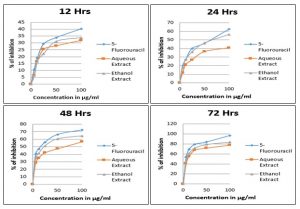 Graph 1 and 2 shows the dose-dependent changes in the viability of Cancer cell lines such as A549 and HCT15. The results clearly confirmed that the efficacy of the extracts does not only depend on the concentration of the dosage would also be based on the presence of bioactive compounds.

CONCLUSION: Hence our study rendered that the crude extracts of Nigella sativa seed has no mutagenic effect and also has the ability to inhibit the proliferation of cancer cells at dosage depended manner. Therefore, further investigation is required for the isolation and characterizations of bioactive compounds from crud seed extract.

CONFLICTS OF INTEREST: There are no conflicts of interest among all the authors with the publication of the manuscript.