ABSTRACT: The aim of this study was to investigate the physicochemical properties of amlodipine besylate tablets. Tablets containing 5 mg of amlodipine besylate were prepared using Generally Regarded as Safe (GRAS) excipients. Preformulation studies were carried out using Fourier Transform Infrared (FTIR) spectroscopy and High Performance Liquid Chromatography (HPLC). Dissolution studies were performed to assess biowaiver criteria for Biopharmaceutical Classification System (BCS) Class I drug. Both the test and reference products conformed to pharmacopoeial requirements for physical parameter of tablets. FTIR studies revealed that there was no interaction between drug and excipients used in the test product. The percentage of drug remaining in the samples, subjected to the accelerated condition, complied the range specified in the United States Pharmacopeia (USP) monograph of amlodipine besylate. The dissolution of both the products was found to be more than 85 % in pH 1.2 buffer at the interval of 15 min. However, in pH 4.5 and pH 6.8 buffer media, only test product released more than 85 % drug, whereas the reference product did not.  Mathematical analysis suggested that the release profiles obtained from the test and reference products in pH 4.5 and pH 6.8 buffer media were dissimilar. The finding of this study suggests that, under the tested conditions, the test product is better than the leading foreign brand available in Nepal. Prescribing pattern could be tailored based on the pharmaceutical quality of the product as well as cost of therapy to ensure better pharmacotherapy and patient compliance

Amlodipine is a calcium channel blocker belonging to the dihydropyridine group, used in hypertension and prophylaxis of chronic stable angina pectoris 5, 6. Various studies have shown a significant use and prescription of the amlodipine in cardiovascular disease.

Similarly, in another study it was reported that 67% of total drugs for hypertension was calcium channel blocker, 97.14% was amlodipine and the rest 2.86 % was nifedipine 3. Being the most popular drug among the calcium channel blocker, it needs a special surveillance that assures the high quality of drugs ultimately help to enhance the quality of life in developing countries.

Amlodipine is slowly and almost completely absorbed from the gastrointestinal tract 5, 6. Peak plasma concentrations are reached at 6-9 h of post dose 8, 9.  Amlodipine is extensively metabolized in the liver, but there is no significant pre-systemic or first pass metabolism and is slowly cleared with a terminal elimination half-life of 40-60 h 6, 9.Volume of distribution is large (21 L/kg), and there is a high degree of protein binding (98 %) 6. Because of less extensive and less variable first pass metabolism, its oral bioavailability is higher (60% - 80%), and more consistent7, 9.Thus, an oral dosage form is preferable.

BCS classification helps to ensure clinical performance of immediate release dosage form by in vitro dissolution rather than empirical in human in vivo studies 10. Amlodipine besylate is classified as BCS I drug 11.  BCS I drugs are those which are highly soluble and highly permeable 12.A drug substance is considered highly solublewhen the highest dose strength is soluble in 250 ml or less of aqueous media over the pH range of 1.2-6.8 11, 13. And a drug substance is considered to be highly permeablewhen the extent of absorption in humans is determined to be 90% or more of an administered dose based on a mass balance determination or in comparison to an intravenous reference dose 11.

Amlodipine is listed in World Health Organization (WHO) model list of essential medicines as antihypertensive medicine in 5 mg tablet 11.Amlodipine is slightly soluble in water, freely soluble in methanol, sparingly soluble in anhydrous ethanol, slightly soluble in 2-propanol 14. Nepal has marketing authorization for amlodipine as an immediate release dosage form in the strength 2.5 mg, 5 mg and 10 mg 15. It was found that the aqueous solubility of the amlodipine besylate in distilled water was 2.6 mg/ml 16. Therefore, the highest dose 10 mg amlodipine dissolves in less than 250 ml of different buffers pH 1.2, pH 4.5 and pH 6.8. Thus, amlodipine is a highly soluble drug according to WHO (D/S ratio ≤ 250 ml). Permeability of amlodipine besylate is classified “high” due to metabolic excretion in urine (90-95%) 17.

Most of pharmaceuticals dosage form is administered through the oral route, so it is important to know how these materials behave during their passage through the gastrointestinal tract. Small intestine is the major site of drug absorption and environment with the lumen of the gastrointestinal tract has a major effect on the rate and extent of drug absorption 18. According to the pH- partition hypothesis theory, the epithelial acts as a lipid barrier towards the drugs.

The unionized form of weakly acidic or basic drugs will pass the gastrointestinal epithelia. A weakly acidic drug is more likely to be absorbed from the stomach where it is unionized and weakly basic drug is to be absorbed from the intestine 18. The pKa of  amlodipne besylate is about 8.6 at 25oC 4 . Bases in the pKa range 5-10 are generally affected by changes in pH and hence their absorption is pH dependent 19. 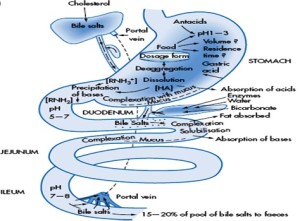 FIG. 1: REPRESENTATION OF THE PROCESSES OCCURING ALONG THE GI TRACT, AND OF THE FACTORS THAT MUST   BE TAKEN INTO ACCOUNT IN CONSIDERING DRUG ABSORPTION ( REPRODUCED FROM REF: 20)

The in vitro analysis in different pH medium provides better insight into the  absorption process. Therefore, the aim of this study was to investigate in vitro studies of amlodipine besylate tablet (test product) and comparison with foreign brand leader in Nepal (reference product).

Quantitative: Samples were prepared by mixing drug and excipients in presence of 25% moisture 21. The blend was stored in an oven at 100oC for 3 h 21. Samples were suitably diluted in the mobile phase, filtered through membrane filter (Ultipor®, 0.2 µm, Pall India, India) and analyzed in HPLC (LC2010 AHT, Shimadzu, Japan).

Briefly, the wavelength of the UV visible detector was 237 nm, the column temperature was maintained at 30oC, the flow rate was 1mL/min, and injection volume was 50 µL. The mobile phase consisted of methanol: acetonitrile: pH 3 buffer (7:3:10).

Where, Tt and Rt are percent drug dissolved at each time point for test and reference product, respectively.

Physical properties: Tablets require a certain amount of strength, or hardness and resistance to friability, to withstand mechanical shocks during handling in manufacture, packing, shipping and handling of retailers by patients. To avoid the problems that may arise during packaging transportation or crumble in the hands patients, hardness of 4 kg/cm2 and friability not more than 1% w/w considered suitable for handling the tablets 23.  Results from both the products complied (Table 1).

Compatibility studies: Preformulation is the first step in the rational formulation of an active pharmaceutical ingredient. It is an investigation of the physical-chemical properties of the drug substance, alone and in combination with excipients. Assessment of possible incompatibilities between the drug and different excipient is an important part of preformulation 24. FTIR spectra of amlodipine besylate showed characteristic amine stretching and bending at 3167.47 cm-1 and 1697.36 cm-1, respectively (Fig. 2, Fig. 3). The peak observed at 3167.47 cm-1 can be  attributed to N+ -H stretching mode and the sharp band at 1697cm-1 is due to C=O  stretching vibration 25. The peaks were unaltered in the samples containing binary mixtures of drug and excipients. This suggests that there is no incompatibility between drug and excipients. 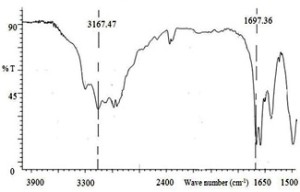 Other studies have also reported compatibility of amlodipine besylate with excipients like sodium starch glycolate, microcrystalline cellulose, colloidal silicon dioxide and camphor 26.  Furthermore, quantitative studies were performed in HPLC to assess interaction of amlodipine with the excipients, if any.

The amount of amlodipine besylate remaining in the samples subjected to accelerated condition, in presence of excipients, was determined. The result complied with the limit of assay specified in the United States Pharmacopeia (Table 2).

Hence, it can be inferred that all the excipients used to formulate tablet are compatible with amlodipine besylate. Drug-excipients compatibility study helps to formulate safe and efficient dosage form 21. Moreover, careful selection of excipient can help to achieve equivalence with the innovator product 27. 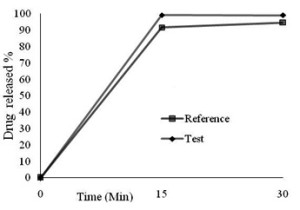 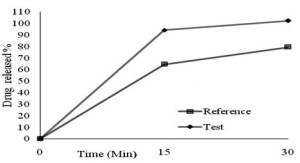 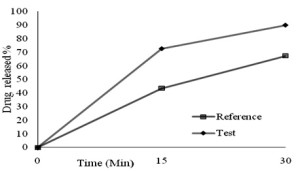 The test product released more than 85% drug at 30 min but the reference product did not. Solubility studies were conducted in the dissolution media. It was found that the solubility of amlodipine besylate decreased as the pH of medium increased from 1.2 to 6.8.

Furthermore, dissolution profile comparison was carried out using similarity factor (f2), the similarity factor was found to be 31.92 and 32.32 in pH 4.5 and pH 6.8 buffers, respectively. The dissolution profiles would have been similar for the values of f2 > 50 11. Thus, the dissolution profiles of test and reference products were dissimilar in pH 4.5 and pH6.8 buffer media. According to WHO, to meet the biowaiver condition for BCS Class Iactive pharmaceutical ingredient (API), more than 85 % dissolution of the labeled amount is required within 30 min in standard media at pH 1.2, 4.5 and 6.8 using the paddle apparatus at 75 rpm or the basket apparatus at 100 rpm 8.

If within 15 minutes, more than 85% of the API is released from the comparator and the multisource formulation under the above-mentioned conditions, the products will be considered very rapidly dissolving. In this case the products are deemed to be equivalent and a profile comparison is not required 11. Several comparison studies are reported for amlodipine products. In some cases, comparator product were found to be equivalent to the innovator product 17, whereas in the other not 27. Hence, careful selection of the excipients and the manufacturing process has profound importance in formulating dosage form for amlodipine besylate.