INTRODUCTION: The Immune System is the most complex biological systems in the body designed to protect the host from invading pathogens.

Several herbal preparations that can enhance the immune system are extensively used, as they are free from side effects. The effect of immuno-modulators can be classified into three, which are; stimulation, suppression, and restoration of the immune response 3-6.

Immunomodulators are used in clinical practices to stimulate and normalize an immune system activity. Immunomodulation using medicinal plants can provide an alternative to conventional chemotherapy for a variety of diseases particularly when host defense mechanism has to be activated under the conditions of the impaired immune response or when selective immunosuppression is desired in a situation like autoimmune disorders. The immunocorrective properties of immuno-modulators also can be successfully applied in the treatment of oncological diseases 7-9.

Flavonoids are bioactive secondary metabolites present in plants and are reported to have various pharmacological activities. Flavonoids are categorized, according to chemical structure, into flavonols, flavones, flavanones, isoflavones, catechins, anthocyanidins and chalcones 10, 11. Biological activities of flavonoids include antiviral, anti-allergic, antiplatelet, anti-inflammatory, antitumor, antithrombotic, hypolipidemic, and hypoglycemic activities 12-14. Flavonoids have been reported to have potent antioxidant activities. Flavonoid helps to reduce oxidative stress that has been linked to cancer, aging, atherosclerosis, ischemic injury, inflammation, and neuro-degenerative diseases (Parkinson’s and Alzheimer’s) 15-17. The role of flavonoids includes the inhibition of activation of pro-carcinogens, inhibition of proliferation of cancer cells, selective death of cancer cells by apoptosis, inhibition of metastasis and angiogenesis, activation of the immune response against cancer cells, modulation of the inflammatory cascade and the modulation of drug resistance 18-20.

Mimosa pudica (Family: Leguminosae) is a small or middle sizes tree about 1.5m in height with leaves are very sensitive, both pinnae and leaflets folding when touched. It is reported to contain alkaloid, glycoside, flavonoids, and tannins. All parts of the plant are considered to possess medicinal properties. The plant has anti-microbial, anti-convulsant, hyperglycemic, anti-venom, diuretic, anti-cancer, antidiabetic, antiulcer, anti-fertility and anti-histaminic activities 21-24. The medicinal plants have been the object of research in both systematic and advanced areas of plant sciences. Plant-derived natural products such as flavonoids, terpenoids, and steroids, etc. have received considerable attention in recent years due to their diverse medicinal benefits.

The aim and subject of many researchers is the discovery and development of isolating a new efficient, active, and less toxic molecule having medicinal benefits 25, 26. The present study was designed to isolate flavonoid from Mimosa pudica and evaluate its immunomodulatory and free radical scavenging activities.

Sample Preparation: The whole plant Mimosa pudica was thoroughly washed with water. They were chopped into small pieces, dried in the shade, grinded into powder form and stored in an airtight container.

Extraction and Isolation Procedure: The dried samples were Soxhlet extracted in 80% methanol (100ml/g dry weight) for 24hrs. The extracts were concentrated and reconcentrated in petroleum ether (40-60 ºC), ethyl ether and ethyl acetate. The ethyl acetate fractions, which contained the highest amount of flavonoids were subjected to Column Chromatography over silica gel (60-120 mesh). Gradient elution was conducted initially with n-hexane and gradually enriched with benzene, chloroform, ethyl ether, acetone, ethyl acetate, ethanol, methanol, and water successively in the order of increasing polarity 27. Fractions were collected and combined based on their TLC patterns. The fractions were then dried and analyzed for flavonoids.

Identification of Flavonoids by TLC: TLC was performed for the identification of flavonoids. The concentrated extracts were spotted on the lower side of the TLC plate (20 × 20 cm) precoated with silica gel G. the diameter of each spot was about 5mm. Then TLC was run one-dimensionally in the mobile phase solvent (ethyl acetate - methanol-water, 5:1:5, v/v/v) at room temperature 30. The plates were developed and visualized under UV light 31.

FT-IR Analysis: The column purified samples were mixed with 200 mg KBr (FT-IR grade) and pressed into a pellet. The sample pellet was placed into the sample holder, and FT-IR spectra were recorded (FT-IR Spectrometer-8400S Shimadzu).

DPPH Radical Scavenging Activity: Antioxidants react with 1, 1-Diphenyl-2-picrylhydrazyl (DPPH), a stable free radical which is reduced to DPPH‐H and as a consequence the absorbance is decreased from the DPPH radical to the DPPH‐H form. On accepting hydrogen from a corresponding donor, the solution loses the characteristic deep purple color, and the discoloration was proportional to the concentration and scavenging activity of the compound32.

The free radical scavenging capacity of the flavonoid isolated from Mimosa pudica was determined using DPPH. The reaction mixture contained 2.8 ml of 100µM DPPH dissolved in methanol and various concentrations of compounds in 0.2 ml distilled water. This mixture was incubated at room temperature for 30 min. The mixture was shaken, and absorbance was read at 517 nm. Ascorbic acid was used as standard and the percentage of the DPPH scavenging effect was expressed as the percentage of inhibition from the given formula:

Hydroxyl Radical Scavenging Assay: The hydroxyl radical scavenging assay is based on the ability of compounds to compete with salicylic acid for OH radicals. The reaction mixture contains 1 ml of 1.5 mM FeSO4, 0.7 ml of 6 mM hydrogen peroxide, 0.3 ml of 20 mM sodium salicylate, and 1 ml of various concentrations of the test compounds. The mixture was incubated for 1 h at 37 °C, and the absorbance of the hydroxylated salicylate complex was measured at 562 nm. Quercetin was taken as the standard for the assay. Lower absorbance of the reaction mixture indicated higher OH radical scavenging activity. All tests were performed in triplicates. Percentage scavenging of the OH radical was measured using the following equation, OH radical scavenging activity;

In-vitro Lymphocyte Proliferation Assay: Fresh human blood samples were layered on equal volumes of HisepTM LSM solution and centrifuged at 400 x g for 20 min at 18˚C. The quality of the separation depends upon the sharp interphase between the blood and the solution. Carefully discarded most of the plasma and platelet-containing supernatant above the interface band. The thin white middle lymphocyte layer was collected and washed with PBS twice by centrifugation at 250 × g for 10 min at 18 ºC.

The supernatant was discarded, and the cells were suspended in RPMI medium. Briefly, 1×104 cells ml-1 seeded in each well of a 24 well plate and extracted at different concentrations were added and kept for 72hrs incubation at 37 ºC in a humidified 5% CO2/95% air atmosphere.

After incubation, 20μl MTT (5mg/ml) was added to each well and incubation was continued for an additional 2 h. The insoluble formazan crystals formed were solubilized by the addition of 100μl MTT lysis buffer (SDS and dimethyl formamide) followed by an incubation of 4 h and the absorbance was measured at 570 nm using a microplate spectrophotometer 35, 36.

RESULTS AND DISCUSSION: The methanol extract of Mimosa pudica showed the presence of a large number of compounds, fractionated with petroleum ether (40-60 ºC), ethyl ether and ethyl acetate. The ethyl acetate fraction, which contained the highest amount of flavonoids, was subjected to Column Chromatography. Gradient elution was conducted using solvents according to the increasing order of their polarity. Fractions were collected and tested for flavonoids and were found to be positive in acetone: ethanol (2:1 ratio). The fraction was then dried and subjected to TLC, which confirmed the presence of a single compound Fig. 1.

Fourier Transform Infrared (FT-IR) Analysis: FT-IR was used for identifying the functional groups and thereby confirming the isolate from Mimosa pudica was flavonoid Fig. 4. The functional groups present in the analyte will make vibrations of specific wave numbers. Quercetin and Rutin were used as flavonoid standards Fig. 2 and 3. The spectral analysis is shown in Table 1.

FIG. 1: HPTLC PROFILE OF FLAVONOIDS ISOLATED FROM MIMOSA PUDICA [A] UNDER UV 366nm 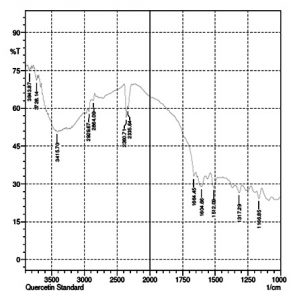 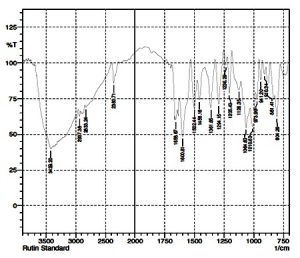 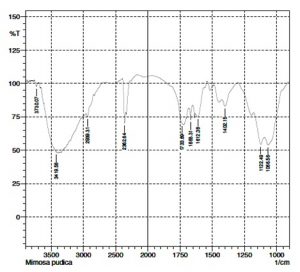 Hydroxyl Radical Scavenging Assay: This assay shows the abilities of the flavonoid isolated from Mimosa pudica and quercetin standard to scavenge the hydroxyl radical generated. The scavenging activity increased in a concentration-dependent manner. The radical scavenging activity of flavonoid isolated from Mimosa pudica is promising and may aid in the prevention or reduction of the progress of various oxidative stress-induced diseases, thereby benefiting human health. 100μg of quercetin equivalent activity was shown by 373.77μg of isolated flavonoid.

The percentage of radical scavenging property of the quercetin standard and the flavonoid isolated from Mimosa pudica are given in Fig. 6.

Lymphocyte Proliferative Activity in-vitro: The effect of the flavonoid isolated from Mimosa pudica at various concentrations on normal lymphocytes was evaluated using the MTT assay. The compound was found to enhance the in-vitro growth of lymphocytes. The percentage of the proliferation of lymphocytes at different concentrations was given in Fig. 7. The results of this experiment show that the flavonoid isolated from Mimosa pudica exhibited higher growth stimulations even at low concentrations, indicating its potential as an effective immu­nomodulatory compound.

The FT-IR fingerprinting provided the presence of OH stretched phenol, C=O aryl ketone and C---C aromatic ring in an isolate from Mimosa pudica which confirmed the isolate was a flavonoid. 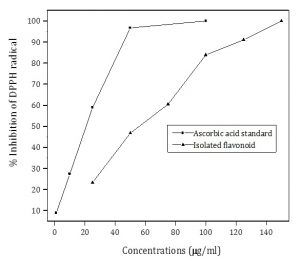 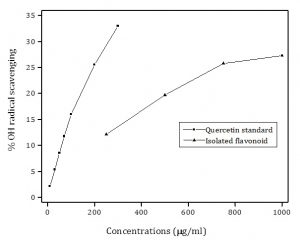 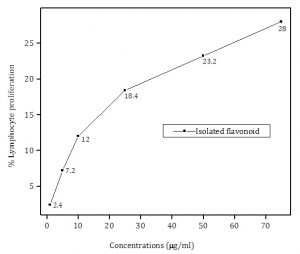 CONCLUSION: The isolated flavonoid exhibited strong DPPH radical scavenging activity, hydroxyl radical scavenging activity and potent stimulatory action on lymphocytes. So this isolated antioxidant ngredient can be therapeutically used as a natural immunomodulator in disorders of immunological origin. Further investigations are under progress to find out the effect the isolated flavonoid on other immune parameters such as macrophage activity and NK cell activity and to characterize and elucidate the structure of the active principle behind the activity.