ABSTRACT: The oil polluted soil has many hydrocarbons which can be degraded by microbes. These oil degrading microbes were isolated from the oil contaminated soil through plate and dilution technique. The oil contaminated soils were collected from the oil spilled places of Vaniyambadi and Ambur areas of Vellore District, Tamil nadu, India. Through the biochemical tests, the isolated bacterial strains were identified as Pseudomonas aeruginosa and Bacillus subtilis, the strains were further confirmed by starch hydrolysis test and by growing on cetrimide agar. It is screened for the biosurfactant production through drop collapsing test and Emulsification Index (E24) using diesel, petrol, kerosene and tween 20. Biosurfactants are amphiphilic compounds which reduce surface and interfacial tension. Here, Pseudomonas aeruginosa had shown higher biosurfactant activity, when compared to Bacillus subtilis

INTRODUCTION: Pollution of the soil system with the excess amount of chemicals or other substances resulted in the turndown of its fertility and which resulted in the poor yield of crops. The soil pollution is mainly caused by the accidental oil spills, agricultural activities, waste disposal and industrial outlets which mix with the soil and spoil the nature of the soil. This problem may be overcome by bioremediation. Bioremediation is the biological process to degrade or transform contaminants or impairments from the soil and water.

This process totally depends on microbes, which carry out their metabolic process and use this chemical contaminants as an energy source and converts contaminants into harmless or less toxic products 1.

Biosurfactants are amphiphilic compounds produced on living surfaces, mostly microbial cell surfaces or excreted extracellularly and contain hydrophobic and hydrophilic moieties that reduce surface tension and interfacial tension between individual molecules at the surface and interface respectively 2. Biosurfactants are grouped into six major classes based on the producing microorganism. These classes are glycolipids, phospholipids, polysaccharide lipid complexes, lipoprotein-lipopeptides, hydroxylated and cross linked fatty acids and the complete cell surface 3. Microorganisms exhibit emulsifying activity by producing biosurfactants and utilize contaminants as substrate and mineralize them into harmless products. The present study was focused on the isolation of oil degrading bacteria and screening the biosurfactant activity of the isolated bacterial strains.

The oil contaminated soil samples were collected from the oil spilled places of Vaniyambadi and Ambur areas of Vellore District, Tamil nadu, India.

Isolation of bacteria from the soil:

The emulsifying capacity was evaluated by an emulsification index E245. The emulsifying activity of the culture supernatant was estimated by adding 3ml of the supernatant and adding equal volume of oil of interest to the same tube. The tube was vortexed for 10 seconds to 1 minute. Then held stationary for 1 minute and then visually examined for turbidity of stable emulsion. Emulsifying power was measured by vortexing equal volumes of the centrifuged culture with the oil for 1 minute and determining the percentage of volume to settle for 24 hours and the height of the emulsion was measured6.

2µl of oil was added to each well of plate lid. The lid was equilibrated for 1 hour at room temperature and then 5 microliter of the culture supernatant was added to surface of oil. The shape of the drop on the oil surface was inspected after 1 minute. Biosurfactant producing cultures giving flat drops were scored as ‘positive’. Those cultures that have rounded drop were scored as ‘negative’ indicative of the lack of biosurfactant production7.

RESULTS AND DISCUSSION: Totally eight oil contaminated soil samples were collected from the oil spilled places like Petrol bunk, Diesel bunk, Mechanical shop and Coconut oil spills. From these samples, the bacterial strains were isolated by using nutrient agar plate and serial dilution techniques. Table 1 shows the presence (+) and Absence (-) of the growth of bacterial colonies (Fig. 1) from the different soil samples at various dilution conditions. Here, most of the all eight samples have shown better bacterial growth which can be further isolated and subcultured. 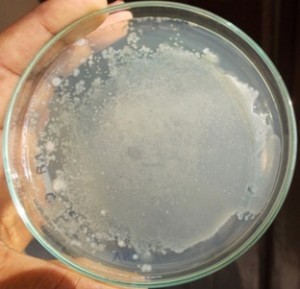 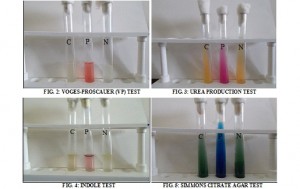 TABLE 2: BIOCHEMICAL TEST FOR THE IDENTIFICATION OF BACTERIAL ISOLATES

Biochemical test for the identification of bacterial isolates:

Confirmation test for the Bacterial isolates: 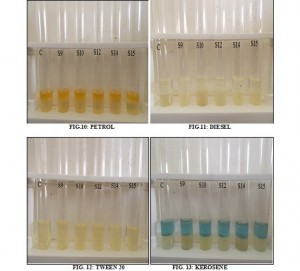 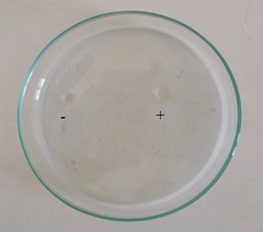 ACKNOWLEDGEMENT: The authors acknowledge the support of the Principal Dr. P.N. Sudha, Principal DKM College for Women (Autonomous) for providing necessary facilities in carry out this work.