INTRODUCTION: Pulsatile Drug Delivery System (PDDS) is an upcoming technique to combat patient’s non-compliance, achieve optimum drug target actions and it leads to availability of the right amount of drug on right site at right time using right dosage 1. These systems release their active moiety within a short period of time to produce its therapeutic action immediately after predetermined off release period 2. The pulsatile effect in this system is to release the active drug in a pulsation form after lag time in such a manner that rapid drug release pattern should follow lag time 3, 4.

Amlodipine (AMD) and Nifedipine (NFD) are the drugs used for the hypertensive treatments and belong to calcium channel blockers. Both drugs are included in the World Health Organization (WHO) essential medicine list. Both of the drugs are taken orally. Both drugs having a lesser biological life so that both drugs initially show higher percentage drug release in shorter duration.

Pulsatile drug delivery systems are prepared of both drugs to extend the drug release at a particular time.

The aim of this research works to develop and compare the in vitro drug release formulation of antihypertensive drugs of calcium channel blockers such as amlodipine and nifedipine 11-12. Pulsatile drug delivery systems of both drugs were prepared using different ratios of polymers, RPM and optimization. In vitro study is carried out of both drugs AMD and NFD formulation and selected formulation(s) in vitro study is compared.

Preparation of AMD and NFD microspheres:

Pulsatile AMD and NFD microspheres were prepared using solvent evaporation methods. Different concentration of blend of Carbopol 971p and Eudragit RS100 as polymer mixed in a distilled water as a continuous phase with continuous stirring until the polymers dissolved in the water. To this mixture a NFD solution corresponding to 100 mg mixed thoroughly and injected drop wise into the continuous phase. At the beginning dichloromethane (DCM) and methanol was mixed uniformly at room temperature. Then a blend of polymer and drug was dissolved in various proportions in the above solutions as given in Table 1. Nine different formulations were prepared. Similarly in the case of AMD loaded pulsatile microsphere, seven different formulations were prepared. Formulations A1 to A3 were prepared with different concentration of Eudragit S100 (Table 2). After finalizing the optimum concentration of polymer by various evaluation parameters of microspheres variation of resolution per minute were studied from A4 to A7 such as 750 to 1500 RPM.

TABLE 1: COMPOSITION OF NFD FORMULATIONS WITH VARIOUS RATIOS OF POLYMERS

TABLE 2: COMPOSITION OF AMD FORMULATIONS WITH VARIOUS RATIOS OF POLYMERS

In-vitro drug release studies of formulations of AMD and NFD: An in vitro dissolution profile of NFD of optimized formulation microsphere was studied by employing USP XXIV dissolution apparatus II paddle type (Model DS-8000 Lab India) of all the formulation N1 to N14 (Table 1). Microspheres equivalent to 2.5 mg nifedipine was placed into the basket of the dissolution apparatus. Acid buffer of pH 1.2 for the first 2 h and phosphate buffer of pH 6.8 was used for the next 10 h. A 900 mL of buffer medium, speed 100 rpm and temperature 37±0.5 °C were maintained. Five millilitres of the sample was withdrawn from the dissolution media at suitable time intervals and the same amount was replaced with fresh buffer. Samples were filtered through membrane filter 0.45 μm (Millipore).  The absorbance of the filtrate was determined spectrophotometrically at 238 nm against the respective buffer as blank. The amount of drug present in the filtrate was then determined from the calibration curve and cumulative percent of drug release was calculated and compared the final formulation with the conventional marketed dosage form and controlled release marketed formulation of nifedipine and same in vitro studies were carried for all formulations N1 to N14.

In vitro dissolution profiles of all formulations of AMD were performed employing USP 36-NF31 dissolution apparatus. Microspheres equivalent to 2.5 mg AMD of all formulations A1 to A7 as shown in Table 2 were placed into the dissolution apparatus containing 900 ml of acid buffer of pH 1.2 for first 2 h and 900 ml of phosphate buffer of pH 6.8 was used for the next 10 h and speed at 100 rpm and temperature 37±0.5 °C were maintained. Five millilitres of the sample was withdrawn from the dissolution media at particular time intervals and the same amount was replaced with fresh buffer. Samples were filtered through membrane filter 0.45μm (Millipore).  The absorbance of the filtrate was determined spectrophotometrically at 239 nm. Cumulative percent of drug release of the formulation were reported and all data were compared with formulation of NMD microspheres.

Kinetics of drug release of AMD and NFD: Model dependent methods are based on different mathematical functions, which describe the release profile. Once a suitable function has been selected, the release profiles are evaluated depending on the derived model parameters14-16. The results obtained from in vitro release studies were plotted in different model of data treatment as follows

Zero order kinetics: The zero order rates describe the systems where the drug release rate is independent of its concentration. A zero-order release would be predicted by the following equation;

First order kinetics: The first order describes the release from system where release rate is concentration dependent. A first-order release would be predicted by the following equation

Where C is the amount of drug released in time t, C0 is the initial concentration of drug and K is the first order rate constant.

Higuchi’s Model: The first example of a mathematical model aimed to describe drug release from a matrix system was proposed by Huguchi in 1961. Initially conceived for planar systems, it was then extended to different geometrics and porous systems. This model is based on the hypotheses that (i) initial drug concentration in the matrix is much higher than drug solubility; (ii) drug diffusion takes place only in one dimension (edge effect must be negligible), (iii) drug particles are much smaller than system thickness, (iv) matrix swelling and dissolution are negligible, (v) drug diffusivity is constant, and (vi) perfect sink conditions are always attained in the release environment. Higuchi was the first to derive an equation to describe the release of a drug from an insoluble matrix as the square root of a time-dependent process based on Fickian diffusion. Simplified Higuchi equation is following;

Where, Qt is the amount of drug released in time t and KH is the release rate constant for the Higuchi model.

Korsmeyer and Peppas Model: The release rates from controlled release polymeric matrices can be described by the equation proposed by Korsmeyer et al.

Where, Q is the percentage of drug released at time‘t’, K is a kinetic constant incorporating structural and geometric characteristics of the tablets and ‘n’ is the diffusional exponent indicative of the release mechanism.

In the case of release profile of AMD indicated that after 1 h 3.94% amount of AMD was released from the microsphere which was very less as compared to NFD formulation and after 4 h, 19.71% amount of AMD (A5) released from the microsphere. Lag time in the case of AMD is 6 h to 8 h in which drug released was 90.21% and after 12 h, it was 94.92%. Hence polymer coating and type decides the lag time of the formulation. 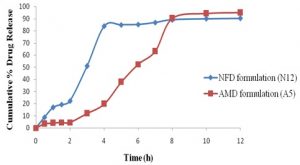 FIG. 1: COMPARISON OF IN-VITRO DRUG RELEASE OF OPTIMUM FORMULATIONS OF AMD AND NFD

Pulsatile microspheres have been investigated for improving AMD and NFD release after a particular lag time which initially release slightly and then maximum while marketed products do vice-versa. AMD and NFD are recommended as first line for patients with high blood pressure. Those patients who are suffering from early morning blood pressure problem have problem to take a medicament, so for such patient these type of drug delivery is very beneficial. Drug release showed a pulsatile effect of the optimum formulation of NFD (N12) and compared with the effect of the optimum formulation of AMD (A5). The pulsatile release effect were increasing at a particular lag time and later shows First order model kinetics in the case of NFD (N12) as comparison with AMD (A5) pulsatile release effect shows Zero order kinetics i.e. time independent.

CONCLUSION: The present investigation from the research concluded that microsphere formulation NFD (N12) with blend of Carbopol 971P and Eudragit RS100 showed release at particular lag time and showed first order kinetics as compared to microsphere formulation AMD (A5) with the blend of Eudragit S100 and 0.2% PVA showed released at a particular lag time and showed zero order kinetics. Both microspheres formulations of AMD and NFD showed pulsatile effect and time controlled properties. Thus, the result form this study of microspheres provided a potential pulsatile drug delivery effect for the delivery of nifedipine and amlodipine in the treatment of hypertension.

CONFLICT OF INTEREST: No conflict of interest associated with this work.