ABSTRACT:The main objective of study was to formulate SEDDS of Spironolactone in order to achieve a better dissolution rate which would further help in enhancing oral bioavailability. SEDDS are isotropic mixtures of oils and surfactants, sometimes containing cosolvents.  The present research work describes a Self Emulsifying Drug Delivery System (SEDDS) of Spironolactone using oils (Arachise oil, Oleic Acid, Castor oil, Soyabean Oil, Neobee M5, Migloyol, Capmul), surfactants (Tween-80, Cremophor RH40,Cremophor EL) and adsorbents (Aerosil-200,Avicel PH101,Lactose, Dextrose, Mannitol and Talc). In case of SEEDS of Spironolactone, the release rates of all oils were very rapid in Avicel  PH101(above 82%) because it has the best flow property among the other  absorbents. It Self Emulsifying Drug Delivery System observed that the release pattern from Arachis oil (92.95%), Oleic acid (90.21%) and Castor oil (97.54%) were better in comparison to other oils. Besides, it can be comprehend that the release rate of the three oils were very rapid in Tween-80(above 85%) because it has the best emulsifying property than Cremophor RH40 and Cremophor EL.  Besides the solubility of Spironolactone in various oils was determined to identify the oil phase of SEDDS. Various surfactants and co-surfactants were screened for their ability to emulsify the selected oil. The formulation was found to show a significant improvement in terms of the drug release with complete release of drug within 60 minutes. Thus, Self microemulsifying formulation of Spironolactone was successfully developed.

INTRODUCTION: Self-emulsifying drug delivery systems (SEDDSs) have gained exposure for their ability to increase solubility and bioavailability of poorly soluble drugs. SEDDSs are isotropic mixtures of oils and surfactants, sometimes containing co-solvents, and can be used for the design of formulations in order to improve the oral absorption of highly lipophilic compounds 1. SEDDSs emulsify spontaneously to produce fine oil-in-water emulsions when introduced into an aqueous phase under gentle agitation SEDDS can be orally administered in soft or hard gelatin capsules and form fine, relatively stable oil-in-water emulsions upon aqueous dilution.2 In recent years, the formulation of poorly soluble compounds presented interesting challenges for formulation scientists in the pharmaceutical industry. Up to 40% of new chemical entities discovered by the pharmaceutical industry are poorly soluble or lipophilic compounds, which leads to poor oral bioavailability, high intra and inter subject variability, and lack of dose proportionality.

In the oral formulation of such compounds, a number of attempts- such as decreasing particle size, use of wetting agents, co-precipitation, and preparation of solid dispersions have been made to modify the dissolution profile and thereby improve the absorption rate. Recently, much attention has focused on lipid-based formulations to improve the bioavailability of poorly water soluble drugs. Among many such delivery options, like incorporation of drugs in oils, surfactant dispersion, emulsions and liposomes, one of the most popular approaches are the self-emulsifying drug delivery systems (SEDDSs).

Self-emulsifying formulations spread readily in the gastrointestinal (GI) tract, and the digestive motility of the stomach and the intestine provide the agitation necessary for self emulsification. These systems advantageously present the drug in dissolved form and the small droplet size provides a large interfacial area for the drug absorption. When compared with emulsions, which are sensitive and metastable dispersed forms, SEDDSs are physically stable formulations that are easy to manufacture. Thus, for lipophilic drug compounds that exhibit dissolution rate limited absorption, these systems may offer an improvement in the rate and extent of absorption and result in more reproducible blood time profiles 3-4.

Recently, due to good and reliable result, there is a great emphasis on self-emulsifying drug delivery systems (SEDDS) to improve the oral bioavailability of lipophilic drugs 5-6.

Self-emulsifications is a phenomenon which has been exploited commercially for many years in formulations of emulsifiable concentrates of herbicides and pesticides 7. The most popular approach is the incorporation of the active lipophilic component into inert lipid vehicles 8, surfactant dispersions, self-emulsifying formulations 9, emulsions 10  and liposome 11 with every formulation approach having its special advantages and limitations.

There has been growing interest in the use of lipidic excipients in formulations and, in self-emulsifying lipid formulations (SELFs) because of their ability to solubilize poorly water soluble 'lipophilic' drugs and overcome the problem of poor drug absorption and bioavailability 12. The lipophillic (poorly water soluble) drugs such as Nifedipine, Griseofulvin, Cyclosporin, Digoxin, Itraconazole Carbamazepine, Piroxicam, Fluconazole, Indomethacin, Steroids, Ibuprofen, Diazepam, Finasteroids, Difunisal, etc. are formulated in SEDDS to improve efficacy and safety 13.

Preparation of Spirinolactone SEDDS: Spironolactone SEDDS were prepared by using drug (Spironolactone), oils (Arachise Oil, Oleic Acid, Castor Oil, Soyabean Oil, Neobee M-5, Migloyol, Capmul), surfactants (Tween-80, Cremophor RH40, Cremophor EL) and adsorbent (Aerosil-200, Avicel PH101, Lactose, Dextrose, Mannitol and Talc) according to table 1, 2 and 3 with proper stirring to make sure a homogenous mixing of the drug in the preparation. Then 1 gm of the formulation from each was placed into a clean 50 ml beaker with proper labeling and adsorbent was added with continuous stirring until free flowing powder formed. Formulations were kept in desiccators until the dissolution started.

Flow chart for the process of preparation of SEDDS: 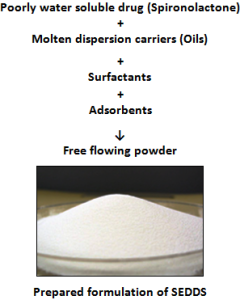 TABLE 1: FORMULATION FOR THE PREPARATION OF SPIRONOLACTONE SEDDS WITH SURFACTANT AND ADSORBENT USING DIFFERENT OILS

Solubility Studies: The solubility of poorly soluble drug was study in different oils, surfactants and co-surfactants. The solubility of Spironolactone was determined by adding an excess amount of drug in 2 ml of different oils (Castor oil, Soya bean oil, Arachise oil, Capmul oil, Micloyol oil, Oleic acid and Neobee M 5) and surfactants (Tween-20, Tween-40, Tween-80, Span-60, Span-80, PEG-400 and PEG-600) in 5 ml stopper vials and mixed using a vortex mixer (Remi, India).Vials were stirred in a water bath at 40°C for 24 h and allowed to reach equilibrium at 30°C for 72 h. The equilibrated samples were removed from shaker and centrifuged at 3000 rpm for 10 minutes. The supernatant was taken and filtered through a 0.45 μm membrane filter. The concentration of Spironolactone was determined in oils using UV Spectrophotometer (Shimadzu, Tokyo, Japan) at 238 nm 14-15. The experiment was repeated in twice and the results represent the mean value (mg/mL±SD) in table 4 and 5.

Percent (%) Release study of Spironolactone SEEDS with different adsorbents using Different Oils: According to table 6, it can be said that the release rate of all oils were very rapid in Avicel PH101 because it has the best flow property among the other adsorbents. Whereas the other adsorbents like Aerosil-200, Lactose, Dextrose, Mannitol and Talc show slow release rate.

Avicel PH101 can be used in the formulation of poorly water-soluble drug as it causes the rapid release of Spironolactone. This test was performed to choose an adsorbent for further use in some other formulations. It was observed from figure 1 and 2 that the release pattern from Castor Oil,  Arachise Oil and Oleic Acid were better in comparison to other oils.

Percent (%) Release of Spironolactone SEDDS with different oils using different surfactants: From figure 3, it can be figure out that the release rate of the three oils was very rapid in Tween-80 because it has the best emulsifying property among the other surfactants. Whereas the other surfactants like Cremophor RH40 and Cremophor EL showed slow release rate. Tween -80 can be used in the formulation of poorly water-soluble drug as it has the solubilizing property for a variety of substances, including essential oils and oil-soluble vitamins, and as a wetting agent in the formulation of oral and parenteral suspensions. This test was performed to choose a surfactant for further use in some other formulations. 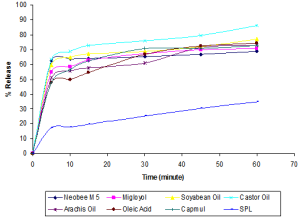 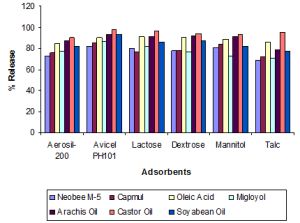 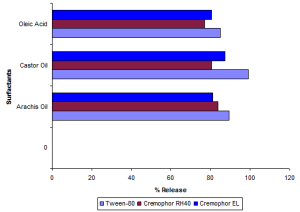 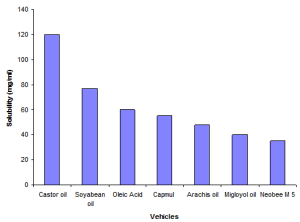 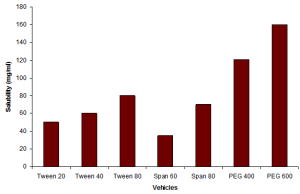 ACKNOWLEDGEMENT: The authors are thankful to Incepta Pharmaceutical Ltd., for providing active drug Spironolactone as gift sample for the research work. The authors would also like to acknowledge the support received from the Pharmaceutics Research Laboratory of the Department of Pharmacy, University of Asia Pacific.