IN VIVO AND IN VITRO DETERMINATION OF TOTAL PHENOLS, ASCORBIC ACID CONTENT AND ANTIOXIDANT ACTIVITY IN PLUCHEA LANCEOLATA OLIVER & HIERN.

in vivo and in vitro DETERMINATION Of TOTAL PHENOLS, Ascorbic acid Content and ANTIOXIDANT ACTIVITy in Pluchea lanceolata Oliver & Hiern.

ABSTRACT: The present investigation deals with the determination of in vitro antioxidant activity as well as the phenols and ascorbic acid content in in vivo (leaf, stem, root) and in vitro (unorganised static callus cultures) plant parts of Pluchea lanceolata. Unorganised static callus cultures (eighteen months old) were grown on MS medium supplemented with NAA (1.0 mg/l) and BAP (0.5 mg/l) using leaf explants. Antioxidant activity was analysed in terms of DPPH radical scavenging assay, total phenolic contents were estimated by folin ciocalteau phenol reagent method and ascorbic acid (vitamin c) was analysed by 2, 4-dichlorophenol indo-phenol dye method. Antioxidant potential was found to be maximum (93.55 %) in leaf parts and minimum in stem (54.74 %). Lower IC50 value indicates high antioxidant activity which was maximum in stem (665.90±0.23) and minimum in leaf (123.37±0.16). Total phenols and ascorbic acid were also higher in in vivo tissues (leaf) as compared to in vitro tissues. In the present study excellent DPPH radical scavenging activity (RSA) was found in all extracts of plant. Antioxidant activity has been associated with development of reducing power. These primary findings showed that P. lanceolata possesses higher levels of phenolic and ascorbic acid constituents that are responsible for antioxidant activity.

INTRODUCTION: Plant extract or plant derived antioxidant compounds improve human body’s antioxidant defence and are preferable over synthetic because of their safety. Therefore, in recent times research is directed towards discovering plants that protect against various kinds of ailments with antioxidant potential.1, 2 Determination of the natural antioxidant compounds of plant extracts may help to develop new drug moiety for therapy.  Pluchea lanceolata Oliver & Hiern. is an important xerophytic herb belonging to family Asteraceae and commonly known as Rasna.

All parts of the plant are extensively used in indigenous system of medicine. It has anti-inflammatory and analgesic activity and is greatly used in rheumatoid arthritis, neurological diseases, sciatica, edema, bronchitis, dyspepsia, cough, psoriasis and piles.3, 4, 5, 6 The plant contains different secondary metabolites viz. Flavonoids (quercetin, isorhamnetin, daidzein), triterpenes, sitosterols, taraxosterols and pluchine that are responsible for its anti-inflammatory and analgesic properties7, 8, 9, 10. But so far, there are no systematic reports made on the determination of antioxidant activity as well as total phenols and ascorbic acid content in in vivo and in vitro plant parts of Pluchea lanceolata.

The plant parts of Pluchea lanceolata were collected from the forest regions of Jaipur and was verified by herbarium of the Department of Botany, University of Rajasthan, Jaipur. A voucher specimen was deposited in the herbarium of the Department. Unorganised callus cultures (eighteen months old) were grown on MS medium11 consisting of basal salts and vitamins with 3% (w/v) sucrose and 0.8% agar with NAA (1.0 mg/l) and BAP (0.5 mg/l) using leaf explants 12. These cultures were allowed to grow upto their maximum growth age (6 weeks) 13.

Extraction and Estimation of Antioxidant Activity:

Each plant samples (5g) in vivo (leaf, stem, root) and in vitro (unorganised callus tissues) was soxhlet extracted in 80% methanol at 60 0C for 24hours. Then the extracts were used to prepare multiple dilutions from 100μg/ml to 800μg/ml concentrations with methanol. To1ml each of the test samples (plant extracts), standard (ascorbic acid) and blank (methanol), 3 ml of 0.004% methanolic DPPH solution was added. Then all the samples were incubated for 30 min at room temperature.

Absorbances of the preparations were taken at 517 nm using UV spectrophotometer. The results were expressed as IC50 values. The discolouration of sample was presented in terms of percent inhibition of radical scavenging ability that was calculated using following formula.

Ascorbic acid was used as positive control. Percent inhibition of free radical was plotted against the sample concentration in order to calculate the IC50 value. It is defined as the amount of sample necessary to decrease the absorbance of DPPH by 50% that was calculated from the curve. Radical scavenging activity index of samples were then calculated using following formula:

Each of the fresh samples of the plant weighing 500 mg (leaf, stem, root, callus) were homogenized and centrifuged with 10 ml of 80% ethanol. The filtrate was used as alcoholic extract for estimation of total phenols. To measure the total phenolic contents15 one ml of folin ciocalteau phenol reagent (diluted with equal volume of distilled water before use) was added to 1 ml of alcoholic extract in a test tube followed by 2 ml of 20 % sodium carbonate solution. The mixture was heated in a boiling water bath for one minute. The blue colour obtained was diluted with 25 ml of distilled water and the optical density was read at 725 nm in spectrophotometer against 80 % ethanol used as blank. Total phenols were calculated from a standard curve prepared from different concentrations of tannic acid. Total phenols were expressed as mg/g fresh weight of tissues.

Each of the plant tissue samples were dried, powdered, weighed and homogenized separately in  mortar and pestle in 2% Meta Phosphoric Acid (MPA) (100 mg tissue sample in 1 ml of MPA) and allowed to macerate for one hr then centrifuged separately at low speed (2500 rpm) for fifteen minutes. The residues were discarded and the supernatants were used for the estimation of ascorbic acid 16.

Standard solutions of ascorbic acid of various concentrations were prepared (0.1 to 0.9 mg/ml) in 2% MPA. Each of the 1.0 ml of standard as well as tested samples were mixed with 2.0 ml of 5% MPA and kept for 30 minutes without stirring at room temperature. To each of these 5.0 ml of n-amyl alcohol and 3.2 ml dye (5 mg in 100 ml, 2,4-dichlorophenol indo-phenol ) were added and air bubbled through lower layer. Each of the test tubes was stoppered tightly. The mixture was shaken vigorously and the upper layer was used for the estimation of ascorbic acid. Then absorbance of the preparations were taken at 546 nm by a UV spectrophotometer. The amount of free endogenous ascorbic acid in the test samples was calculated by comparing with that of the standard curve, in mg/100 g dry weight.

All the plant parts were found to have good antioxidant potential when compared to ascorbic acid standard as shown in Fig 1. Antioxidant activities of the leaf (93.55%) and callus (92.76%) extract was found to be higher than root (90.6%) and stem (54.74%) by the DPPH assay (Fig 1). Lower IC50 value indicates high antioxidant activity. Fig 2 revealed that the IC50 value for the leaf extract was minimum (123.37±0.16) and stem showed highest IC50 value (665.90±0.23) and least antioxidant potential. From these IC50 values, activity indices of all the tested samples against ascorbic acid were analysed (Fig 3).

The activity index of leaf part was found to be highest among tested plant parts (2.09±0.28) and it was lowest in stem parts (0.387±0.35) as shown in Fig 3. From the analysis of percentage inhibition of free radicals it was found that the antioxidant potentials of leaf, root and callus parts of were higher than ascorbic acid standard and thus their activity indices were above one. 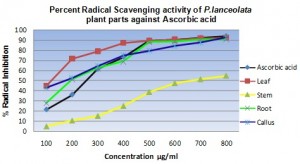 FIG 1: DPPH RADICAL SCAVENGING ACTIVITY OF METHANOLIC EXTRACTS OF PLUCHEA.LANCEOLATA IN VIVO AND IN VITRO 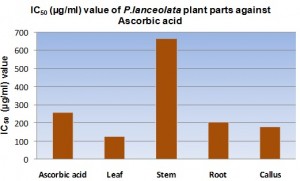 FIG 2: IC50 VALUES OF P. LANCEOLATA AGAINST ASCORBIC ACID IN VIVO AND IN VITRO 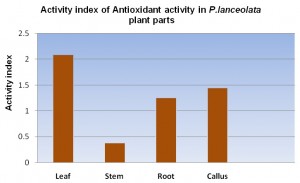 FIG 3: ACTIVITY INDEX OF ANTIOXIDANT ACTIVITY IN P. LANCEOLATA IN VIVO AND IN VITRO 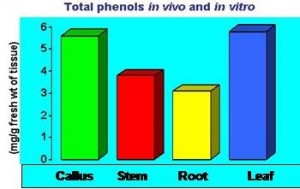 FIG 4: ESTIMATION OF TOTAL PHENOLS IN P. LANCEOLATA IN VIVO AND IN VITRO

The endogenous ascorbic acid contents were also found to be higher in leaf as compared to other in vitro and in vivo plant parts. Amount of ascorbic acid was more in leaf tissues followed by roots, callus and stem as shown in Fig 5. 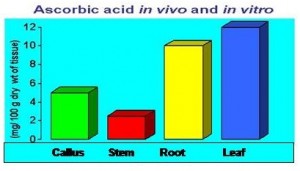 FIG 5: ESTIMATION OF ASCORBIC ACID IN P. LANCEOLATA IN VIVO AND IN VITRO

CONCLUSION: The free radical scavenging ability of P. lanceolata was found to be excellent due to the presence of high level of antioxidants such as phenols and ascorbic acid (Vitamin C). The outcome of the present study is promising that this plant can be a potent material for protecting the human body from oxidative stress, inflammation, cancer, infections and acts as immune modulators in traditional medicine. Further investigation on the isolation and identification of antioxidant component(s) in the plant may lead to chemical entities with potential for clinical use.