ABSTRACT: Moringa oleifera is an important food commodity with enormous attention as the 'natural nutrition of the tropics. Leaves of this plant are traditionally known for or reported to have various biological activities, including hypocholesterolemic agent, antidiabetic, gastric ulcers, antitumor and hypotensive agent. This study was designed to assess the toxicological and histopathological effects of ethanolic leaves extracts of Moringa oleifera in Ehrlich ascites carcinoma (EAC) induced Swiss albino mice. Material and Methods: Toxicity evaluation was carried out according to the OECD guidelines and histopathological assessment of the liver tissues was made using hematoxylin and eosin staining. Results: It indicated that ethanolic extracts did not induce any toxicity up to 1600 mg/kg body weight doses. Examination of ascitic fluid revealed that ethanol extract at 500 mg/kg dose induced degenerative changes and mild signs of apoptosis. Gross pathology of the liver indicated that the extracts did not alter the normal cytoarchitecture of these tissues. Discussion and Conclusion: Findings from this study interpret that ELMO extracts can be used as a complementary therapeutic in the EAC.

INTRODUCTION: Cancer or malignant neoplasm is a class of diseases in which a group of cells displays uncontrolled growth, invasion and even sometimes metastasis 1. It continues as a serious public health problem throughout the world as the most feared diagnosis. It is the second leading cause of human death after cardiovascular diseases in developing as well as in developed countries 2.

Phytochemicals have long‑term health benefits; however, they are used in parallel to cancer therapy because cancer therapy can cause significant damage to tumor cells within a short period of time 3. There is an increasing interest in exploring indigenous plants to identify their possible therapeutic aspects, most probably due to their presumed safety, cost‑effectiveness, and easy availability 4.

Moringa oleifera is an important food commodity with enormous attention as the 'natural nutrition of the tropics. The leaves, fruit, flowers of this tree are used as a highly nutritive vegetable in many countries, particularly in India, Pakistan, Philippines, Hawaii and many parts of Africa 5 Leaves of this plant are traditionally known for or reported to have various biological activities, including hypocholesterolemic agent 6, regulation of thyroid hormone status 7, antidiabetic 8, gastric ulcers 9, antitumor 10 and hypotensive agent 11. Active oxygen species and free radicals play an important role in the pathogenesis of several human diseases, such as rheumatoid arthritis, cardiovascular diseases, and cancer. Any natural compound with antioxidant properties may help in maintaining health when continuously taken as components of dietary foods, spices, or drugs 12. Ehrlich’s ascites carcinoma (EAC) originally appeared as spontaneous breast cancer in female mouse and is being used as a subcutaneously transplantable tumor in the mouse system 13. EAC is an undifferentiated carcinoma, which is hyperdiploid in nature. It has the characteristics of rapid proliferation, high transplantation, short life span and 100% malignancy with no tumor‑specific transplantation antigen 14. Due to the resemblance of EAC and human tumors which are more sensitive to chemotherapy, it can be used as an efficient model in in-vivo anti-cancer studies. The present study aimed to in-vivo anti-cancer and histopathology studies of ethanolic leaves extracts of Moringa oleifera Lam. (ELMO) against Ehrlich ascites carcinoma (EAC) in albino mice.

Plant Material: Moringa oleifera Lam leaves were collected in January 2019 from Anantapur district, Andhra Pradesh, India. The leaves were dried under the shade with occasional shifting, powdered with a mechanical grinder, and stored in an air-tight container. The Moringa oleifera plant authenticated by botany professor (specimen no.130/M) in Sri Krishna Devaraya University, Anantapur.

Preparation of the Extract: 150g of the dry leaves powder of Moringa oleifera Lam was soaked in 90% ethanol and 10% distilled water for 24 hours in a percolator. After 24 hours, it was allowed to percolate slowly and the extract was collected in Petri dishes. The extract was concentrated in a vacuum using a rotary flash evaporator (40°C). There was a net yield of 23.00 g of the concentrated extract (17.80 w/w %).

Animals Used: Swiss albino mice, weighing 20-25g, male, were procured from the animal house of the Basaveshwara Medical College and Hospital, Chitradurga, Karnataka, India. The total number of animals used in all procedures was 116. All the animals were kept in standard polypropylene cages under standard conditions: temperature (24±1°C), relative humidity (40-45%) and a 12:12 light: dark cycle. The animals were fed a standard rodent diet (Amruth Rat Feed, manufactured and supplied by Pranav Agro Industries, Pune, India) and water was given ad labium. The animals were allowed to acclimatize to laboratory conditions 48 h before the start of the experiment. The institutional animal ethical committee duly approves the experimental protocol (Reg. no.1284/ac/09/CPCSEA).

Ehrlich ascites carcinoma cells were collected from donor male Swiss albino mice of 20-25 g body weight and suspended in sterile saline (0.9% NaCl, Almotaheda pharma). A fixed number of viable cells (usually 3× 106cells/mice) were implanted in the peritoneal cavity of each recipient mouse 15. Every 0.5 ml of Ehrlich ascites carcinoma was withdrawn by a sterile disposable syringe, diluted with 4.5ml of normal saline (0.9% Nacl), and 0.2ml of diluted EAC was injected i.p in each recipient mouse. The tumor cells were allowed to multiply within the peritoneal cavity.

Acute Toxicity Study (LD50): Healthy albino mice (25-30 g) were used in the acute toxicity study. The acute toxicity study was evaluated as per Organization of Economic Co-operation and Development (OECD) guidelines 423 (Acute toxic class method). The mice were fasted overnight and provided only water, after which the ethanolic extract of Moringa oleifera was administered by gastric intubation orally at a dose of 50mg/kg body wt. After this single administration, the animals were observed for signs of possible toxicity every 30 min after dosing for the first 24 h and thereafter for 14 days. All animals were weighed daily and monitored for any signs of toxicity and for mortality for up to 14 days. Additional signs of toxicity such as changes in body weight, skin and fur, eyes and mucus membranes, respiratory system, circulatory system, ANS and CNS, somatomotor activity, and behavior pattern were also recorded. If mortality was observed in 2 to 3 animals in 14 days, then the dose was said to be toxic. But if mortality in one animal was observed, then the same dose was repeated again for confirmation. However, if mortality was not observed, the procedure was repeated for further higher doses such as 100, 200, 400, 800, and 1600mg/kg body wt. Toxic symptoms are observed for 72 hrs, including behavioral changes, locomotion, convulsions, and mortality 16.

Pathology of the Ascitic Tumor: Gross pathology of the ascitic tumor was carried out according to the standard protocol 17. A small amount of the ascitic fluid was withdrawn aseptically from the peritoneum of the mice on the 15th day of tumor inoculation. A drop of the fluid was placed on the slide and made into a smear. The slide was kept aside, and the smear was fixed with methanol for ½ h. Then, a few drops of hematoxylin and eosin reagent were added to the smear. The slide was allowed to stain for 3 min and was washed with an excess of distilled water. Then, the slide was allowed to stand for ½ h. It was fixed with xylene and examined under the microscope at 10X and 40 X magnifications. Photomicrographs were recorded focusing the appropriate regions in the smear.

Histopathology of the Liver: At the end of the treatment, both control and experimental mice were sacrificed by administering euthanizing agent thiopental sodium (300 mg/kg). The liver tissues from all groups were collected, fixed in 10% formalin in saline, dehydrated in ascending grades of ethyl alcohol, cleared in xylol and mounted in molten paraffin at 58 °C–62°C. About 5 µ sections were obtained, stained with Harris hematoxylin and eosin, and evaluated for any histopathological changes under a bright field microscope 18. Five slides were screened from each animal. Liver sections were evaluated for pathological changes such as cellular infiltration, nuclear abnormalities, and central vein dilatation.

Acute Toxicity Study: In acute toxicity studies, no mortality or morbidity was observed in animals throughout the 14 days following the single oral administration of the extract Table 1. The animals did not show any changes in general appearance during the observation period. Morphological characteristics such as fur, skin, eyes and nose appeared normal. No tremors, convulsion, salivation, diarrhea, lethargy or unusual behaviors such as self-mutilation, walking backward, and so forth were observed. Gait and posture, reactivity to handling or sensory stimuli, and grip strength were also normal. Thus, no overt signs of acute toxicity or death were observed in mice treated with an ethanolic extract of Moringa oleifera up to the dose of 1600 mg/kg. 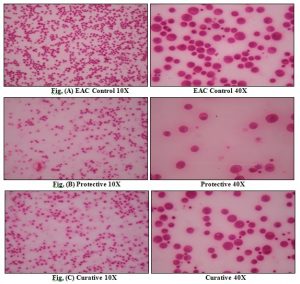 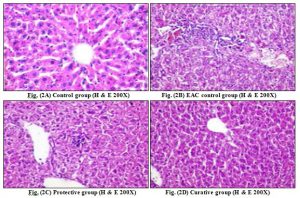 FIG. 2: HISTOPATHOLOGICAL STUDY OF THE LIVER IN DIFFERENT GROUPS OF ELMO-TREATED MICE

DISCUSSION: According to the WHO study, the dependence on traditional medicines is considered to be 80% by the remote area population 19. Medicinal plants as drugs are gaining popularity in developing countries because of their safety and efficacy. Phytochemicals isolated from such plants are considered nontoxic without causing undesirable health effects 20. Drugs originating from plant sources are known to play a key role in managing various chronic diseases, including cancer. They are considered to be potential alternatives for conventional allopathic treatment modalities 21. The present study is supported by the results of histopathological examination of liver tissues since the liver section of EAC-bearing mice showed various histopathological alternations, including a cellular inflammatory infiltration, congestion in blood vessels, hyperchromatinea, nuclear hypertrophy, debris in the central vein, hemorrhage and wide sinusoids in EAC control group Fig. 2B. Histopathological examinations of liver tissues of EAC - bearing mice treated with ELMO, recorded few lesions in protective group Fig. 2C shown a normal array of the hepatic cords radiating from the central vein, there is no appearance of cellular inflammatory infiltration, the cytoplasm is intact with normal eosinophilia, and the nuclei is similar to control ones with usual chromatinophelia. In the curative group, Fig. 2D shows reduced cytoplasmic degeneration, mild cellular inflammatory infiltration, and the nuclei of hepatic cells are better in the curative group.

CONCLUSION: Finally, since this herb showed moderate anti-cancer activity and less toxicity to major organs such as the liver and kidney, it can be advised as a prophylactic agent after appropriate validation from clinical trials.

The study results bear high relevance because this herb is available locally and may represent a convenient and cost‑effective means to cope with many types of cancer, such as breast cancer and colorectal cancers, which are the two leading causes of mortality in India. Further studies are needed to assess the active ingredients of Moringa oleifera extracts involved in the antiproliferative or cytotoxic effects. A detailed study could be conducted to show the exact molecular mechanism by which the components in ethanol extract could attain therapeutic efficacy. There is scope to explore the in-vivo anti-cancer activity of active components identified from the extracts individually as cancer therapeutics.

ACKNOWLEDGMENT: The authors thank Malwanchal University and Basaveshwara Medical College and Hospital for conducting this study.

B. Ramanath * and K. Satheesh Naik