INTRODUCTION: Inflammation is a part of the complex biological local response of living tissue to injurious stimuli. It is a body defense attempt in order to get rid of stimuli 1.

Currently available steroidal and non-steroidal anti-inflammatory (NSAID) drugs are exhibit undesired side effects and have their own limitations. Hence, it has become necessary to revisit the importance of the herbal remedies.

The anti-inflammatory activity of extracts from fruits, herbs and spices and isolated compounds has already been reported 3 and 4.

Stem and root of Sida rhombifolia L. are used to treat rheumatism, asthma, tuberculosis and sexual disorders 8. The root and leaves are known to be stomachic, demulcent, diaphoretic, diuretic, tonic and sudorific agents and used in various inflammatory conditions 9 and 10.Extracts of various parts of this plant were reported to have anti-nociceptive and anti-inflammatory 11 and 12, hepatoprotective 13, antibacterial 14 and 15, antifungal 14, antipyretic 15, cytotoxic 12 and 16, antigout 17 and anti- diarrhoeal 18  properties.

As a part of continuing search for naturally occurring cure, the current investigation was aimed to assess the anti-inflammatory effect of root of Sida rhombifolia L. in carrageenan induced acute inflammatory rat model.

Preparation of Ethanolic Extract: The powder obtained were extracted using Soxhlet apparatus with 95% ethanol. The ethanolic extract was then concentrated in a rotary vacuum evaporator under reduced pressure, temperature and preserved for further study. Solvents used were of analytical grade.

Experimental Animals: The study was conducted in 48 adult Wistar rats weighing 150-200 g. The rats were procured from Small Animal Breeding Station, College of Veterinary and Animal Sciences, Thrissur. The animals were housed in appropriate clean cages in a well ventilated room with temperature (21-24° C), relative humidity (65-68 % ) with 12 hours daylight and 12 hours dark cycle. They were maintained under identical feeding and management practices in the laboratory. All procedures involving the use of experimental animals were in accordance to the committee for the purpose of control and supervision of experiments on Animals (CPCSEA) and were approved by the Institutional Animal Ethics Committee (No. Acad [3] 6554/ 04).

Acute Toxicity Study: The acute toxicity testing of Sida rhombifolia L. root extract was carried out according to The Organization of Economic Co-operation and Development (OECD) Test Guidelines (OECD 423- Limit test procedure). Five animals and the dose level of 2000 mg/ kg body weight were used and the critical observations were made on mortality and signs of toxicity.

The per cent (%) inhibition was computed from the following formula.

Statistical analysis: The data obtained were analyzed using SPSS 17.0 software (Statistical Package for Social Sciences) by one-way ANOVA followed by student’s t test to determine the significant difference between the control and experimental groups. Results were expressed as mean ± standard error. The value of P ≤ 0.05 was considered statistically significant.

Acute Toxicity Study: There were no changes in behavior pattern and no signs and symptoms of toxicity and mortality were observed in animals treated with Sida rhombifolia L. root extracts. It was found that the animals were safe upto a maximum dose of 2000 mg/kg body weight indicating the safety of the extract studied.

Carrageenan-induced Acute Inflammatory Assay:  Carrageenan administered at the dose level of 0.1 ml of 1% w/v as subplantar injection in right hind paw of rats showed a time-dependent increase in paw thickness (Figure 1 and 2). This increase in inflammatory response was observed at 1h and was maximal at 3 h after administration of carrageenan injection in the carrageenan control group. However, carrageenan induced acute inflammation was significantly (P £ 0.05) reduced in extracts and reference drug treated groups. 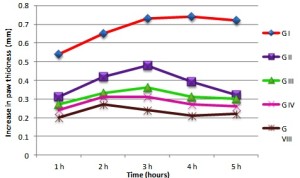 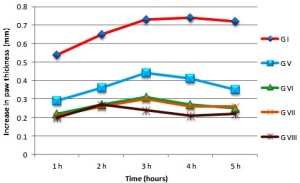 DISCUSSION: Nature has long been a major source for medicinal elements. There is a growing interest in the pharmacological evaluation of various herbal plants used in Indian traditional systems of medicine.  In the present investigation, we have studied the anti-inflammatory property of aqueous and ethanolic extracts of root Sida rhombifolia L.

Phytochemical screening of aqueous and ethanolic extracts revealed the presence of phenolic compounds, flavonoids, tannins, glycosides etc. (Table 1). The current data is in accordance with earlier reported studies 11 and 21.

In single dose toxicity studies, the  time and  mode of  death  of  study  animals  are important indication of toxic response. Rats treated withSida rhombifolia L.root extracts did not produce any toxicity indicating the safety of the extract. The current findings were in agreement with the previous safety reports on Sida rhombifolia L. extract 21 and 22.

Carrageenan, sulfated polysaccharides that are extracted from red seaweeds, is a potent chemical known to release inflammatory and proinflammatory mediators. Carrageenan induced hind paw oedema model in rats is acknowledged to be the acute inflammatory model responsive to cyclooxygenase (COX) inhibitors and has often been used to screen the effect of non steroidal anti-inflammatory drugs (NSAID), which primarily involve in inhibition of the cyclooxygenase pathway mediated prostaglandin synthesis.

Cellular and molecular mechanism of carrageenan induced acute inflammation is well exemplified. The time course of edema formation is known to be biphasic. The first phase, occurs in first few hours of injection of the phlogistic agent which has been attributed to the release of histamine, kinins and serotonin 23.

The peak edema volume occur around three hours after the injection and this delayed phase is mainly continued through release of bradykinin, protease, lysosome, leukotrienes and prostaglandin like substances 24 and 25. Prostaglandin-E2, a potent vasodilator, synergizes with other inflammatory vasodilators such as histamine and bradykinin and contributes to the redness in carrageenan induced acute inflammation 26. The prostaglandin mediated phase is sensitive to both steroidal and non-steroidal anti-inflammatory agents 25.

The current investigation demonstrated that aqueous and ethanolic extracts from root of Sida rhombifolia L.hold significant anti-inflammatory effect in the acute inflammatory model in rats. It is well known that phenolic compounds, flavonoids and glycosides are potent antioxidants. The protective effect of root extract of Sida rhombifolia L. under this investigation may be attributed to the anti-inflammatory property of steroids 7 and antioxidant property of flavonoids and phenolic compounds 27.

The observed significant anti-inflammatory activity of both extract may be attributed to the inhibition of the inflammatory mediators such as histamine, serotonin, kinin and prostaglandin. Ethanolic extract of root was found to be the most effective at medium concentration (400 mg/kg body weight) and aqueous extract shown peak activity when higher concentration (600 mg/ kg body weight) employed.

The edema inhibitory effect of extracts was highest in the delayed phase (at 3 hours) of carrageenan induced acute inflammation which opines that Sida rhombifolia L. root extract involve mainly in the cyclooxygenase pathway mediated prostaglandin synthesis. Eventhough, lipoxygenase pathway take part in the inflammatory course of action, the inhibition of cyclooxygenase pathway is more efficient in inhibiting carrageenan induced acute inflammation than lipoxygenase inhibitors 28. Previous Studies on aerial parts, flower buds, leaves and stems of Sida rhombifolia L. confirmed the anti-inflammatory activities of its fractions 11 and 13.

CONCLUSION: The results of the current study demonstrate that the aqueous and ethanolic extracts obtained from root of Sida rhombifolia L.exhibit dose dependent significant acute anti-inflammatory activity which might be due to a number of bioactive anti-inflammatory elements. Nonetheless, a profound study is necessary for isolation, structural elucidation of bioactive elements to explicate the exact mechanism of action.

These findings uphold the use of Sida rhombifolia L.plant in traditional medicine for the management of inflammatory conditions.

ACKNOWLEDGEMENT: Authors are thankful to Dean, College of Veterinary and Animal Sciences, Mannuthy, Thrissur for having provided necessary facilities to carry out the research work