ABSTRACT: A benzoin derivative of 2-Semicarbazono-1-hydroxy, 1-[2-chlorophenyl]-2-[4'-methoxyphenyl] ethane (2C4MBS) was synthesized by benzoin condensation followed by addition reaction. The structure elucidation done using single XRD studies. Maximal electroshock seizure (MES) model was used in the present study to evaluate the anticonvulsant activity of the test drugs. MES seizures were induced by an electro convulsiometer by delivering electroshock of 60 mA current transauricularly for 0.2 sec in mice using corneal electrodes. The incidence and duration of the extensor tonus were noted. Phenotyin is used as standard, synthesized drugs of 5 and 10 mg/Kg were subjected in test animals. The duration of the tonic hind leg extension phase of MES convulsions expressed as the arithmetic mean ± SE and was analyzed by one-way analysis of variance (ANOVA) followed by Dunnet′s ′t′ test. Data were analyzed using one-way analysis of variance (ANOVA), and group means were compared using the Multiple Comparison test using Instat-V3 software. P values < 0.05 were considered significant. Hematological and blood biochemical analyses also performed, and the results revealed that the synthesized drug found to be therapeutic potential.

INTRODUCTION: Epilepsy has now become the most serious brain disorder, which accounts for about 1% of the world′s burden of diseases. A number of synthetic antiepileptic drugs are available in practice; however, their effectiveness does not hold true with the entire range of population suffering from this disorder 1.

Further, a large number of drug interactions and their side effects seen with almost all current antiepileptic drugs make it more difficult to attain easy control of seizures. On the other hand, herbal medicines are widely used across the globe due to their wide applicability and therapeutic efficacy coupled with the least side effects, which in turn has accelerated the scientific research regarding antiepileptic activity.

There is still a need for broadly acting anticonvulsant drugs possessing multiple mechanisms of action with decreased adverse effect, preferably originating from synthetic products, despite the beneficial effect of currently available drugs 2, 3. In view of the need for a safe and effective drug, the present study was undertaken to evaluate the anticonvulsant effect of the 2C4MBS against the seizures induced by MES (Maximum electroshock) in mice.

MATERIALS AND METHODS: The starting material for the 2C4MBS was 2-Chloro-4′-methoxy benzoin [2C4MB], prepared by benzoin condensation. 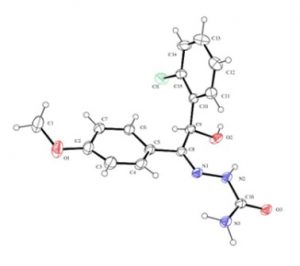 Semicarbazide hydrochloride, anhydrous sodium acetate, and 2C4MB in 5 ml ethanol were mixed in the mole ratio 2:4:1, respectively. The prepared solution was found to be turbid. Hence, ethanol was added and stirred well, and the solution was gently warmed till a clear solution was obtained 4. The product obtained was washed with hexane and purified by repeated recrystallization using ethanol. A single crystal of 2C4MBS was obtained by the slow evaporation technique. The melting point of the compound was found to be 76.5 ± 1 ºC. The synthesized compounds confirmed by Single-crystal XRD studies were shown in Fig. 1. 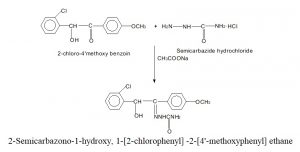 Animals used for Acute Studies: Swiss albino male mice weighing between 25 to 30 g two months old for 2C4MBS, were obtained from the animal house of Pharmacology Department, Vels University, Chennai (INDIA). Animals were housed in each cage made up of polypropylene with stainless steel top grill and maintained under standard laboratory conditions (temperature 24-28 ºC, RH, 60-70%, and 12 h light-dark cycles). The animals were acclimatized for 7 days before commencement of the experiment in standard laboratory conditions 12 ± 01 h day and night rhythm, maintained at 25 ± 3 ºC and 50%-70% humidity as per Committee for the Purpose of Control and Supervision of Experimental Animals (CPCSEA) guidelines. Animals were provided with balanced food (Sai Meera Feeds, Bangalore) and water ad libitum 5. The protocol used in this study for the use of animals was approved by the institutional animal ethics committee (Approval number: XIII/VELS/PCOL/54/2000/CPCSEA/ IAEC/08.08.2012).

Acute Toxicity Study-OECD 425 Guidelines: Acute oral toxicity test for 2C4MBS was carried out as per OECD Guidelines 4256. As with other sequential test designs, care was taken to ensure that animals were available in the appropriate size and age range for the entire study. The test substance was administered in a single dose by gavage using a stomach tube or a suitable intubation cannula. The fasted body weight of each animal was determined and the dose was calculated according to the body weight. After the substance has been administered, food was withheld for a further 2 h in mice. The animals were observed continuously for the first 4 h and then each hour for the next 24 h and at 6 hourly intervals for the following 48 h after administering of the test drug, to observe any death or changes in general behaviour and other physiological activities. Single animals were dosed in sequence usually at 48 h intervals. However, the time interval between dosing was determined by the onset, duration, and severity of toxic signs. Treatment of an animal at the next dose was delayed until one is confident of survival of the previously dosed animal.

Observation of Toxicity Signs: General behaviour, respiratory pattern, cardiovascular signs, motor activities, reflexes, change in skin and fur, mortality, and bodyweight changes were monitored daily. The time of onset, intensity, and duration of these signs, if any, was recorded.

Acute and Sub-acute Studies: In a 28-day subacute toxicity study, animals were divided into II groups. Group I that served as normal control was administered with distilled water per oral (p.o.) while group II was administered daily with 2C4MBS (5 mg/kg) (p.o.) for 28 days at different dose levels based on the acute toxicity results, respectively. The animals were then observed daily for gross behavioral changes and any other signs of subacute Toxicity. Each rat's weight was recorded on day 0 and weekly throughout the course of the study, food and water consumption per mice was calculated. At the end of the 28 days, they were fasted overnight, each animal was anesthetized with diethyl ether, following which they were then dissected, and blood samples were obtained by cardiac puncture into heparinized tubes. The blood sample collected from each mice was centrifuged with 3000 X g at 4 ºC for 10 min to separate the serum and used for the biochemical assays.

Necropsy: All animals were sacrificed after the blood collection. The positions, shapes, sizes, and colors of internal organs were evaluated. The Spleen, Testes, Pancreas, Lung, Liver, Brain, Heart, Stomach, Intestine, Bone, Ovary, and Kidney tissues were excised from all mice to visually detect gross lesions and weighed to determine relative organs′ weights and preserved in 10% neutral formalin for histopathological assessment 7. The tissues were embedded in paraffin and then sectioned, stained with hematoxylin and eosin, and were examined microscopically.

TABLE 1: EFFECTS OF DAILY ADMINISTRATION OF 2C4MBS ON BIOCHEMICAL PROFILES 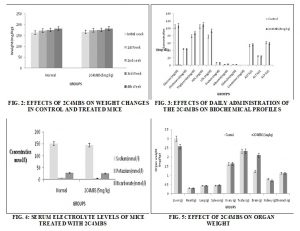 Animals from all the treated dose groups exhibited comparable body weight gain in the second half duration with that of control. Food consumption of control and treated animals was found to be comparable throughout the dosing period of 28 days. Ophthalmoscopic examination, conducted prior to and at the end of dosing period on animals from control and all the treated dose groups did not reveal any significant abnormality except liver enlargement. Functional observation tests conducted at termination revealed no abnormalities. Urine analysis, conducted at the end of the dosing period in week 4 and at the end of the recovery period in week 6, revealed no abnormality attributable to the treatment.

Organ weight data of animals sacrificed at the end of the dosing period was found to be comparable with that of the respective control. Histopatho-logical examination, it was revealed that abnor-mality in the brain was observed were shown in Fig. 4, 5, and 6, Table 2, 3, and 4.

Dose Selection and Stock Solution: On the basis of the acute toxicity results, the maximum therapeutic dose of 2C4MBS was fixed as 5 and 10 mg/kg respectively. The test drug was suspended in 2% CMC in Saline with suitable concentration (10 mg/ml) depending on the bodyweight of animals and administered orally with the help of oral gavage sleeved to syringe. Phenytoin sodium was selected as a standard antiepileptic drug and administered in the dose of 25 mg/kg.

Evaluation of Anticonvulsant Activity (MES Model): Maximal electroshock seizure model was used in the present study to evaluate the anticonvulsant activity of the test drugs. MES seizures were induced by an electro convulsiometer by delivering electroshock of 60 mA current trans auricularly for 0.2 sec in mice using corneal electrodes 8, 9, 10. The incidence and duration of the extensor tonus were noted. In this type of seizure model, the animals were divided into four groups with six animals, and the treatment schedule is as follows 11, 12.

The test animals (n = 6) received 2C4MBS (5 and 10 mg/kg) orally 30 min before application of electroshock. To evaluate the drug effect on the seizure severity, the duration of tonic hind leg extension and mortality due to convulsions was selected as the parameters 13, 14. Each animal was individually observed for 2 h after MES seizures and at 24 h for mortality. All the experimental groups were compared with the respective controls treated with vehicle orally. The results obtained were given in Fig. 7 and Table 5. 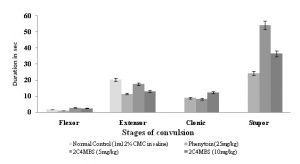 FIG. 7: ANTICONVULSANT EFFECT OF 2C4MBS ON MES IN MICE

Statistical Analysis: Values for anticonvulsant activity was expressed as "mean increase in paw volume ± SEM. The data were expressed as means ± SDs for each treatment group 15, 16, 17. The duration of the tonic hind leg extension phase of MES convulsions expressed as the arithmetic mean ± SE and was analyzed by one-way analysis of variance (ANOVA) followed by Dunnet′s ′t′ test. P-value less than 0.05 (P<0.05) was the criterion for statistical significance. Statistical analysis of acute sub values was represented as mean ± SEM. Data were analyzed using one-way analysis of variance (ANOVA) and group means were compared using the Multiple Comparison test using Instat-V3 software. P values < 0.05 were considered significant. The 2C4MBS exhibited some severe toxic symptoms and mortality at the dose level of 50 mg/kg. Hence, based on the maximum tolerable dose the one-tenth and one-fifth of this dose was considered as a therapeutic dose for evaluating further pharmacological study (Anticonvulsant activity using MES model). Since the drug is used clinically for grandmal type of epilepsy, this model was employed 18, 19. This test serves to identify the drug potency that prevents seizure spread, corresponding to generalized tonic-clonic seizures in humans. Electroshock causes the inhibition of GABA release, and this, in turn, may inhibit GABA synthesis. All animals treated with vehicle exhibited tonic hind limb extension with the electroshock of 30 mA for 0.2 sec, and the duration of hind limb extension was 20.22 ± 0.29 sec.  It has often been stated that antiepileptic drugs that block MES-induced tonic extension act by blocking seizure spread. Moreover, MES-induced tonic extension can be prevented either by drugs that inhibit voltage-dependent Na+ channels or by drugs that block glutaminergic excitation mediated by the N-methyl-d-aspartate (NMDA) receptor. Thus, our results suggest that the test drug may be effective against human generalized tonic-clonic seizures. The rate of protection was very significant at the entire 2C4MBS treated groups when compared to control 20, 21.

ACKNOWLEDGEMENT: The authors acknow-ledge Dr. Anbu, Vels University for animal studies, IIT Chennai for spectral and single-crystal XRD studies. The author also thanks the management for the continuous encouragement of research.

CONFLICTS OF INTEREST: The author does not have any conflicts of interest.

B. Thanuja * and C. Kanagam