ABSTRACT: Inflammation is a cellular reaction to injury and plays a central role in pathophysiology of a variety of diseases.Oil derived from Emu (Dromais novaehollandiae) fat, is reported to have healing property. The present investigation was performed to demonstrate in vivo anti-inflammatory effect of Emu oil using phorbol ester induced acute inflammatory ear edema model. Also, the efficacy of Emu oil was compared with Virgin Coconut Oil extracted from coconut (Cocos nucifera) which is traditionally being used in India. Acute inflammation was induced applying 20 μl of 2% Croton oil (a phorbol ester) in Swiss Albino mice inner pinna. After 2 hours, ears were treated with single application of 20 μl of Emu oil and Virgin Coconut oil. Pinna thickness was measured pretreatment and 6 and 24 hours of post treatment. After 24 hours, animals were euthanized and ear punches were collected and weighed. Peak edema was evidenced at 2 hours of croton oil application. Emu oil and Virgin Coconut oil significantly attenuated croton oil induced inflammation. Inhibition of edema was observed starting from 2 hours of post treatment and Emu oil exhibited peak reduction than Virgin Coconut oil with the maximum efficacy at 6 hours post treatment. Virgin Coconut oil showed maximum reduction around 24 hours post treatment. There were no significant differences between weights of ear punches between treatments. Our findings support in-vivo anti-inflammatory effect of Emu oil and Virgin coconut oil and also validate their use in treating local inflammatory conditions.

INTRODUCTION:Inflammation is an integral part of the complex biological local response of living tissue to harmful stimuli and a body defense shot in order to get rid of stimuli. Acute inflammation is of short duration which signifies the early response of body and resolve quickly and is generally followed by healing.

An escalation in release of pro-inflammatory cytokines, including interleukins, tumor necrosis factor, transcription factor, interferon, are bring about peripheral inflammation 1.

Clinically available steroidal and non-steroidal anti-inflammatory (NSAID) drugs are demonstrating undesired side effects and have their own limitations 2 and 3. Thus, it has become indispensible to revisit the importance of the traditional remedies.

Emu (Dromais novaehollandiae), flightless bird indigenous to Australia and its fat (adipose tissue) being used topically by Australian aboriginals since ages to treat chronic musculoskeletal disorders4. Oil extracted from subcutaneous and retroperitoneal adipose tissues by maceration and series of filtration processes 5. Prime component of emu oil is fatty acids which includes oleic acid (43–46 %), linoleic acid (9.6 %), palmitic acid (23.5 %) and linolenic acid (0.6 %) 4. It is reported to have natural antioxidants such as carotenoids and flavones 11. Modern investigations have been focused on the protective effects of emu oil on adjuvant induced arthritis 6, dermal inflammation 7 and 8, wound healing 9 and chemotherapy induced inflammation 18. Emu oil shown to have cosmetic pharmaceutical property as a moisturizer 10 and orally active in cancer chemotherapy induced mucositis 11.

In this present study, we evaluated the effect of Emu oil on acute ear inflammation induced by croton oil. Croton oil contains 12-o-tetracanoilphorbol-13-acetate, a phorbol ester that elicits inflammatory reaction 15. Croton oil induces inflammation by release of moderate amount of inflammatory eicosanoids mediated by by cyclooxygenase and 5- lipoxygenase enzymes along with primary pro-inflammatory mediators 15. So, drug Diclofenac sodium topical gel, a cyclooxygenase inhibitor employed as reference drug. Also, the efficacy of Emu oil was compared with Virgin coconut oil.

The study was conducted in 24 Swiss Albino mice of either sex, weighing 15-20 g. Animals were procured from Small Animal Breeding Station, College of Veterinary and Animal Sciences, Thrissur, Kerala. The animals were housed in appropriate clean polypropylene cages in a well-ventilated room with temperature (21-24° C), relative humidity (65-68 % ) with 12 hours daylight and 12 hours dark cycle. All animals were maintained under identical feeding and management practices in the laboratory.

All procedures involving the use of experimental animals were in accordance to the committee for the purpose of control and supervision of experiments on Animals (CPCSEA) and were approved by the Institutional Animal Ethics Committee (No. Acad [3] 6554/ 04).

The animals were randomized into four groups comprising of six animals in each group were treated as indicated in below in table 1.

Twenty μl of 2% Croton oil was applied on right inner pinna of all animals. Left pinna was smeared with acetone and kept as uninflammed control. Group I animals were served as croton oil control and left untreated. After 2 hours of induced inflammation group II and III animals were topically treated with 20 μl of Emu oil and Virgin Coconut oil respectively.

Group IV animals were treated with diclofenac gel. The Pinna thickness was measured at 6 and 24 hours after treatment. All mice were euthanized by cervical dislocation, after 24 hours and ear punches of 6 mm diameter were taken using biopsy punch and weighed.

Efficacy of emu oil was high at 6 hours of post application from then swelling reduction rate was maintained same [Figure 1]. This might be due to action of emu oil on lessening the pro-inflammatory mediators. Topically applied emu oil has been shown to reduce the levels of TNFα and other pro inflammatory cytokines 17. Repeated application of emu oil might be needed to prolong the anti-inflammatory effect beyond 6 hours. Our study is in consistent with previous study which concluded that emu oil has more anti-inflammatory property than flax and olive oil in CD-I mice 7.

However, Virgin coconut oil found to have moderate effect after 6 hours and further reduction in magnitude of swelling was noticed till 24 hours but not higher than the effect of emu oil. Similar finding has been reported using Virgin coconut oil in ethyl phenyl propiolate-induced ear edema in rats 14.

After 24 hours, collected ear punches from inflamed and treated pinna (right pinna) were weighed more when compared to uninflammed (left pinna) ear punches which are due to inflammatory response.

There was no significant difference in ear punch weight between treated groups [Figure 2]. This may be explained by the fact that normal body defense to resolves inflammation which induced for short duration. 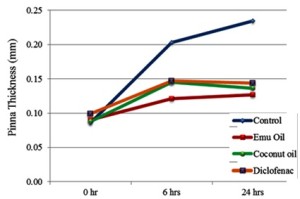 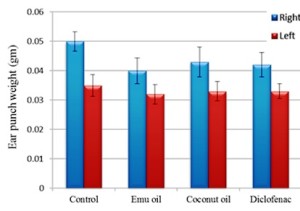 Hence, the results of the current preliminary study demonstrate that single application of Emu oil and Virgin coconut oil has promising anti-inflammatory property for minimum period and repeated application is necessary to enhance the effect. Also, Emu oil has high efficacy at 6 hours and elicit potent topical anti-inflammatory property when compare to Virgin coconut oil which is moderately effective at 6 hours. Nonetheless, a profound study is necessary to find out the endogenous corticosteroid response on induced inflammation and isolation, structural elucidation of active moiety to corroborate the exact mechanism of action.

ACKNOWLEDGEMENT: Authors are thankful to Dean, College of Veterinary and Animal Sciences, Thrissur, Kerala for having provided necessary facilities to carry out the research work.