ABSTRACT: Bacopa monnieri is a herb, known to possesses various pharmacological and medicinal properties. Aim: The objective of the study was to analyse the activity of Bacopa monnieri as an antipyretic, analgesic and anti-ulcerogenic agent. Methods: Indomethacin was used as the standard of comparison for this study. Animals were arbitrarily separated into three groups of six animals in each group. The first group was accorded saline, while the second group was administrated with the test drug Bacopa monnieri, and the third group received indomethacin. Hot plate test and acetic acid test were performed to analyze the analgesic activity of Bacopa monnieri. The antipyretic activity was evaluated by a yeast solution which was used to induce fever before administering the drugs. For the ulcerogenic activity, the rats were kept on a fast to induce ulcers and then the action of Bacopa monnieri was evaluated. HPLC analysis of the Bacopa monnieri sample was performed to evaluate the active components. Conclusion: It was possible to conclude that Bacopa monnieri showed significant analgesic, antipyretic and anti-ulcerogenic effects in experimental rats.

Earlier studies have shown that Bacopa monnieri rejuvenates the intellectual functions among children 2. Bacoside-A and Bacoside-B are known as the major active components of the herb, along with several alkaloids. Different studies have experimentally proved the pharmacological benefits of Bacopa monnieri 3. This activity could be due to the presence of saponin compounds in the plant. Several pharmacological 4, 5 and clinical studies 6, 7 on Bacopa monnieri extracts have standardized to the bacosides-A and bacosides-B have been reported significant medicinal prowess.

Our present study was aimed at evaluating the antipyretic, analgesic and ulcerogenic activity of Bacopa monnieri in standard rat models. For comparison of the effects, indomethacin was used as a standard due to it’s well-known anti-inflammatory and non-steroidal characteristics.

Fig. 1 represents the chemical structure of bacoside A. 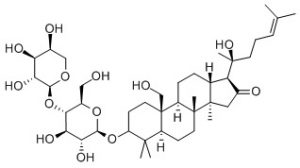 FIG. 1: STRUCTURE OF BACOSIDE A

Animals: The experimental treatment was achieved using female Wistar albino rats, each weighing around 130-140 grams. Animals were taken from Animal House, VIT University, Vellore with prior submission and clearance by the animal ethical committee (VIT/IAEC/10th/March 14th/ No.22). Animals were caged in a rectangular polypropylene cage kept on racks. Three rats were housed in each cage which is provided with paddy husk as a feeding material 8. The rats were housed in a temperature controlled room, and they were fed commercially available pellet feed and water. The animals were maintained strictly according to the guidelines provided by the CPSCEA.

Test Drug: Commercially available Bacopa monnieri was purchased from Himalaya Herbal Healthcare (Uttar Pradesh, India) and Indomethacin capsules were purchased from Sun Pharma Ltd. (Tamil Nadu, India). All the solutions required for the study were prepared fresh before each experiment. Other chemicals and reagents used were standard laboratory reagents of analytical grade and were taken from the institute’s laboratories.

Sample Preparation for HPLC: About 500 mg commercially available Bacopa monnieri powder was taken, and it was dissolved in 50 ml of methanol. The mixture was sonicated for 3 min, and then it was heated on a water bath for five minutes. After cooling, the sample was made up to 100 ml with methanol, and it was filtered through a Whatman filter paper 8.

HPLC Analysis: HPLC profiling of the Bacopa monnieri sample was performed at the School of Bio-Sciences and Technology, VIT University, Vellore, India. The sample was separated using a Shimadzu HPLC (High-Performance Liquid Chromatographic) system equipped with LC10A pump which also has SPD-M 10Avp Photodiode Array Detector or UV detector that combine with Class-VP software or LC 2010 A and LC 2010 HT integrated combined system equipped. It also has a Quaternary gradient, auto-injector in combination with Lab solution software. The chromatography system was equilibrated by the mobile phase which consisted of 0.8% orthophosphoric acid in 400 ml of acetonitrile. The wavelength considered was 205 nm, and the flow rate was fixed at 1.5 ml/min. Bacoside A was used as a reference standard.

Dosage: Based on our previously published literature, it was found that 500 mg/kg/b.w. of Bacopa monnieri produced a remarkable anti-inflammatory effect in rats. No cases of mortality were found in the rats during our entire experimentation period. On further increasing the dosage, reductions in the survival of the rats were observed. Therefore, a dosage of 500 mg/kg/b.w. was considered suitable for carrying out the tests.

Hot Plate Test: This test was performed out to examine the temperature tolerance of the animals. A temperature controlled hot plate was taken, and the temperature was maintained at 40 °C. The temperature of the plate was constantly monitored using a thermometer so that the temperature did not exceed 40 °C. Rats were kept on the hot plate individually. The threshold of pain was obtained as the rats reach the attempt to jump out of the hot plate. The total time spent by the rats on the hot plate was recorded using a stopwatch. There were three groups, one control, the second one with the test drug Bacopa monnieri (500 mg/kg/b.w.), and the third one with reference drug indomethacin (10 mg/kg/b.w., i.p). Each group had six rats, and the rats were tested 30 min after the administration of the drug. Control animals were administrated with an equal volume of normal saline (0.09%), and the experimental procedure was repeated.

Analgesic Test: This experiment was carried out using standard protocol 9. The rats were administrated an i.p. injection of 0.6% acetic acid (10 ml/kg/b.w.). The test drug Bacopa monnieri (500 mg/kg/b.w.) and indomethacin (10 mg/kg/ b.w.), were given with i.p. injection before 30 min of the acetic acid injection. After the administration of acetic acid, the rats were kept in glass cages, and the number of “stretch” was noted for each rat for the next 30 min. Any notable decrease in the stretching number by the administration as compared to control rats was observed as a positive analgesic response.

Antipyretic Test: The animals were given an injection of 10 ml/kg of 20% of aqueous extract baker’s yeast subcutaneously, and the temperatures of the rectum were observed.  Post 18 h, the rectal temperature was recorded once again before i.p. administration of, the test drug Bacopa monnieri (500 mg/kg/b.w.) and indomethacin (10 mg/kg/ b.w.). After the peak temperature, the temperature was observed for each hour up to 5 h from the treatment of test drugs as per the standard method 10.

Ulcerogenic Test: Gastric Ulcer: The rats were kept in fasting condition for 16 h before the oral treatment of the test drug. Bacopa monnieri was given at a dosage of 500 mg/kg/b.w. and indomethacin was administered at a dosage of 20 mg/kg/b.w. separately to test the ulcerogenic activity. After three hours of the administration of the test compounds, the rats were sacrificed. The stomach and intestines were dissected, and the gastric mucosa was cleaned with saline. The ulcer score was calculated as per the following scale, 0: no lesion, 1: one or two lesions, 2: severe lesions, 3: very severe lesions, 4: mucosa full of lesions 11.

Statistical Analysis: ANOVA (Analysis of Variance) was performed to find out the significance of changes between groups using Student Newman-Keul’s test by the software Graph Pad InStat version 3.10. The results obtained were expressed in the form of mean ± S.D., and then ANOVA was done. For significance, p<0.05 was taken into consideration.

Hot Plate Test: In this method, it was observed that the Bacopa monnieri treatment helped to increase the reaction time in rats and more remarkable analgesic activity was observed Fig. 6. 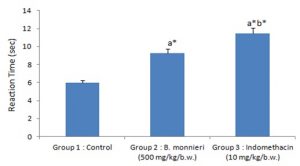 FIG. 6: BENEFICIAL EFFECT OF BACOPA MONNIERI IN HOT PLATE TEST. Each value represents the mean ± SD of six rats. Comparisons were made as follows: a-group 1 vs. groups 2, 3; b- group 2 vs. group 3. The symbols represent statistical significance at *p<0.05. Statistical analysis was calculated by one-way ANOVA followed by the Student Newman–Keul’s test.

Analgesic Test: In the acetic acid test, it was observed that Bacopa monnieri treatment, similar to indomethacin, showed that the number of abdominal constrictions or stretchings got remarkably reduced. The reduction was maximum at 500 mg/kg/b.w. dosage Fig. 7. 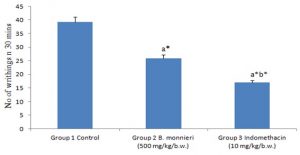 FIG. 7: BENEFICIAL EFFECT OF BACOPA MONNIERI IN ANALGESIC TEST. Each value represents the mean ± SD of six rats. Comparisons were made as follows: a-group 1 vs. groups 2, 3; b- group 2 vs. group 3. The symbols represent statistical significance at *p<0.05. Statistical analysis was calculated by one-way ANOVA followed by the Student Newman–Keul’s test.

FIG. 8: BENEFICIAL EFFECT OF BACOPA MONNIERI IN ANTIPYRETIC TEST. Each value represents the mean ± SD of six rats. Comparisons were made as follows: a-group 1 vs. groups 2, 3; b- group 2 vs. group 3. The symbols represent statistical significance at *p<0.05. Statistical analysis was calculated by one-way ANOVA followed by the Student Newman–Keul’s test.

Ulcerogenic Test: In this test, it was observed that the rats which were administered Bacopa monnieri at 500 mg/kg/b.w., had minimal gastric lesions as compared to the standard drug, indomethacin (20 mg/kg/b.w.) which showed severe gastric lesions Fig. 9.

FIG. 9: BENEFICIAL EFFECT OF BACOPA MONNIERI IN ULCEROGENIC TEST. Each value represents the mean ± SD of six rats. Comparisons were made as follows: a-group 1 vs. groups 2, 3; b- group 2 vs. group 3. The symbols represent statistical significance at *p<0.05. Statistical analysis was calculated by one-way ANOVA followed by the Student Newman–Keul’s test.

DISCUSSION: In the current pharmacological scenario, numerous drugs which are used as anti-inflammatory treatment are often associated with various pyretic and the ulcerogenic effect that results in gastric damage. Analgesic effects of Bacopa monnieri were assessed by hot plate experiment and acetic acid experiment. The acetic acid test is also known as the ‘stretching test’ or ‘writhing test’, which is a non-selective anti-nociceptive model. After intraperitoneal injection of acetic acid in rats, a response of pain and acute inflammation forms in the peritoneal region which is due to nerve endings are excited 12, and evaluation of prostaglandin levels takes place in peritoneal fluid 13. Bacopa monnieri may have helped to prevent the increase in the levels of prostaglandins, thus resulting in analgesic activity. However, everything interpreted from the acetic acid test which has not confirmed the activity of central analgesic substances.

Various studies have used this protocol after the injection of yeast and have induced the antipyretic drugs 21. It was observed that Bacopa monnieri caused a significant (p<0.05) decrease in the rectal pyrexia which is also similar to the standard drug indomethacin Fig. 8. This observation confirms the suppressive activity of Bacopa monnieri on prostaglandin biosynthesis.

Formation of the gastric mucosa is a predominant effect of NSAID (Non-Steroidal Anti-Inflammatory Drugs) 22. Studies have exhibited the ulcerogenic activity of indomethacin in an empty stomach 23. Indomethacin-induced ulceration was known to effects the glandular region of stomach 24. Indomethacin is reported to suppress the COX enzyme which is necessary for the formation of prostaglandins, but its mechanisms of gastric mucosal are yet to be discovered 25. The process of suppressing the COX-1 enzyme might result in the production of ulcers in humans which forms inhibition of selective COX-2 enzyme 26.

ACKNOWLEDGEMENT: The authors sincerely thank VIT University, Vellore and its management team for providing all the necessary resources and facilities required for conducting this entire study.

CONFLICT OF INTEREST: There is no conflict of interest between the authors.