The improvement of drug solubility is a challenging aspect of drug development process especially for oral-drug delivery system. There are various approaches reported in literature to enhance the solubility of poorly water-soluble drugs.

The techniques are chosen on the basis of certain aspects such as properties of drug under consideration, nature of excipients to be selected, and nature of intended dosage form 1. The solid dispersions along with water insoluble and swell able polymer in developing  of controlled release formulations is of great attention in recent past for enhancing drug solubility and bioavailability. The controlled-release formulations are designed to achieve a therapeutically effective drug concentration. They can also be cost-effective, posses higher efficacy and reduce adverse effects 2. In most cases, these formulations release initial large amounts of drug known as ‘burst release’. Burst release leads to high initial drug concentration and reduces the delivery system's effective lifetime. Among various approaches for controlled drug release, the matrices prepared in insoluble polymers using the SD technique are proven effective. The controlled release SD formulations can bypass the risk of burst release as the drug is homogeneously dispersed in the SD formulation. The drug dissolution is also controlled by a matrix that comprises hydrophilic or hydrophobic polymeric excipients 3, 4. Gliclazide is antihyperglycemic agent employed for the treatment of type -2 diabetics. It belongs to the oral hypoglycemics class used to control blood sugar in people suffering from type 2 diabetics 5, 6, 7. Even though the drug displays 96% protein binding capacity, its deprived water solubility makes it difficult to attain the required therapeutic effect 8-13. The current paper deals with the formulation and in-vivo bioavailability studies of controlled release matrix tablets of gliclazide SD (SDCR) for enhanced solubility and bioavailability.

Preliminary Solubility Studies: A little excess drug was transferred into a 50ml flask containing various concentrations of carriers i.e (1: 1, 1: 2, 1: 3) in distilled water. All flasks were sealed with a stopper and covered with a cellophane membrane to prevent solvent loss. The flasks were kept in the incubator shaker for 72 h.

After 72 h the content was filtered through Whatman filter paper, filtrate diluted and analyzed spectrophotometrically for gliclazide content at 230 nm 14.

Preparation of Gliclazide Solid Dispersions (SD): In this method, accurately weighed quantities of HP β Cyclodextrin in the stated proportions were carefully transferred into boiling test tubes and dissolved in acetone. To these solutions, accurately weighed quantities of Gliclazide were added and allowed to dissolve. The solution was transferred to a petridish, the solvent was allowed to evaporate at room temperature, and dispersions were dried at room temperature for 1 h, followed by drying at 65⁰C for 6h in a hot air oven. The mass obtained in each case was crushed, pulverized, and sifted through 100 mesh 14 Table 1.

Solubility Studies: Solubility studies carried out by preparing suspensions of SD and agitating for 48 h, followed by filtration. The filtrate was estimated for Gliclazide at 230 nm using UV visible spectrophotometer [15].

Pre-compression Parameters: The lubricated blend was evaluated for angle of repose, Carr’s index, bulk and tapped density, Hausner’s ratio 20-22 as per the referred procedures.

Preparation of Gliclazide SD Controlled-Release Tablets: The gliclazide SD controlled-release tablets were prepared by wet granulation method Table 2 23. Gliclazide SD equivalent to 40 mg of gliclazide in weight was chosen for formulation. This hydroxypropyl cellulose and HPMC K100 M were used as rate controlling polymers. Microcrystalline cellulose was used as the diluent; colloidal silicon dioxide was used as glidant with magnesium stearate was used as a lubricant. Accurate quantity of the Gliclazide, microcrystalline cellulose, hydroxypropyl cellulose (klucel EXF), hydroxypropyl methylcellulose (HPMC K-100M), colloidal silicon dioxide, magnesium stearate were weighed, and sieved through #40 separately. The mixture was then granulated with purified water in which povidone was dissolved. The wet mass dies in a hot air oven, and then it is lubricated with colloidal silicon dioxide, and magnesium stearate, and the lubricated blend is compressed into tablets.

In-vitro Drug Dissolution: The dissolution study of all tablets was carried out using USP apparatus II with 900 ml phosphate buffer (pH 6.8) as dissolution medium at 37±0.5ºC and 50 rpm. Aliquots of the dissolution medium were withdrawn at an interval of 5 minutes and filtered through 0.45 µm filter. The equal volume withdrawn was replaced with a fresh dissolution medium. The collected sample solution is suitably diluted and assayed against a suitable blank using a UV-visible spectrophotometer (T60 PG Instruments) at 243 nm and the drug release was compared with the pure drug 19.

Animal Preparation: Twelve New Zealand white rabbits of either sex (2–3 kg) were chosen for study and ensured that the animals remained healthy throughout the experiment. The rabbits were kept at 25°C, 45% relative humidity, and 12 h of light and dark cycles with 100% fresh air exchange and an uninterrupted power, and water supply. The animals were fed with a standard diet and water ad libitum. An in vivo pharmacokinetic study was conducted according to Animal Ethics Committee bearing no: 1722/RO/Ere/S/13/CPCSEA.

Study Design: All the 12 animals were divided into 2 equal groups. Group A was fed with gliclazide optimized formulation, and Group B was fed with a marketed product with a dosage equivalent to the weight of the animal body 26.

The plasma was separated by centrifugation of samples at 7500 rpm for 20 min, stored at −20°C for analysis.

Determination of Gliclazide in Rabbit Plasma by HPLC: 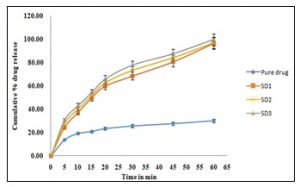 Preparation of Gliclazide SD Incorporated Controlled-Release Tablets: All the fifteen formulations of Gliclazide controlled-release tablets (F1-F15) were round in shape, white in color with smooth appearance Table 2.

The tapped density ranged from 0.512±0.31g/cc³ to 0.608±0.39g/cc³. The angle of repose of F1-F15 was good, with F15 displaying an optimal value of 24.85±0.820 having excellent flow property. The compressibility index ranged between 8 to 15 %. These findings show that all the formulation blends possessed desirable flow properties.

Physical Evaluation of Gliclazide SD Incorporated Controlled-Release Tablets: The results of the physical tests of the prepared blends were within limits. The weight variation of all the formulations is within limits.

The hardness of formulations F1 to F15 ranged between 9.0 to 11.0 kg/cm2. The thickness of all tablet formulations is uniform with values ranging between 3.3-3.5 mm.

The friability value ranged between 0.13-0.22. The drug content of all formulations varied between 96.1-99.99%, with the highest value exhibited by F15 formulation.

In-vitro Drug Dissolution Study: Due to the high viscosity of rate-controlling polymers (HPMC K 100 M and klucel EXF) used in the formulation, sustained release of Gliclazide was achieved. Formulation F15 containing a higher amount of rate-controlling polymers, exhibited the highest drug release of 99.96% up to 16h, whereas the marketed product released 98.12% up to 12 h. Hence, out of all formulations F15 is selected as the best optimized formulation and further studied for its characterization Fig. 2, 3. 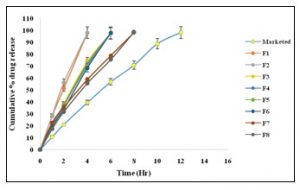 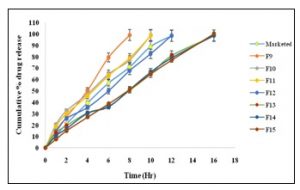 In-vivo Bioavailability Studies: The Gliclazide and internal standard (glipizide) were observed at 7.4 and 4.5 min RT respectively, without any intrusion of endogenous compounds in the plasma Fig. 4. 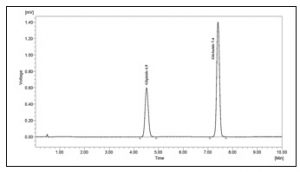 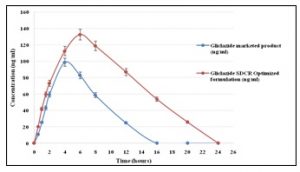 CONCLUSION: In the current research, the SD tablets of Gliclazide were formulated using hydrophilic polymer and hydrophobic polymer for controlled drug release. The gliclazide SD was prepared using HP β Cyclodextrin (1:3) and evaluated for percentage yield, drug content, and drug release. The formulation SD3 with higher values of drug content and drug release of 99% was chosen optimally for incorporating into tablet formulation by wet granulation technique. The controlled release tablet blend was initially evaluated for pre-compression parameters, and results show that formulation F15 exhibited excellent flow properties. The post-compression parameters were also found within acceptable limits. The drug release of F15 was found to be 99% extended over a period of 16h, while the marketed formulation released about 98% of the drug in 12h. In-vivo bioavailability studies of optimized formulation (F15) and marketed products are performed on rabbits. From in-vivo bioavailability studies, the Cmax of optimized formulation (132.56±0.08ng/ml) is higher than the marketed product (98.73±0.063ng/ml), Tmax of F15 and marketed product of Gliclazide was found to be 6 and 4 h respectively. AUC0-∞ infinity for the F15 formulation was higher (464.21±1.47ng.h/ml) than the Gliclazide marketed product formulation (353.8±0.82ng.h/ml). Statistically, the AUC0-t of the SDCR formulation was significantly higher (p<0.05) as compared to Gliclazide marketed product formulation. The combination of solid dispersion and application of hydrophilic and hydrophobic polymers in matrix tablets of Gliclazide can facilitate prolonged action with better solubility, bioavailability and greater patient compliance.